Long Beach Transit has proposed eliminating 31 bus stops in its service area, and the agency is looking for customer feedback before the route reductions take effect on June 26.

The bus stops being considered for removal are along routes 8, 191, 40, 91, 93, 121 and 173, according to the agency. A map of the stops slated for elimination is available here. It shows ​​10 stops on Easy Avenue in West Long Beach, nine stops on Anaheim Street in Central Long Beach and a cluster in North Long Beach make up the bulk of stops facing removal. 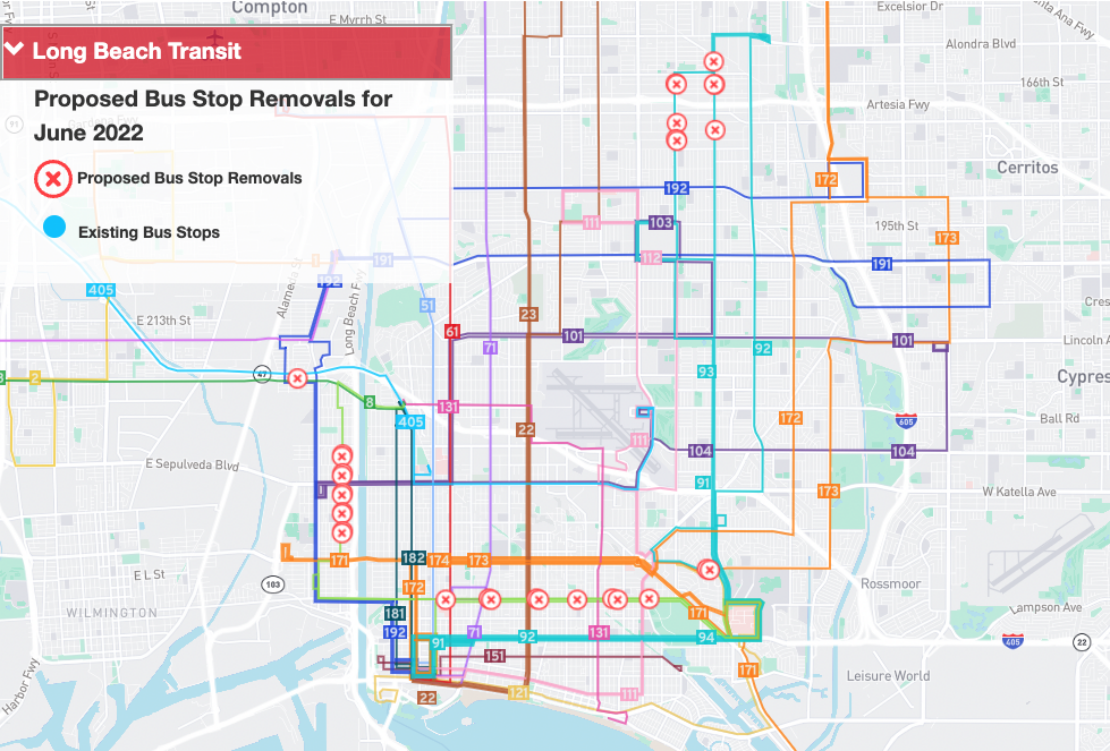 Long Beach Transit typically makes service changes three times a year—in February, June and September— according to agency spokesperson Arantxa Chavarria. Generally, in February, the changes are long-term, such as amending a route or adding more buses, and in June and September, route reductions are made to accommodate for kids being out of school, which is normal practice, she said.

“This is the first year we’re doing this,” Chavarria said, adding that changes in the Long Beach Transit routes are influenced by a 2017 analysis and reassessment on services and investments that included community input.

Chavarria said the slated June date would mark the second time in recent history that the agency proposed this amount of removals, she said. In February, Long Beach Transit originally proposed 32 removals, but after conducting community outreach, only 13 were removed.

The removals are intended to increase overall efficiency, such as decreasing wait times. They’re also meant to adhere to national standards by making the distance between bus stops more uniform, such as having about a quarter of a mile between each one, Chavarria said.

That distance between stops, ridership levels and any potential effects on Americans with Disabilities Act requirements are all things Long Beach Transit has to weigh when proposing removals, Chavarria said.

Riders can give input on the changes until June 3. After June 26, Long Beach Transit will stop servicing the final selection of stops but wait 90 days before permanently removing them, Chavarria said.

At the same time on June 26, Long Beach Transit plans to expand its services with a new route to replace the eastern half of Los Angeles Metro’s Line 130 from the Artesia Station to the Los Cerritos Center via Artesia Boulevard with the same existing bus stop locations, according to the Long Beach Transit website.

Long Beach Transit is also looking for customers to complete the survey regarding the new Route 141 here.

For questions, contact Long Beach Transit at 562-591-2301 or visit ridelbt.com/servicechanges.