With rental cars getting harder to book and popular vacation spots filling up with visitors, it’s clear that the economy is on the rise after seeing record levels of unemployment at the start of the pandemic.

People are eager to get out and spend their money, and companies are struggling to keep up with the demand, says Seiji Steimetz, professor and director of the Office of Economic Research at Cal State Long Beach.

It’s a great problem to have, given the devastation the pandemic brought on last year, Steimetz said, but data is showing that the recovery is leaving behind low-wage workers.

Steimetz provided a snapshot of where the regional economy currently stands during a recent Zoom meeting hosted by Councilman Rex Richardson.

Long Beach was experiencing historical lows in the unemployment rate before the pandemic. The unemployment rate in January 2020 was 5%. In April, when the virus quickly began to spread and governments enacted stay at home orders, unemployment rose to 19% and about 30,000 jobs in Los Angeles County disappeared within months, according to Steimetz.

New unemployment numbers show a positive change with more people returning to the workforce just as the June 15 deadline to remove most of the COVID-19 restrictions is weeks away. In April this year, the unemployment rate remained at 11.5%, and there are signs that it will only improve, according to Steimetz as face-to-face service industries like restaurants and hotels are rapidly expanding.

But the growth hasn’t been equal across all economic groups. There is a disproportionate economic recovery throughout California, and though Steimetz didn’t present numbers specifically for Long Beach, he said cities tend to follow statewide trends even though the numbers may vary.

At lower income levels—employees that make under $27,000 a year—the employment rate is 37.2% lower than what it was in January last year.

“We still have an issue here with getting people in this lower bracket back to work,” Steimetz said. 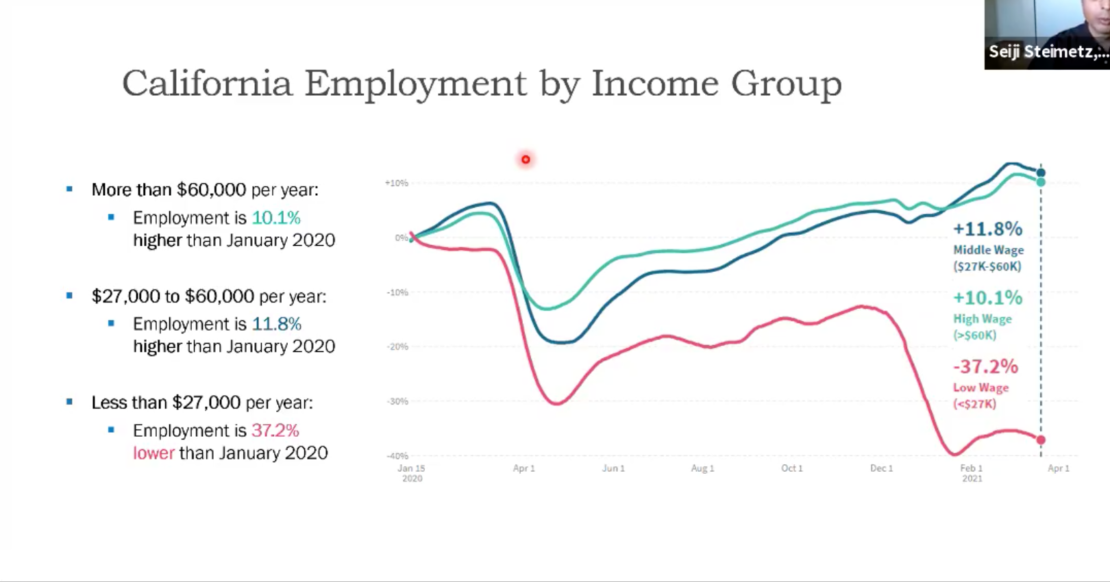 In this screen shot of a May 27, 2021, Zoom presentation, California is seeing a divide when it comes to a post-pandemic economic recovery. Low-wage earners are seeing low employment numbers. Courtesy graph Seiji Steimetz CSULB.

Steimetz explained that there are many factors that play a role in that disparity. One of the more common arguments is that unemployment benefits are far greater than working wages. Though Steimetz said economists don’t have a unified consensus on this issue, some cases may seem plausible.

For example, a single mother with children staying home for online school may continue to use unemployment benefits in order to stay home and help her kids with school work.

David Sanchez, owner of Patricia’s Mexican restaurant in Bixby Knolls, said he intends to use upcoming COVID stimulus funding from the federal government to hire people who will no longer have access to unemployment benefits.

“We’re going to use that money to hire,” Sanchez said during the Zoom meeting. “There are going to be people coming back into the workforce. Right now it’s very difficult to find help or to hire new help, so I think for the most part that money is going to be used to hire new employees.”

Another argument, one Steimetz believes is a more realistic example of what is happening, is the slow recovery small businesses have to make in order to catch up to bigger companies where employers could work from home.

An example of that would be a small rental car company, in which the business owner may be more concerned about buying back cars to rent out first before hiring new personnel.

The city is hoping to set aside federal funding it received from the American Rescue Plan in order to address the widening gap in the economic recovery.

In March, the Long Beach City Council approved a proposed plan called the Long Beach Recovery Plan to spend $153 million expected to come in through the federal American Rescue Plan. Councilman Richardson said economic support needs to be greater in North, Central and West Long Beach, where there are more low-income communities of color that were disproportionately impacted by the pandemic. The rate at which the local economy is recovering is mirroring that irregular impact.

Budgeted into the Long Beach Recovery are initiatives and policies Richardson said would help lay down a game plan in advance of the expected federal funding in order to help these communities.

Approximately $7.5 million is expected to fund these initiatives that address historic economic inequities, such as down payment support for new homeowners, workforce development and small business support.

It is not yet clear when the expected money would be available for the city to use, but Richardson said it should be distributed equitably.

“Recovery in Downtown and in the airport area is focusing more on innovation,” he said, “but in Central, West, and North Long Beach it’s about putting systems in place that help reverse the longstanding systemic issues these lower-income communities have been facing.”