The Ensemble Real Estate Investment project on Pacific Avenue between Third and Fourth streets consists of 271 units in one eight-story building, a reduction from the company’s previously approved project for the same location. In 2019, the commission approved Ensemble’s proposal for 345-units in two buildings—of 23 and eight stories.

“We didn’t intend to modify these entitlements but this was done in response to COVID to create more outdoor spaces,” Tyson Sayles, who oversees Ensemble’s multi-family and mixed-use properties, said during the meeting. “The market has changed—we see a lot more emphasis for sidewalk seating, people preferring to have more outdoor space and less preference for living in high-rises.”

Other amenities include a dog park, a fitness lawn, an eighth-floor club room and outdoor deck areas with barbecue, seating, fireplace and shuffleboard. On the third floor, the project features multiple courtyards, a fitness space and a pool area with a deck.

While the project consists of a single structure, it is designed to appear as two separate structures and includes a nearly 4,900-square-foot public paseo through the building.

With its smaller profile, the amended project fully complies with the city’s Downtown Plan, meaning no environmental review is required, according to city staff.

Both the initial and amended project applications were submitted prior to the passage of the city’s inclusionary housing policy, which requires new developments to set aside 11% of rental units for affordable housing and 10% of for-sale units. 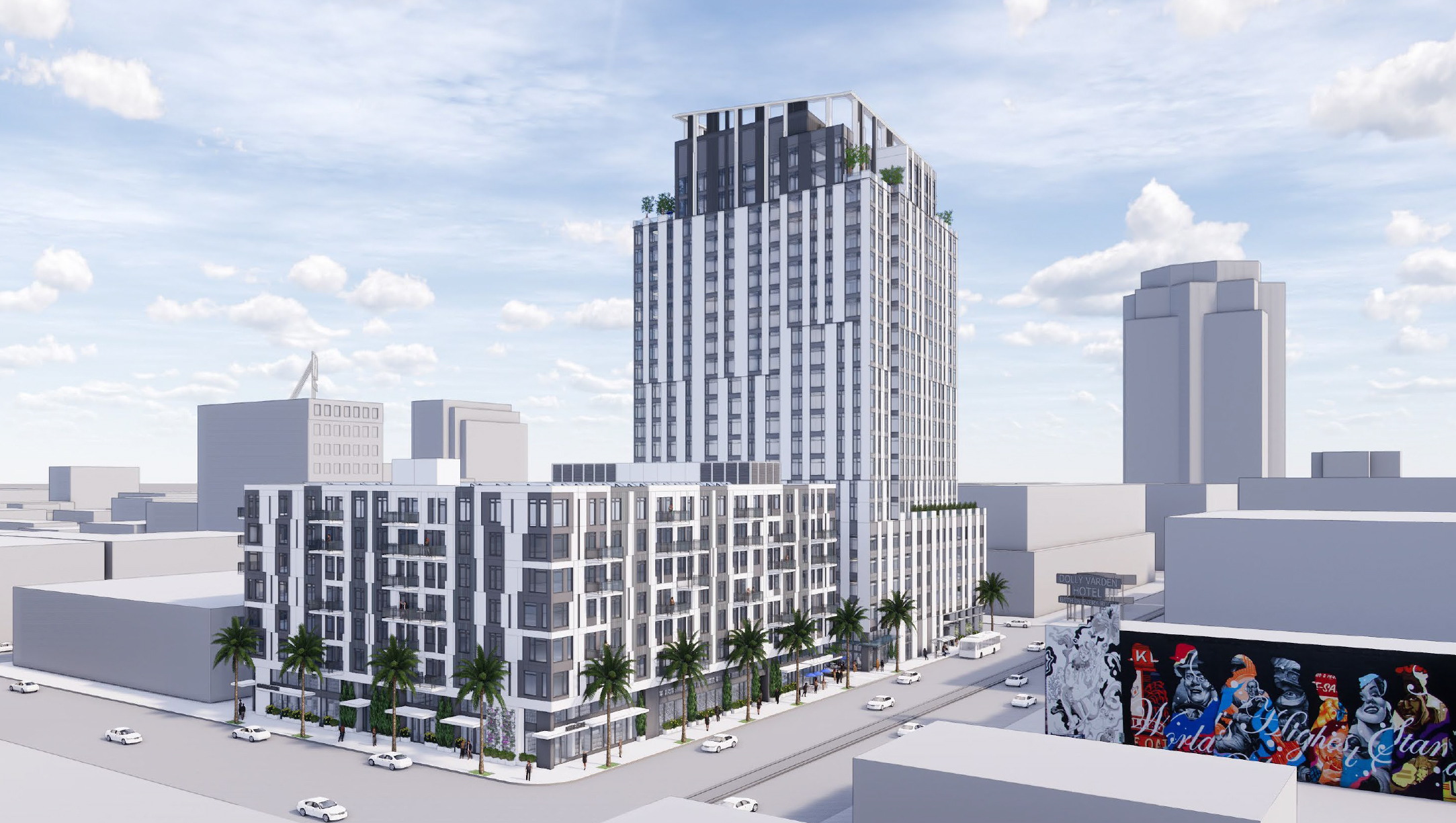 Ensemble’s previously approved iteration of its project for Pacific Avenue between Third and Fourth streets. Rendering courtesy of the city of Long Beach.

The North Pine Neighborhood Alliance submitted written opposition to the project ahead of the meeting on the grounds that it does not contain any affordable units. The group’s secretary, Leanna Noble, also spoke against the project during the meeting.

“Ensemble has addressed many of our neighborhood concerns but this continues to be a residential development that is going to lead … to building-wide evictions in our neighborhood because landlords are raising rents to keep pace with the high rents that are going to come with this development and similar developments,” Noble said. “Rents have skyrocketed because of these kinds of developments.”

Noble urged the commission to use its role in project approval to make sure neighborhoods do not continue to be “destroyed by gentrification.”

“Please help us keep our residents in their homes,” she added.

The Downtown Long Beach Alliance also filed comment ahead of the meeting, voicing its support of the project. The letter said the proposal aligns with the business district’s goal of increased density near transit in Downtown, adding that the retail and outdoor areas will contribute to the neighborhood’s character.

“At the end of the day,” Sayles said, “we think we have a much better project.”