A significant portion of a light rail line connecting Artesia to Los Angeles could be completed before the end of the next decade under a policy adopted by the Los Angeles County Metro Board of Supervisors Thursday afternoon, but access to Los Angeles will likely be pushed to 2043.

The 19.3-mile West Santa Ana Branch light rail line will connect the city of Artesia to Union Station while crossing through other Southeast Los Angeles cities like Bellflower, Downey, South Gate and Huntington Park. The line would allow those communities to access Los Angeles without using a car, and would also let residents of other cities like Long Beach to access those cities via rail.

The line’s swelling $8 billion price tag has delayed its originally proposed completion date of 2028, as it was one of the core projects identified by Mayor Eric Garcetti when he outlined the 28 projects he wanted to complete prior to the 2028 Olympics coming to LA.

Last month, board members led by Los Angeles County Supervisor Janice Hahn called for a sped-up timeline for completing the project after being told it could take until 2053 to construct.

The Metro vote Thursday initiates a process to build a 14.8-mile segment of the track that will end at the Slauson Station, where it could link up with the A Line (the former Blue Line), as soon as 2033. The remaining 4.5-mile section that would connect to Union Station still has to undergo community outreach and environmental analysis but could be completed by 2043.

Hahn proposed a motion Thursday that would speed up Metro’s efforts to find governmental and private funding to close the roughly $6 billion gap that currently exists. Hahn said the Metro cannot and won’t expect tens of thousands of residents to transfer to the A Line (Blue Line) every day to continue on to Downtown.

She won assurance that the rail will be completed to take passengers through to Union Station in Downtown Los Angeles, or else the project won’t be considered complete.

Hahn’s motion also asked Metro to deploy a rapid bus transit service between the temporary end of the line at Slauson to Union Station to alleviate future strain on the Slauson Station.

Connecting the Southeast LA communities to Downtown Los Angeles has been framed as a transportation issue as much as an equity and environmental justice issue. The cities that the West Santa Ana Branch would run through have high percentages of minority residents and high poverty rates. 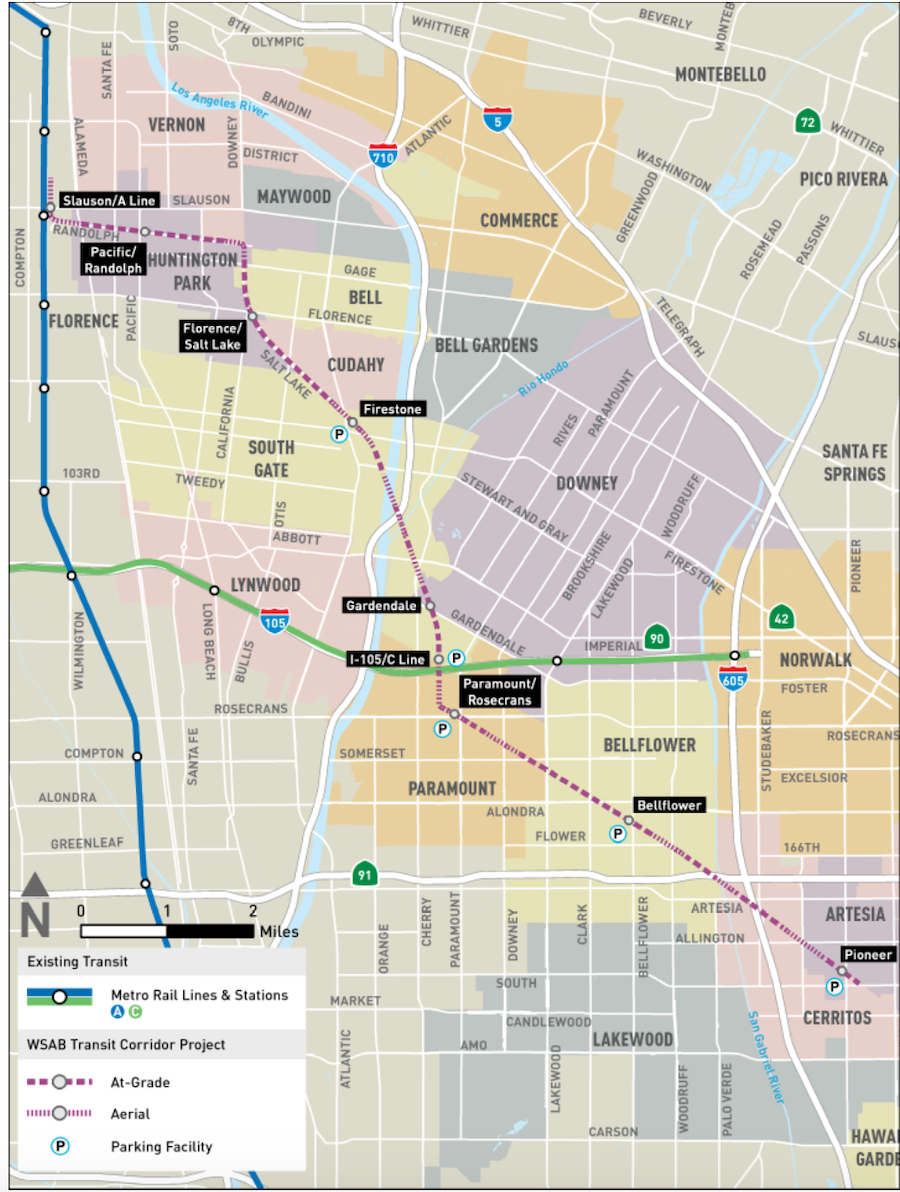 A screenshot of the proposed West Santa Ana Branch light rail line segment that would end at the Slauson Station.

They’ve also been subjected to pollution created by diesel trucks and other warehouses in the region. There’s hope that the project could be propped up with funding from the Biden Administration’s “Justice 40 Initiative” that aims to deliver 40% of the benefits of federal investments in climate and sustainable transportation to disadvantaged communities.

Metro currently has about $2 billion put aside for the West Santa Ana Branch and building a line to Slauson is projected to cost $4.9 billion, according to Metro documents.

Long Beach Mayor Robert Garcia and Assemblywoman Cristina Garcia, two of the candidates vying to represent the area in Congress, spoke to the importance of the line being completed. Mayor Garcia said the line is “the most important rail project in California” while the assemblywoman said the project could not only help residents get to and from work, but also speed up goods movement from the ports.

“I want those goods to move and move efficiently and the best way to do that is to help us get out of our cars,” Assemblywoman Garcia said.

Community members showed broad support for the project, but many were critical of the timeline for its full completion being pushed back as far as 2043.

“I’m 45 years old, by the time this thing is done I’ll have one foot in the grave,” said one caller from South Gate. “You guys need to morph into Superman and figure out how to lift and push this project to the finish line.”

Other speakers from the Little Tokyo area said they supported the project but asked Metro not to construct the final segment of track that will connect the West Santa Ana Branch to Union Station above ground.

They said putting an above-ground segment through Little Tokyo would both separate residents from one of the largest Buddhist temples in the area and could create safety issues.

A version of the line could wrap around Little Tokyo instead of going through it and Metro staff is expected to begin discussions with Downtown neighborhoods as soon as March about future station locations and to evaluate if completing the line underground could be cheaper.

Groundbreaking on the West Santa Ana Branch could begin as early as 2023.