A 17-year-old girl from El Salvador who is six months pregnant estimates she’s spent about 30 days at the Long Beach Convention Center, where federal officials are holding hundreds of minors who arrived at the border without their parents.

“I am really sad being here,” she says. “It’s hard being here while I’m pregnant.”

At the border, she says, she was separated from her cousin before being brought to Long Beach where her bed is in an area with 27 other children.

The girl says she gets to call her mother or aunt in El Salvador twice a week for 10 minutes. She occasionally meets with her immigration case manager. She attends English classes and plays outside in the afternoons.

The unnamed girl’s account, contained in court papers filed Monday by immigrant-rights attorneys, gives a rare glimpse inside the Long Beach Convention Center after its transformation into emergency housing for migrant kids.

Since the center opened on April 22, federal officials who are running the facility have tightly controlled who is allowed access, barring almost all media as more than 1,200 unaccompanied youth have passed through or are still waiting to be reunited with a relative or sponsor in the U.S.

Long Beach agreed to lease the Convention Center to federal officials through early August as more children began arriving at the southern border. Nearly 60,000 came to the U.S. between February and May, many fleeing violence or poverty in their home countries, according to the Associated Press. The number of kids arriving to seek asylum has since begun to decline.

But as of May 31, over 17,000 of these children remained in the care of the U.S. Health and Human Services Department, which is responsible for placing them with relatives or sponsors. A June 4 report from the department’s Office of Refugee Resettlement said more than 8,000 of those kids were at emergency intake sites like the one in Long Beach.

Those sites were meant to hold children for only a week or two until they could be reunited with family or sent to a more stable facility, the Associated Press reported. But many children have languished at these facilities beyond what is allowed under a settlement agreement governing how they are to be treated, according to attorneys for the Center for Human Rights & Constitutional Law, which has been monitoring the children at migrant centers across the county.

In a lengthy court filing Monday, attorneys for the group said Long Beach is an example of above-average conditions compared to massive facilities for the children like the Fort Bliss Army base in El Paso, Texas, where 300 to 600 children in “exceedingly close quarters” spend most of the day sleeping out of boredom with virtually no education, no legal assistance, scant recreation, no mental health services and “virtually no personal privacy for weeks on end.”

In fact, in an email included in the court documents, Center for Human Rights attorney Carlos Holguín asked a Justice Department official if the Office of Refugee Resettlement was “willing to prioritize placement at Long Beach and other smaller emergency and reserve placement at Fort Bliss as a last resort.”

Overall, however, the group said it is “increasingly concerned about the prolonged detention of thousands of children in unlicensed, standardless” facilities that are “inherently incapable” of properly caring for children, including the Long Beach Convention Center when hundreds of beds in licensed shelters are going unused.

Hundreds of children have spent months living in these emergency centers, and more than 2,000 have spent at least 40 days in them, according to the advocacy group’s court filing.

Long Beach officials have touted the Convention Center as a facility that quickly reunites children with their families, with more than 800 already passing through, something Mayor Robert Garcia called “incredible progress” in a Tweet thanking the nonprofit Immigrant Defenders Law Center for representing kids at the facility. 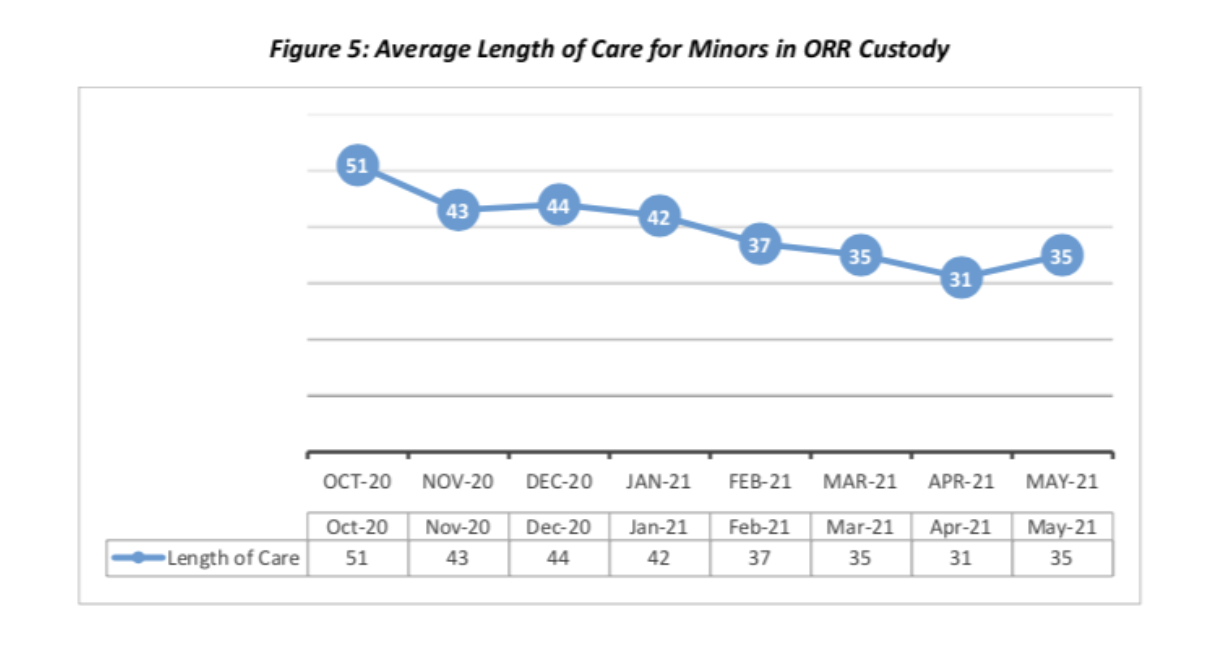 And in May, the report says, the Health and Human Services Department was discharging children faster than they arrived for the first time in at least six months. 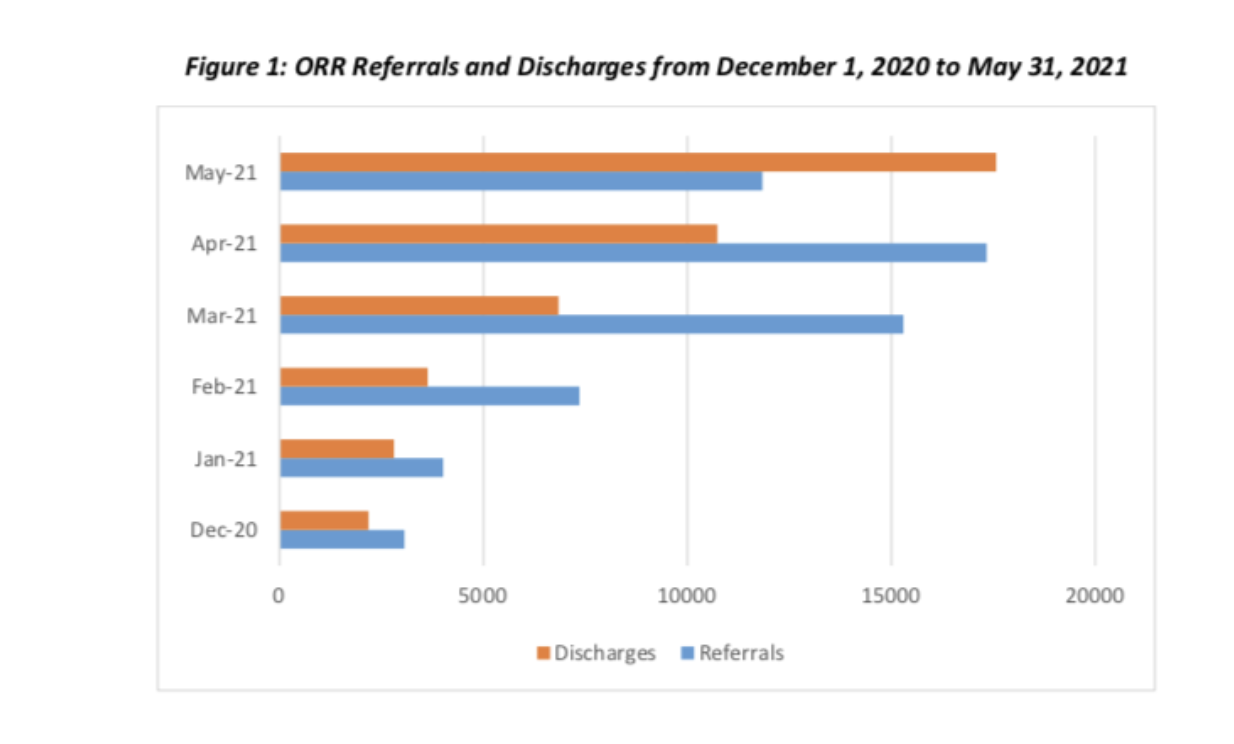 Federal officials wrote that they’ve sped up reunifications by expediting the release of vulnerable children unless there are red flags of possible abuse or neglect at their new home or if authorities must perform a detailed home study as they’re required to when the child being placed is disabled, has been previously sexually abused or is a victim of human trafficking.

Long Beach has hosted a large number of “tender age” children compared to other facilities, according to court documents, with 347 kids under 12 years old as of May 14. Of those, 92 spent between 20 and 29 days at the facility before being reunited with a family member or sponsor, according to the advocacy group, which has been allowed to visit facilities around the country. 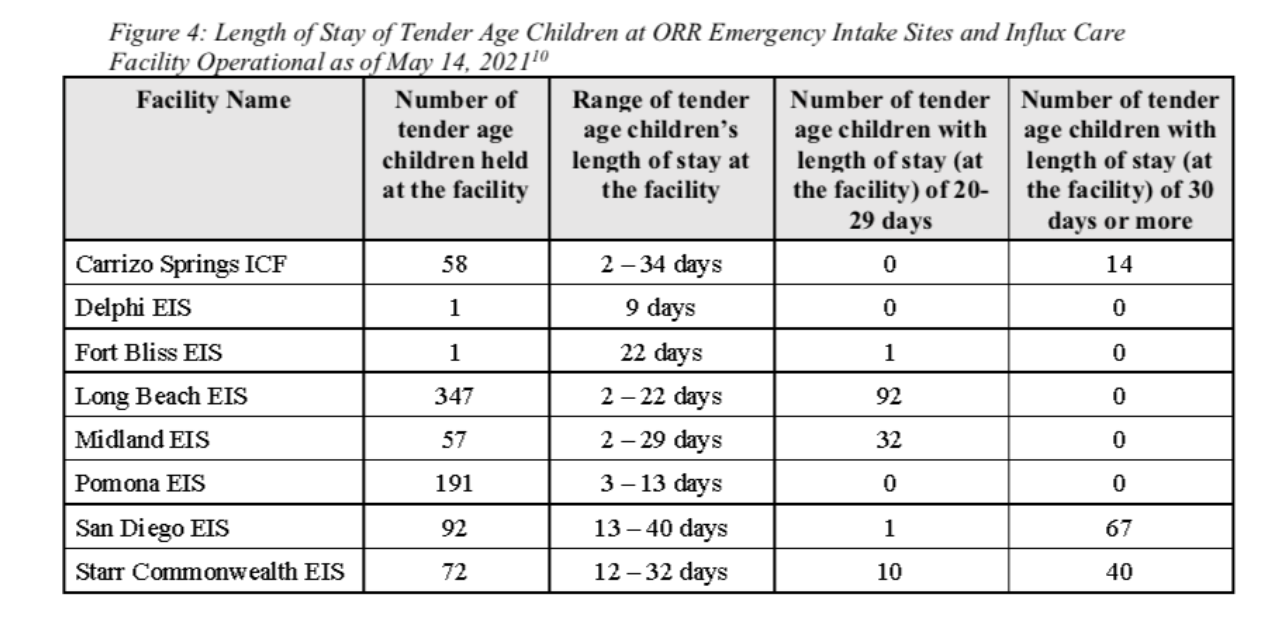 Some—including a 5-year-old, two 6-year-olds and a 7-year-old—had spent 32 days at the Convention Center as of last month, the group alleges.

“There is no apparent reason why these tender age children could not be quarantined, tested for Covid, and placed in transitional foster homes in well under 20 days,” the advocates wrote in court filings. Pregnant teens, too, are supposed to have priority for foster-care placement, the group says.

The unnamed 17-year-old in the group’s court filing says she’s getting the medical care she needs for her pregnancy at the Long Beach Convention Center. But, because of her pregnancy, it was “very hard” to keep down the food they were giving her when she first arrived.

Some staffers, she says, talk with the youth at the facility, but others just do their job without much interaction.

“I’ve asked for clean clothes but haven’t gotten them,” she says. “I asked for pants because my legs were cold and they said I’ve get them [sic] but I never did. When I ask for certain things, sometimes I never get it and then I get tired of asking so I give up.”

She’s waiting for her father’s cousin to be approved as her sponsor in the U.S. despite the fact that he’s twice submitted his paperwork.

“I am very close to him because he used to visit me a lot in El Salvador,” she says. “He lives in Los Angeles but he hasn’t visited. I think if he visited and then I saw him leave while I still had to stay here, it would be very painful for me.”