An 18-year-old woman who was shot in the head by a Long Beach Unified School District safety officer while inside a car being driven from the scene of an earlier altercation was on life support today, with her family saying she is brain dead and will not survive.

Mona Rodriguez, 18, was shot shortly after 3 p.m. Monday in the area of Spring Street and Palo Verde Avenue, near Millikan High School. Long Beach police said they responded to the scene in response to a reported shooting, and officers found the woman wounded. Police said she had been shot in the upper body, but her family said she was shot in the head.

According to police, an unidentified LBUSD school safety officer was driving in the area when he observed the woman involved in an altercation with a 15-year-old girl in the street. Investigators also determined an 20-year-old man and a 16-year-old boy were involved in the dispute, though their level of involvement was not immediately known.

When the woman, the man and the boy attempted to leave the scene in a vehicle, the school safety officer approached the car and fired into the vehicle as the driver was pulling away. Video of the shooting posted online appears to show the unidentified officer firing at least two shots at the car.

Millikan High School confirmed in a statement that no students were injured in the shooting. Investigators determined the woman, identified by the family as Rodriguez, initiated the original altercation and that she and the 15-year-old girl “are known to each other,” though the motive for the altercation was unknown, police said.

Relatives said Wednesday that Rodriguez is brain dead and will not survive, although she remained on life support as the family said its farewells. She is the mother of a 5-month-old boy.

Rafeul Chowdhury, Rodriguez’s boyfriend of two years and the boy’s father, got emotional outside Long Beach Memorial Medical Center, saying, “I want justice for my girl, my baby momma, the love of my life.” 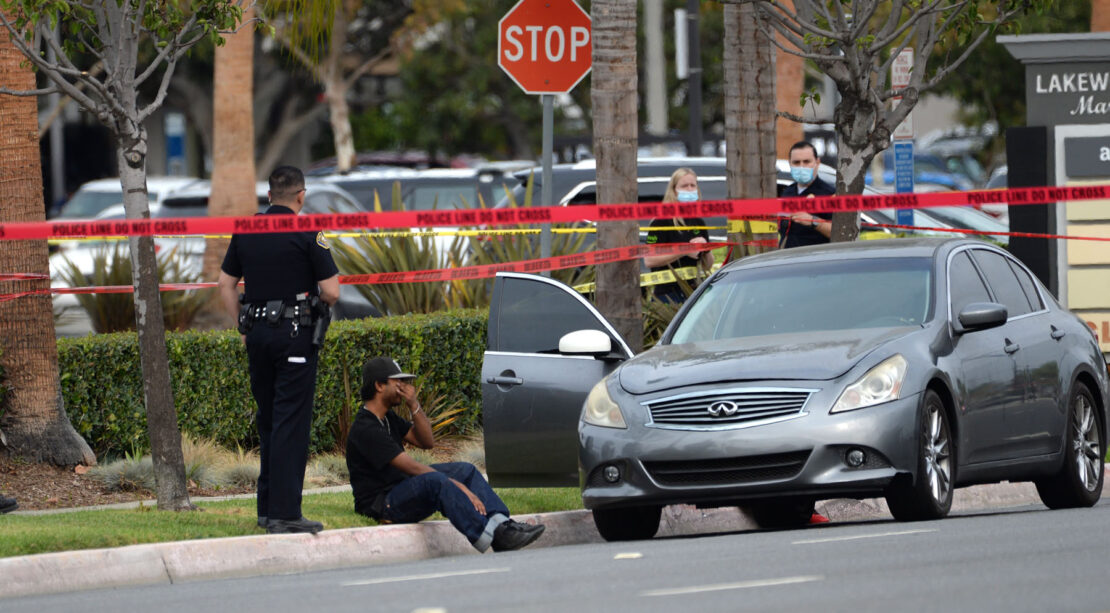 Rafeul Chowdhury sits on the curb shortly after a shooting Monday where his girlfriend was wounded by a school safety officer near Millikan High School. Photo by Stephen Carr.

Asked what he would say to the safety officer who shot Rodriguez, Chowdhury said, “I just want him in jail, bro,”

Family spokesman Najee Ali said the safety officer had no excuse for shooting into the car.

“I want to know, where is the outrage?” Ali said.  “Where is the concern from the mayor of Long Beach, from the City Council people, from the leaders. I’ve been at this hospital from the very moment I heard that she was shot in her head, to try to support and help the family. I’ve been here. I have not seen the mayor, city council, our elected leadership show any concern for the victims.”

School district officials said in a statement that their safety officers are highly trained and “held accountable to the established standards in their profession.”

“Those standards will be used to assess the incident that occurred yesterday,” Superintendent Jill Baker wrote Tuesday.

Long Beach police and the Los Angeles County District Attorney’s office are both investigating the shooting. The school safety officer who fired the shots has been placed on leave.

Rodriguez’s family has established a GoFundMe page to assist with funeral arrangements. The page states that Rodriguez is also survived by her mother, four brothers and a sister.

[Editors note: The story has been updated with new information from the LBPD about Chowdhury’s age. The department originally said he was 18-years-old, he is 20. ]