The Boeing Company is preparing to sell about 78 acres of land north of Long Beach Airport, which has served a number of commercial and defense uses over the decades.

A 1981 sales agreement between the City of Long Beach and McDonnell Douglas Corporation—which passed to Boeing in 1997—included a provision for the city’s right to first refusal. Last night, the Long Beach City Council voted unanimously to waive all rights to the property, allowing Boeing to pursue other buyers. 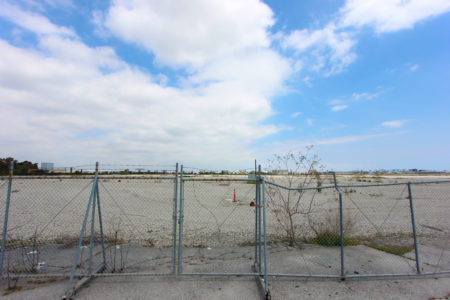 About 54 acres of vacant land north of Long Beach Airport is to be sold by Boeing in the coming months, the company announced. Photo by Brandon Richardson.

“Boeing is taking steps to reduce underutilized space,” according to Boeing spokeswoman Kimberly Kelly. “This has been a pre-planned sale and part of our phased and ongoing effort to prudently manage our business, properties and resources.”

The property is rare in a city where land is a premium and there are few large open spaces left.

About 75% of the site is located in Long Beach, with the remainder of the property located in Lakewood. For Boeing, the site most recently served as a commercial delivery center, Kelly said. Today, the Long Beach portion sits vacant but for an overgrowth of weeds, while TNT Self Storage Management operates Paramount Carson RV & Boat Storage on the Lakewood parcels.

Boeing declined to comment on potential buyers or its selection process. However, two likely candidates include Irvine-based Sares-Regis Group and Australia-based The Goodman Group, both of which have purchased large, nearby properties from Boeing around the airport.

In January, Sares-Regis completed construction of its final buildings as part of its 191-acre Douglas Park development, all former Boeing property. In 2017, as part of Douglas park, the company completed Pacific Pointe East, which consists of nearly 500,000 square feet of industrial building space. The new sale site is about three times the size, which could allow for the construction of more high-demand industrial space.

Last year, Boeing sold its former C-17 production site to global property firm The Goodman Group, which has its North American headquarters in Irvine. The C-17 site consists of approximately 90 acres on the airport’s westside along Cherry Avenue. Though development plans have not been finalized, Goodman has begun demolishing existing structures on the property.

Both Goodman and Sares-Regis declined to comment on any potential interest in purchasing the property. 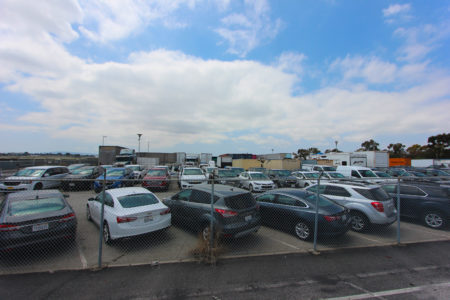 Nearly 20 acres of land to be sold by Boeing is located in Lakewood. The site currently home to Paramount Carson RV & Boat Storage. Photo by Brandon Richardson.

“Long Beach has recently become home to the future of space launch and advanced manufacturing,” 5th District Councilwoman Stacy Mungo said. “With a steady supply of engineering talent from nearby universities, this 78-acre site is a once-in-a-lifetime opportunity for the next great company to call Long Beach home.”

“I am excited for it to become another job center for high-paying jobs,” she added.

Keisler noted that the city expects the property to sell for much for the last year’s appraised value. He explained that Goodman purchased the C-17 site for more than $2 million per acre, which means the new listing could sell for around $156 million.

“Boeing maintains its strong presence in Long Beach and will continue operations out of our Douglas Park location,” Kelly said. “We remain active and committed to the California communities and neighborhoods in which we live and work.”