More than 200 elegant tern chicks scooped out of the water; rescuers need help

Bird rescuers are now caring for more than 200 elegant tern chicks that were startled off their nesting site last week near the Long Beach Harbor, possibly by boaters or fireworks, officials said.

The chicks are falling into the water from their nesting site, according to officials from International Bird Rescue in San Pedro. The organization says more chicks are likely on the way, and officials are asking the public for financial support and volunteers as the need increases.

Elegant terns, which commonly live along the California coast, are a “near threatened” species that are colonizing on two anchored barges a couple of hundred of feet apart from each other in the Long Beach Harbor.

The colony has 3,000 to 4,000 adults, and with a restricted range and few nesting areas, the birds are vulnerable to disturbances.

“They keep stumbling off the barge because that’s what they’re used to doing typically when they’re on a colony on the beach,” said Russ Curtis, a spokesman for International Bird Rescue. “They are getting ready to fledge, and they’re gonna fly off and explore a little bit, but when they fall down into the water two to three steps off of that barge, there’s just no way for them to get back up.”

The young elegant terns will form a cluster that the parents will go out and forage for, but they can’t be fed if they’re not together. The adult birds can’t get to them in the water, he said.

“Just like any kid, they wander off in places that they shouldn’t be, and that’s where they ended up on that edge of that barge,” Curtis said. “They’re just little babies, so they just haven’t figured it out.” 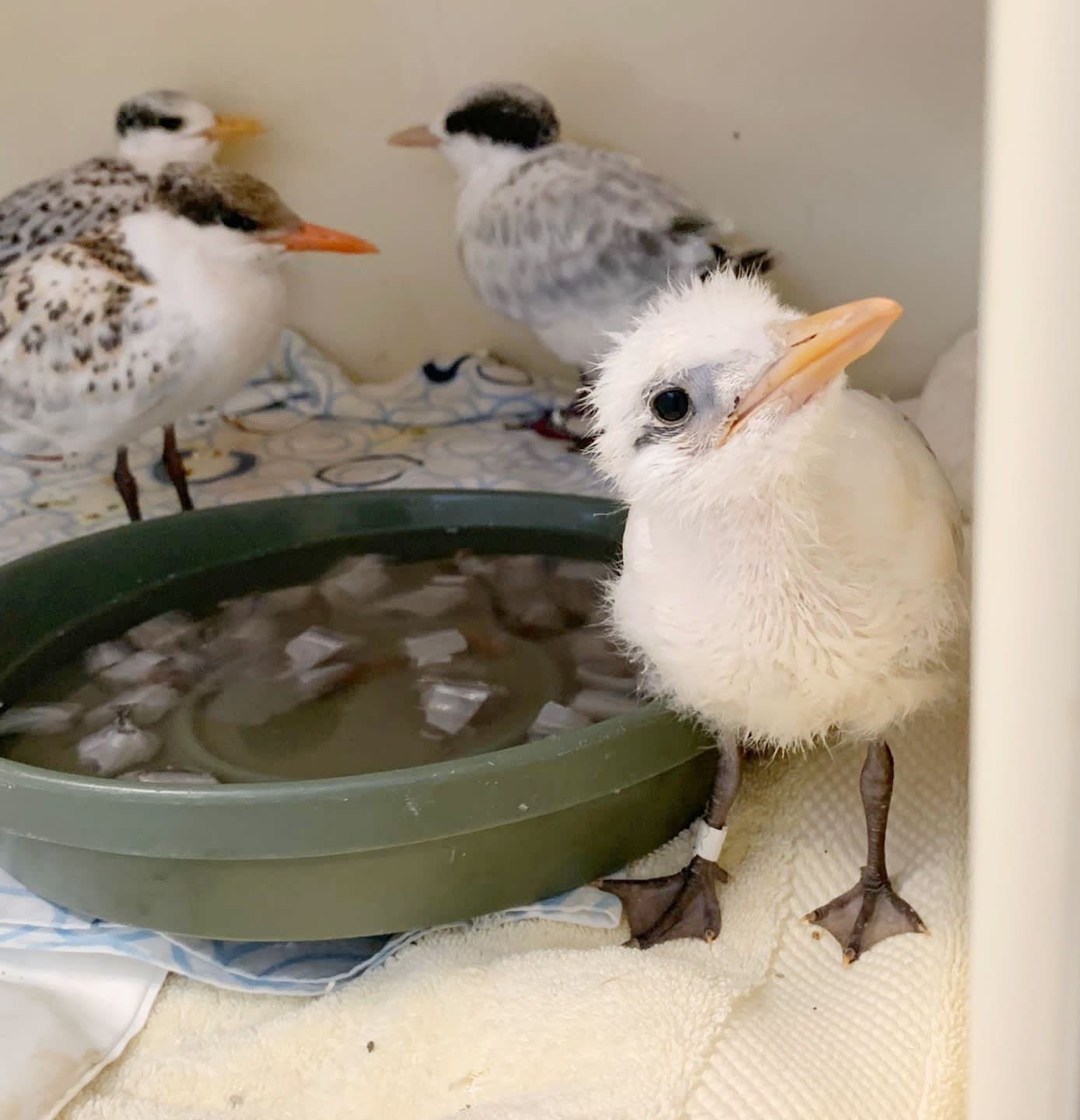 Rescuers are retrieving birds from the water—scooping them up with a net—and transporting them to their bird clinic. At the clinic, the young birds are then evaluated, dried, and warmed to stabilize their condition.

They’re then hand-fed, demanding a great deal of staff time, officials said. On Sunday, staffers were busy early in the morning collecting sand to line the bottoms of the birds’ enclosures because they have sensitive feet and need a softer natural surface to prevent foot injuries.

In Southern California, there are only two other nesting colonies in San Diego and at Bolsa Chica, Curtis said. Beyond that, they nest on two islands in the Gulf of California (Sea of Cortez), Isla Montague and Isla Rasa in Mexico.

Currently, International Bird Rescue has at least eight staff members and upwards of 12 volunteers, Curtis said they can use more help.

The organization is working closely with partner agencies, including the California Department of Fish and Wildlife, to figure out a practical and immediate plan to prevent the problem from continuing and get these chicks back to their parents. He said they might need to build a platform on the barge to allow the chicks to hop back on, but the solutions are still unclear.

Since last week, he’s asked boaters to ride calmly in the harbor as it may exacerbate the danger of the chicks stuck in the water. The organization is also putting out an urgent call to the public for donations to help feed and house these seabirds.

Generally, the species nests on sandy beaches or lagoons, which are flatter inclines. Curtis suspects the elegant terns chose these barges for nesting colonies because it’s far away from non-aerial predators.

“This is a difficult spot,” Curtis said about the barges, “but there’s not many spots left on the West Coast. Birds have been pushed out of spaces because of human encroachment and human activity.”

Editor’s note: This story was updated to clarify a misstatement that the barges are hooked together. The barges are actually hundreds of feet apart.