I love Halloween and the accompanying trappings of the last couple of centuries, including this one. I get a charge out of costumes that go over the edge, more horror-movie marathons that I have time to watch on more platforms than I can access, the decorated houses that give Christmas a run—screaming, in some cases—for its money (BTW, catch a bunch of them on this interactive map that Dennis Dean cobbled together, and add a few of your own), and all the neat stuff that the post-pandemic people produce.

Of course, one of my favorites is the black cat as a symbol of Halloween, and my absolutely absolute favorites are the real black kitties. I feature them for adoption every Halloween not just because of their association but also the difficulty, compared to others, in getting adopted.

On the one paw, there’s the myth of superstition. On the other paw, there’s the urban myth about their use in nefarious purposes by alleged devil worshippers. Since most cats have four paws, let’s use the paw metaphor as a cat’s-paw for this column’s structure.

A few Halloweens back, I wrote a synopsis of the history of the black cat, which also addressed the species in general. I called it “The black cat: Devil or angel?”

The Black Cat: Devil Or Angel?

Cats have a rich history in their storied career as amulets for protection, victims of ignorance, familiars for witches, killers of diseased vermin, and terrific house pets, among other things. They were deities among Egyptians and demonic presences during the 17th century and thereabouts. The pupils of their eyes seem to change like the phases of the moon, which gives them an aura of mystique. They’ve taken pivotal roles in art, literature, poetry and mythology.

Second paw: Superstition and other snags in adopting black cats

It’s no surprise to me that people still harbor uninformed and unenlightened beliefs about cats, let alone anything. There’s nothing unlucky about black cats in particular except for the effect of superstition on its treatment and their comparative rate of adoptability. More than once while volunteering at the shelter or a rescue, I’ve encountered humans who wanted any cat except for a black one. Almost without exception, they answered my question of why with a slightly embarrassed “Well, um, I’m, um—superstitious.” One little girl took a liking to a gorgeous, sleek, midnight-colored kitty whose mother also had an irrational aversion to black cats. I tried to address it by first handing over the little fellow to the child to hold and then transferred him, purring like a sewing machine, to mom. She melted a little but not enough to take him home.

There’s another reason that black cats aren’t adopted as often as cats—and dogs—of other colors, and that’s in their visibility and presentation. Former Long Beach Animal Care Services employee Jill Prout mentioned a theory that one’s eye gravitates to other colors first, and Helen Sanders CatPAWS photographer Eden Amans said that their faces kind of disappear.

”It’s harder to read their expressions—no eyebrows, a bigger contrast for teeth and eyes—and it’s harder to take photos of them for online adoption portals,” Amans said. She added that she often fits them with bling colors to accentuate their visibility.

It’s not that it’s never happened, but there really aren’t hordes of people running around grabbing black cats out of shelters and rescues and sacrificing them on Halloween. As long ago as 2001, myth-buster Snopes.com reported no grounds for the stories; however, they did say that shelters and rescues generally put a restriction on adopting black cats during this time.

But that was almost 20 years ago, and although there have been few confirmed statistics, Snopes hasn’t changed its tune, but shelters have. An “Animal Sheltering” article cited by Long Beach Animal Care Services manager Staycee Dains noted that some shelters have “swung to the other side of the pendulum” and now feature adoption of pairs comprising one black and one orange cat. This is a great idea for getting multiple cats out the shelter door and into a home, even though, as we all know, orange cats are the ultimate in adorable and have a lot fewer problems getting adopted. As a mentor, though, why not?

Even with fewer doors opening for trick-or-treaters and partygoers this year, Dains is more worried about the daily dangers that threaten wandering pets than she is about an occasional twisted individual.

“It’s been my experience, and the experience of many in our profession, that cats, black or otherwise, are in no more danger during the Halloween season than they are any other time of year,” Dains said. “If there are dangers, it is related to them being lost because of a lot of front-door traffic that tends to happen during the holiday. When the front door is opening frequently, all pets have a greater opportunity at getting lost.”

Fourth paw: Are you a fan of black cats? Well, here you go!

These kitties are available from Helen Sanders CatPaws. To adopt any of them or see the other hopping hopefuls, visit the adoption link on their page and fill out an application online. 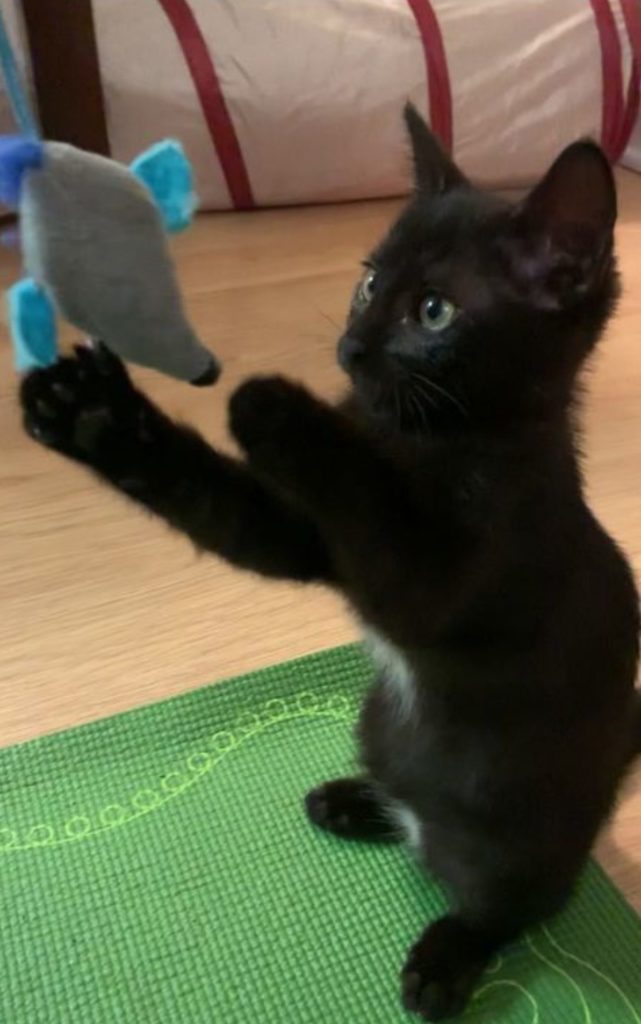 Mulan is about 2 months old. She loves other cats and particularly likes mixing it up with the adults. A charmer!

Nitro and Turbo are well named for their charisma and energy—they’re two cold-nitro-brew sleek brothers whose purrs are turbo powered. They love to play with each other and with other cats, and they love humans, too! They’re about 6 months old and would love to go home together—to increase all the good luck they bring! It’s hard to tell them apart when they’re running around like that, but Turbo has a white spot on his belly. Or is it Nitro? Oh, well.

The annual Strut Your Mutt dog walk, which has raised thousands of dollars for lifesaving projects, is going virtual like everything else. Best Friends has teamed up with local rescue groups, shelters, animal-welfare organizations and pet-community members for a virtual community walk and fundraiser to benefit homeless dogs and cats across the country. During this period of relative isolation, raising funds is more important than ever, so join up and participate in engaging opportunities to help throughout the season and build a virtual no-kill community. All funds raised go directly to lifesaving programs such as spay neuter services and adoption—and it’s all off leash!

Yoga practice can be augmented in the presence of cats! Feline Good Social Club has hosted several such events, but this time, you’ll have to bring your own cat. The club’s “supurr-special yoga buddy,” Melissa Ann Clark, will come to the yoga lounge one Saturday purr month to host yoga live-stream sessions with a holiday theme. This month’s theme will, of course, be Halloween, and all the felines haunting the lounge will be slinking in and out as the event continues. No cat? Adopt one from the Virtual Pets section!

What better way to protect yourself and others from those coronavirus cooties than with a faithful bulldog guardian at the gate! They’re 2-ply non-medical grade protection that feel good and comfy. They’re also hand-washable. Best of all, these whimsical wearables support Southern California Bulldog Rescue! Order them here. 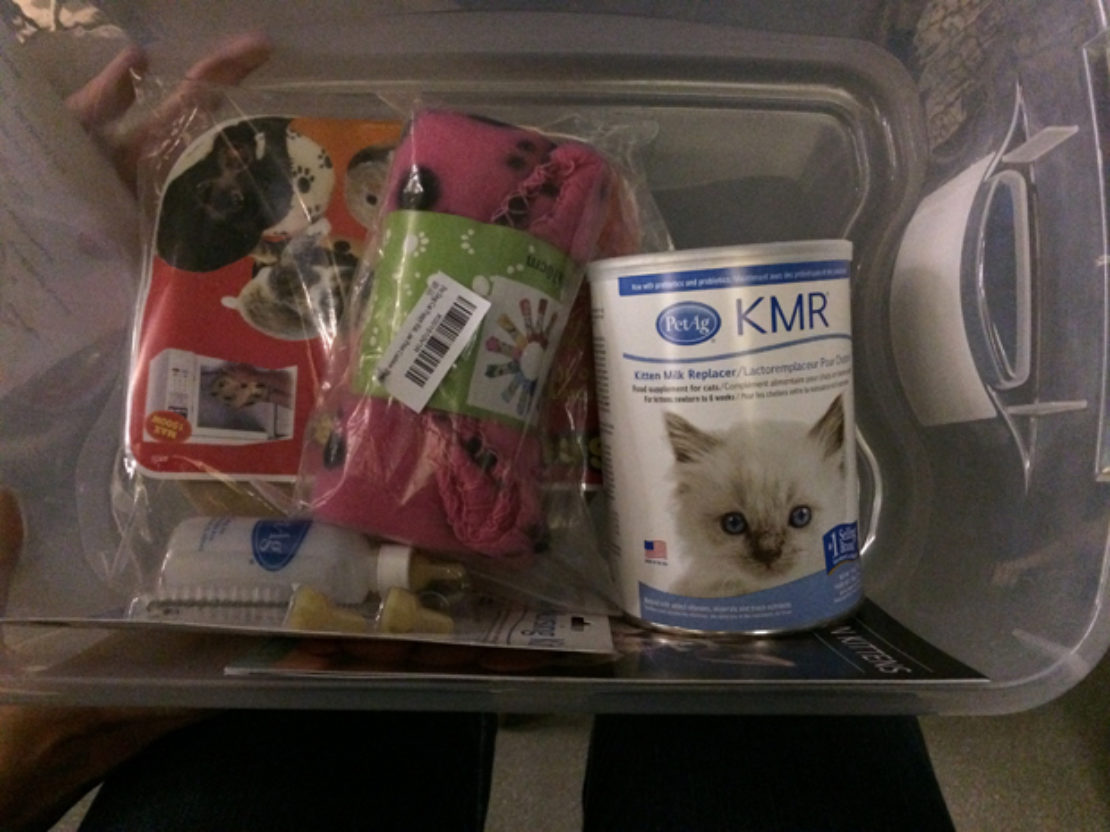 Kitten season is just about up, but kittens still enter shelters. It isn’t unusual to find nests of young, seemingly abandoned kittens during kitten season.  If you are interested in obtaining a Kitten Care Kit made possible by Helen Sanders CatPAWS, please email [email protected].

Long Beach Animal Care Services has spay/neuter vouchers available. They’ll take a healthy nip out of the cost of a procedure. Residents of any of the five cities served by the shelter can telephone the general number at 562-570–7387 to request a voucher.

The Spay/Neuter Project of Los Angeles (SNP/LA) is back in business for free and low-cost spay/neuter services, and they’re extending the hours of their vaccination clinics. The San Pedro clinic, located at 957 N. Gaffey St., will give shots every third Thursday between 9 a.m. and 8 p.m. Call 310-574–5555 to see if you qualify for services.

If you can see the bottom of the kibble bag: 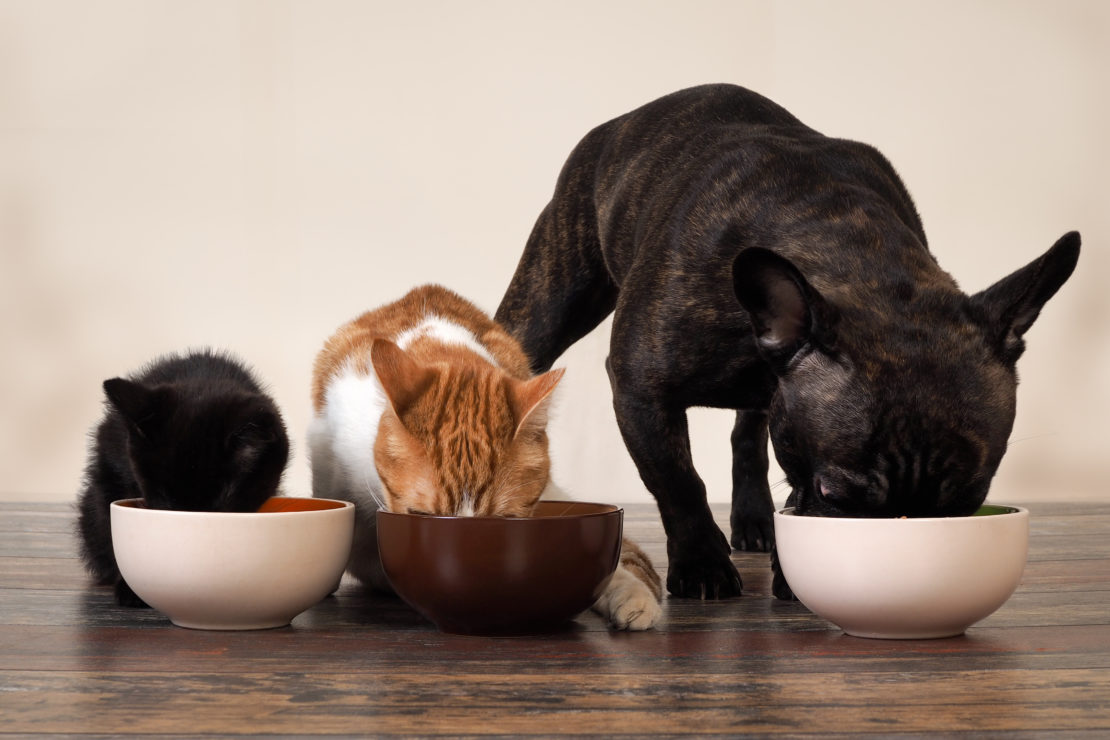 Helen Sanders CatPAWS offers, through specific private donors, e-gift cards for people struggling during the crisis to buy food for their pets. The CatPAWS Spay/Neuter Fund, also privately funded, has vouchers available for anyone not able to go to the shelter for them. They also accept donations.

Pets of the Homeless’ home page gives a self-description as the only organization focusing only on providing food and care for pets belonging to homeless people. Businesses and other organizations across the country receive in-kind donations of food and other needs that the dogs and cats’ human families can pick up at outreach locations. The following Long Beach businesses will accept your donations:

Food and supplies are available at Beacon for Him Ministries, 1535 Gundry Ave. Long Beach, Mondays from 9 a.m. to noon and Saturdays from noon to 3 p.m.; and at Christian Outreach in Action, 515 E. Third St., Long Beach, Thursday from 9 to 11 a.m. Donations will be gratefully accepted at these locations as well. 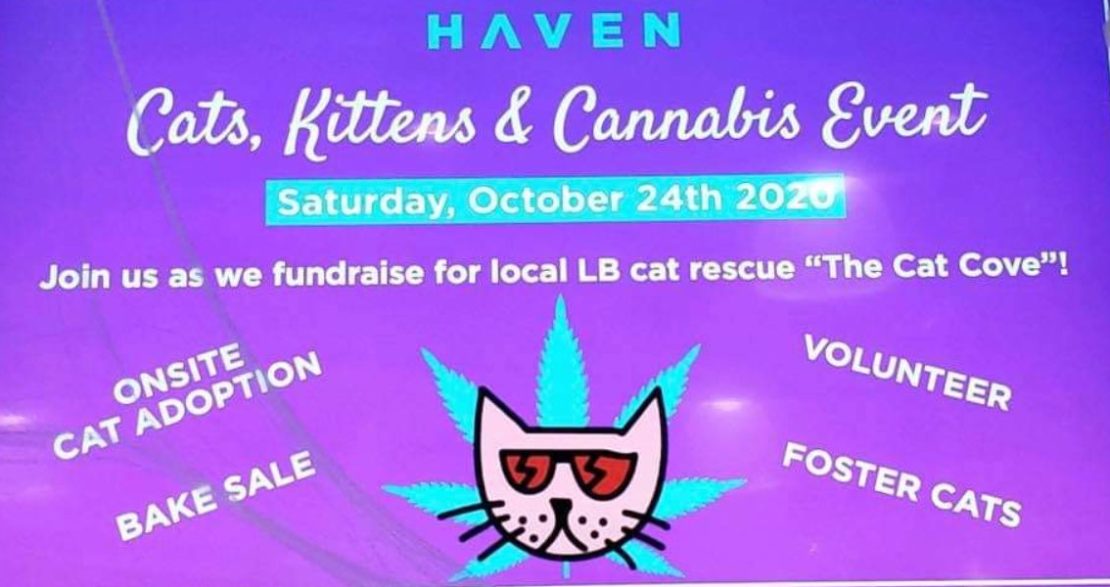 Lady or Tiger? Cat or cannabis? Both? Either way, you can relax and energize. Felines come in as many strains as weed does, but cats will last a lot longer! Meet adoptable kitties, choose pet costumes, bid on raffle items, buy a few baked goods, and maybe get baked yourself. You can shop at any of the Haven stores and see a portion of the sales donated to The Cat Cove Pet Rescue!

Window-shopping’s a neat pastime and likely has become more common during the pandemic. Helen Sanders CatPAWS has applied window-shopping to cat adoption; you can peer at several of the fine felines through the windows of the PetSmart adoption center in Seal Beach. Sadly, no ear scratching or chin rubs at this time, but volunteers can answer questions and provide you with adoption information! Be sure to wear a mask. You can find adoption applications and all the kitties here.

The following pet-related businesses regularly feature cat, dog and rabbit adoptions, but as of now, adoptions are mainly by appointment. Click on the links for each rescue in case of updates or changes. These organizations operate through donations and grants, and anything you can give would be welcome. Please suggest any Long Beach-area rescues to add to the list.