The coronavirus pandemic has wreaked havoc on the economy, but the pain isn’t being shared equally across different geographies of the city, economists said Thursday during a quarterly forum.

North Long Beach has seen a 39% increase in small business revenue since the pandemic began in March; the retail and dining core of Belmont Shore, meanwhile, has seen a steep decline of 57%.

Seiji Steimetz professor and chair of CSULB’s Economics Department said a reason North Long Beach’s small business economic ecosystem grew during the pandemic is because many small groceries and bodegas are located on the north side.

“All of you who belong to some Facebook group, at some point they tell you to buy toilet paper at the bodegas,” Steimetz said during the Long Beach Quarterly Economic Forum. 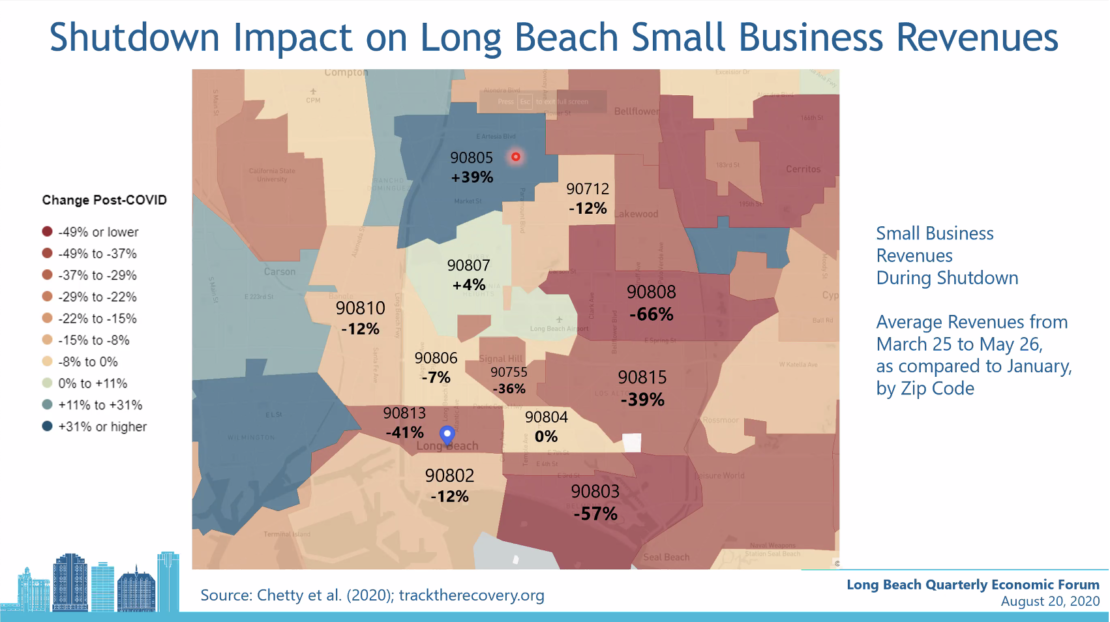 The map shows how different areas of Long Beach had increases or decreases in small business revenue.

When the pandemic began in March, local grocery stores and bodegas in North Long Beach became an essential stop for families weathering the shutdown.

“When the pandemic began we saw many new customers that came to this area to stock up when produce was scarce,” she said in Spanish.

Torres said sales would often dip when a larger more brand-named store would open nearby, but that there was a significant increase in sales during that time as compared to before the pandemic.

Maria Polanco lives nearby, and frequents the small grocery stores to purchase vegetables.

“I like to support the small grocers in North Long Beach,” she said.