A new apartment complex meant for larger families in Downtown was approved by the Long Beach Planning Commission Thursday. The project could deliver 69 new units to the area with over half having four or five bedrooms.

The “Queen Beach” project would replace the old Queen Beach Printers located on the southwest corner of 10th Street and Pine Avenue. The project is being proposed by Beach City Capital, which is based in Hermosa Beach and lists a second 24-unit Long Beach project at Seventh Street and Pine as being in pre-development.

The eight-story, 16,000-square-foot building will be built across three parcels that include the printer building and its parking lot and includes two levels or parking for residents with 123 spaces, according to project plans on the city’s website. It will include a mix of studios (10), three-bedroom (24), four-bedroom (12) and five-bedroom apartments (23).

Space for ground-floor retail will be included on the Pine Avenue side of the building, with the building’s leasing office, lobby and bicycle storage along the 10th Street frontage. The building will also include a courtyard on the third floor and a rooftop deck. 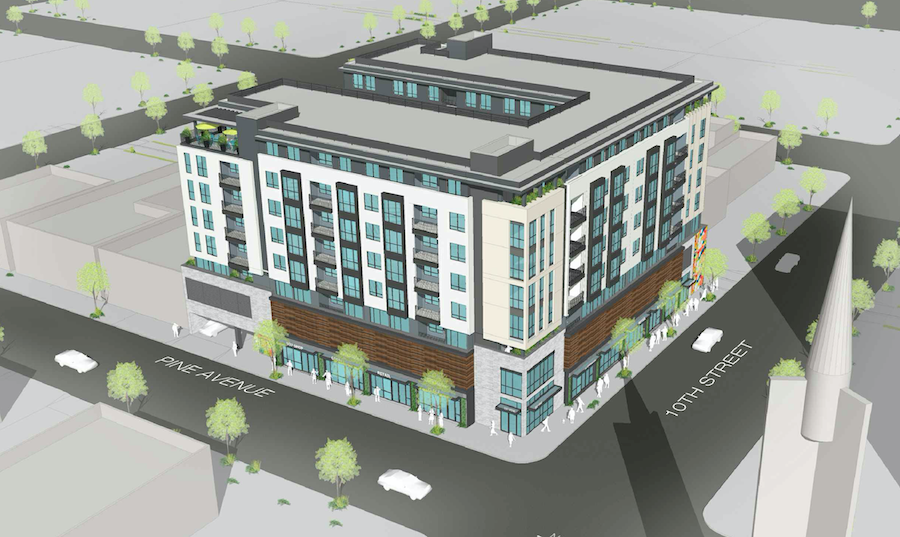 A rendering of the eight story, 69-unit project proposed by Beach City Capital at the corner of Pine Avenue and 10th Street.

While the project is within the Downtown Plan, which had maxed out the 5,000 residential units approved in 2012, an addendum adopted last year allows for over 3,200 additional units that will take the place of undeveloped office space, hotel and commercial uses.

Because the application for the project was filed with the city prior to its inclusionary housing ordinance taking effect it won’t be required to include any affordable units. If it had been submitted after March 6, 2021, it would have had to set aside 11% of its units as affordable housing for 55 years or pay into a fund so the city could build those units offsite.

Long Beach was given a regional goal of 26,502 for housing unit production over the next eight years by the Southern California Association of Governments. Of those units, the largest portion (11,156) was for households making over 120% of the area median income.

The median income in Los Angeles County is $91,100 for a family of four, according to the state.