The Long Beach Planning Commission could take the first steps toward approving a massive Downtown housing development that would replace a large portion of the former City Place shopping center with 900 new apartment units.

Waterford Property Company, the developer seeking to overhaul the shopping center, would demolish the two existing buildings between Fourth and Sixth streets, which includes the old Walmart that anchored the center but closed in 2016.

Three new eight-story apartment buildings could replace the demolished retail space. They would include 102 studio units, 476 one-bedroom, 313 two-bedroom and nine three-bedroom units. It would also include a total of 1,383 new parking spaces.

Waterford acquired the space in March 2021 along with Turnbridge Equities and Monument Square Investment, who are working together to create the new project title “Mosaic,” which they released plans for in September.

In addition to the housing units, the project is expected to include 38,405 feet of leasable commercial and retail space including a separate one-story retail pavilion that will sit north of the intersection of Fifth Street and The Promenade.

It’s unclear what will happen to the existing retail businesses that include a T-Mobile store, GameStop and Fashion Island.

A rendering of the forthcoming Mosaic development that shows the intersection of Fourth Street and The Promenade North. The property owners hope to close off this portion of the Promenade to vehicular traffic. Courtesy of Turnbridge Equities and Waterford Property Company.

Because the project is located in the city’s inclusionary housing zone, it would require 6% of the units to be reserved for very low-income households.

The city is phasing in its inclusionary housing policy and eventually, developers would have to reserve 11% of rental units or 10% of ownership units in future projects.

In 2022, “very-low income” was defined as $59,500 or less for a family of four. The units would be required to remain affordable for 55 years. The affordable units would be comprised of 20 studios, 16 one-bedroom and 20 two-bedroom units, according to the plans submitted to the city.

On Thursday, the Planning Commission is scheduled to vote on the project’s site plan and possibly approve a division of the northernmost lot into two.

The plans also include a request for a street closure of the Promenade North between Third and Fifth streets, which would be open to pedestrians and could include outdoor seating and work areas, cafe dining and crosswalks designed with art graphics. 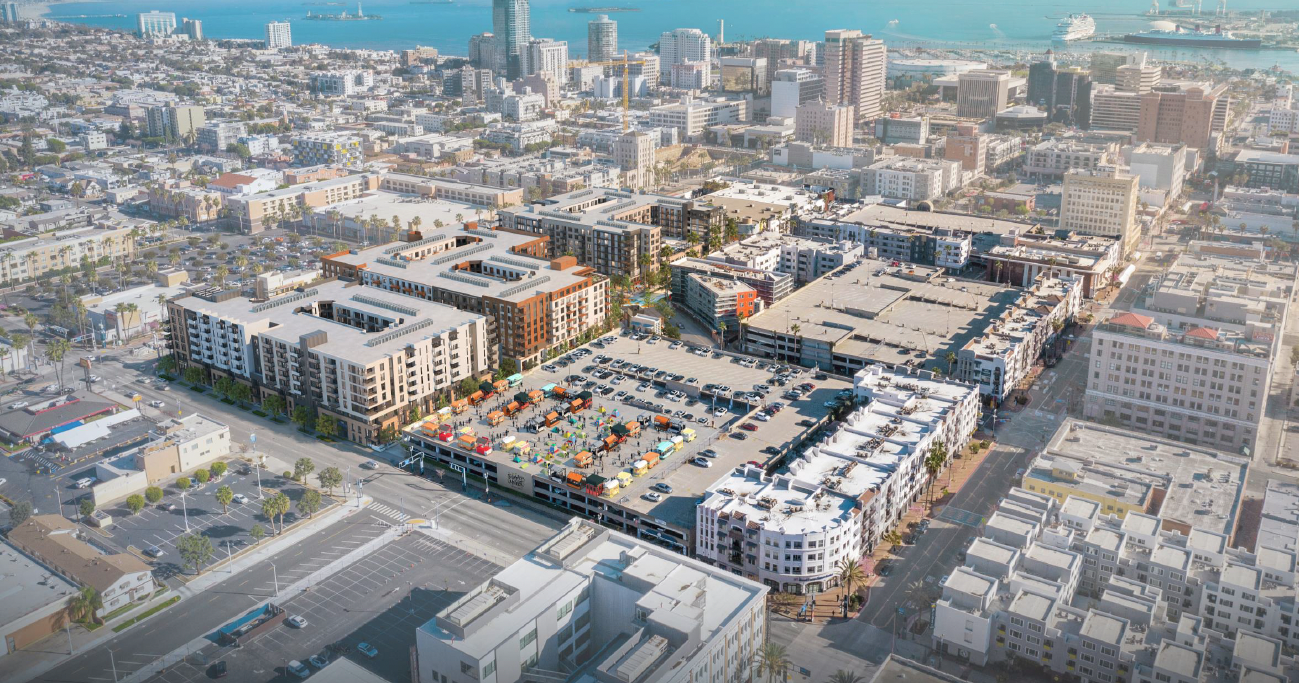 An overhead rendering of the forthcoming Mosaic development in Downtown Long Beach. Courtesy of Turnbridge Equities and Waterford Property Company.

Under the deal, the city would retake ownership of Fourth Street and Fifth Street within the project area—they were privately owned—and the developer would also create a “paseo” that would connect Sixth Street to Fifth Street. The developer would still be required to maintain the sidewalks because those would remain private under the proposed project.

One of the conditions of approval for the project is that the developer put in place things that will encourage alternate modes of transportation. Parking spaces would be rented separate from the apartment units and the project would include an on-site telecommuting center for residents to work from home, on-site parking and repairs for cyclists and a discounted transit program.

City officials have previously said it could take a year or longer for the developers to get all the necessary permits it they need to move forward with the demolition and construction of the Mosaic project.

The Planning Commission is meeting in person at the Bob Foster Civic Chambers Thursday, Jan. 19, at 5 p.m..