The 140-page Climate Vulnerability Assessment analyzed recent climate change trends and those projected to take place throughout the decades to come. Some of the communities most affected and mentioned in the study included Long Beach, East Los Angeles, South Gate, Bellflower and San Pedro.

Long Beach was identified as a community most at risk of flooding and extreme heat exposure.

The combination of rising sea-levels and anticipated bursts of intense rainstorms following drought will impact neighborhoods closest to the ocean, such as Naples Island and homes in the Alamitos Beach area, and those communities in West Long Beach along the Los Angeles River.

“There will be heavy rainstorms and longer periods of drought,” said Alison Frazzini, sustainability advisor for the Chief Sustainability Office and the climate report’s lead manager. “The combination of that plus the sea-level rise will together create storm surges that are the biggest threat.”

While heat exhaustion was another climate-related impact that is expected to disproportionately impact communities in Long Beach, the effects are already being felt in some communities. 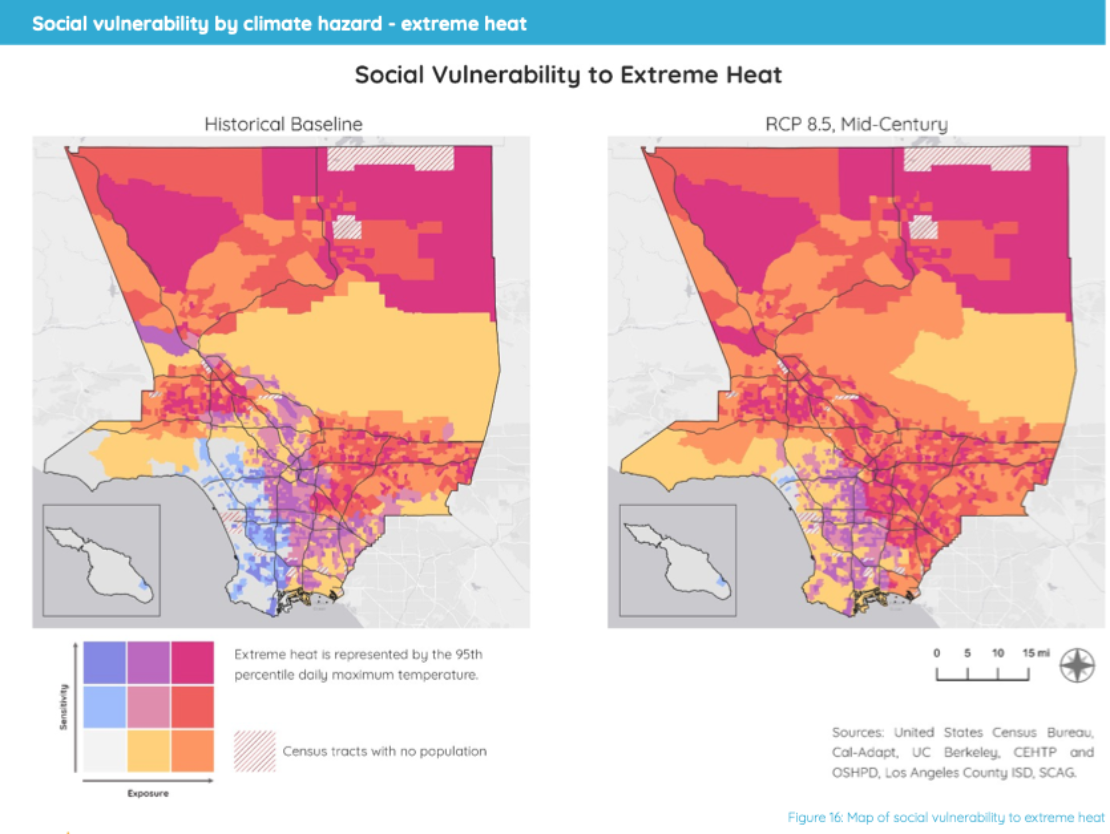 The map on the left shows a historical baseline for census tracts that are vulnerable to heat. The map on the right shows how extreme heat will increase by mid century. Areas that are dark red, orange or yellow color will be most impacted. Image courtesy Los Angeles County Climate Vulnerability Assessment 2021.

A survey collected earlier this year as part of a project called Cooling Long Beach found that 40% of respondents experienced negative health symptoms on hot days, and 79% said that heat changed how they travel. These communities were located in Central, West and North Long Beach where there is less tree coverage and residents live in densely packed communities.

In North Long Beach, neighborhoods there already experience hotter days than other areas of Long Beach.

An example of extreme heat highlighted in the report took place in 2015 when the intense temperature caused a power blackout in Downtown Long Beach. Seniors living in highrise apartments were left in the dark and without access to air conditioning.

Extreme heat can be deadly. A study published in 2017 found that 30 percent of the world’s population currently lives in places where heat crosses the threshold considered deadly. A recent report from the Los Angeles Times found that heat exhaustion falls more heavily on the sick, poor, elderly and the very young.

She lives in Long Beach on the border of Bixby Knolls and North Long Beach. Her work connected local community activist groups, such as East Yard Communities for Environmental Justice and the Long Beach Environmental Alliance, to the county’s project by hosting workshop meetings and reporting that data collected to the county.

She said extreme heat will affect many Long Beach industrial workers, such as her boyfriend who works as a trash truck operator for the city.

Included in the study was testimony from a Port of Los Angeles employee who said dripping sweat that fell off port employees who were working inside shipping containers would sizzle when it hit the metal container. Shipping containers could get up to 20 degrees hotter than the temperature outside the container.

The study was created in part to spur activism from nonprofit groups to demand policy that would protect climate-change vulnerable communities, Hernandez said.

“This is what we need for nonprofits and advocates to hold up and say ‘we need funding, we need more resources to address these issues,’” Hernandez said.

The state’s recent budget shows greater sums of money are being reserved to tackle different issues associated with climate change.

About $50 million are set aside for urban greening and forestry programs, the budget shows.

The deadliest consequence of climate change is hotter weather