Rising temperatures are already having an impact on residents in the Washington neighborhood, one of the areas that experts say will be hardest hit by climate change, a new survey shows.

The survey, conducted this year and released in June, showed 40% of respondents experienced negative health symptoms on hot days, and 79% said that “heat changes how I travel.”

The survey is part of a project called Cooling Long Beach. City planners are partnering with local associations to study the impacts of extreme heat on areas in Central, West and North Long Beach, which have less tree cover and more pavement than other parts of the city.

Aside from impacts on health, researchers say that residents in the Washington area specifically are more likely to travel in a vehicle rather than on foot or using bikes in order to avoid extreme heat, which adds more pollution to the air.

The project is a part of a wide-reaching city plan to study the impacts of climate change, how the city responds to it, and how the city can limit the damage.

The so-called Climate Action and Adaptation Plan, which is required by the state, is expected to be approved sometime this year. It has been in the works for at least two years.

Rising temperatures is the climate change impact that affects the greatest number of people, Jennifer Ly, a city planner, said during a project meeting with the community this past spring.

However, rising temperatures burdens different parts of the city more, she said.

The researchers, whose findings are published in the journal Earth’s Future, analyzed remotely sensed land surface temperature measurements of 1,056 U.S. counties that have 10 or more census districts. The analysis revealed that for 71% of those counties, land surface temperatures in communities with higher rates of poverty can be up to 7 degrees Fahrenheit warmer, compared to the richest neighborhoods during the summer months. The same is true for minority communities across the country compared to their non-Hispanic, White neighbors—even when controlling for income. 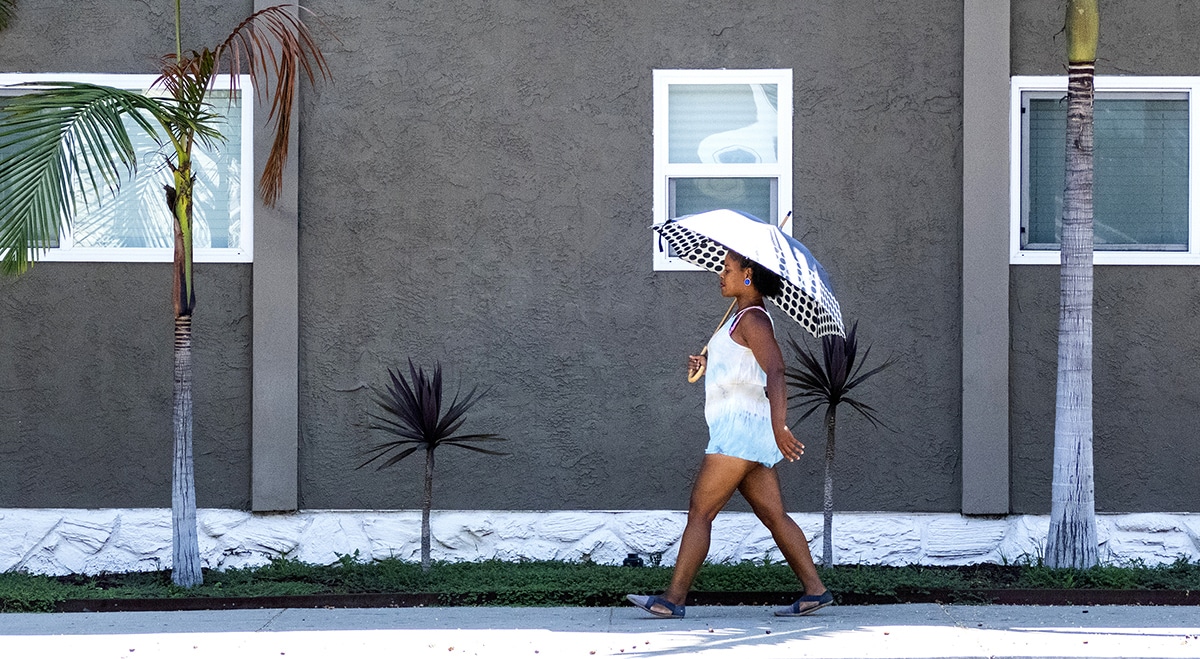 A woman takes a walk along Redondo Avenue as she takes shade under an umbrella as temperatures rise for another Southern California heat wave in Long Beach August 6, 2018.

And the Washington neighborhood in Long Beach aligns with that data, being one of Long Beach’s lower-income neighborhoods, predominantly Latino populated and suffering more extreme heat.

“We really want to see shade accessible to everybody, but … that’s not really what’s happening today,” Lydia Kenselaar, landscape designer and a staff partner with Cooling Long Beach.

“So this means you have a lot of more people walking around and waiting for transit on those hot streets being exposed to temperatures for longer,” Kenselaar said.

Project staff and residents are considering solutions such as planting more trees and installing shade structures to help cool the area down. Researchers found that the areas that have more bus or train stops have very little shade. Many people walk and wait unshaded for long periods of time there, researchers added.

Kenselaar said that her team measured the heat of public spaces.

“For example, the roads that are made of asphalt, which is a dark color, those really absorb and retain heat and can be so much hotter than grass or shaded areas,” she said. She said they found a difference of 54 degrees Fahrenheit between those two types of materials.

This is an example of the so-called “urban heat island effect,” the difference between how heat is experienced in the urban areas versus more rural areas that have more vegetation, Kenselaar said.

Walking in a parking lot in 100-degree weather versus walking under some trees at a park feels a lot different, for example.

Pavement and buildings can absorb and retain the heat during the day, and retain that heat throughout the night. By contrast, Kenselaar said, trees can cool the surface by as much as 45 degrees, cooling down faster when the sun sets.

“These act like the planet’s air conditioning,” she said. “They’re great at reflecting heat and cooling down quickly.”

Painting roads and rooftops a light-colored paint is another way to bring down temperatures. The method is called “cool paving,” which helps to reflect sunlight and can cool temps as much as 20 degrees, according to Kenselaar.

As project staff continue to collect data on the neighborhood in forms of surveys and focus groups, staff will present their findings to City Council. With that, researchers said leaders could then direct city funding to fund cooling projects in future years, and apply for funding to support projects that are beyond the city’s budget. Project staff plan to complete their study sometime this year, but it is unclear when.

Project researchers say their study could implement measures that are identified in the Long Beach Climate Action and Adaptation Plan and General Plan, such as policies aimed at “creating a more resilient and sustainable community.”

Long Beach city staff has partnered with the Southern California Association of Governments, Alta, Habitat for Humanity of Greater Los Angeles, and the Washington Neighborhood Association to conduct this study.

The deadliest consequence of climate change is hotter weather