Eric Harrison worked around string lights and pots of flowers as he painted the fence separating his girlfriend’s home from the scene of a fatal accident earlier this month where police say Aiden Gossage, a senior at Millikan High School, was killed by a suspected drunk driver.

Harrison removed some trash and cigarette butts that had accumulated at the memorial that’s sprung up in Aiden’s memory and returned with a blue bucket to water the growing quantity of flowers left at the scene of his death. He said it was the right thing to do.

Harrison has lived at the home for about two months, but even in that short amount of time, he said the consensus among his neighbors is that the approximately 0.6-mile stretch of Los Coyotes between Spring Street and Willow Street is dangerous.

He pointed to the bend that southbound traffic comes around before the pedestrian crosswalk at the intersection of Deborah Street and the diagonal where Aiden was struck as one of the bigger problems.

“If a kid’s looking at his phone, not paying attention, he doesn’t stand a chance,” Harrison said.

Police arrested 33-year-old Kevin Chris Dahl on suspicion of drunk driving and gross vehicular manslaughter. Dahl is out on bail and authorities have yet to file charges, but an LBPD spokesperson said detectives are expected to present the case to the Los Angeles County District Attorney’s office before Dahl’s Jan. 6 court date.

Despite Aiden’s death potentially being caused by a drunk driver, there are lingering concerns over the safety of the corridor. 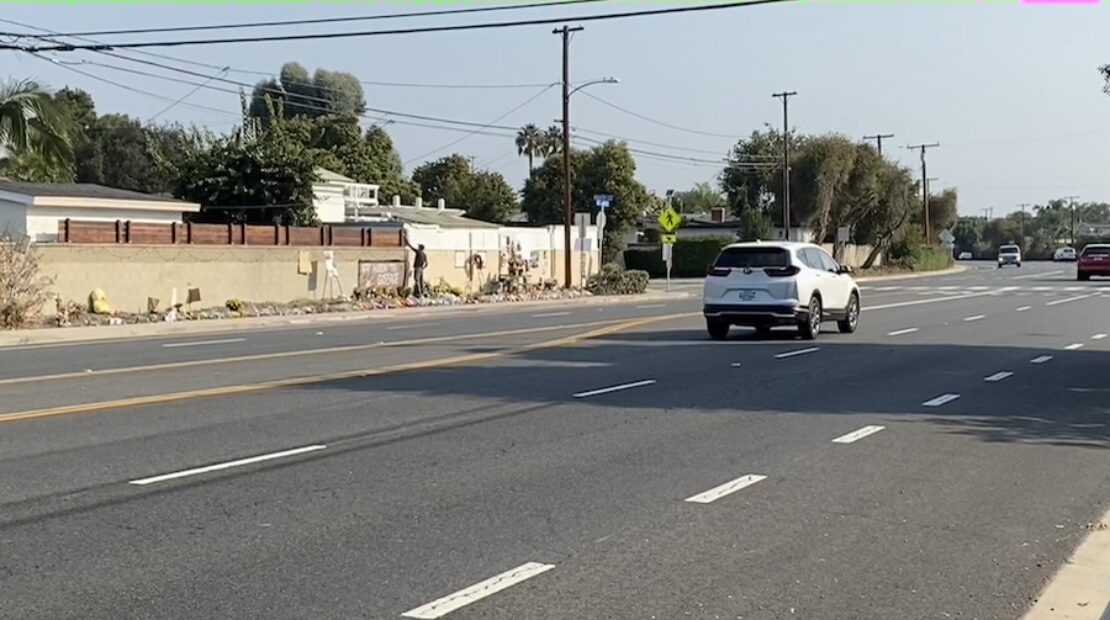 Drivers heading north on Los Coyotes Diagonal at Deborah Street toward a curve that some residents think is dangerous for drivers and pedestrians. Photo by Jason Ruiz

Rodney Montiel stopped by the memorial Monday morning to pay respect to Aiden, whom his 16-year-old son knew. Montiel recalled that his friend, who also attended Millikan, was killed by a drunk driver on Los Coyotes Diagonal over 30 years ago.

“It’s always been the biggest fear of my life for my son,” Montiel said.

Aiden’s parents, Lily and Greg Gossage, started a petition for more traffic safety measures along the stretch of Los Coyotes and for increased enforcement of speeding. The speed limit is currently 40 mph.

The petition calls for the installation of a pedestrian-activated traffic signal at Deborah Street, more street lamps along Los Coyotes, the trimming of tree branches that obscure the view of traffic signs and increased enforcement of reckless driving and driving under the influence laws. The Gossages collected 12,000 signatures in just over a week.

“If his death has any meaning at all, hopefully it reminds people that safety is important,” Greg said.

Lily said that after Aiden’s death, multiple people who were at his side when he died tracked her down, one even using a recently created Instagram account to let her know her son didn’t die alone. Lily said that Aiden’s death has illuminated how good of a community they live in, and the petition was made to help prevent the same thing from happening to someone else’s child.

“It’s a very painful process,” Lily said. “We are dying. We die a little every day. There are still a lot of children that will have to cross that street.”

It’s unclear what kind of changes can be made to the street to improve pedestrian and vehicle safety.

Councilwoman Stacy Mungo Flanigan represents the area where the accident happened but told constituents in an email that the intersection where Aiden was killed might not be eligible for a signal.

Mungo Flanigan said it has already been surveyed multiple times for the installation of a traffic light but did not meet state and federal guidelines, which take into account vehicle and pedestrian traffic volume, among other things, before allowing signals to be installed.

The flashing crosswalk beacons and signage that Aiden was using to cross the street when he was hit were installed under Mungo Flanigan’s time in office. Her email said that her office would pursue the installation of a speed feedback sign before the curve southbound drivers round before Deborah Street.

As of now, there is no plan to install more street lamps, Mungo Flanigan said.

“We need all the data before we can make a decision,” she said.

Installing street lamps does not require the same kind of traffic analysis that a traffic signal does, but it does involve a fair amount of planning, said Joy Contreras, a spokesperson for Public Works.

Contreras said that the review process would determine if new lights have access to an existing electricity grid and if trees would need to be trimmed to make maximize the light’s effect.

The city would also want to coordinate the installation of new lights with other infrastructure projects on the same street, so sidewalks and streets are not dug up multiple times.

“We have all these different ideas on what can work, but instead of putting one out there we have to figure out what the problem is before putting out a solution,” Contreras said.

The department could look at other solutions like adding additional reflective elements or re-striping the road. Contreras said the department has also received inquiries about speed cushions being added to Los Coyotes.

Greg and Lily Gossage understand that the petition might not result in wide-ranging changes to Los Coyotes’ traffic safety conditions. Greg said that lighting would be a start that could give drivers an edge when traveling down the corridor, but part of traffic safety also falls on the driver, he said.

“He had an obligation to provide safety for my son and anyone outside that vehicle,” Greg said. “We all do as drivers and we need to take that seriously. If he had, maybe my son would still be alive.”

Flowers, candles, grief and love at site of crash that killed Millikan student