Ed Killingsworth on the beach: Home he designed on the Peninsula is on the market for $5.179 million • Long Beach Post News
- ADVERTISEMENT -

A two-story beach house at 2 Laguna Place on the Peninsula is on the market for the second time since world-renowned Long Beach architect Edward Killingsworth designed it in 1956 for its original owners, Dr. Thomas Kiddie and his wife Mary.

The listing tag of $5.18 million puts the house in the pricing stratosphere of Long Beach homes. Currently, there are just two other homes listed at a higher figure: An Alamitos Bay-front five-bedroom, five-bath at 5565 Naples Canal, for $5.7 million, and another Peninsula home, a four-bedroom, seven-bath oceanfront home on the boardwalk at 5601 E. Seaside Walk for $5.199 million.

The Kiddie family got its money’s worth over the decades. Thomas Kiddie was a pathologist at St. Mary Hospital and both he and his wife were championship anglers. He was president of the Southern California Tuna Club as well as president of the Long Beach Medical Association. Together they raised two boys and two girls in the beachfront home. Thomas died in 1994, but the house remained as the center for family get-togethers for another 23 years, when Mary died at home, surrounded by her children, as the sun and the year were setting, on Dec. 30, 2017.

Five months later, in May 2018, the home was purchased, still in its original Killingsworth design, for $2.6 million.

According to listing agent Keith Muirhead, the new owners spent at least $1 million on remodeling the house, transforming it from a homey, family beach house into something a few levels more glamorous and upscale.

There are still major Killingsworth features, including the generous use of glass, his floating stairs, the nice touches of Catalina Island-quarried stone that gives it a solid mid-century look, as do the post-and-beam ceilings, a Killingsworth/Mid-Modern signature. 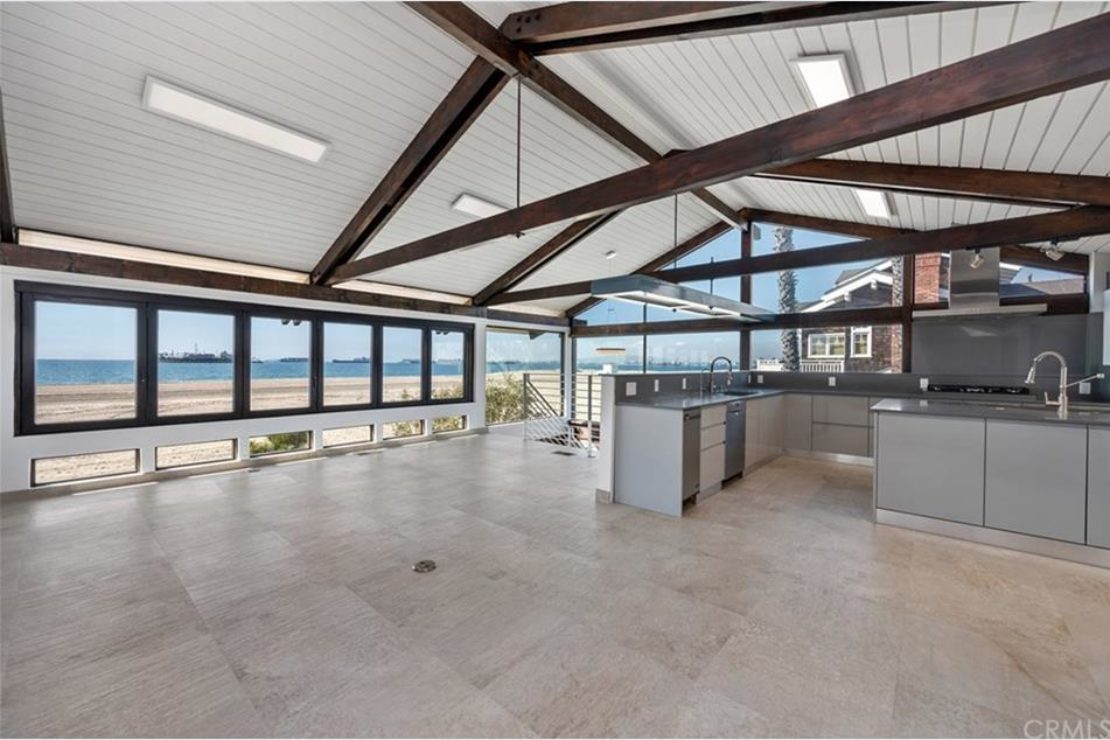 High, exposed beam ceilings and generous use of glass give an extra sense of space to the dining/kitchen area of the home at 2 Laguna Place. Listing photo courtesy of Keith Muirhead.

The landscaping isn’t as graceful as Killingsworth generally preferred, but perhaps the eternal expanse of the Pacific visible throughout the house was more than enough for the architect who invariably integrated the inside of his houses with the outside environment.

The sellers have obviously put a lot of money into the house, with new window trimming, a kitchen with top-dollar appliances and modernized bathrooms.

The home retains its wide-open layouts on both floors, with the top floor designed around an open-air courtyard patio. The master suite features sliding doors to the outdoor patio, wood ceilings, built-in wardrobe closets and a master bathroom with vanity, dual sinks, and a separate bathtub and walk-in shower.

The home also has an elevator and a two-car garage.

The upgrades, coupled with the home’s setting, makes it one of the most opulent properties in town right now, though it might not fly off the shelf at $5-million-plus. “One you get over the $5 million mark, you’re separating the men from the boys,” Realtor Muirhead admits. “You need a lot of millions.”

The home, as it stands now, isn’t so much an authentic Killingsworth as it is a home inspired by Killingsworth. He wasn’t an architect who thought too highly of people monkeying around with his original plans, and when a home he designed was significantly, or oftentimes insignificantly, altered, it was generally dead to him and he wrote it off as a child gone hopelessly bad, leaving him both broken-hearted and resigned to the loss.

Which isn’t to say there’s anything wrong with the house—and for many people’s taste it’s vastly improved and perhaps warrants its price tag.

It’s a gem if you’re looking for the ultimate beach pad, but if you’re a Killingsworth purist, wait around for one of the other couple dozen Long Beach homes that he’s designed to come on the market.