Home, or the office, is where the heart is • Long Beach Post News
- ADVERTISEMENT -

The office used to symbolize a drab, Drabble-esque existence, in which you sat in an austere cubicle with drawings your kids made when they were little, and did some sort of brain-dissolving drudge work.

In many cases, the office is still like that, because there’ll always be a need for office workers to deal with scraps of tin, or whatever other sort of widgetry still requires data entry and the stapling of invoice forms to work their way into the pipeline.

During much of the COVID era, corporate bosses were somewhat obliged to send their office-workers home for great stretches of time, and in much of that time things went rather swimmingly for companies. Turned out that oftentimes people working in sweatpants and fuzzy slippers were at least as productive, if not more so, than when they were told to dress professionally before being stuffed into cubicles where no one could see them.

With the coronavirus restrictions rolling back to something resembling normalcy, some workers are happy to get out of their families’ hair and head back to the office. Others, perhaps, are less enthusiastic.

One of the determining factors regarding how workers feel about returning to the office, is, in fact, the office itself.

A colorless (unless you consider greige a color), ugly, cramped, soul-crushing environment may be met with the same despondency as a dog being sent back to the kennel. OK, not that sad; now I’m depressing myself. But certainly something south of happy.

On the other hand, a pleasant—dare we say fun?—workplace can be a nice change and a welcome return to what you might generously consider civilization.

Which brings us to this office in Long Beach’s historic Insurance Exchange Building. 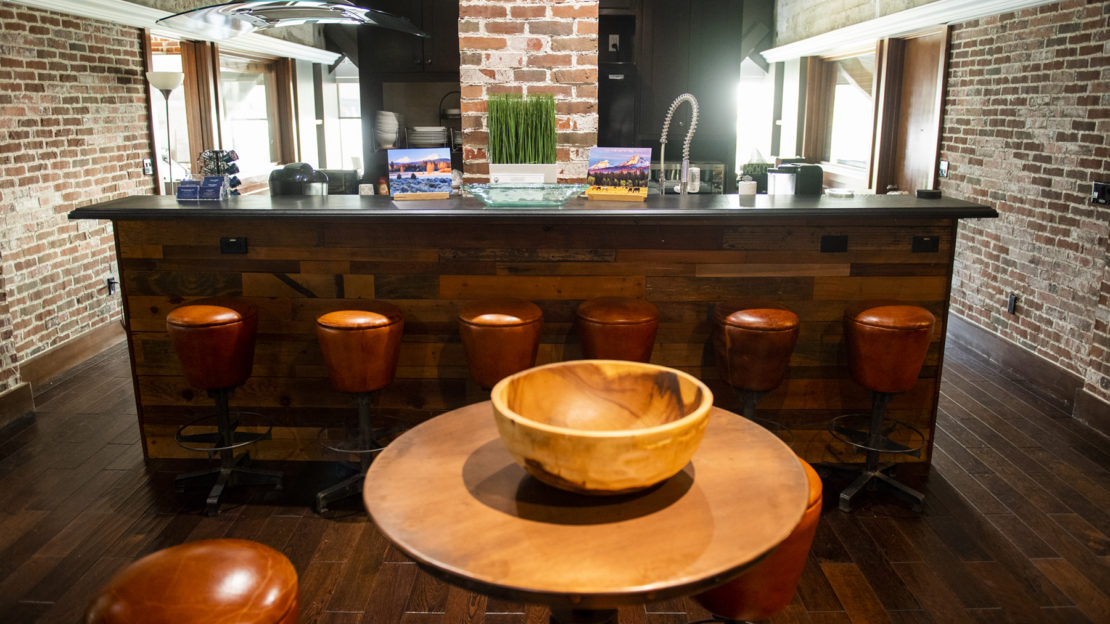 The beautiful 1925 Beaux Arts building was built by Lorne and Way Middough, who put their  Middoughs’ Boys’ and Men’s Shops on the first floor and rented out the building’s upper floor. The city’s first municipal court rented the third, fifth and sixth floors from 1925 through 1930.

The Insurance Exchange (as it would become known in 1931 when the clothing store closed and the court moved to the Jergins Trust building and the space became occupied mostly by insurance companies) popped up during an incredibly busy time for construction in and around Downtown Long Beach.

In just five years, between 1924 and 1929, some of the city’s finest and most notable buildings sprung up: Farmers & Merchants and Security Pacific banks, the Jergins Trust, the Villa Riviera, the Breakers, the Cooper Arms, the Kress Department Store and the Pacific Coast and Ebell clubs.

The office that will be home to John S. Hinman’s team was designed by an engineering firm that bought the second floor space in May 2019.

“And then COVID hit and they all went home,” said Sage Group’s Juan Huizar, who, with Caleb Baldwin, represented the seller. Both are with Sage Real Estate. Realtor John Lindberg, of Re/max Real Estate Specialists represented Hinman in the sale.

Thousands of other workers in the Long Beach area, too, went home, and only recently have some of them come trickling back, though not in numbers large enough to refill all the office space they abandoned during the pandemic.

All of the Realtors involved in the sale acknowledge that office space in general may never return to pre-COVID numbers, but, they agree, swankier spaces will thrive.

The Insurance Exchange office of John H. Hinman is certainly top-shelf. It’s an open space with the sort of exposed-brick-and-steel-earthquake-reinforcement beams look that’s associated with lofts, and it’s got the serious appearance of a law office, perhaps more so than an engineering workspace. Dark, polished wood abounds on the trim and floors, along with original masonry while large windows soften the seriousness of the woodwork.

The space is dominated by a centrally placed coffee station/bar with leather-upholstered stools. It gives the place an upper-class coffee house vibe and lets you know that the tenants take their caffeine seriously.

The space is broken into separate offices and meeting rooms, some of which Hinman may sublease until his staff returns in enough numbers to fill the 2,730 square-foot space.

Oddly, Hinman won’t enjoy the new digs as much as his associates will. He and his wife and three small children live in Bend, Oregon, and he works via Zoom most of the time, traveling to Long Beach a couple of times a month for trials and to check in with his co-workers.

Still, he looks forward to visiting his new office. “It’s such a cool location,” he said. “I had my eye on it when it sold before, but I couldn’t rationalize it at the time. I had a big office, about 3,300 square feet in the Circle Business Center, then the pandemic came and everyone went home except for one person, so I downsized to a tiny, 300 square-foot office on Naples Plaza.”

Now, Hinman anticipates a bit of a rebound in terms of people coming to the office. Especially a nice one.

Alan L. Burks, president and director of architecture at Long Beach-based Environ Architecture, whose work includes designing work spaces, says that the enthusiasm workers have regarding a return to the office “depends on each person’s situation. If they have an hour or two commute every day, they might prefer working remotely, whereas I live and work in Long Beach and only have a short drive to the office.”

But the office itself should be pleasant. “Office design is directly related to productivity,” he says. “A good office environment is very, very important. But it may not be important five days a week. And working remotely doesn’t mean you have to stay home. You could go to a work-sharing space or a coffee shop with WiFi.”