Island life, as anyone who’s spent a lot of time on one can tell you, isn’t for everyone. Island fever can set in after any length of time: a sense of disconnection from the greater world; a separation from friends and family who aren’t inhabitants of your island; a lack of stimulation from cultural diversity; difficulty in accessing amenities that you had grown accustomed to. A feeling that if you are, somehow, a territory of a country, there’s still a feeling of neglect.

Still, some find the relative isolation comforting and secure. You have everything that you really need. No Starbucks, no Walmart, no Home Depot, but, you can take whatever transportation you have access to and make the journey to town where you can find these places and, anyway, there’s always Amazon.

The residents of Island Village have torn allegiances between Orange County—particularly Seal Beach—and Long Beach, which annexed the previously unincorporated area of LA County when its developer, Beard Development Co., of Newport Beach, broke ground for construction in 1972. 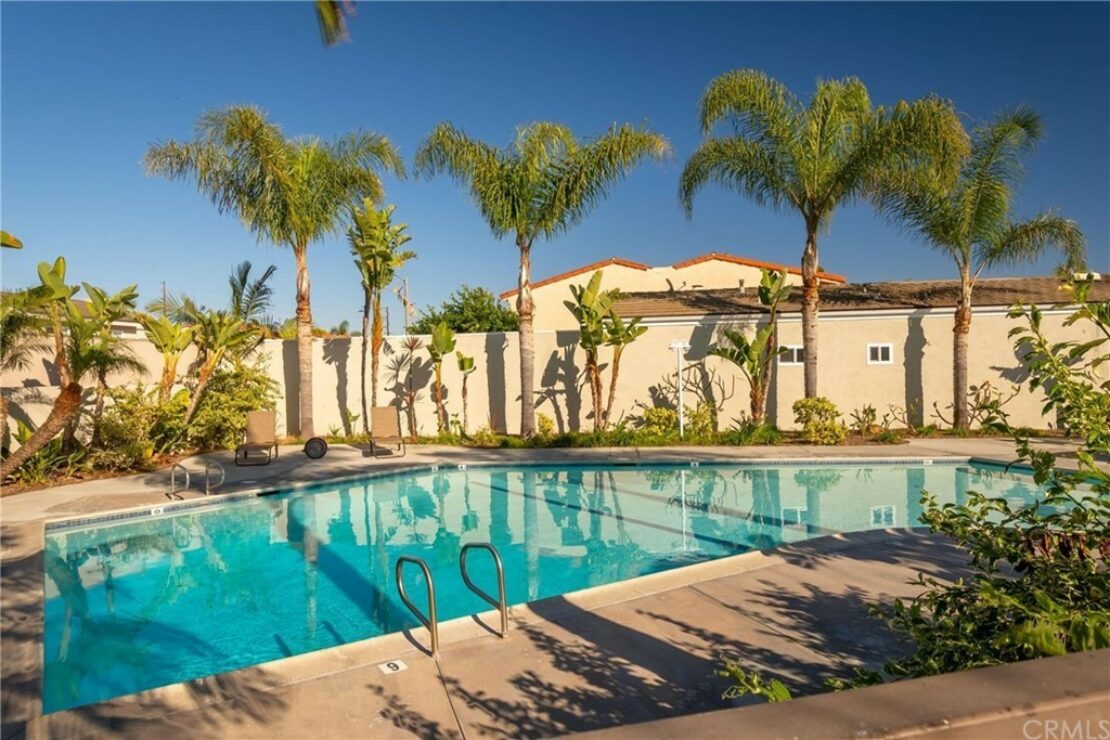 One of two community pools in Island Village. Listing photo.

Since then, there have been a couple of attempts by some Island Village residents to either slip under the nearby Orange Curtain to become part of Seal Beach, or to take leave of the Long Beach Unified School District and join the Los Alamitos district. Neither efforts have been successful. Annexing to another city in another county is extraordinarily complicated and difficult, and as far as schooling goes, the Los Al district wasn’t enthusiastic about adding new students at the time when Los Alamitos High School was in huge demand.

To somewhat mollify the residents of Island Village who were feeling isolated from the rest of Long Beach, the city in 2003 extended the Second Street name to replace Westminster Boulevard past Studebaker and eastward up to the entrance of the island.

The planned community of Island Village, which opened in the summer of 1973 with four home models with three or four bedrooms priced from $40,950 to $46,950 (at 7.25% interest or more), features a security gate and private streets that wind their way through its 20 acres of wandering greenbelts and past some of the complex’s amenities—two community pools, a large clubhouse and a tot lot and other greenspaces for the kids.

The homes are detached but built close together which gives them a bit of a townhouse feel.

The fact that homes don’t go on the market very frequently might indicate that people are content to live in the area, despite having to hop in the car to go just about anywhere other than a swimming pool or a clubhouse. Given that, many  do their shopping and dining in Seal Beach. 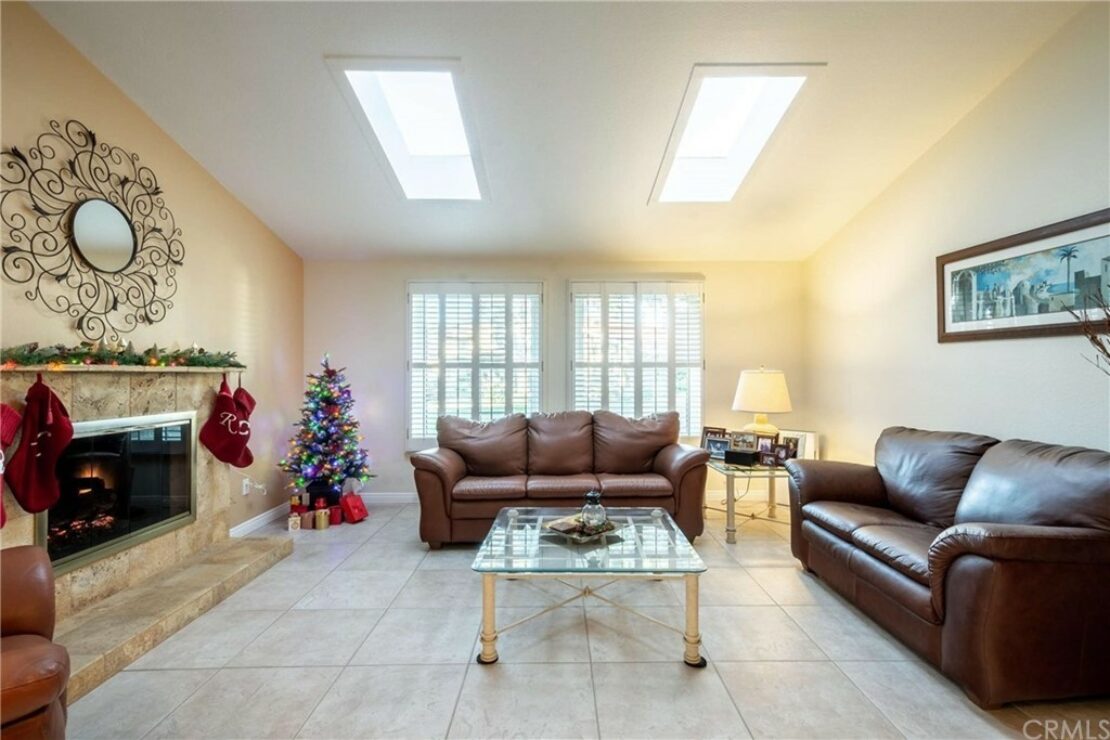 The living room of the Island Village home at 7029 Mariner Way. Listing photo.

There’s one Island Village home on the market now, at 7029 Mariner Way, listed by Realtor Craig Smith at $849,900. With four bedrooms and three baths spread over 1,811 square feet, it’s the largest of the four floor plans in Island Village. 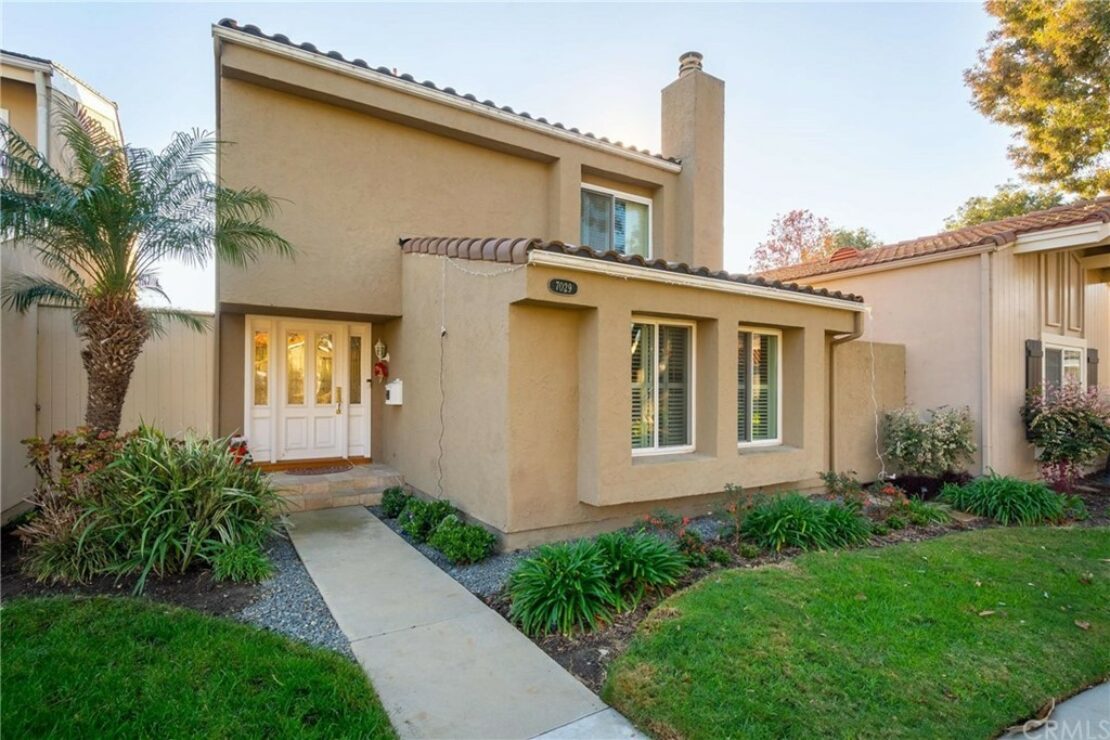 This Island Villlage home is on the market, listed at $849,900. Listing photo.

Downstairs has one bedroom with a bathroom, a large living room with a pair of skylights and a wood-burning fireplace, a combination kitchen/family room and a dining area. The other three bedrooms are upstairs.

The home has a covered patio accessible from the kitchen and the downstairs bedroom. The roof is tile and the front of the house faces a large greenbelt.

The homes in Island Village don’t have big backyards but, instead, private courtyards along the side of the house.

In addition to your mortgage payments, there is a $250 per month HOA fee.