Long Beach houses cost too much for locals, so who's buying them? • Long Beach Post News
- ADVERTISEMENT -
Help us light up the city; Add your home to the 2022 Holiday Lights map. CLICK HERE

The cost of homes in Long Beach is growing at such an unsustainable pace—with double-digit increases annually in recent years—that, while it can’t go on forever, nobody is hazarding a guess as to when it will stop.

Some people claim that it’s a bubble, but it’s not like the subprime loans that brought about the collapse of the mid-2000s. The increase in housing prices remains a combination of good old supply and demand along with still-low interest rates.

The real estate site Redfin issued a report predicting an increase in house prices of a mere 7% this year, thanks in part to a predicted increase in interest rates to nearly 4%, but its report covers homes throughout the country, where the median house price is now at its highest point of $369,975. Do you know many detached, single-family homes you can buy in Long Beach—or in Los Angeles for that matter—at that price?

Fewer than a handful. The least expensive in LA that is still on the market (there are cheaper ones, but they all have offers pending) is a two-bedroom, one-bath, 740-square-foot fixer-upper on Hammel Street in East LA. 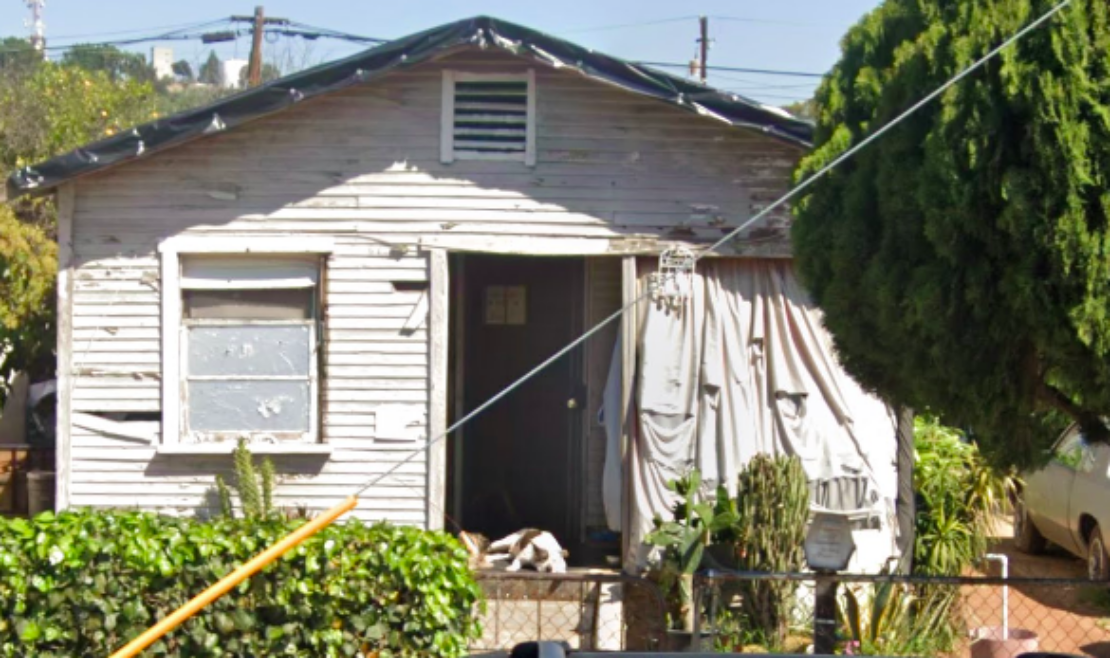 This East LA home was the least expensive home in LA that’s still on the market. It’s listed at $375,000. Google Street View screenshot.

To find anything more affordable and more desirable you’re going to have to go where there’s scorpions.

Back in the late 1950s and throughout the 1960s, houses in Long Beach were affordable for a single-earner blue-collar family, and those houses, priced mostly in the very low five figures, were built as quickly as people snapped them up. According to CalMatters, in the late 1960s, the average California home cost about three times the average household’s income. Now it costs more than seven times what the average household makes. That’s statewide. In Long Beach, where the median household income is $67,804 and the median list price is $735,000, that’s almost 11 times a household’s annual income. So, basically, the typical Long Beach home is unaffordable for the typical Long Beach household. It’s a roundabout way of telling you something you already know.

So, who’s snapping up a home in Long Beach? In many cases it’s people moving here from even more expensive places.

The Cliff May rancho-style Mid-Century Modern homes in East Long Beach, for instance, are virtually all selling well above the $1-million mark thanks, in part, to the creative class moving to the area with their paychecks from Hollywood and high-dollar advertising agencies.

“It’s been axiomatic for a number of years that Long Beach is the most affordable beach community,” said Realtor Phil Jones. “So that’s still what’s drawing people here.” People like, say, LA County District Attorney George Gascón and California State University Chancellor Joseph I. Castro, both of whom own homes in Long Beach.

The difference in housing prices that makes Long Beach a bit more desirable than other coastal cities, though, is beginning to dwindle.

“The median purchase price home in Long Beach has gone up 41% in the last five years,” says Seiji Steinmetz, professor and Chair of Economics at Cal State Long Beach. “That’s more than the increase in LA and Orange counties, and while the prices are still lower in Long Beach, the gap is closing between Long Beach and the rest of the metro area.”

Relativity aside, homes in Long Beach are undeniably expensive, says Steinmetz. “To buy a median-price home in Long Beach, you’d better be prepared to pay $144,000 for the down payment, as well as $3,600 a month for mortgage and other costs.”

The trend toward telecommuting is a big contributing factor in terms of people who have the means to live in Long Beach. Justin Sidell, who sells homes in the Los Altos area, says, “Before the pandemic, Long Beach wasn’t that attractive to people who worked in LA and had to commute to work every day. But now, with more and more people working from home, they’re finding the city very attractive. A place that would cost $1.8 million in LA they can get for $1.2 million in Long Beach.” Most, he said, are people, often in the tech industry, with high-paying jobs.

Knock a bit off those paychecks, says Sidell, “and maybe they can’t quite afford Naples or Belmont Shore, so they come to Los Altos, which is the next-best thing,” and it’s an area that’s seeing increasingly more million-dollar properties.

Recently, the frontier for homebuyers has inched northward. “People who are priced out of Long Beach are now looking in Lakewood,” says Sidell, who adds he’s sold four homes there in the last month.

Realtor Pat Cassara, who sells throughout Long Beach, scans the listing every morning to see what’s coming on the market. “North Long Beach used to be where I’d look first,” he says. “That’s where you’ll find the typical starter homes, places that were more affordable, but when they started hitting $750,000, that’s when I started scratching my head.”

Many of the buyers, says Cassara, are millennials—”young people making good money and coming here because it’s cheaper than the South Bay and LA.” Millennials are, indeed, buying houses at a rapid rate, and with, in many cases, reckless abandon. According to a report on one real estate site, about 80% of that demographic group is willing to offer a bid in excess of the listing price, 82% is OK with buying a fixer and 90% is willing to buy a house sight unseen, just relying on what they can find over the Internet. And, again, that’s a national study, taking in areas where houses are listed closer to $300,000 than $1 million.

For first-time home buyers in Long Beach, ‘It’s not a great spot to be in’