In terms of Long Beach real estate, North Long Beach is the final frontier. It’s a huge part of the city, home to about 20% of the city’s population, and it’s a diverse 20%—more than half is Hispanic, about 20% Black, 11% Asian, almost 9% non-Hispanic White and a fairly large number of Tongan and Samoan residents.

For decades, the area—first known as Fertile Farms with its fields of asparagus and sugar beets as well as dairy farms, and later as Virginia City before it was annexed with Long Beach at the end of 1923—has been a largely overlooked part of the city. It took more than 10 years after it became part of Long Beach before sewerage made it up north and the town was finally able to get rid of the blight and health hazards of frequently overflowing cesspools.

It took a while for roads to be built and for transportation to be brought into the area linking it to the rest of the city.

Almost 15 years after it joined Long Beach, the Long Beach Sun newspaper acknowledged Northtown’s plight in getting attention from Downtown and City Hall.

“North Long Beach’s position in the municipality is that of a rapidly growing boy in a family,” the paper said in an editorial.

“His clothes are never  big enough for him. His wrists protrude from coat sleeves and his trousers have a high-water effect. It seems impossible for the provider of the family to quite keep up with the lad’s growth.”

North Long Beach wasn’t always at the tail-end of the city’s neighborhoods. The uptown area was fairly popular during the heydays of such businesses as Lou’s Books on Atlantic and, of course, Dooley’s Hardware on Long Beach Boulevard, but it was most commonly thought of as a rather drab working-class neighborhood that, while growing in population, hadn’t evolved much from its hardscrabble roots.

Today, though, things are improving rapidly in North Long Beach, with the term “Uptown Renaissance” popping up regularly in conversations about the neighborhoods north of Del Amo Boulevard. Developers and restaurateurs have flocked to the area in the past few years, with projects such as Uptown Commons, LAB Holdings’ The Beat, The Uptown, the ARTery and others opening or planning projects in the neighborhoods.

With those and other improvements in the works, North Long Beach can be thought of as a promising place to start for first-time buyers looking to get a foothold in the real-estate market.

A few years later, Richardson got married and the couple had a pair of children and an extra paycheck. They leveraged the equity of his first house and bought a new, more spacious, two-story home  with 2,100 square feet, four bedrooms and three baths in the Collins neighborhood close to the Lakewood border in 2017.

“I’m 37 now, and North Long Beach is still the place for good value,” he said.

North Long Beach might still be the best place to start out and build your wealth in Long Beach, though, of course, it takes a bit more wealth to start out these days than it did a dozen years ago.

The home, on a cul de sac just north of Del Amo Boulevard (making it in South North Long Beach), has excellent curb appeal thanks to a flipper-like landscaping job featuring garden lighting and those freshly-planted palm trees that, like kittens, are great when they’re new, but they grow up and begin attacking things without warning. Keep up with the gardening and you should be fine. 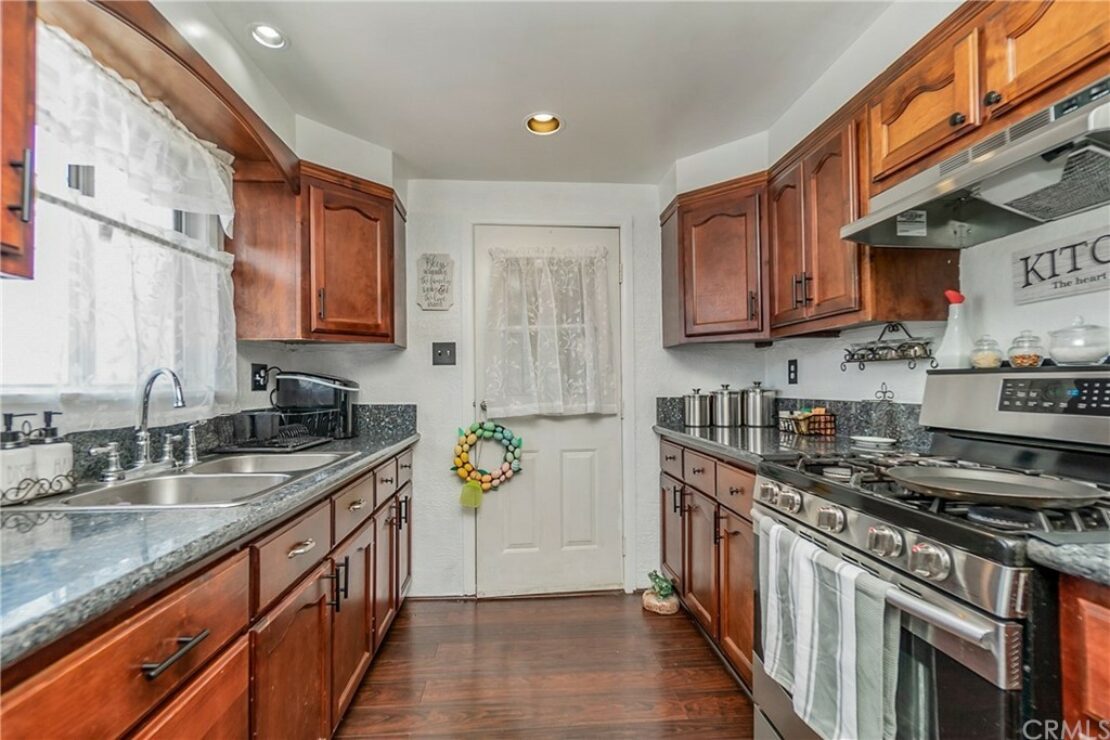 The kitchen in the house at 421 Silva St. is on the large side with plenty of storage. Listing photo.

The backyard is large and pleasant with a nice covered patio and a large yard. The bedrooms are a bit more than ample and the kitchen is large, though too narrow for an island. Still, it has handsome cabinetry and plenty of storage space.

A well-priced house, at $530,000, at 6153 Brayton Ave., is described in its listing as being “in the heart of Long Beach,” though it’s actually in the heart of North Long Beach, in the Grant neighborhood, not far from Houghton Park. 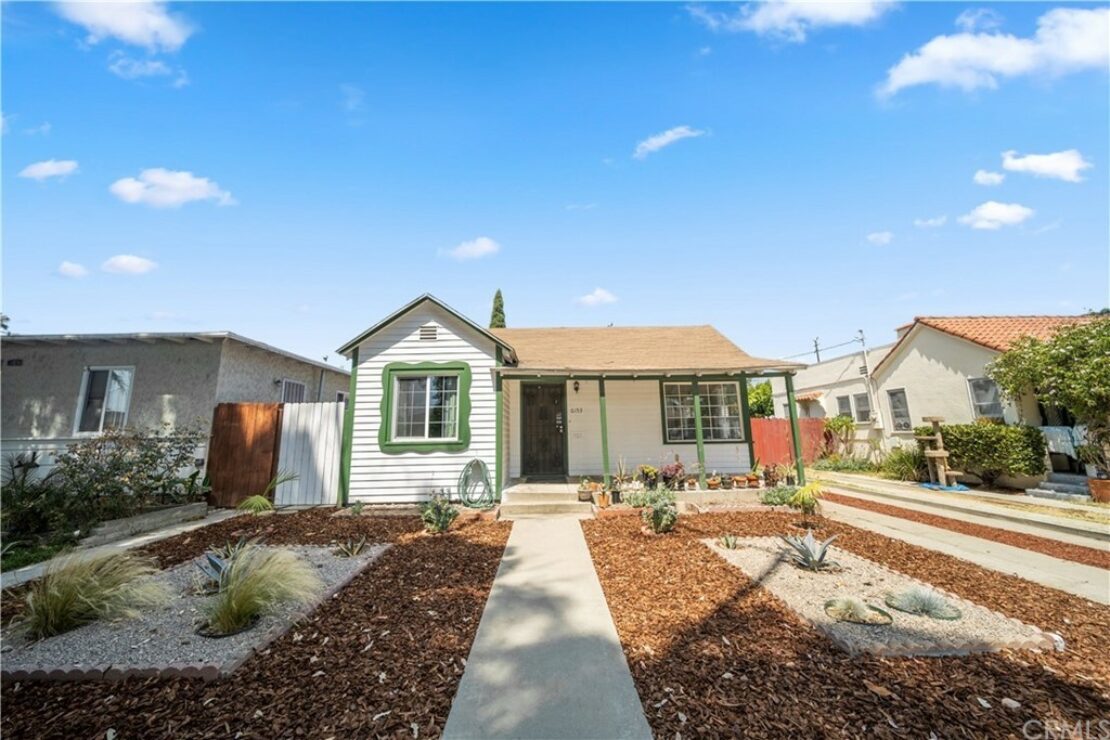 The bungalow has two bedrooms, though a bonus room that’s all done in knotty pine for a decidedly rustic look, can be used for a third bedroom (and, if I was still a 7-year-old, I would totally declare this room for myself).

The 1938 house has refinished hardwood floors, a bright and airy dine-in kitchen and a fair-sized backyard where you’re free to scatter around some grass seed if you want a lawn.

Finally, at 1427 Michelson St., there’s what’s called a “cozy” home, at 864 square feet. And it is cozy in the good way. The generous backyard and oversized front porch add to the living area, especially in Southern California, where it’s always nice outside. Both the front and back yards are nicely landscaped, while indoors, the original hardwood floors give a warm feel to the living room. 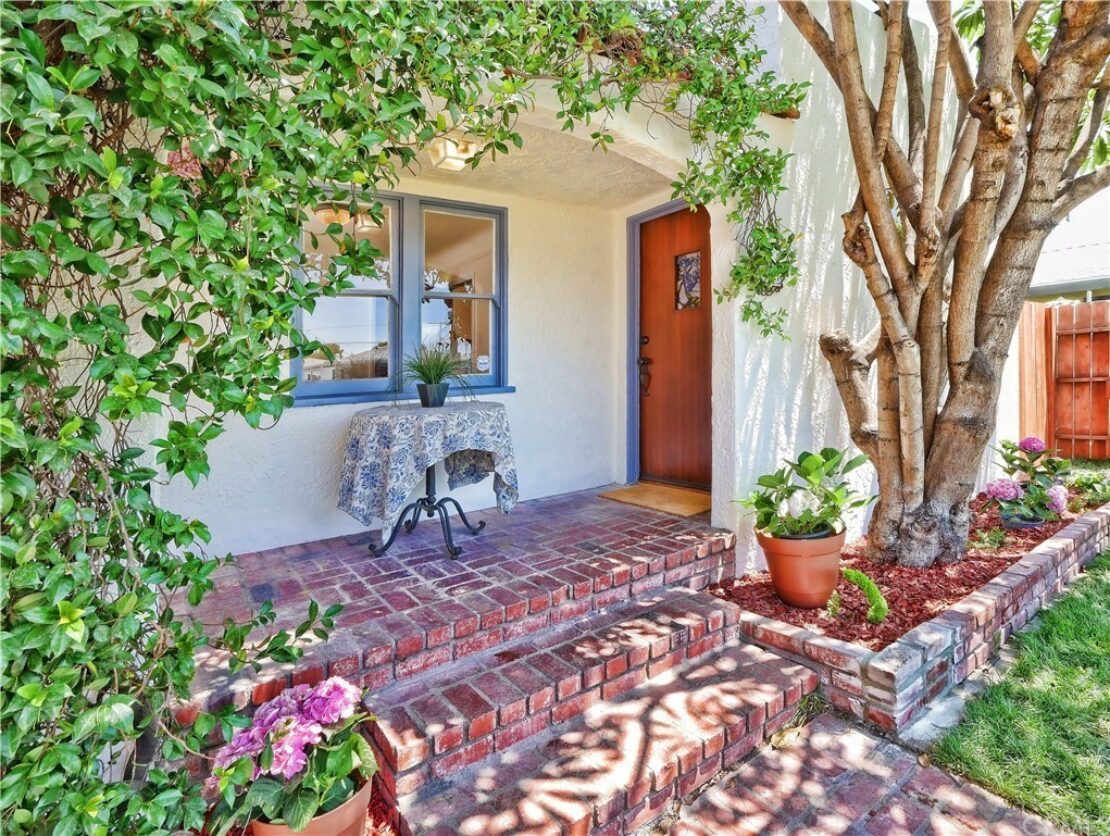 The inviting oversized front porch is a nice feature of the home at 1427 Michelson St. Listing photo.

The 1930 home has nice dark wooden built-in cabinets in the dining room, and the one bath is a nice, big one, also featuring built-in storage.