Let’s try this again. Once again on the market, listed, again, at about $3.2 million, is the historic George Hathaway Bixby Ranch House at 11 La Linda Drive in Los Cerritos.

It’s beyond me why no one has snapped this place up. It’s listed this time by Spencer Snyder and Bobby Bowden of Nationwide Executives. I first wrote about it in October 2018, when it had already been on the market for four months, and it remained on the market for a few more months, with not so much as a nibble, according to its owner of about 25 years, Duane Rose.

OK, sure, there are a few reasons why no one’s “snapped it up.” The price tag, while the world is neck deep in billionaires, and millionaires are as common as kittens, may be off-putting to some buyers. And imagining the upkeep of the eight-bedroom, seven-bath and God-knows-how-many-other-miscellaneous-rooms home, to say nothing of the 30,492-square-foot lot upon which this mansion sits, makes me want to take a long nap. 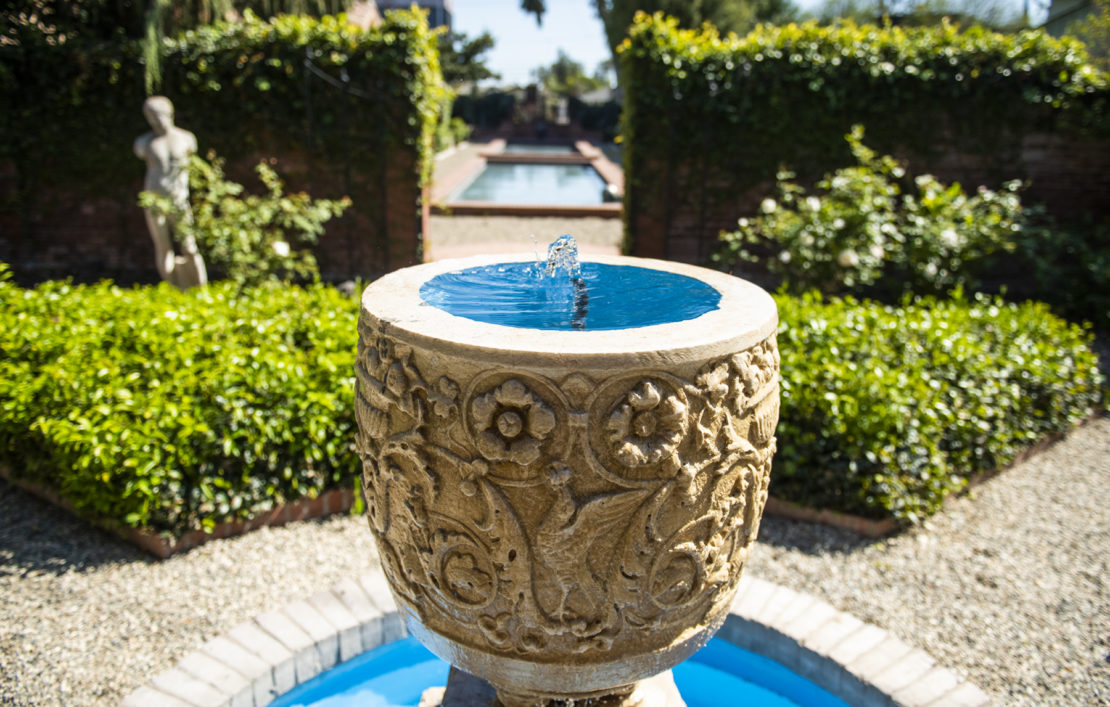 An original water fountain and the reflection ponds at the Bixby Ranch House. Photo by Thomas R. Cordova.

But that’s a problem for the attendants, who would be a built-in expense for whoever buys the ranch house. There’s plenty of room for them and the house, at almost 7,000 square feet, is so large, with so many rooms and nooks, studies and libraries, a banquet-ready dining room and a dedicated music room—there’s a good chance you’ll never even see the help, or anyone else living in the house. On a recent visit, I was forever losing track of our photographer and Duane Rose, who pointed out, whenever we happened to stumble upon him, various points of interest in the home.

And the house is a story in itself. It’s quite possibly the most historic home in the city, standing comfortably alongside, in status if not location, the Greene and Greene Adelaide Tichenor residence on Ocean Boulevard, or the Bembridge House in Drake Park.

Jotham Bixby, owner of Rancho Los Cerritos and generally considered to be the father of Long Beach, gave his son George the 10-acre parcel on which to build his family home. And the house built in 1890 by George and his wife Amelia, who had enough children and workers to fill the place with their four boys and three girls and seven servants, is essentially the home that’s for sale now, with a few upgrades over the years—electricity, for instance—but also more modern touches such as an upgraded kitchen and forced-air HVAC.

When the house was built it was the sole structure in the area, which was still a working rancho and the home served as a sort of ranch headquarters. It might’ve looked like Andrew Wyeth’s Christina’s World painting, rising above the fields of the rancho.

While the Dutch Colonial residence is huge and, perhaps, imposing, it is comfortable inside, with window seats in virtually every room, and six fireplaces scattered about, including one that’s bracketed by massive Bernini-style Baroque spiral wood columns. Original leaded-glass windows and bookcases, mellowed oak flooring, exposed redwood beam ceilings, imported English oak paneling, intricately carved concealed cabinetry, bay and dormer alcoves in the upstairs bedrooms are just a few of the features. 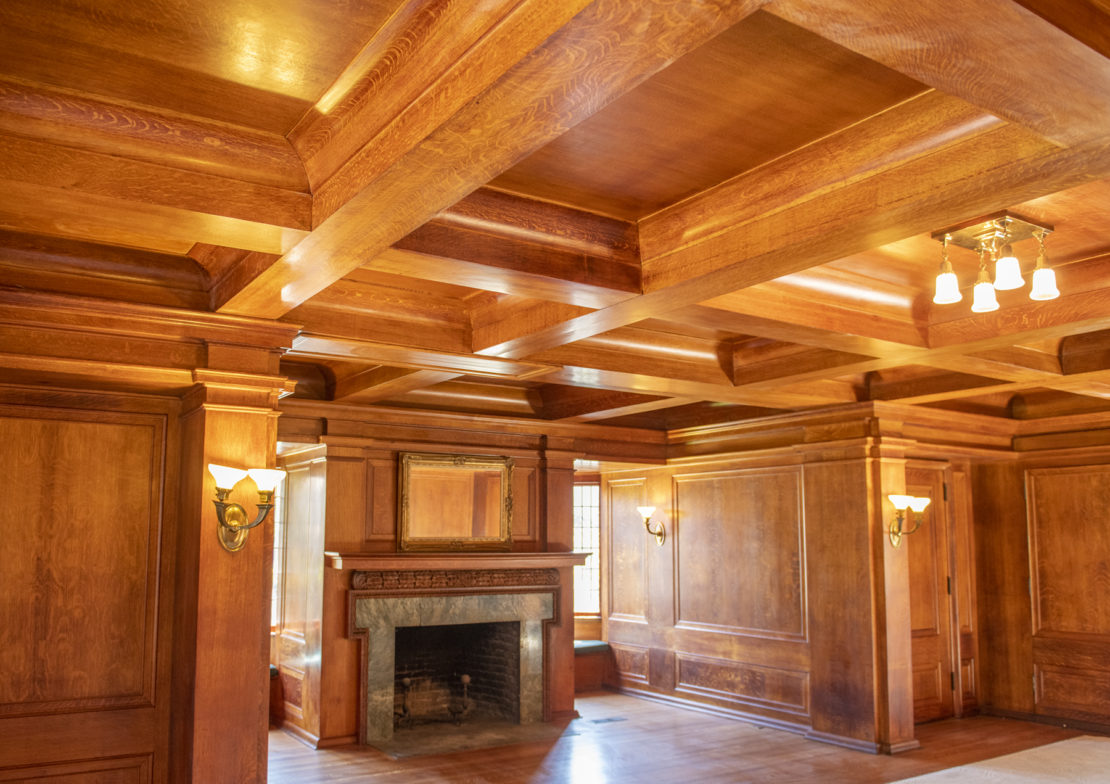 One of the amazing rooms with one of the home’s six fireplaces. Photo by Thomas R. Cordova.

The grounds are expansive with towering eucalyptus and plenty of spots large enough for a pool or three. The most striking area outdoors is a pair of reflecting ponds that were formerly lily ponds.

The Bixby family lived in the home until George’s death in 1920, when Tulsa oilman Thomas Gilcrease purchased the house and its surrounding acreage.

Thomas Gilcrease was, in fact, a more notable figure than George Bixby, at least outside of Long Beach. One-quarter Creek Indian, he was born in 1890 in Robeline, Natchitoches Parish, Louisiana, but his family, as a part of the American Indian resettlement program, was moved from Louisiana to the Tulsa suburban town of—get this: Bixby, Oklahoma.

Because of Gilcrease’s Creek heritage, he received 160 acres of land near Tulsa and, when oil was struck in 1905 in the area, it made Gilcrease a multi-millionaire by the time he was 20.

In 1920, Gilcrease and his wife Belle and their two sons moved to Long Beach and bought the Bixby House and settled in to make more money not only from the newly producing Signal Hill oil field, but also in real estate as Gilcrease subdivided the 10 acres of ranch land around his house into 45 parcels which would eventually include the La Linda neighborhood.

He didn’t hang around to watch the neighborhood grow, though. His heart was in Tulsa, perhaps in more ways than one.

Gilcrease divorced his wife Belle in 1926 and moved back to Oklahoma where he married again, this time to a 20-year-old former Miss America named Norma Smallwood. That marriage ended in a spectacular and well-publicized divorce in 1934.

Meanwhile, ex-wife Belle stayed in the house until 1929, after which the house stood vacant for years until it was purchased by the Kameroff family in the 1940s.

In 1989, Drs. Sam Piccone and Nancy Good bought the Bixby Ranch House for $800,000 and set about restoring the historic mansion to its original glory, with noted preservationist/builder Peter Devereaux, who gave the place a thorough overhaul that included raising the home’s crumbling foundation and restoring almost all the rooms. 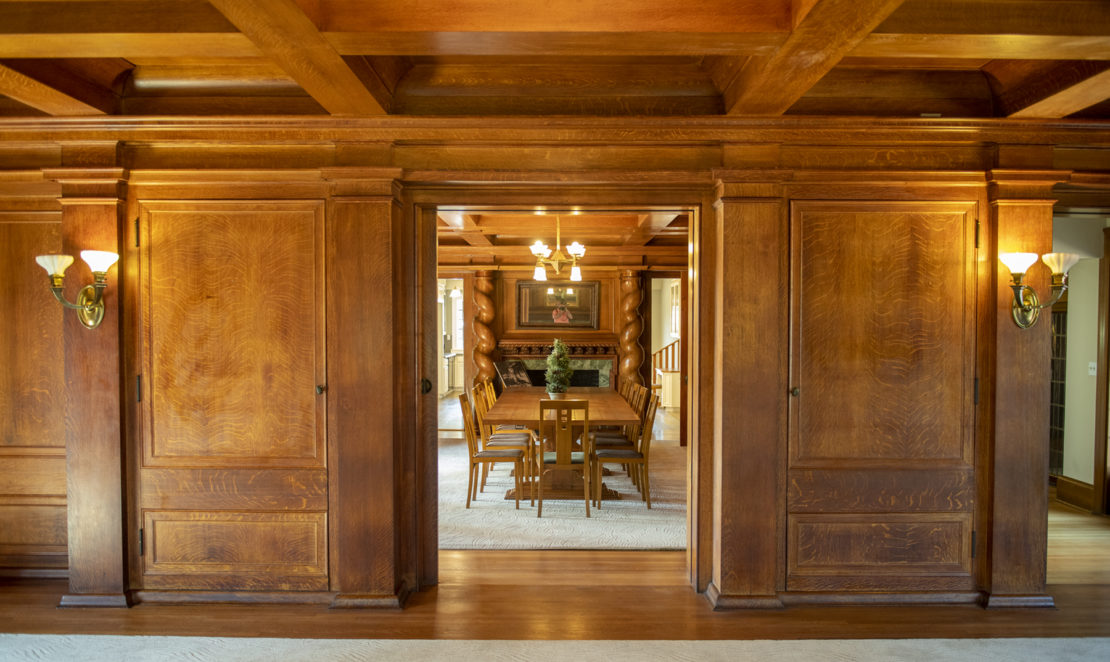 Through a doorway is the dining room, with a fireplace bracketed by two Bernini-style spiral wood columns. Photo by Thomas R. Cordova.

Twenty-five years ago, Duane Rose became the fifth and current owner of the home on La Linda. He has been a devoted and generous steward of the property, winning an award from the preservation group Long Beach Heritage for restoring the reflection ponds on the property, and he has regularly allowed dozens of civic and charitable organizations, including the Cancer League, Musical Theatre West, St. Mary Medical Center, the California State Floral Association and many others, to use the home for parties, social events, tours and fundraisers.

When I told him he must rattle around living alone in the mammoth mansion, he said that he’s rarely alone, thanks to his inviting so many people into the home, and not just charitable and civic groups, but also neighbors and friends.

He currently lives in a home he designed and had built next door about three years ago, and he also owns a third house in the 35-home La Linda neighborhood that’s been a gated community since 1979.

As for the Bixby House’s future, Rose said, “I just want it to be a good home that’s appreciated by good people. Whoever buys it can make changes, but I’d hope they’ll love it for its history and for what it is.”

Thomas Gilcrease died in May 1962. During his lifetime he spent millions of dollars amassing art and artifacts from the American West, all of which is contained in Tulsa’s Gilcrease Museum, considered to be among the world’s largest and most comprehensive collections of fine art, artifacts, and archives dealing with the American West.