The proposed 30-story American Life Hotel Project that would replace the empty lot where the former Jergins Trust Building once stood moved one step closer to reality Thursday night with approval from the Long Beach Planning Commission.

The commission voted to certify an environmental impact report and approved site plans and a local coastal development permit that will move the project along to a vote by the City Council.

Perhaps most important was an approval by the commission to allow the project a three-year window to begin construction.

However, Steinhauer was optimistic that once the convention and cruise industries come back online the hotel would thrive. He reiterated that point again Thursday, the same day that the convention industry made a formal plea for opening guidelines as COVID-19 rates continue to decline in the state.

The project has been delayed since 2016 when the City Council originally reached a deal with American Life to develop the vacant lot where the Jergins Trust Building once stood. It faced issues with financing, with the pandemic complicating its timeline, but developers are now confident in moving forward with the project, Steinhauer said last month.

The hotel would become one of the city’s tallest buildings at approximately 375 feet, and one of its most recognizable with a proposed 130-foot tall lighted-spire to extend upward from its 28th floor. 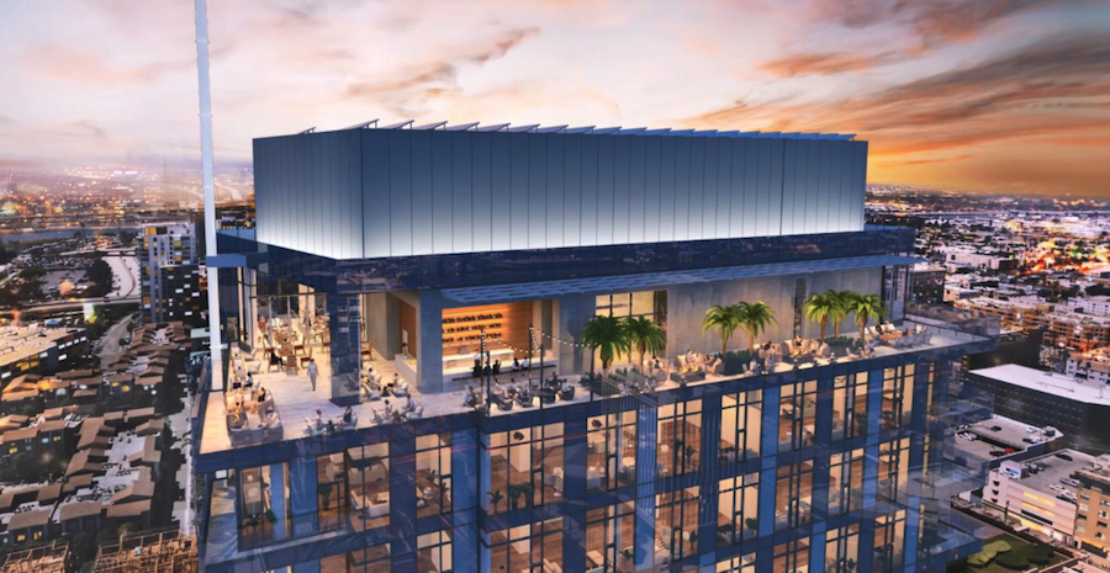 A rendering of the proposed rooftop restaurant that could be part of the American Life hotel project.

Conceptual plans for the hotel include ground level and rooftop restaurants, both which will be open to the public as well as meeting and ballroom space. But one of the more intriguing elements is the restoration of the historic Jergins Trust Tunnel, which runs below Ocean Boulevard.

A condition of approving the project requires American Life to bring the tunnel back to life as part of the development of the hotel.

Plans unveiled to the commission Thursday showed what amounts to a mini-museum with historic images, interpretive wall panels and artifacts planned to adorn the historic walkway. A potential agreement with Long Beach Heritage could also provide the public with tours of the tunnel in the future.

The hotel developer will also be required to make improvements to Victory Park, a section of land where The Loop art installation currently sits, and incorporate a 10-foot wide walking path that wraps around two sides of the hotel to preserve public space.

A potential headache for the hotel operator will be the annual Acura Grand Prix of Long Beach. The last condition of approval requires the hotel to work with the Grand Prix Association in event staging which could preclude use of the Pine Avenue and Seaside Way, the two access points to the hotel’s valet parking area.

Once the hotel opens it will also be required to maintain an off-site parking lease agreement for 280 spaces. The developer currently has an agreement to use parking spaces at the Terrace Theater, but if those spaces are not available a plan to have backup spots must be approved by the city.