President Joe Biden said at a rally in Long Beach Monday night that now is not the time for politics.

Biden entered the stage in a quad near the auditorium at Long Beach City College to a cheering crowd of about 1,500 supporters as the song “California Soul” played in the background.

The president—his first visit to Southern California since defeating former President Donald Trump nearly a year ago—came to support Newsom in the face of a recall election on Tuesday. He flew into Long Beach Airport at about 6:15 p.m. on Air Force One. 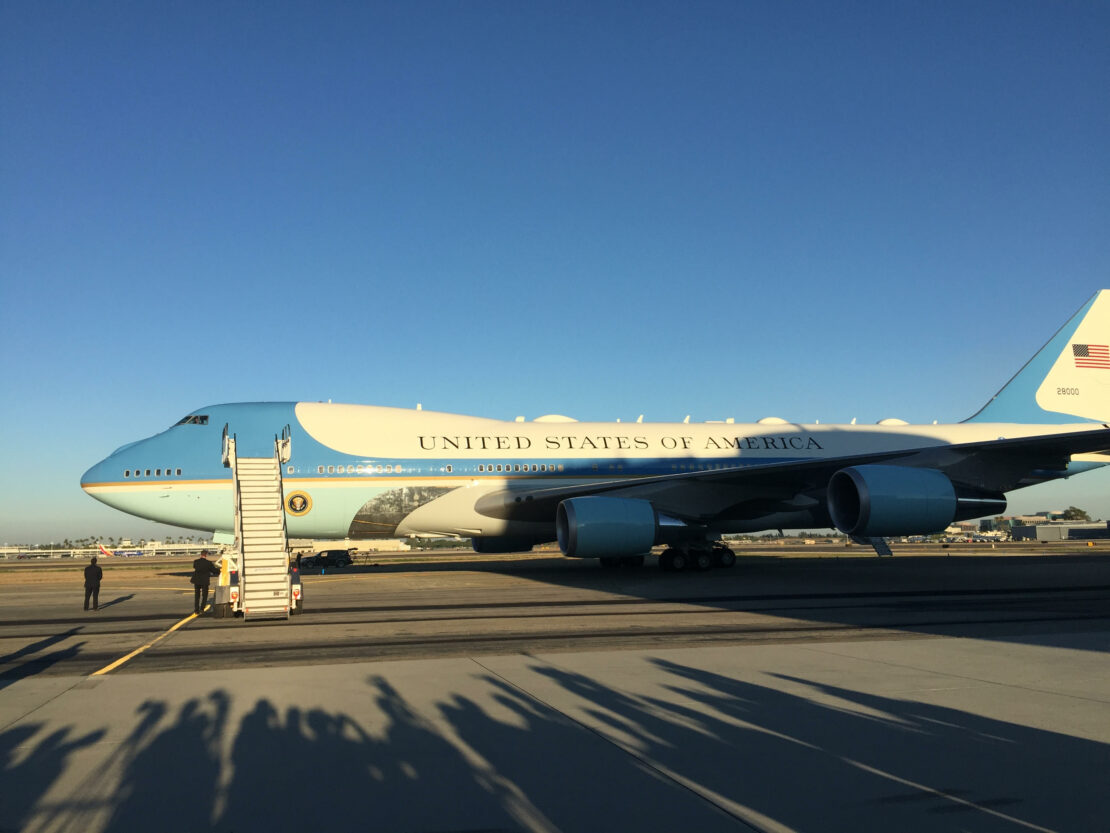 He described Newsom’s top Republican challenger, Larry Elder, as “the closest thing to a Trump clone that I’ve ever seen. … He’s a clone of Trump. Can you imagine him leading this state?”

Biden spoke as hundreds of protesters gathered on the streets outside LBCC, shouting expletives, yelling in bullhorns and honking horns. A chorus of protesters could be heard during Biden’s brief remarks, yelling “Recall Newsom!”

Biden and Newsom’s appearance at LBCC was the final rally of the governor’s campaign to defeat the recall effort.

Newsom said during the rally, before Biden spoke, that there is more at stake on the ballot Tuesday than just his fate. He said diversity is on the ballot, along with racial justice, economic justice, social justice and environmental justice.

The state, he said, needs a leader who can confront the pressing challenges of the state, including 7,400 wildfires exacerbated by climate change, with 2.2 million acres burned so far this year in California. “The hots are getting a lot hotter,” he said.

“The future matters,” he said, imploring those in attendance to vote by Tuesday.

Several local, state and regional officials spoke ahead of Biden’s appearance at the rally as a sheriff’s helicopter hovered overhead and crowds gathered on both sides of the political spectrum. 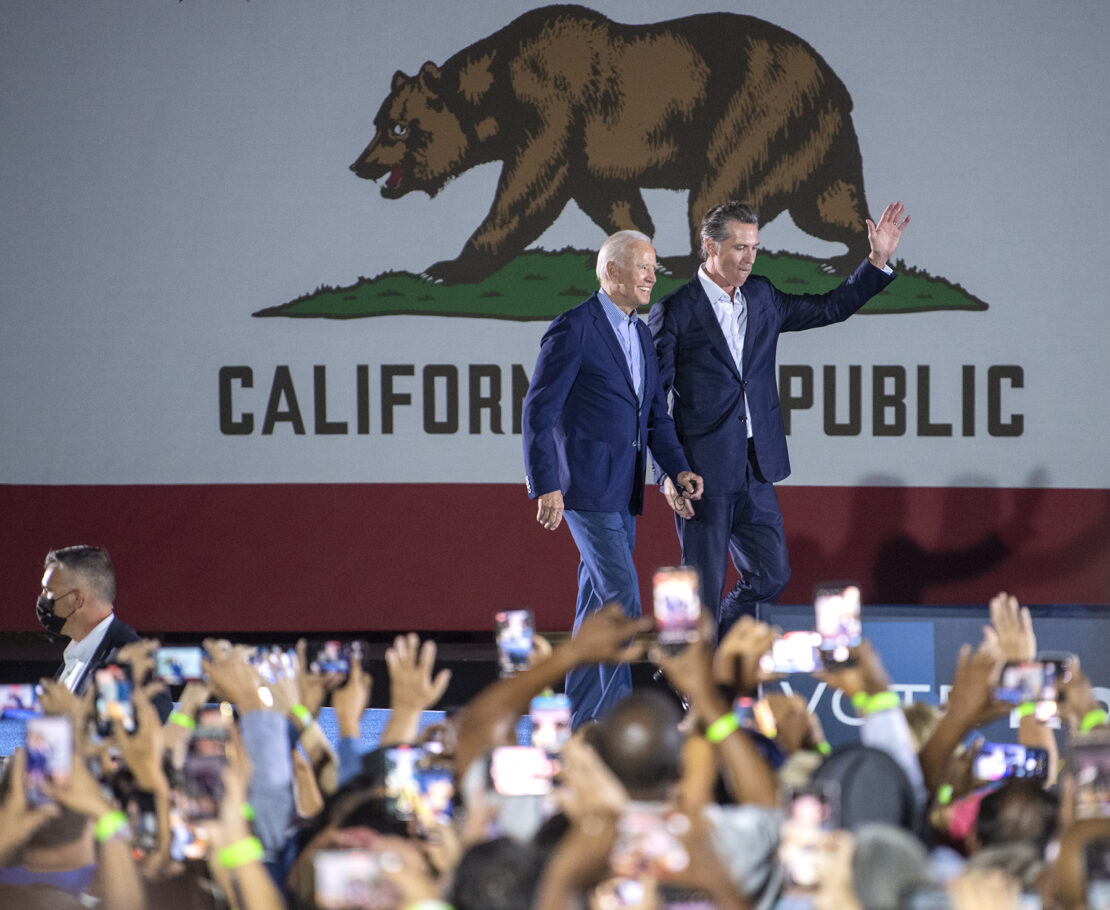 President Joe Biden is greeted by Gov. Gavin Newsom at a rally at Long Beach City College for the governor as he faces a recall. Monday, Sept. 13, 2021. Photo by Thomas R. Cordova.

Assemblyman Patrick O’Donnell spoke of the recall as representing two paths, one with Newsom, and one with Elder: “The path with Elder will take us back to the darkest days of the COVID-19 pandemic.”

State Sen. Lena Gonzalez called the recall a “shameless power grab” from Republicans who “know their agenda has no chance during a normal election year.” 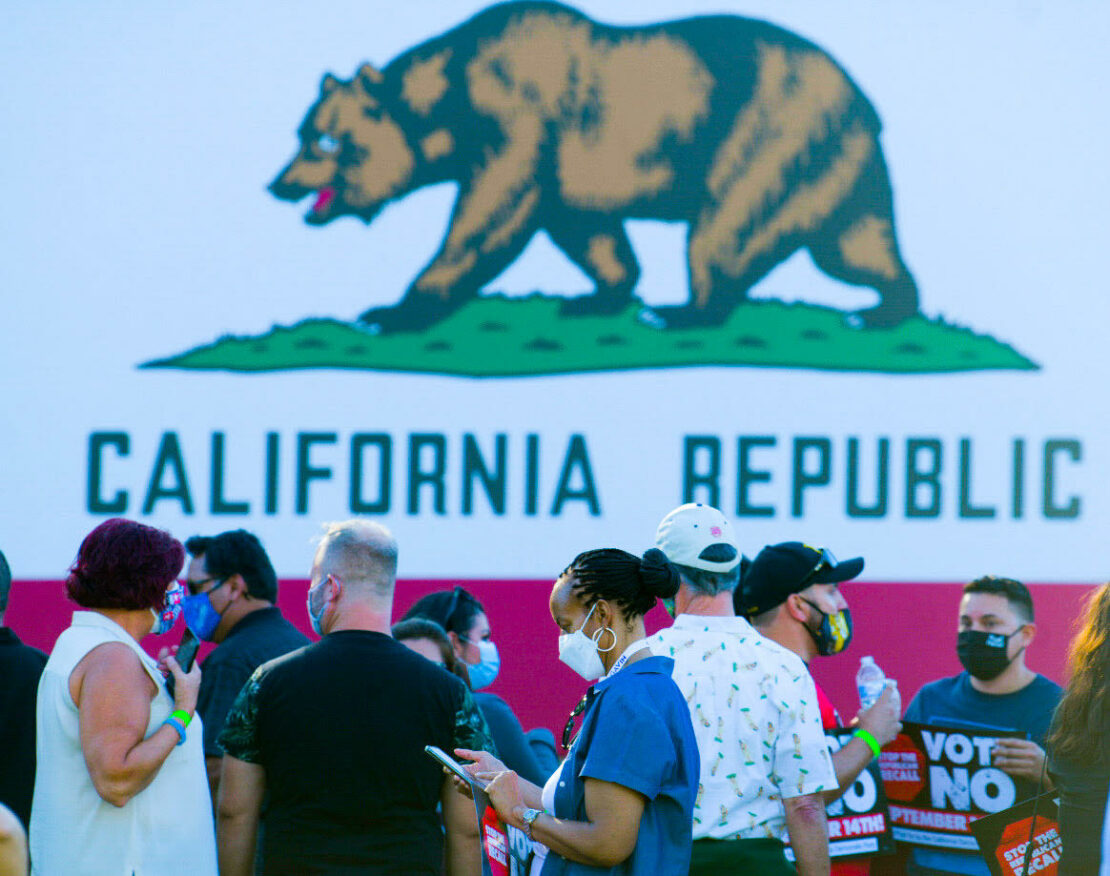 People file into Long Beach City College to hear President Joe Biden speak at a rally in support of Gov. Gavin Newsom, who is facing a recall election. Photo by Thomas Cordova.

Streets in Downtown near the Westin Hotel and in East Long Beach near the airport were blocked by security ahead of Biden’s visit. Traffic was expected to be heavy through the night and into Tuesday, when the president flies out.

Hundreds of people arrived early to hear the president speak in a courtyard near the LBCC auditorium, including Mark Kiss, a member of SEIU Local 721 in Santa Ana. He said he got a text from the local chapter to come to the event; the rally was not open to the public.

When asked if he already voted, he pointed at his mask, which said, “VOTE NO.”

Hundreds had also gathered in front of LBCC to protest the president’s visit, at times mocking those who came to the rally and yelling expletives.

Dozens have gathered at Long Beach City College to protest President Joe Biden and Gov. Gavin Newsom, who are holding at event at the school this evening. @LongBeachPost pic.twitter.com/fcaWOV0lHf

The crowd screams “fuck you” and “traitor” as the @POTUS motorcade arrives at @LBCityCollege. pic.twitter.com/ZIUSKALqFj

Newsom has been stepping up his campaign activities in recent days, campaigning in Northern California last Wednesday with his longtime ally, Vice President Kamala Harris.

Elder, a Republican talk show host, dismissed the presidential support for the governor.

“If Gavin Newsom thinks that flying in Joe Biden and Kamala Harris—not exactly the most admired government officials at the present time—will make him look better, that’s all you need to know about how oblivious and detached Newsom is from a large majority of Californians,” Elder tweeted last week.

Newsom attacked Elder directly, as did many speakers at the Long Beach rally who painted those seeking to replace the governor as right-wing extremists.

Newsom going down the list of Elder's more criticized takes. Says he's "to the right of Donald Trump."

Elder attended a pair of events in the Los Angeles area on Monday, with another stop planned in San Pedro Monday afternoon and a volunteer rally planned in Costa Mesa Monday night.

Elder shot back at recall critics who have labeled it a “Republican” movement.

“There are 2 million people that signed that petition,” Elder said. “A good quarter of them to a third of them were the people who voted for him just two years earlier. I’m talking about Independents and Democrats. Sixty-three percent of Hispanics voted for him two years ago. Now the majority of Hispanics want him out.”

Biden is expected to spend the night in Long Beach, then depart for Denver on Tuesday morning for an event to tout his “Build Back Better” economic recovery agenda.

Earlier Monday, Biden stopped in Boise, Idaho, for a visit to the National Interagency Fire Center. He then stopped in Sacramento Monday afternoon to “survey wildfire damage,” according to the White House.

As Biden departs Tuesday, Newsom and his potential successors—nearly four dozen of them—will begin the waiting game as in-person voting enters its final day and the deadline arrives for people to return their vote-by-mail ballots.

According to the Secretary of State’s office, more than 8 million vote-by-mail ballots had been returned statewide as of Sunday. Nearly 22.4 million were sent to voters.

The recall ballot contains only two questions: should Newsom be recalled—removed—from office, and if so, who should replace him?

Voting locations will be open until 8 p.m. Tuesday. Vote-by-mail ballots will be tallied as long as they are postmarked by Tuesday. The ballots can also be dropped off at any voting location or county elections office, or placed in a ballot drop box.