Long Beach planners installed safety and cosmetic upgrades to a crosswalk near Ramona Park last weekend as part of a demonstration to show residents what type of street improvements are in the works for North Long Beach.

The crosswalk features a temporary bulb-out with traffic barriers, which shortens the distance people have to walk to cross the street. It also acts as an extension between the park and Indiana Avenue—a nearby residential street that was closed off to traffic during the pandemic to free up more room for pedestrians.

“It’s a passive demo project,” Long Beach planner Alejandro Sanchez-Lopez said of the crosswalk. “It’s really for residents to stop by and read, witness and enjoy it on their own time over the next 30 days or so.”

The city is conducting these small-scale demonstration throughout the year in order to collect feedback from residents, which will then be used to guide larger, more complex construction projects further down the line. This is all being gathered as part of a major redevelopment plan in North Long Beach called UPLAN LB, which had its first community meetings in 2018. 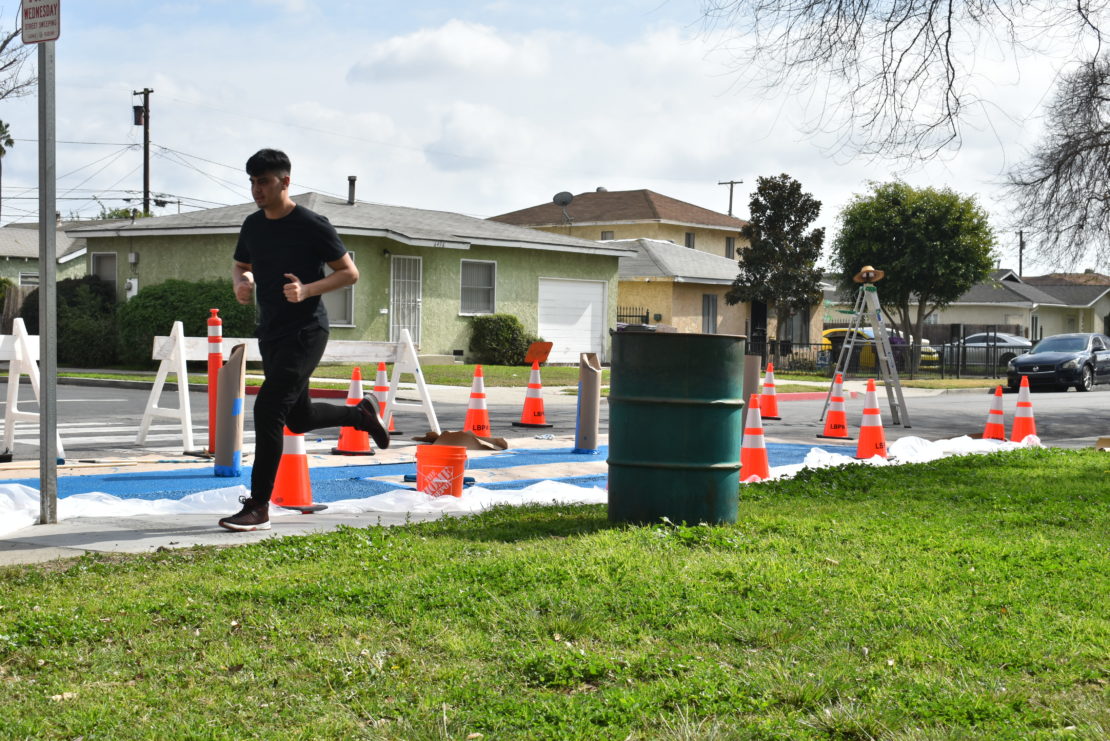 A jogger runs past a renovation project for a crosswalk at Ramona Park on Saturday, Feb. 13, 2021. Photo by Sebastian Echeverry.

Sanchez-Lopez, UPLAN LB project manager, said this initiative acts as a blueprint to guide city officials in the type projects developed throughout the northern part of town.

Feedback collected last year during a community walkthrough-audit of Ramona Park led to the crosswalk being built there, Sanchez-Lopez said. A senior center is across the street from the park’s tennis courts, and residents had expressed they wanted better pedestrian safety.

Both Councilmen Rex Richardson and Al Austin have announced various redevelopment projects happening throughout their council districts. Artesia Boulevard, Atlantic Avenue and Market Street are some of the three main thoroughfares expected to get upgrades over the next few years such as curb repaving, bike lanes and zoning changes.

Residents can participate and provide feedback on the projects through an ongoing virtual seminar at the UPLAN LB website.