A 15-year-old pilot project that the Long Beach Water Department initiated to test a new desalination filtration process could be removed later this year and require parts of Junipero Beach to be closed to the public.

The Under Ocean Floor Seawater Intake & Discharge Demonstration System was intended to study a new and less intrusive way of stripping the salt out of seawater to make it safe for consumption.

The project area is located between the Junipero Beach parking lot and the ocean and removing the system is expected to take about seven months, said Lauren Gold, a spokesperson for the department.

Gold said there will be some disruptions to the beach and a small part of the parking lot that will serve as a staging area, but the neighboring beach concession stand, Saltwater Deck, and the beach bike path will remain open to the public as crews work to remove the intake and discharge sites buried under the sand.

“We don’t anticipate that those would be simultaneous, so that minimizes the beach area closures at any one time,” Gold said in an email about the demolition of the desalination system. 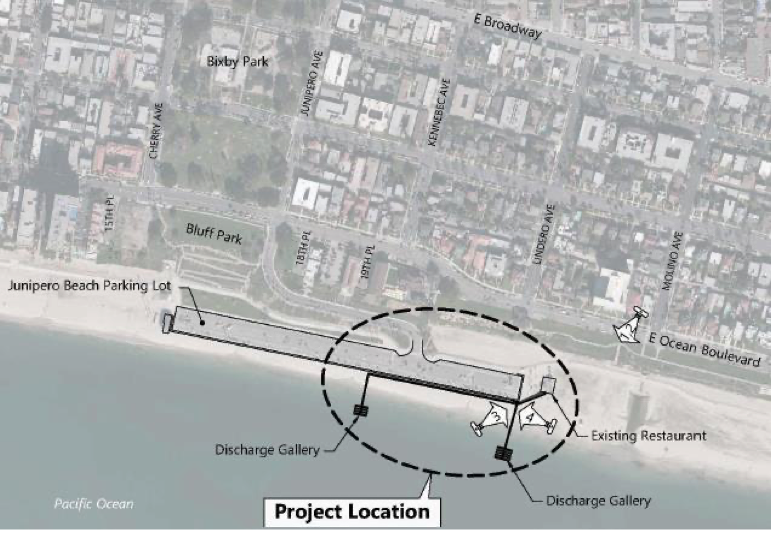 A map of the project site where crews could begin work later this year to remove the underground desalination intake demonstration facility.

The California Coastal Commission, which granted the permits to the department, is also requiring that removing the system has to happen between Labor Day and Memorial Day. Gold said that there is no hard date for work to begin but it should start shortly after Sept. 5 and last about seven months.

The project was part of what was the largest research project of its kind in the country and was capable of desalinating 300,000 gallons per day.

The underground Junipero Beach installation tested less intrusive ways to take water from the ocean and filter it for consumption while reducing the damage done to marine life. At the same time, an actual desalination site was installed in East Long Beach at the Haynes Power Plant that is operated by the Los Angeles Department of Water and Power. That site operated until 2010.

Tai Tseng, assistant general manager of operations at the water department, said Thursday the technology being studied at Junipero Beach worked, but the department would need to about 100 to 200 times the intake for a full scale facility, adding that the technology was feasible but not cost effective. The department’s groundwater treatment plant has the capacity to process 62.5 million gallons per day.

“That’s a lot of beach we’d have to take up,” Tseng said.

The Long Beach Water Department was looking at desalination in the early 2000s but has since focused on accessing groundwater, which makes up about 60% of the city’s water supply. The annual budget adopted Thursday included $41 million in investments into the city’s groundwater supply chain, including the development of several new wells.

A 2019 report prepared for the department listed scenarios where the city could look to desalination in the future. Desalination received high scores for being drought proof and for the potential for federal and state funding being used to build a facility.

It received the lowest score for the permitting process that would likely be difficult due to desalination plants’ potential to create greenhouse gases and harm ocean life, and was projected to cost more than three times the amount to create an acre-foot of water—about 326,000 gallons—than pumping it out of the ground.

In May, the California Coastal Commission unanimously rejected a desalination plant project in Huntington Beach that could have generated 50 million gallons of water per day due to concerns of how it would affect the environment.

California is in a third consecutive year of drought and state water officials have warned that more dramatic measures to conserve water could be announced in the coming months if dry conditions persist.