Thirty years ago in October 1992, the town of Avalon on Catalina Island became the first city on the West Coast to have its own municipal desalination plant.

It was developing technology at the time, and the city hoped it would provide a stable source of drinking water on an island 23 miles off the coast of Southern California with few other options.

“I don’t know what we would have done without desalination,” said Avalon Mayor Anni Marshall, who has lived here for 38 years. “It’s been a huge help for us.”

Today, Catalina has two desalination plants that strip salt from seawater, providing up to 230,400 gallons per day—roughly 40% of the island’s drinking water.

While desalination has been a critical tool for water security, officials said the island will have to make tough choices as its reservoir levels continue to plummet in the face of worsening drought conditions due to climate change. This summer will likely be California’s driest on record.

In one solution, Southern California Edison, which built the desalination plants and operates the water, electric and gas utilities on the island, is planning to add a third well for the plants for an additional 201,600 gallons of water per day. That would amount to a total of 432,000 gallons per day and supply more than 56% of the island’s drinking water.

“As recently as 2014-2017, Catalina customers faced severe water rationing due to persistent drought conditions,” he said. “Adding a third well will mean customers won’t have to ration nearly as much.” 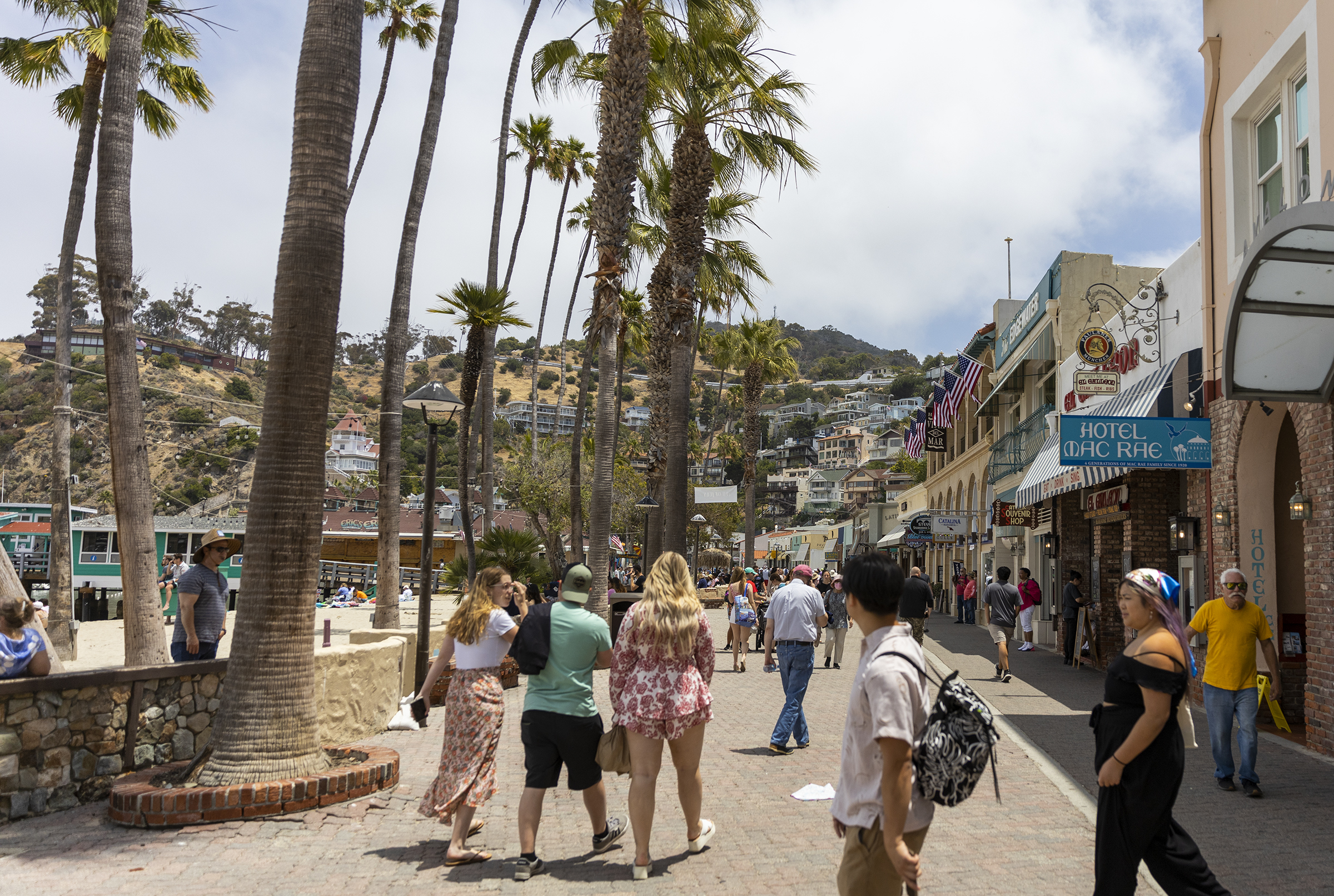 Tourists walk the streets of Avalon on Catalina Island Wednesday, May 25, 2022. Photo by Brandon Richardson.

Desalination technology has been around for decades but remains controversial due to the high costs and environmental impact. This month, the California Coastal Commission killed a longstanding proposal from Poseidon Water to build a $1.4 billion desalination plant in Huntington Beach noting concerns over the energy usage and location in an earthquake fault zone.

The proposed plant, which would have produced 50 million gallons of water per day, was supported by Gov. Gavin Newsom, but it faced staunch opposition from environmental groups concerned about marine life. The desalination process releases a heavy brine solution that’s pumped back into the sea and has the potential to kill marine organisms and disrupt the coastal food chain.

While Poseidon called the commission’s staff report a “death knell” for desalination, other planned projects, including one at Doheny State Park in Dana Point, are moving forward. The Doheny project would use slant wells that suck water from beneath the ocean floor to better protect marine life.

The proposed third well on Catalina will also require Coastal Commission approval, but the plan to add an additional 201,600 gallons of water per day has a much smaller footprint compared to other desalination facilities. California Coastal Commission spokesperson Noaki Schwartz said the agency is still waiting to receive the final proposal from Edison.

Even Long Beach at one point considered desalination. For four years starting in 2005, the city as part of a research project operated a 300,000-gallon-per-day plant at the Los Angeles Department of Water and Power’s Haynes Power Plant in East Long Beach. The project was ultimately determined too costly and the plant was closed.

Catalina added its second desalination facility at Pebbly Beach Generating Station just west of Avalon in 2016 in response to increased drought conditions. And by that time, the technology had greatly improved from the original plant built 30 years ago.

Leventhal said the second plant is roughly half the size and uses 30% less energy to produce the same amount of water. The third well would extend about 70 feet offshore and would siphon water under the ocean floor about 70 feet below the surface. Leventhal said it would allow both facilities to operate at a higher capacity.

The project would be funded through a $12.3 million grant from the California Department of Water Resources.

Southern California Edison is known as the region’s largest electrical company, but it also operates the water utility for Catalina in a unique arrangement made in 1962 when the island was struggling to find a supplier.

Catalina’s main source of water for its roughly 4,000 residents is groundwater, supplied through pipelines, reservoirs and wells. The Middle Ranch Reservoir, which serves as the primary gauge for the water supply, has seen drastically fluctuating levels in recent years as drought conditions persist.

In a severe drought in the fall of 2016, reservoir levels plummeted to less than 20% capacity (around 121 acre feet) for the lowest on record, prompting major water rationing. Water levels recovered with a wet winter in 2019, but levels are once again dropping with little rain this season.

As of May 12, the reservoir measured 629.27 acre feet, or about 60% capacity, compared to about 82% capacity last year at this time. Edison issues mandatory water conservation steps whenever the reservoir drops below 600 acre feet. 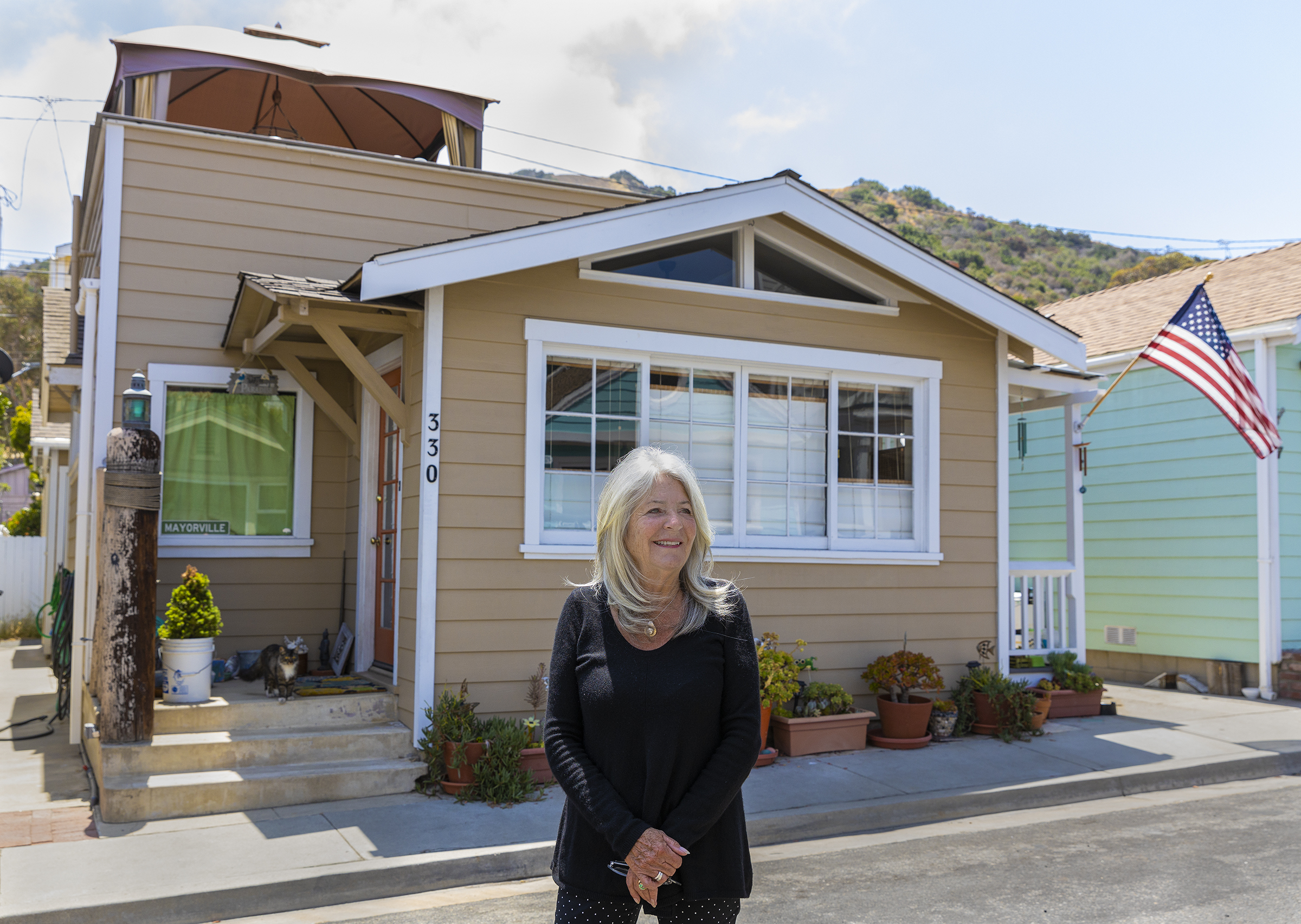 Avalon Mayor Anni Marshall stands in front of her home on Catalina Island Wednesday, May 25, 2022. Photo by Brandon Richardson.

Marshall, Avalon’s mayor, said she expects to see mandates as soon as next month. However, water conservation is a way of life on the island and most people have maintained the conservation habits from the major drought in 2016 when they were forced to cut water use by 40%, she said.

“Fortunately, a lot of those habits are still there,” she said.

Among the conservation efforts, Avalon uses saltwater in its toilets and many of the restaurants use plastic utensils and bottled water. Though that creates its own issues as the island’s landfill is about seven years away from capacity, said Marshall, adding that city leaders are considering other trash solutions.

On a recent sunny Wednesday in Avalon, the town was teeming with visitors from a cruise ship parked offshore. The city sees about 700,000 visitors annually, and business owners said tourism has rebounded to nearly pre-pandemic levels. And while that’s good for the local economy, it also means more water consumption.

In recent years, the town has replaced grassy patches with fake grass and installed Astroturf on athletic fields. A decorative water fountain in the town center is filled with mostly dead vegetation. 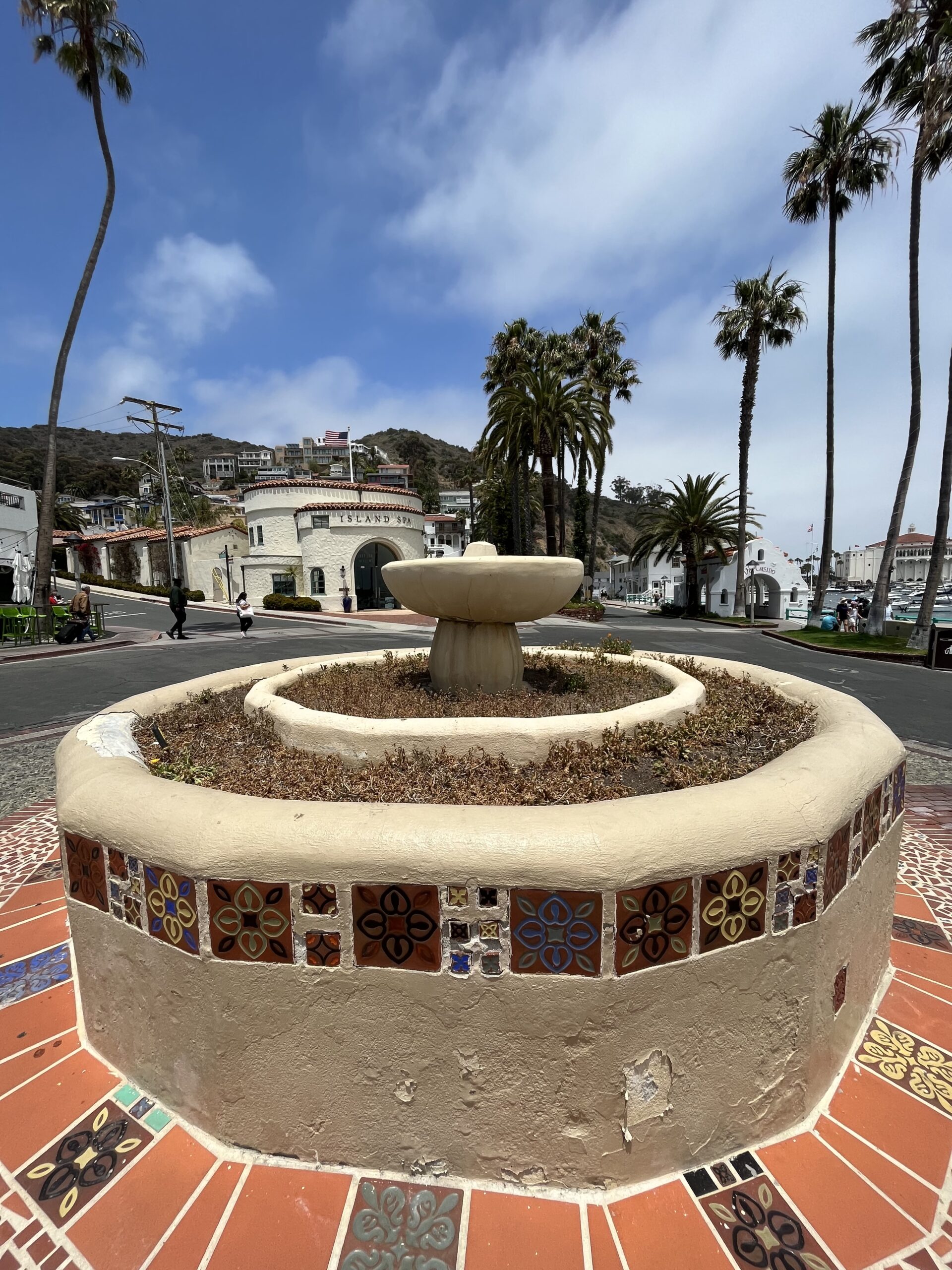 Unwatered plants replace water in a fountain on Catalina Island. May, 25, 2022. Photo by Kelly Puente.

Yolanda Say, manager at the Hotel Metropole, said the hotel in the worst drought years would ship its laundry to the mainland to save water. She said they might consider that measure again.

Say said the hotel in some rooms has removed bathtubs and installed water-saving shower heads. The hotel also has small signs in each room reminding guests to conserve water and encouraging them to reuse towels.

“The little things add up,” she said.

Catalina residents this year may also see significant hikes in their monthly water bills. Edison in 2020 filed a request with the California Public Utilities Commission for a general rate increase to offset growing operating expenses and drought-related costs.

The rate change, which is pending approval, could make the average monthly water bill jump from $72.45 to $101.48.

For Rosa Miller, who owns a children’s clothing shop in Avalon and has lived on the island since she was 7 years old, the water conservation is more urgent as the region sees persistent drought conditions.

To conserve, she keeps a bucket in her shower and then uses the excess water for her plants.

“Water has always been an issue for us,” she said. “We’ve been through this before, and hopefully we can survive it again.”