Juliane McCall remembers her first PRIDE festival in Long Beach in 1998 after she’d moved to Chicago to work here as a teacher. When she sat down to enjoy the parade and noticed some of her students were next to her, she was initially embarrassed until she realized they were there to support her community.

“That’s when I felt at home,” McCall said.

McCall was one of the dozens of members of the LGBTQ+ community who showed up Thursday night for a visioning meeting for a proposed cultural district along the Broadway Corridor between Alamitos Avenue and Junipero Avenue. The corridor has served as a safe space for the community for decades and is still home to multiple gay bars and LGBTQ+ owned businesses.

The city intends to highlight the contributions of the LGBTQ+ community along the stretch, but first, it wants the public’s input.

The 60-year-old McCall said it’s an important project and she’s hopeful that it will capture the history of the Long Beach community so it can be passed down to younger generations.

People milled around the Bixby Park Community Center placing sparkly stickers on poster boards to signify what kind of improvements to public amenities they’d like to see and what parts of LGBTQ+ culture should be included in the future design. 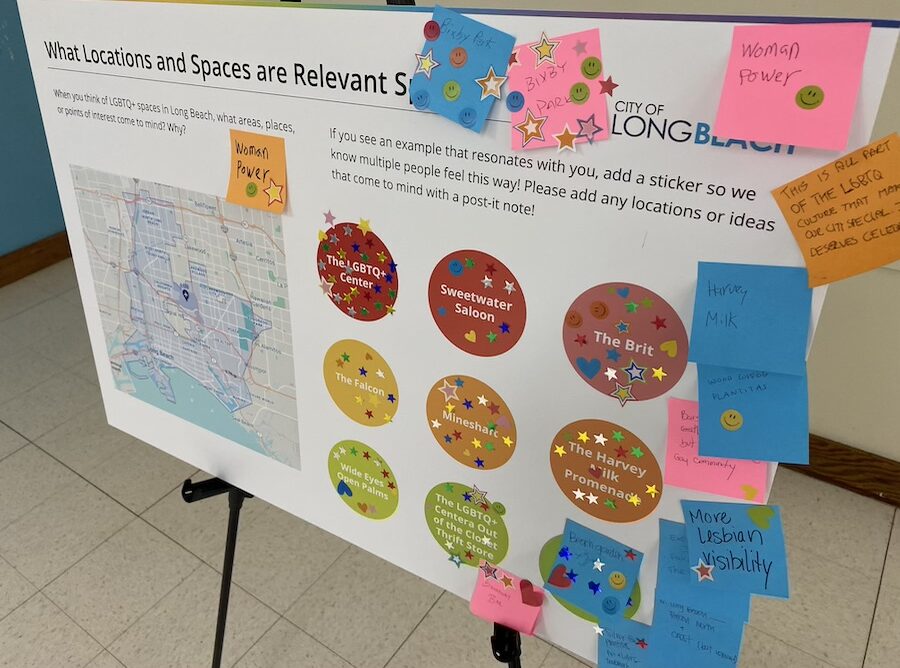 People placed stickers on vision boards at a meeting designed to get public feedback on the future LGBTQ+ Cultural District in Long Beach. Photo by Jason Ruiz

The idea to create the LGBTQ+ cultural district was approved by the City Council in June. Long Beach Development Services interim director Christopher Koontz has been leading the visioning process and said that the city has been looking at what other cities like Montreal, Toronto and San Francisco have done in similar projects.

Koontz said the city has been able to fund the planning process with other funds so the entire $1 million the council approved for the project should be available for improvements, but how far that goes will depend on what the community says it wants.

“Decorating sidewalks can cost tens of thousands of dollars, but putting in new lighting can cost hundreds of thousands,” Koontz said.

While stickers accumulated on aesthetic improvements like the Miles of Pride Lights that the city of Santa Monica installed during its Pride celebration this year and the rainbow-themed fleet of bikes that Toronto has deployed, some attendees said the needs are more basic.

Chad Roberts said he thinks Broadway has a lot of potential but the corridor needs to attract more businesses to fill the vacant storefronts before the city starts to install any kind of new lighting.

“Basically, Fourth Street, but gay,” Roberts said of his vision for the corridor.

Ken Osborn said he hopes that the investments made by the city are on things that will last, like murals. But Osborn pointed to the recent stabbing at The Mineshaft bar and said that the corridor could use some sort of bike patrol to increase the feeling of safety in the area.

“No people, no district,” Osborn said. “If they don’t feel safe coming down here, it won’t happen.” 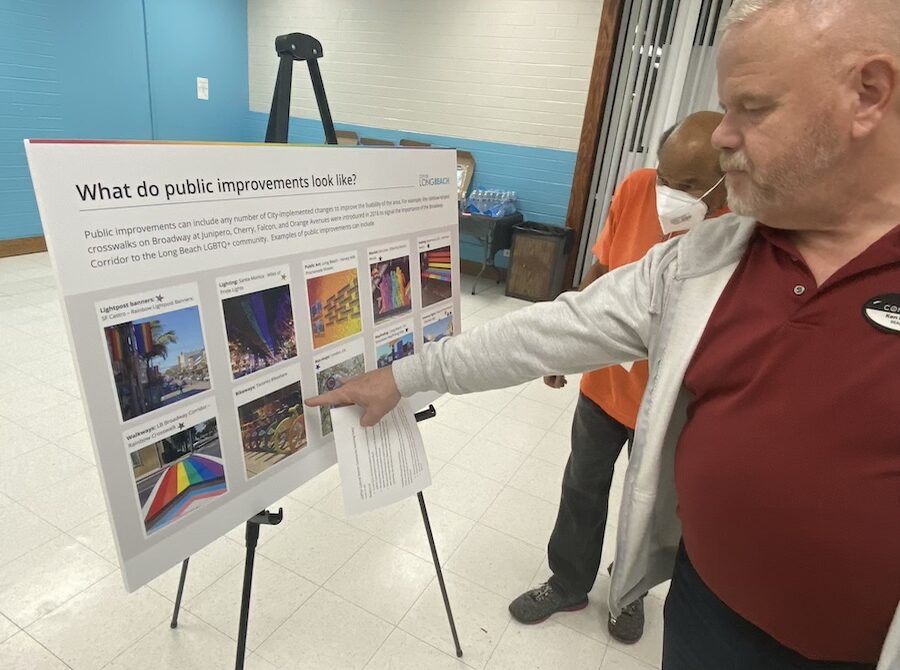 Ken Osborn points to a picture of the rainbow bikes deployed in Toronto as something he’d like, but first he said the Broadway Corridor needs to be made safer. Photo by Jason Ruiz

Who the district represents needs to be as diverse as the community it’s trying to celebrate, said Rod Dizor, who works for the Long Beach Imperial Court, the longest-running LGBTQ+ non-profit in the area.

Dizor said a “walk-of-fame” installation could be a nice way to honor those people in the community who have contributed to its history and having more festivals and events along the corridor could help continue to foster that sense of comfort that the corridor has provided to generations past.

“Being gay isn’t just one month out of the year,” Dizor said.

What most people seemed to agree on is that the project should develop a sense of community along the corridor and celebrate the history of the people who helped bring the LGBTQ+ community to this point.

McCall said it could include plaques commemorating organizations like the Imperial Court, which has raised funds and advocated for the community since 1971, or the AIDS Food Store, which has helped provide meals to people with HIV or Aids since 1985.

“It’s taken a team, the whole community to make this come about and we need to recognize all of those letters,” McCall said.

A city spokesperson said there are more community meetings planned over the coming months but details have not been released. A community survey will also be available through Nov. 9 as the city works toward bringing final recommendations to the City Council in the coming months.