Restaurants and bars were ordered in late November to stop all dine-in service as daily COVID-19 cases began to skyrocket across the Southland, but at least one Long Beach restaurant plans to host a New Year’s Eve meal Thursday night.

Dana Tanner, owner of Restauration on Fourth Street in Bluff Heights, said she has remained open for outdoor dining and will continue to serve patrons Thursday night despite a warning from the city’s code enforcement team.

Reservations for the “NYE Dinner Countdown” have been available through websites like Resy and Yelp for weeks. The menu, which includes Soy glazed black cod, beet crostini and dulce de leche pecan pie, has been promoted on the restaurant’s Instagram page which includes “We #Stayopen” in its bio.

Tanner was served with a warning from the city Thursday morning as posts surfaced on social media showing the restaurant’s plans to hold a dinner and New Year’s Eve countdown on its patio behind the restaurant.

The posts drew a strong reaction from community members who called the business selfish for hosting a potential “super-spreader” party even while area hospital ICUs fill up. But, in an interview, Tanner said she is not hosting a “party.” 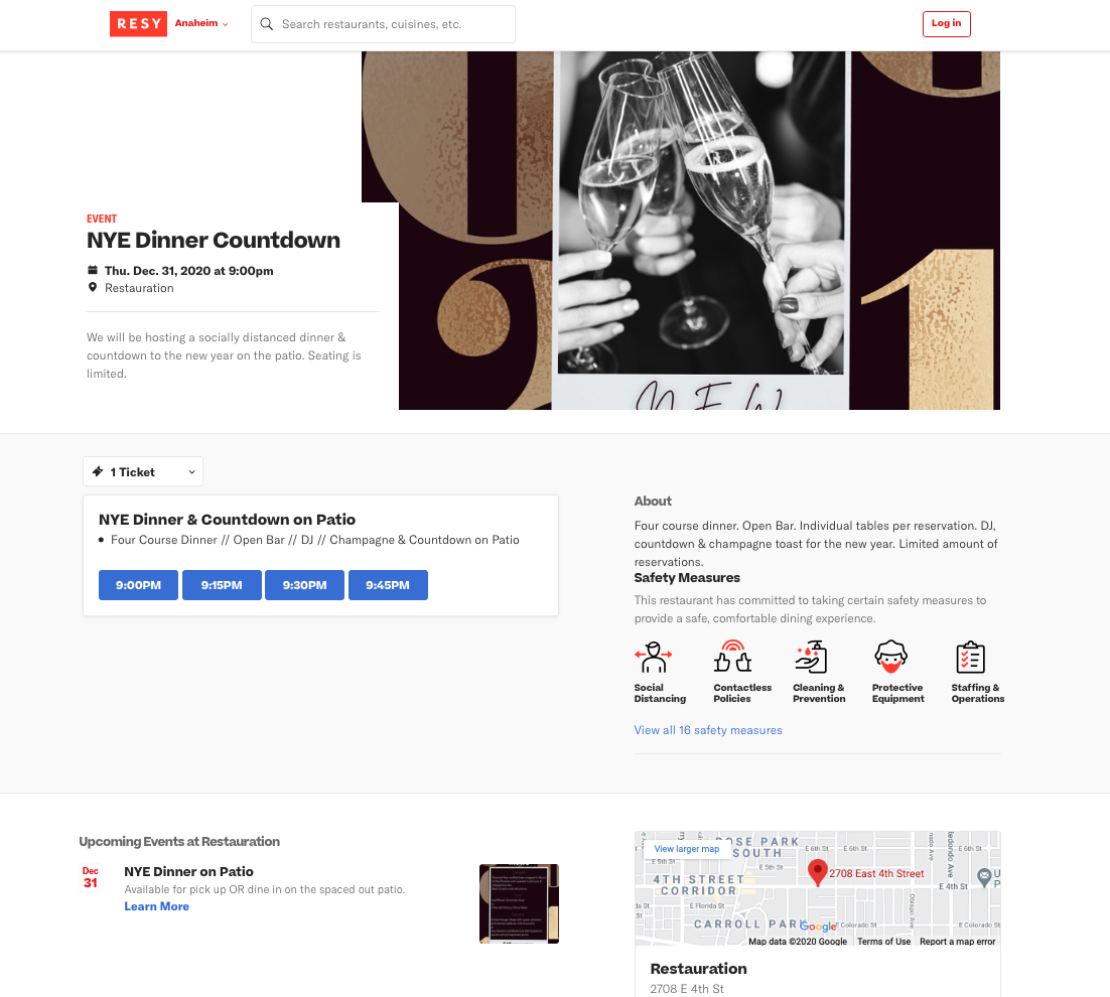 A screenshot of the reservation page on the website Resy where diners could make a reservation for the New Year’s Eve dinner at Restauration.

Tanner said her patio is about 1,000 square feet and she has about nine tables set up. She did not say how many people had made reservations for the dinner but said that at her current capacity it could be somewhere around 20 people.

The event includes a DJ and open bar in addition to a socially distanced dining experience, according to the Resy invite.

Tanner said her decision to remain open is economic. The restaurant reopened last year after a fire forced it to close for nearly a year.

But since the pandemic hit she and her staff have struggled to pay bills as the restaurant industry has been forced to shutter multiple times. Tanner said she’s even borrowed money from her parents to help pay the rent of her employees.

Thursday morning, Long Beach officials gave Tanner a notice that she was violating the local health order, which marks the beginning of the enforcement process, explained Angel Arredondo, an officer with the city’s bureau of code enforcement.

After the first notice, a followup inspection is conducted, and if further violations are found—like keeping outdoor dining open despite a statewide order banning it—a citation of $100 can be issued. The second citation would be $200 and the third and every subsequent citation would be $500.

The city is allowed to issue citations daily but the goal is not to tax business owners, Arredondo said. “We want voluntary compliance,” he said.

After the third citation, the issue could be sent to the city attorney’s office where stripping a business of its license could be considered. Whether that’s the needed remedy for the violation would be evaluated on a case-by-case basis, Arredondo said.

The city’s task force dealing with these kinds of violations is small, ranging from about four to eight people on a given day. The fact that they arrived at Restauration Thursday morning was due to numerous complaints filed with the city by residents concerned over emails and texts that they had received that they felt were advertising an illegal gathering, according to Arredondo.

Illegal or not, Tanner says her New Year’s Eve meal will still be served up on the back patio.

“I just wish more restaurants would join us in staying open and providing a safe dining experience,” Tanner said.