Long Beach Fire Department’s 21 firehouses are scattered throughout the city, often tucked into cozy neighborhoods. And, wherever they are, says firefighter-paramedic and department spokesman Brian Fisk, they’re expected to have the nicest lawn on the block.

The crews at each station follow the same maintenance regimen each week with a day for lawns and landscaping, days for polishing wood and brass, days for checking the lighting.

The crews at each station, too, have an intense pride in their firehouse and the work they do, and that pride is perhaps best typified in the logos they choose to represent them.

The chosen logos appear on the various engines, trucks and other apparatus, on the walls of the station, on patches and, perhaps most visibly, on T-shirts worn by crew members. Some are well known, like Zeep the Sheep at Station 2 on Third Street, and the “up all night” Batman on Loma Avenue and Fourth Street in Belmont Heights.

Others are less well-known to the city at large.

Here are some of the more interesting LBFD logos and the stories behind them. 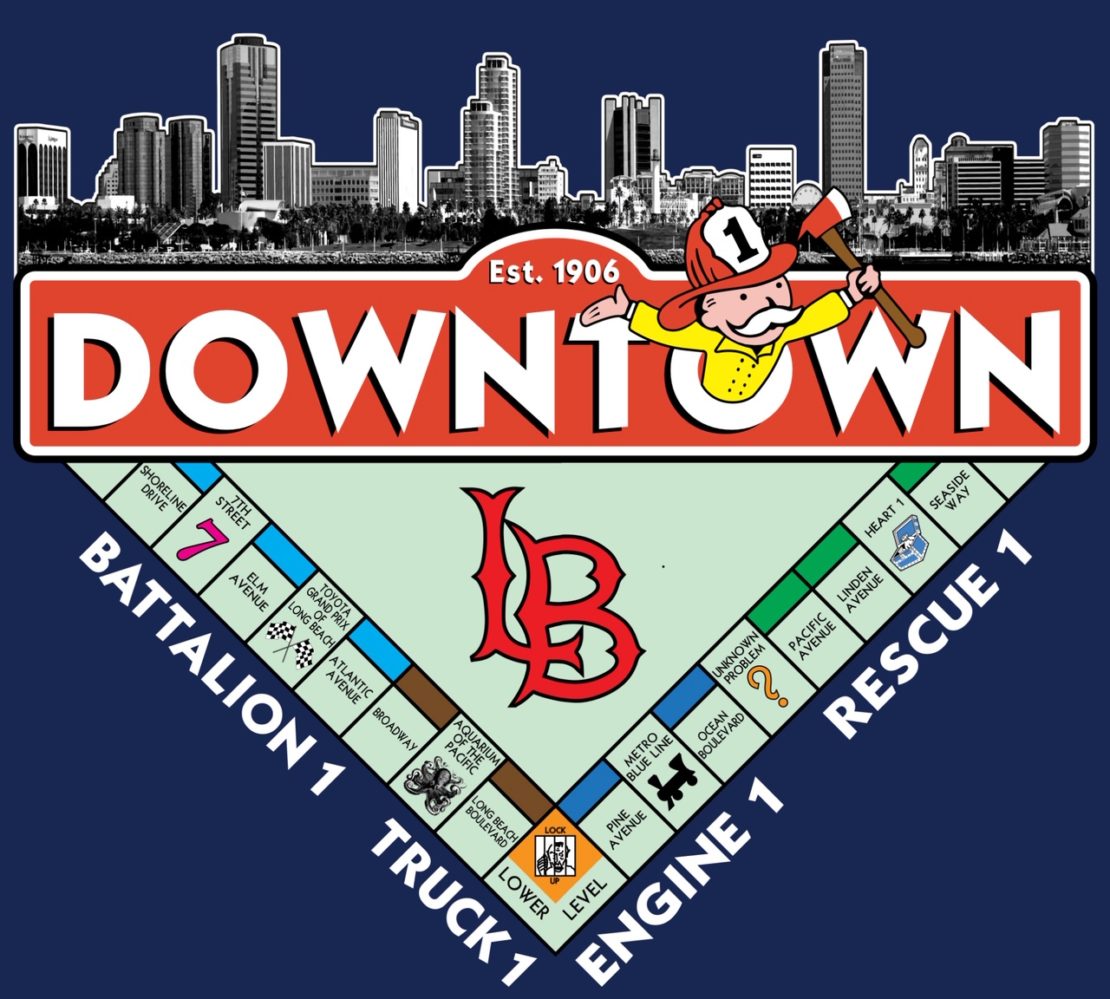 Station 1, 100 Magnolia Ave. The Downtown station used to be known as the Big House because it was, in fact, big, and it also had the most personnel. It’s since shrunk a tad in terms of firefighters, so it’s merely a large-ish house in that regard. Still, it’s No. 1, established in 1906, and it covers the historic heart of Downtown so now its logo is a takeoff on the Monopoly board game with names of Downtown streets, a Metro Blue Line station, the Aquarium of the Pacific and the Grand Prix of Long Beach. 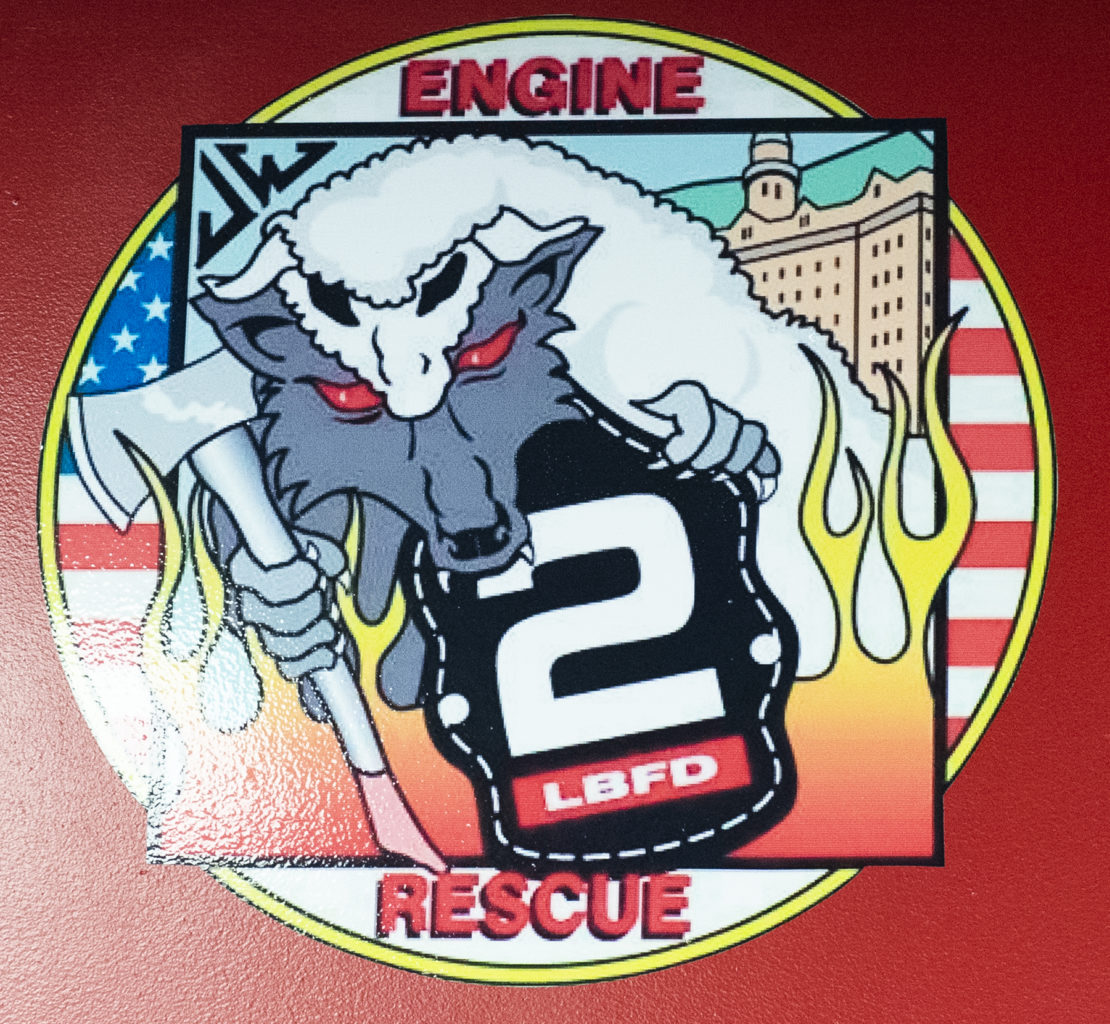 Station 2, 1645 E. Third St. The station’s logo and mascot is Zeep the Sheep, and it’s depicted on the station’s artwork as an ax-wielding wolf in sheep’s clothing, with the historic Breakers Hotel in the background.

Zeep is the department’s best-known and beloved mascot, says Fisk. The sheep had been part of a city’s nativity scene (featuring Zeep, as the Sheep) and when the whole church-state separation thing grew, it was tossed, along with the rest of the Christmas cast, in a Dumpster behind Station 14 near Marine Stadium. According to Fisk, the guys from Station 2 saw it and borrowed it and took it back to their station, where it’s been since the 1980s except for the several times it’s been kidnapped by cops, fraternities and other stations, but it’s always made it back home to 2. Fisk said it got its name after they disguised it as a zebra by painting some stripes on it, and when a crew from 14 came to reclaim it, they were told, “That’s not a sheep, it’s a zebra.” Or, rather a cross between a zebra and a sheep: a Zeep.

“They have a whole wardrobe for Zeep,” said Fisk. “They decorate it as a monster for Halloween, they paint it in rainbow colors for Pride weeks, it was Mario Lambretti during the Grand Prix. People in the neighborhood bring their kids over for pictures every time it changes.”

For COVID times, Zeep carried a message painted on its side advising visitors to “keep baaaaaack. 6 feet.”

To keep track of Zeep, check out its Facebook page. 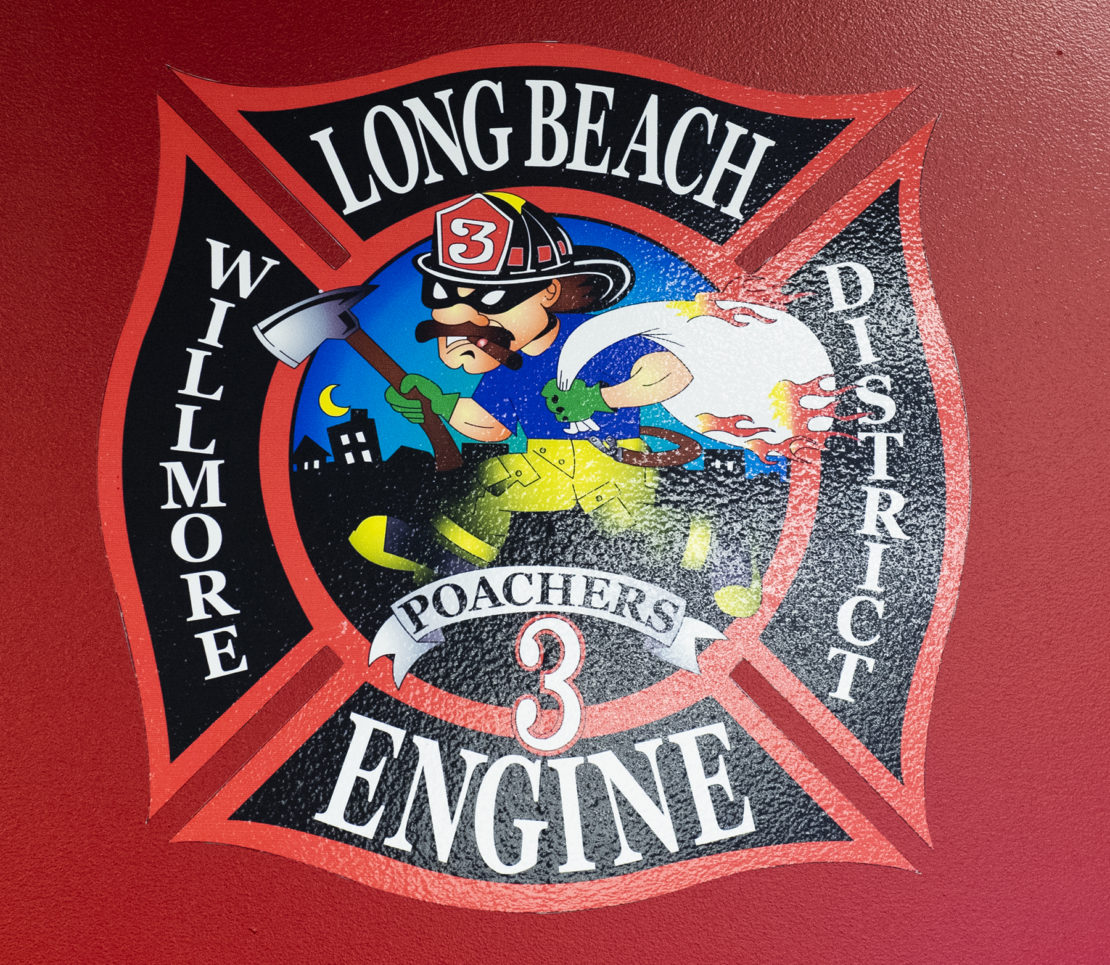 Station 3, 1222 Daisy Ave. The Poachers is the station’s nickname and logo, which depicts a masked fireman stealing a bag full of fire. Station 3’s location is ideally located for poaching fires—that is, getting to a fire first in another station’s area, says Fisk. It’s an in-your-face tactic that results in braying bragging rights, plus the beaten fire house has to buy the poachers ice cream. “I’ve seen engineers on treadmills at the station with map books looking for shorter routes around town so they can get to fires first,” said Fisk. “It’s a big point of pride.” 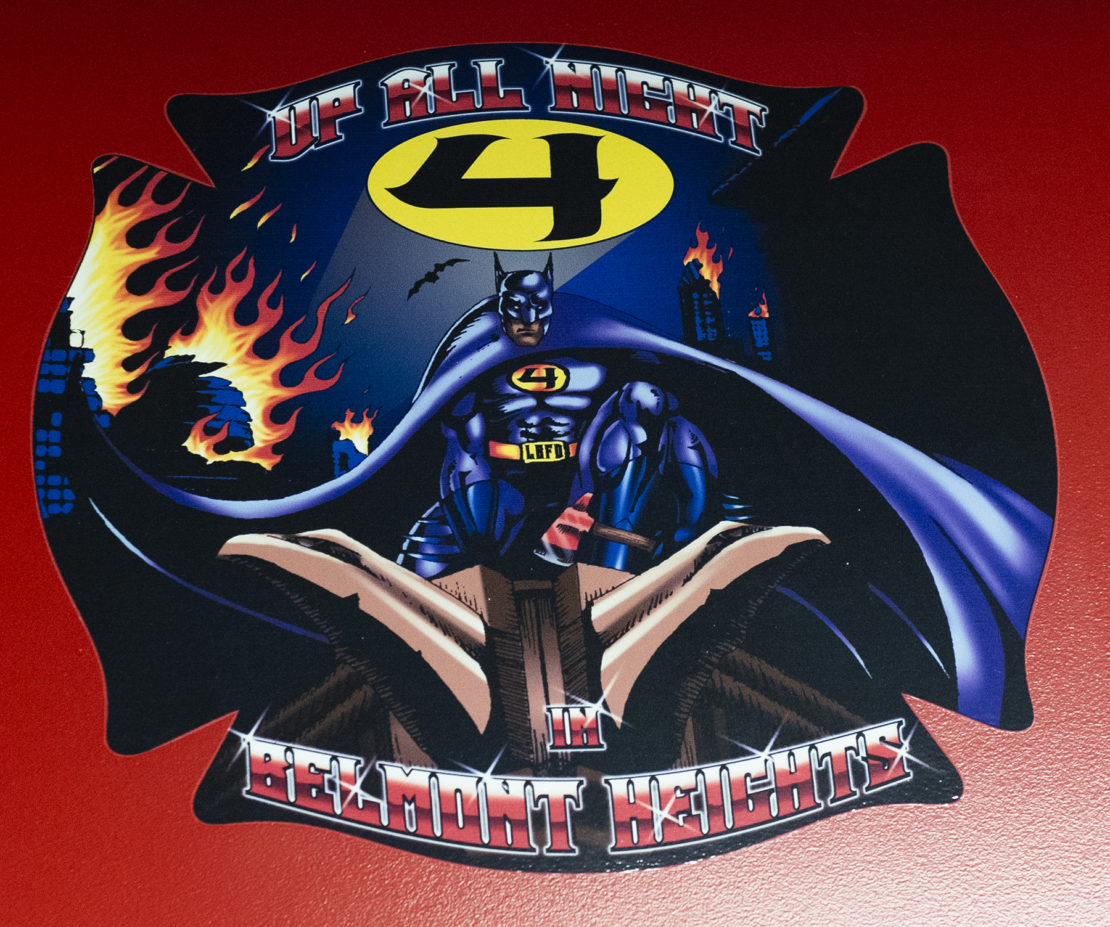 Station 4, 411 Loma Ave. This station in Belmont Heights services a community that frequently sleeps in and parties late. Its slogan is “Up all Night,” and, Dumpster diving again, the crew at 4 came up with the ever-vigilant late-night guardian Batman, cleaned it up, gave it a cape and perched it atop the firehouse. 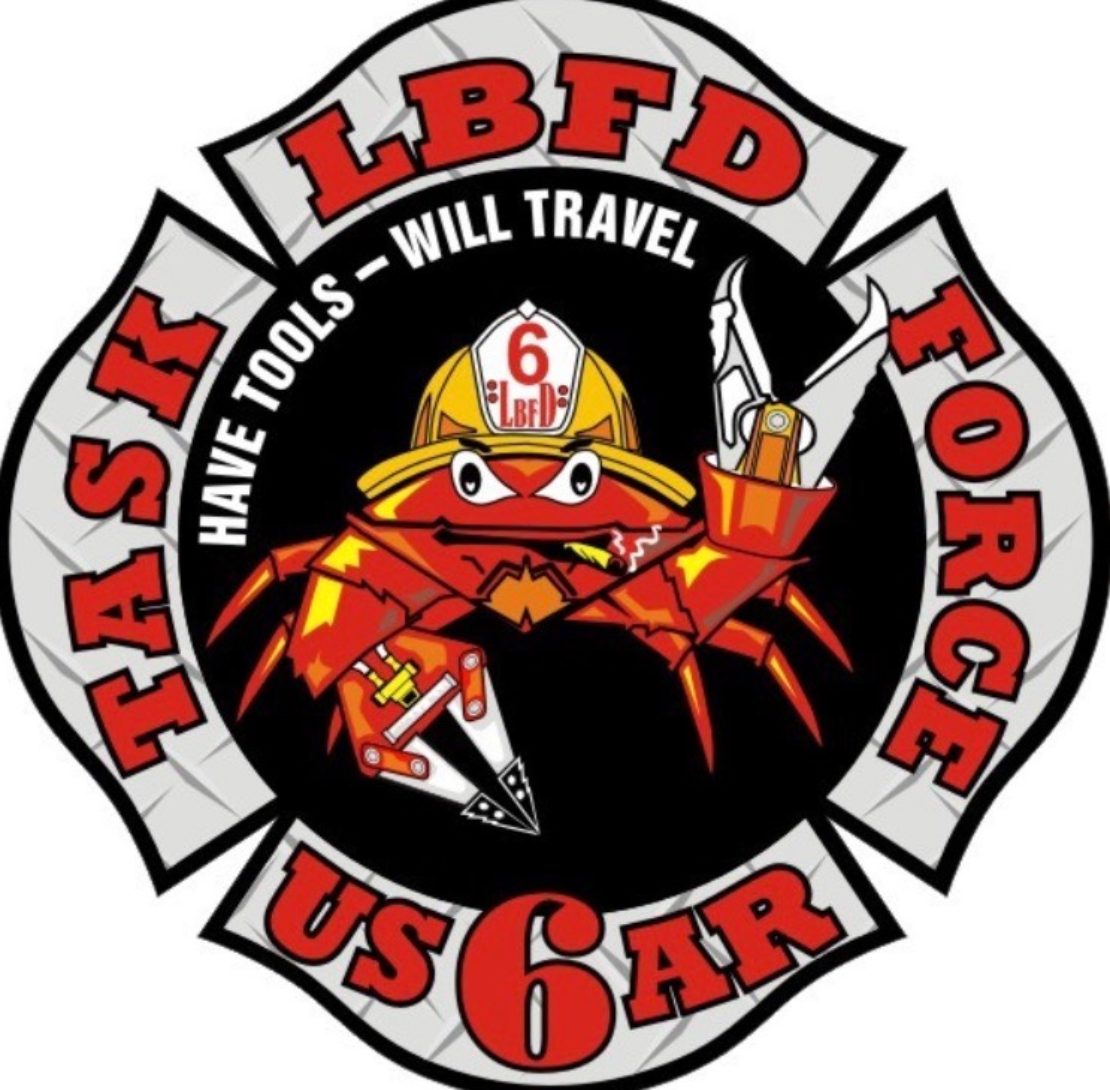 Station 6, 330 Windsor Way. This station behind the Queen Mary/Spruce is the department’s urban search and rescue and is packed with the various specialized tools required for rescue. And, because it’s located next to the water, there are a million crabs skittering on the rocks outside. So what better mascot than a crab with Hurst tools—a spreader, or Jaws of Life, and shears—for claws? 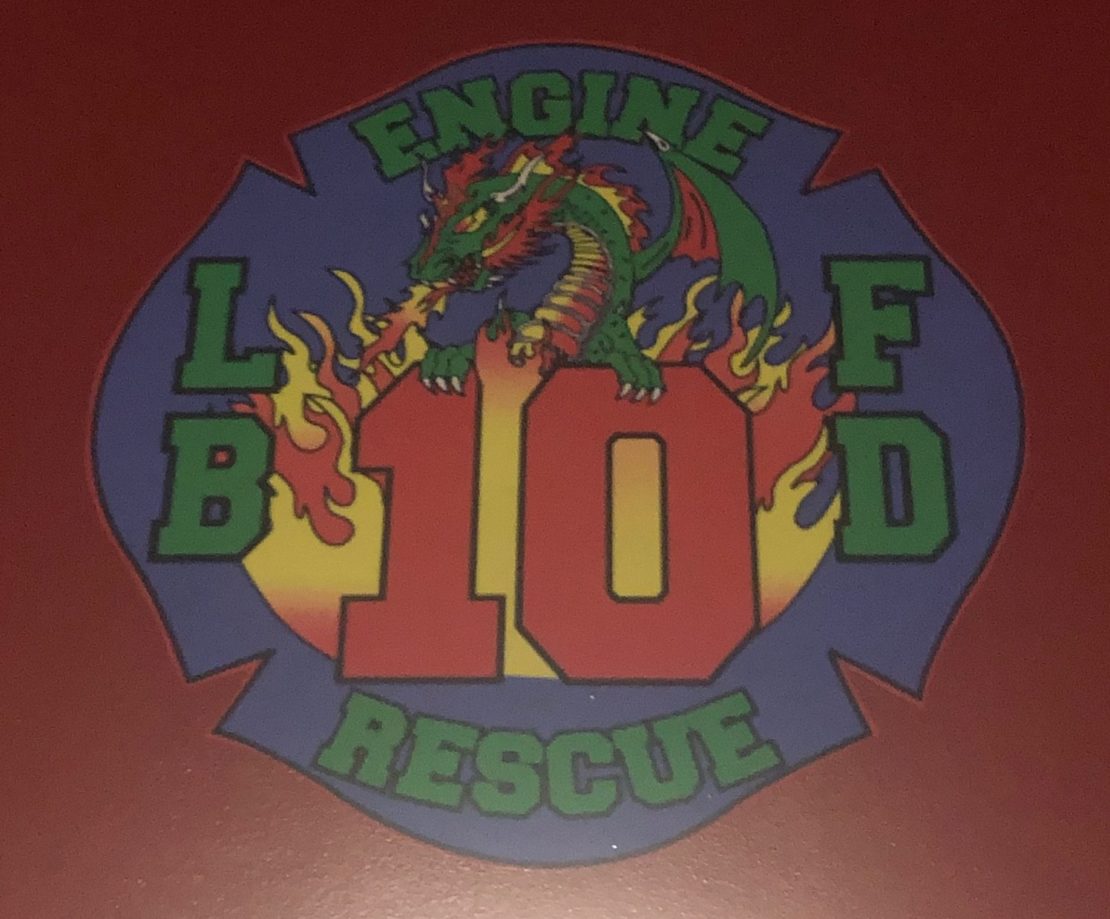 Station 10, 1417 N. Peterson Ave. This station is a popular choice for firefighters who like a lot of action, or “adrenaline junkies” as Fisk puts it. At one point a few years back it was ranked as one of the busiest firehouses in the nation. It still gets plenty of calls and for their mascot, the crew chose a dragon, a nod to its location in Cambodia Town. 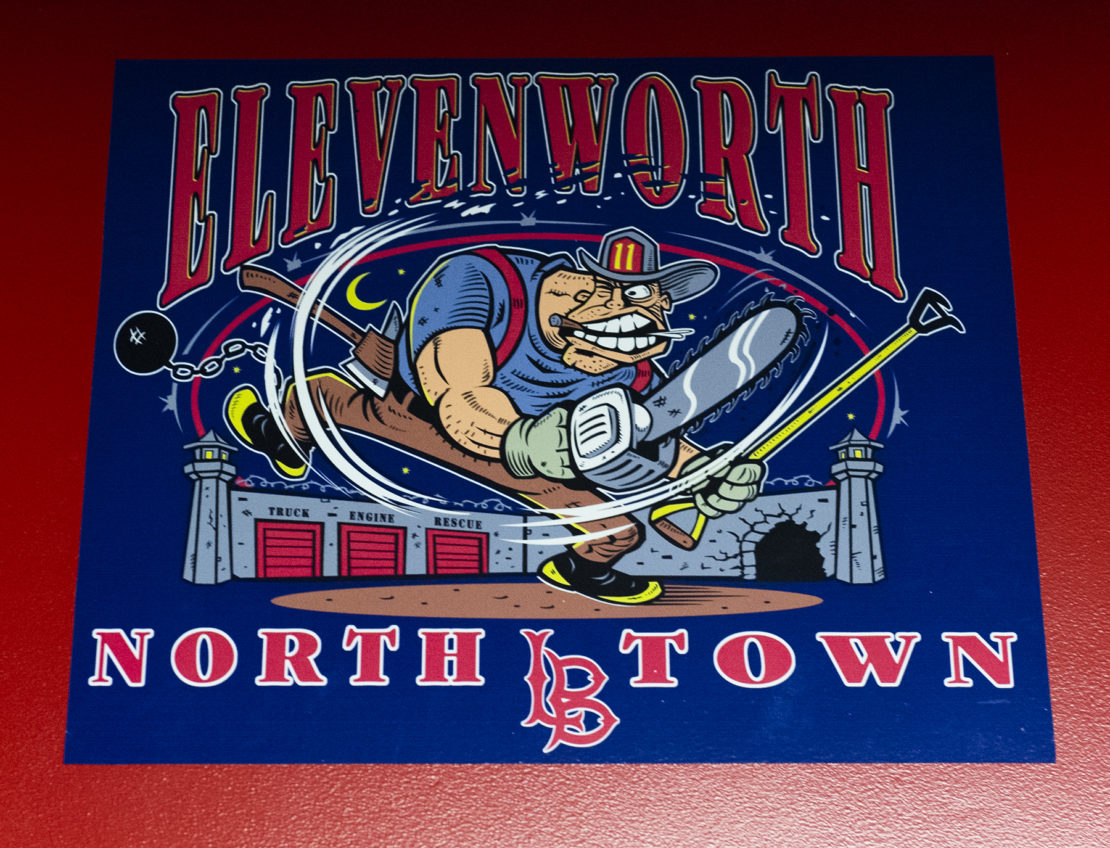 Station 11, 160 E. Market St. The crew here has a lot of Northtown pride, and the firefighters at 11’s are self-touted experts at ventilation, cutting through roofs to let the smoke out and cool the flames. The “Elevenworth” logo is a chainsaw-wielding firefighter busting out of the Graybar Hotel. Also included in the logo are three red doors. Members from 11’s visited the NYFD in the days before 9/11 and thought it was cool that the New Yorkers had painted their station’s exterior roll-up doors red. Back in LB, they decided to paint their station doors red, too, without getting authorization. The brass figured why fight it and now the roll-up doors at all the stations are red. 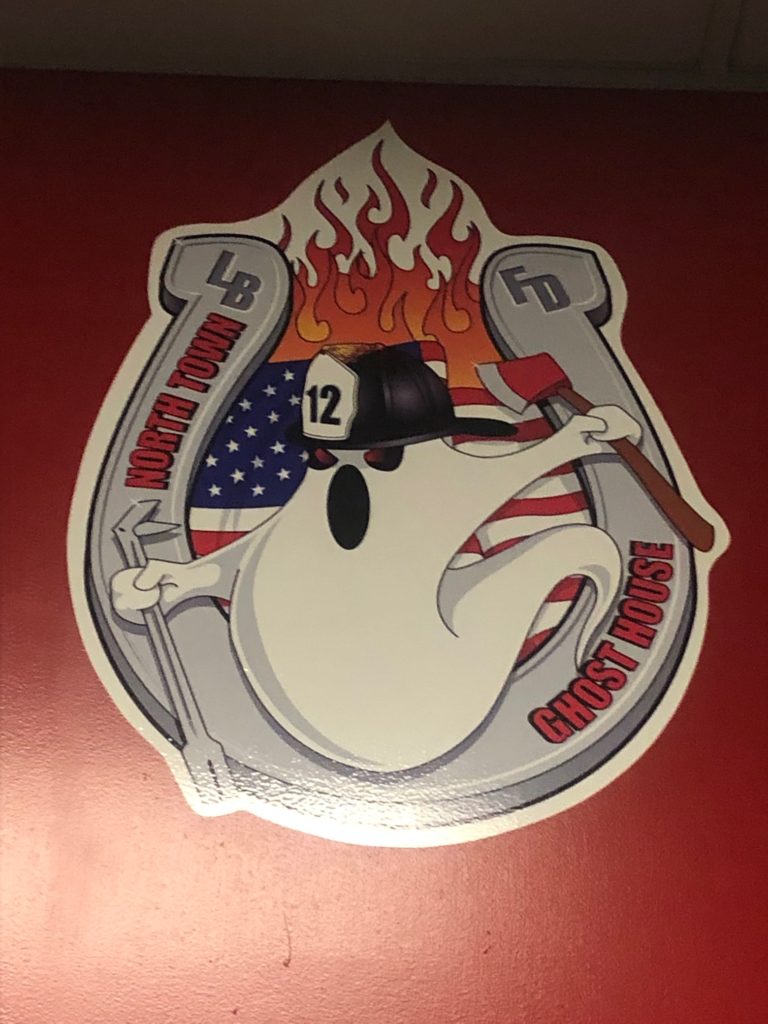 Station 12, 1199 E. Artesia Blvd. Twelve’s logo shows a ghost, even though there have been no ghosts reported there. However, the old Station 12 at 6509 Gundry Ave., now a field office for 9th District Councilman Rex Richardson, was the site of regular hauntings. The ghost of firefighter John Makemson, a firefighter known as “Smokey” who died of natural causes in 1988, has never quite left the building. Firefighters have reported numerous paranormal experiences over the years, including waking up unable to speak or move. Makemson’s  ghost lives on, as it were, as Station 12’s logo. 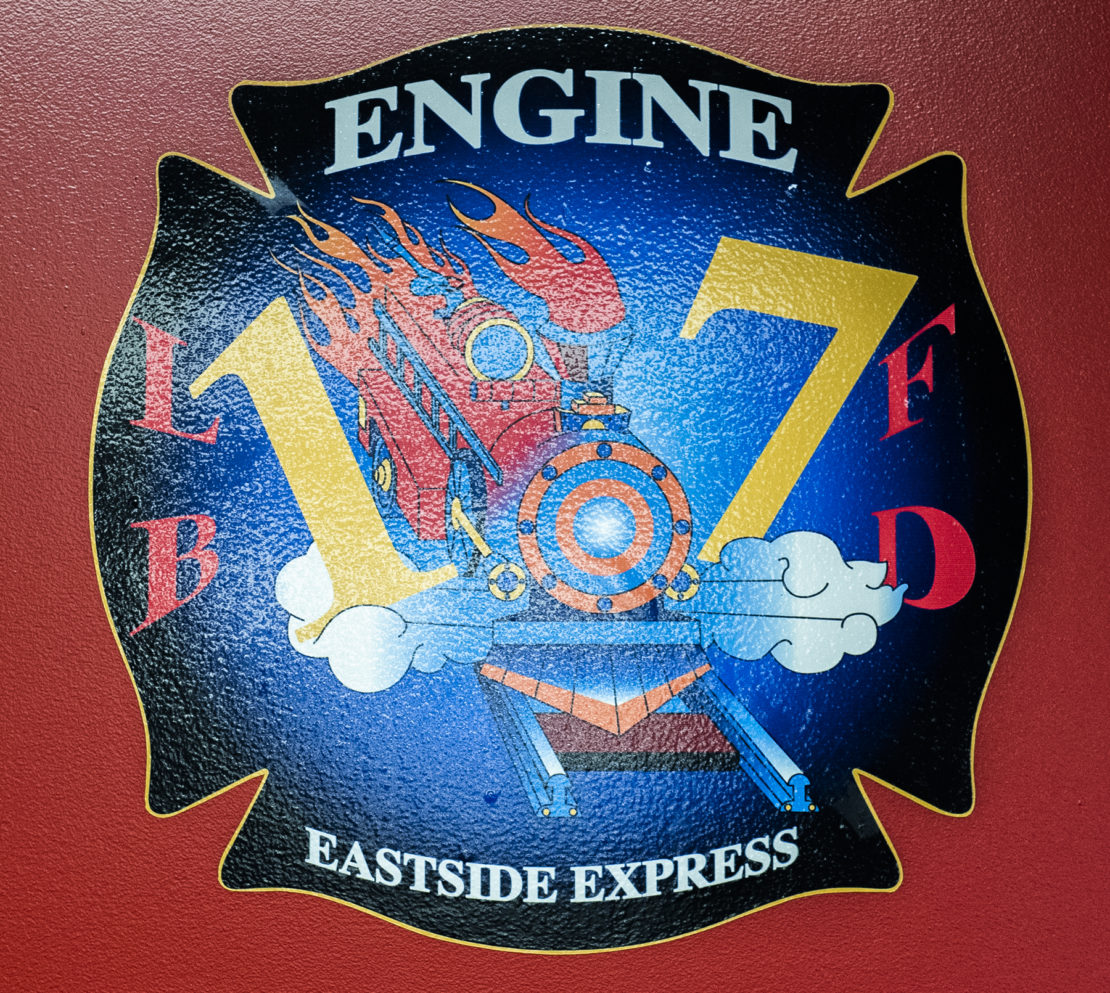 Station 17, 2247 Argonne Ave. Station 17, with its new truck bought with Measure A funds, covers the largest area in the city. “They’re just all over the place, speeding from one part of their area to another,” said Fisk. “So they’ve got a train on their shirt, the East Side Express, roaring through town.” 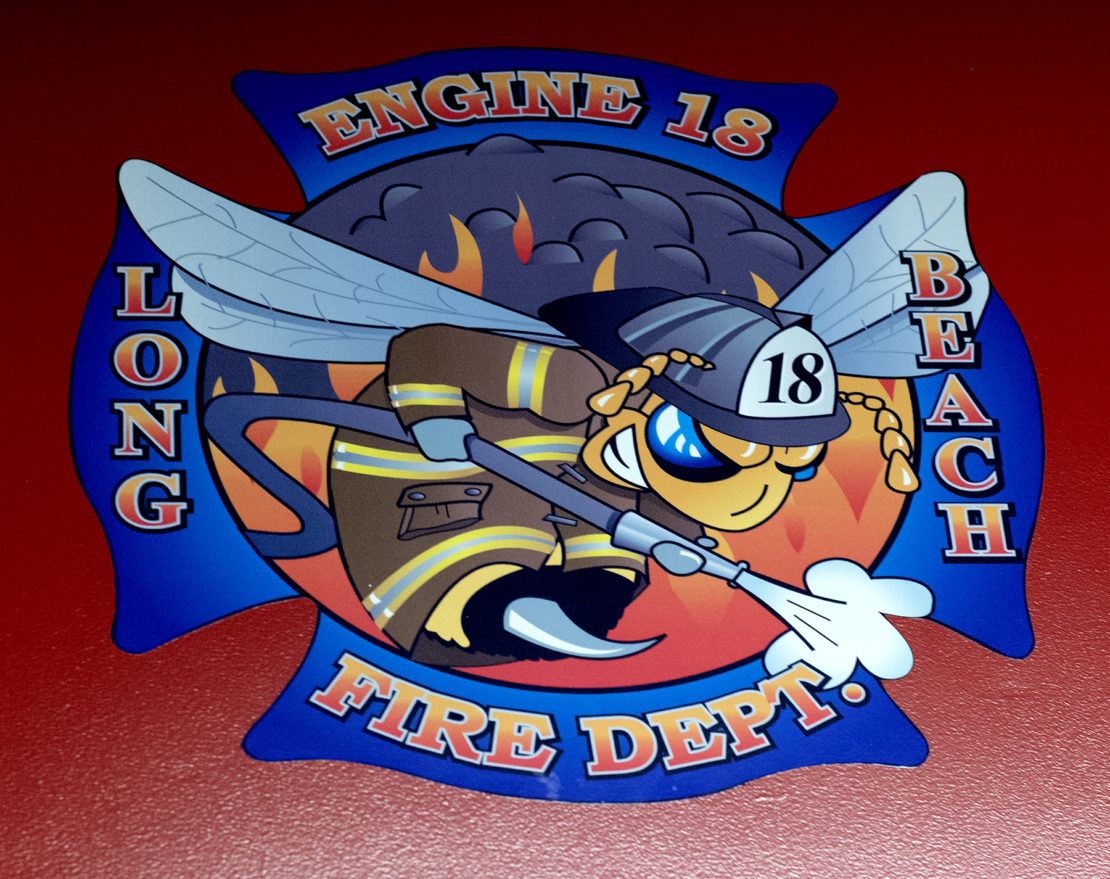 Station 18, 3361 Palo Verde Ave. Located in a neighborhood made up largely of single-family homes, the station got a ton of calls from residents reporting hives of suspected Africanized “killer” bees in the earlier part of the 2000s, before murder hornets began hogging all the limelight. “We were getting bee call after bee call,” said Fisk, who was working at 18 in those days. “They even issued us a bee suit and gloves.”

Firefighters don’t typically do hive removal, but Vector Control was often unavailable, so the crew at 18 went out on a lot of bee calls. 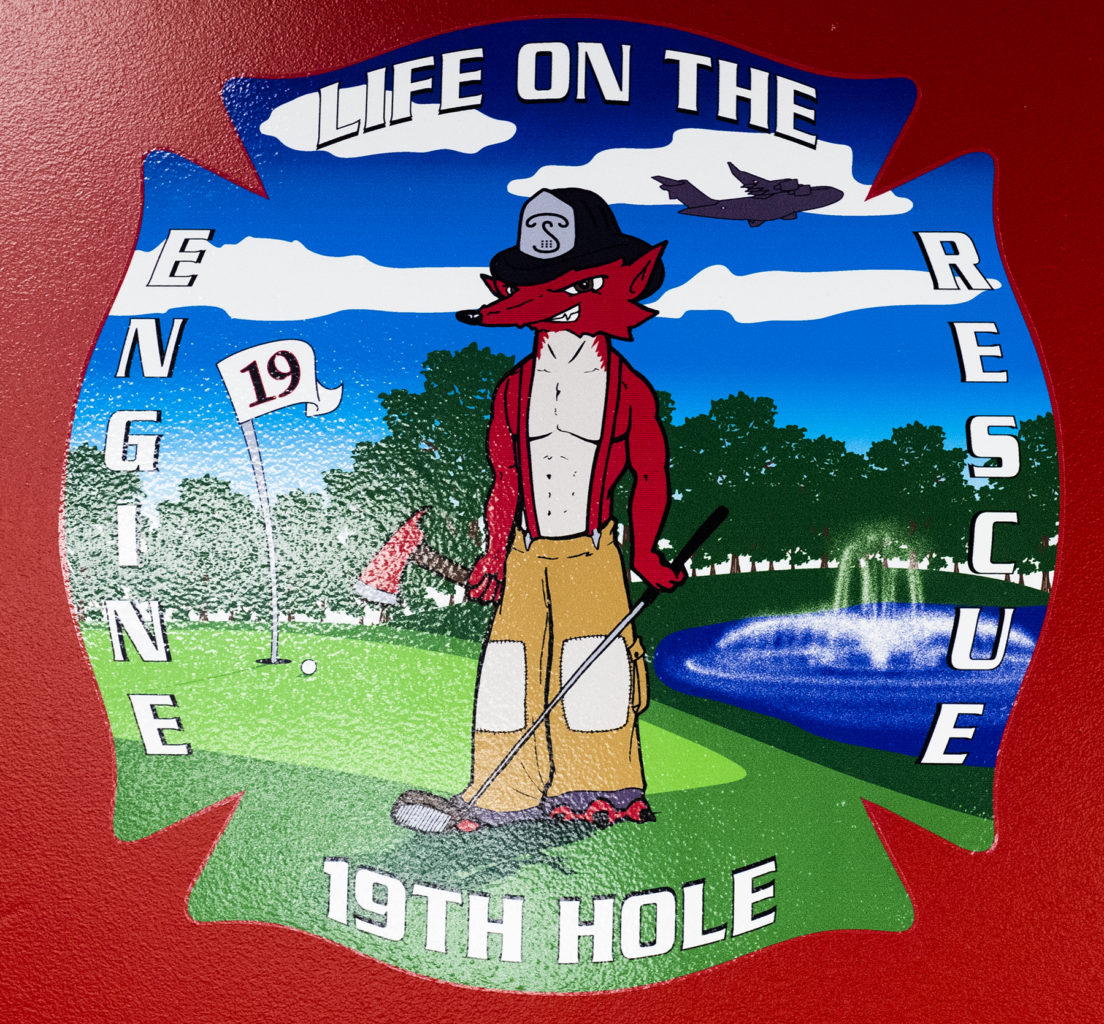 Station 19, 3559 Clark Ave. Aptly called the 19th Hole because it backs up to Skylinks Golf Course. The logo shows a fox, in honor of the foxes that once regularly patrolled the course. The fox now is nearing extinction thanks to coyotes, which have pretty much eaten all the foxes on and around the course, including those at the nearby Long Beach Airport. Station 19 is currently mulling the possibility of replacing their fox with a coyote. The logo also gives a nod to another extinct feature, with a depiction of a C-17 flying overhead. 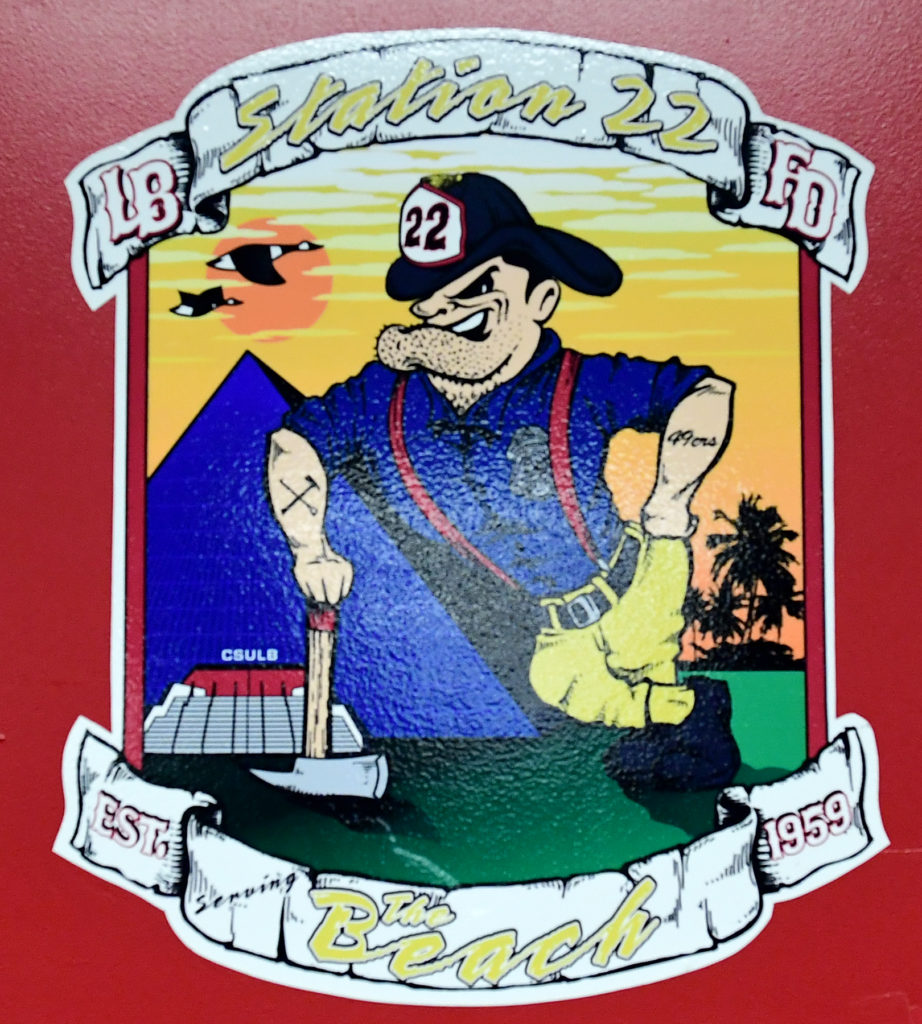 Station 22, 6340 Atherton St. Cal State Long Beach might’ve given its longtime mascot Prospector Pete the heave-ho, but he’s still alive and well in his job as a firefighter at Station 22, next door to the campus in the shadow of the Pyramid. The station is 10 years younger than the campus, which makes its mascot a ’59er, so don’t pick on him for his past. Still, out of solidarity, he sports a 49ers tat on his left arm.