The Long Beach flag still haunts and taunts me, flapping maniacally outside my window at work where I can no longer unsee it. I’ve dragged others into my vexillologistical hell.

“We have a flag?” asked our senior reporter Kelly Puente recently. I pointed it out to her and now whenever she sees it flying over Ocean Boulevard at The Promenade, she curses at me. She, like I imagine most of the residents of Long Beach, had never seen it before, and now she has nightmares about it.

The flag looks like somebody took a not particularly attractive business card to a flag maker and said, “Make one that looks like this,” and, despite the hesitancy of the flag maker, whose integrity forces him to argue with the client and try to dissuade him from such a horrible decision, he nevertheless ultimately agrees to make the hideous thing. The man’s got a family to feed and it’s not like every day somebody comes in wanting a custom flag.

I wrote about the city’s desperate need for a new flag, and it’s imperative that the city not drag its feet on this matter because millions of visitors will be in town for the 2028 Summer Games and believe me, they will turn around and bolt for the exits if they see our current flag which was, as I’ve noted earlier, stolen whole cloth from the Port of Long Beach’s flag and adopted in 1967 amid what I like to imagine were catcalls and jeers. It was obviously adopted simply because city leaders got tired of dealing with the subject.

Well, some of us aren’t tired of the subject and I asked readers to submit their designs for a new flag, and the worst one we got (and we were raised in a manner that forbids us to note which entry that was) was still at least twice as good as the current city flag.

Today, let’s look at some of the best entrants. 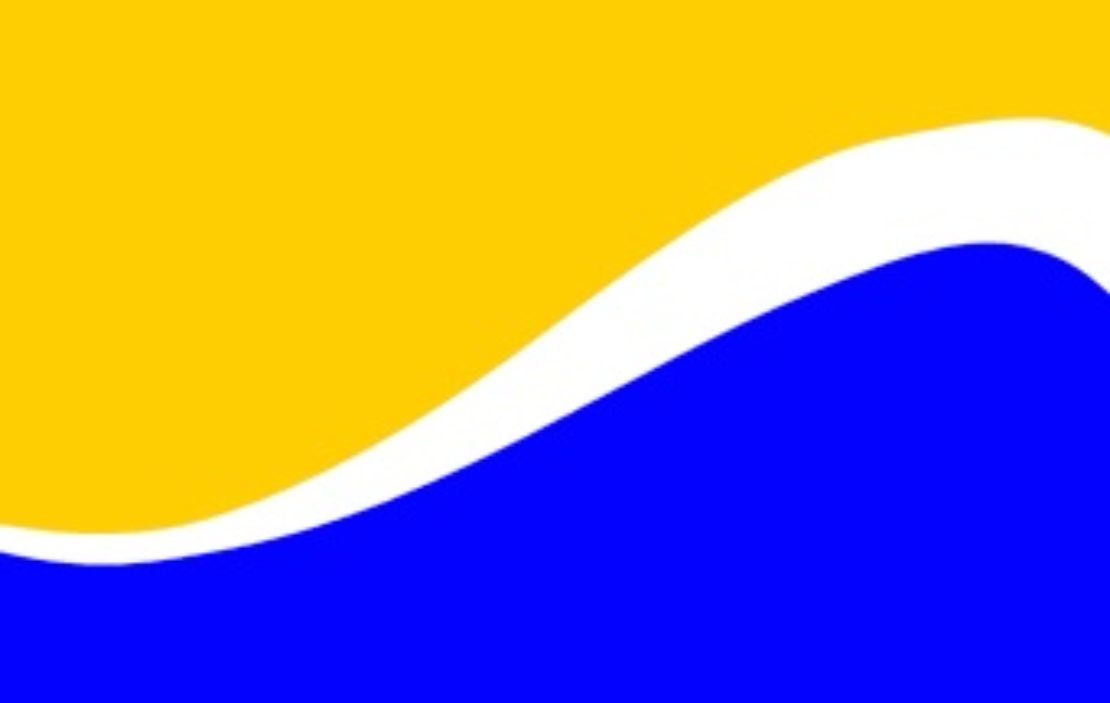 This is what the Long Beach flag would look like without all the gibberish on it. Gone is the city seal along with the outdated motto, “The International City” as well as the city name. A couple of flag designers submitted this design and it’s not a bad flag. I think we could live with it. Elias Granqvist notes, “It keeps the tradition from the old flag, so it will be easily recognized by people knowing the old flag. It is simple and striking, yet distinctive with its wavy lines.” And Mike Olds writes what I’ve been hearing all my working life: “I don’t think we need an entirely new flag, just a bit of editing.” 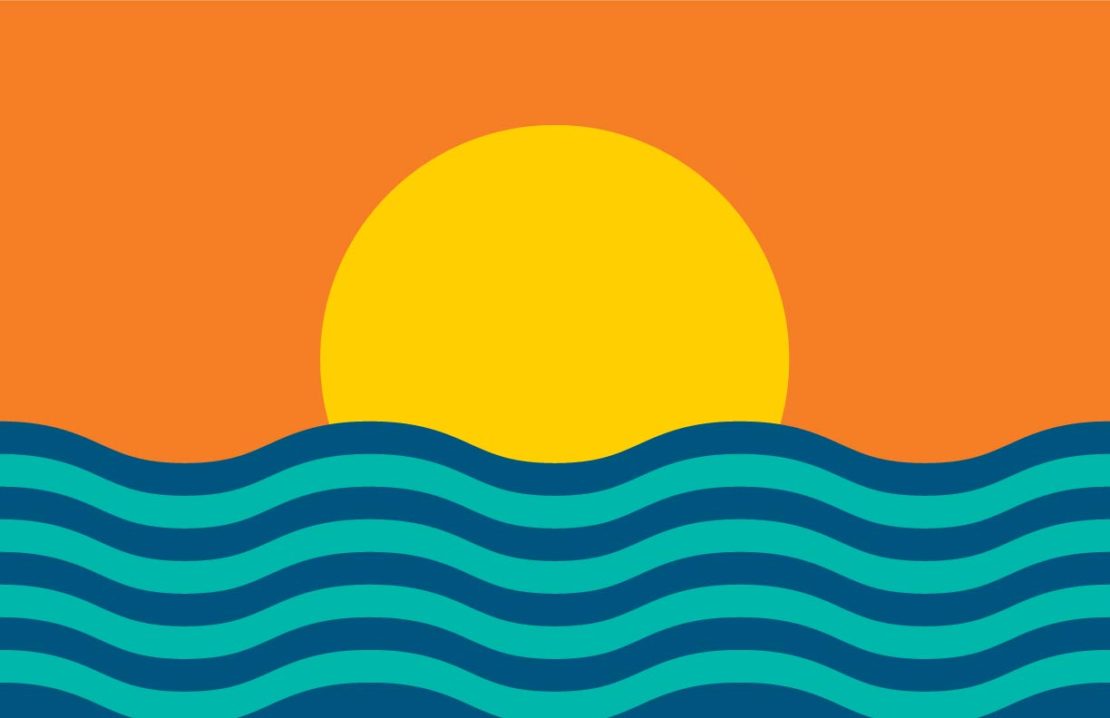 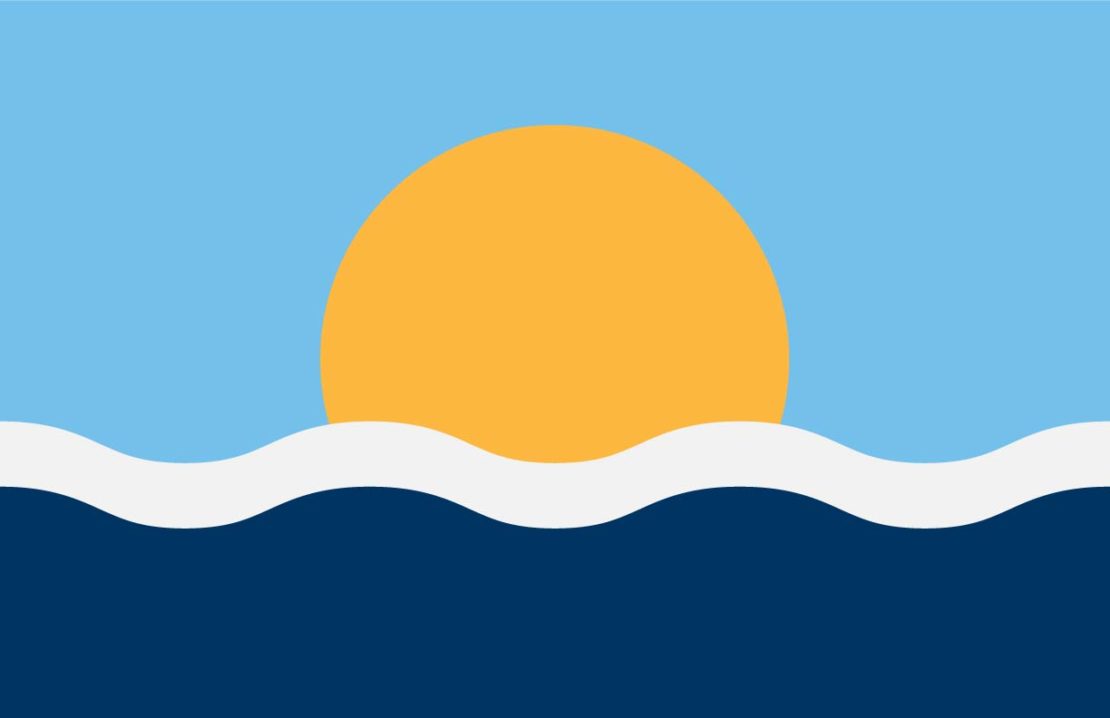 These two designs were submitted by Ericka M. Berry and they’re an idealized depiction of a view from the shore. The fact that these and many other submissions contain waves, however gentle, is a bit of poetic license, which I think is allowable. No one wants a warts-and-all flag. 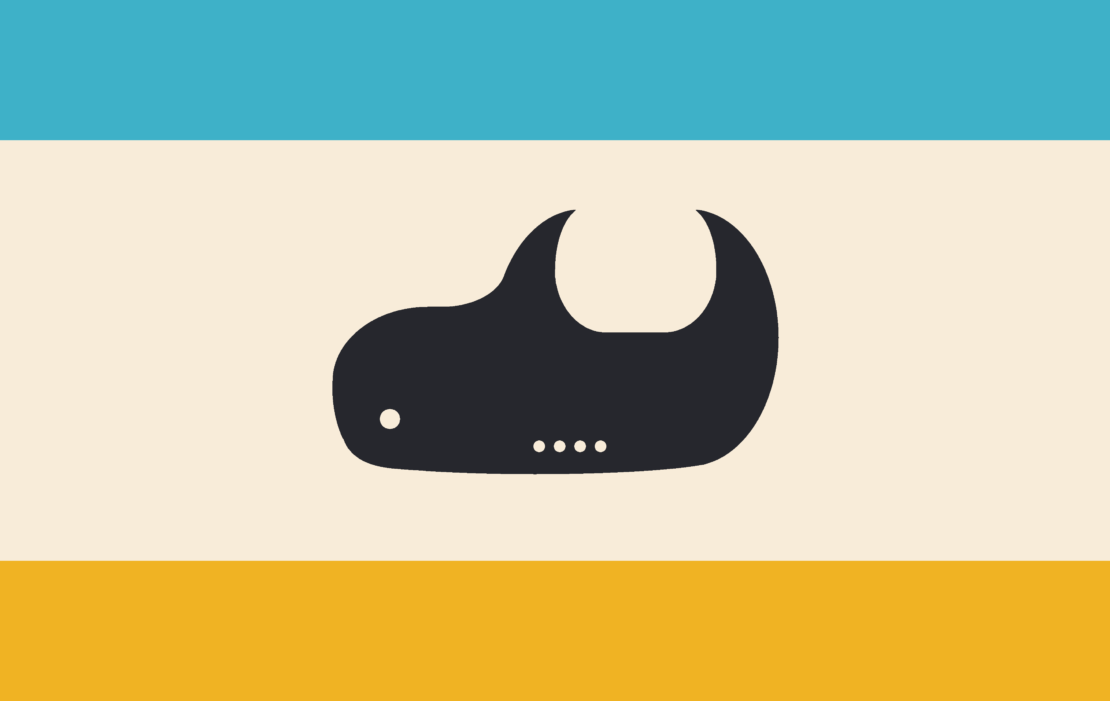 This one’s a nod to those who came to California before any of us, including Juan Rodriguez Cabrillo and his murderous crew. Designer Alasdair Gunn explains, “The flag features a stylized whale, based on a Tongva (Gabrieleño) sculpture. I have a lifelong interest in Native American languages, and as my interests have expanded to take in vexillology, I thought it would be a good opportunity to give some prominence to a part of the pre-Columbian history of California. I also hope that the whale makes for a distinctive symbol.” 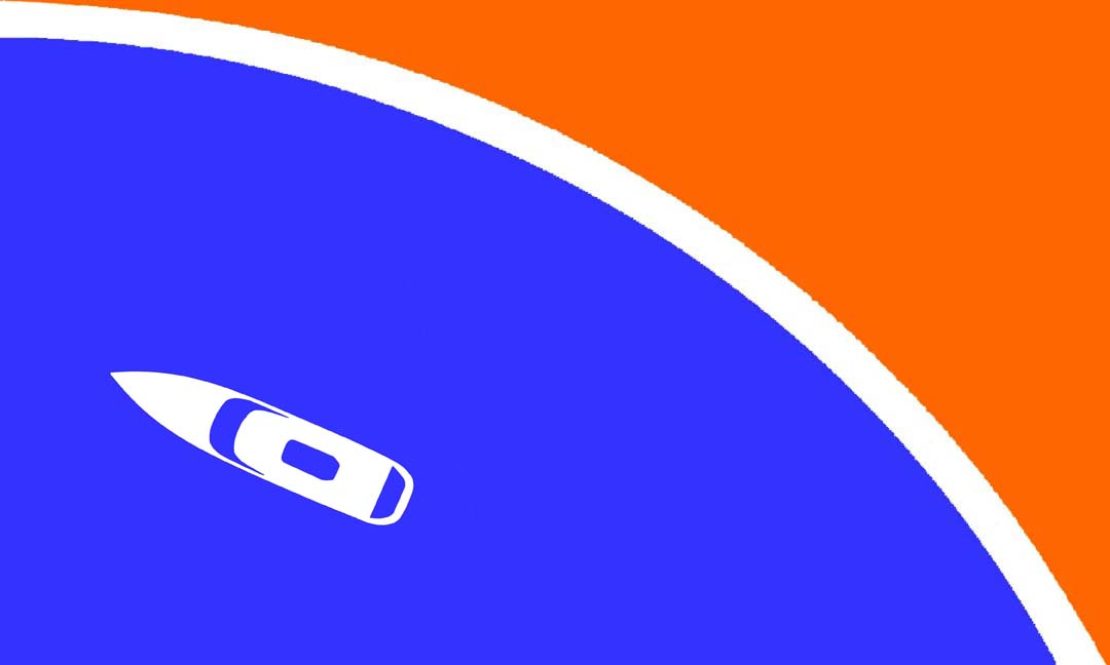 The “Long Beach needs a new flag article” got picked up by the North American Vexillological Association, so design ideas came in from all over the world, including this one from architect and designer Gary Baldwin, from Beverly Hills, Michigan. “The design is pretty easy to interpret,” he writes. “Blue for the harbor, orange for the city, and a nod to the importance of boating and shipping.” 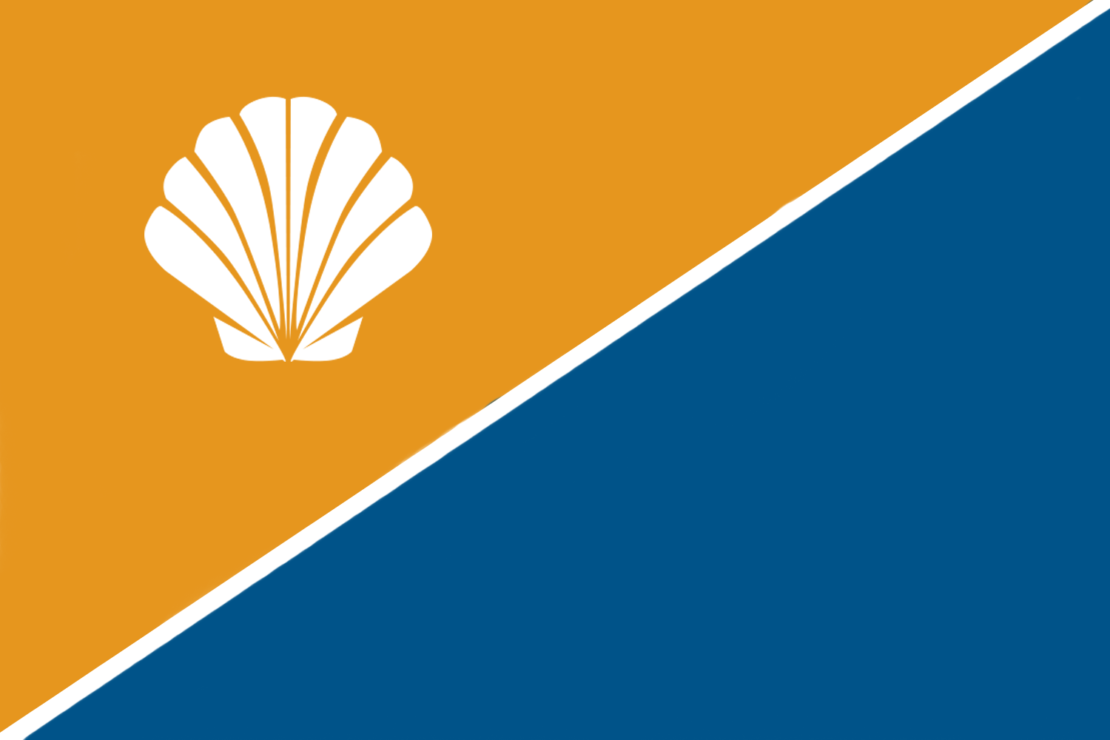 Long Beach resident Nye Warburton offered a stylized version of the current flag, dumping the language and other unnecessary salad that mucks up the old one and salvages the beach and ocean colors and the shell from the city’s seal. 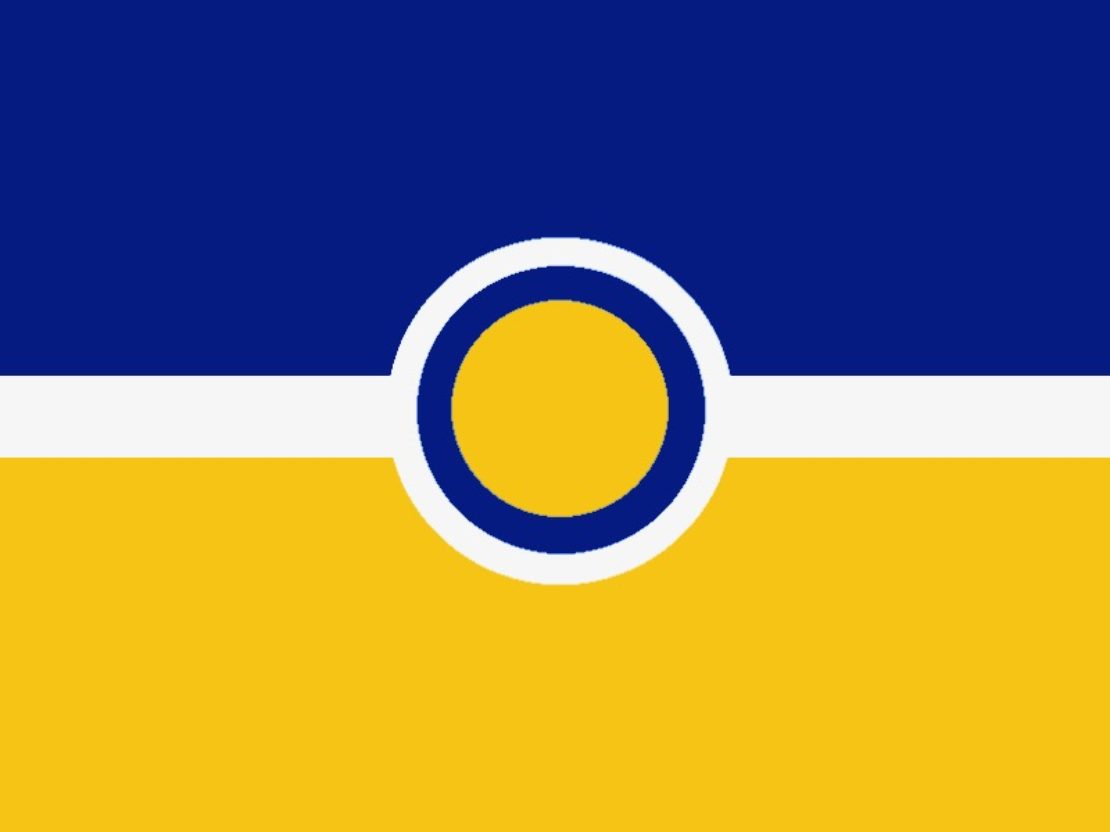 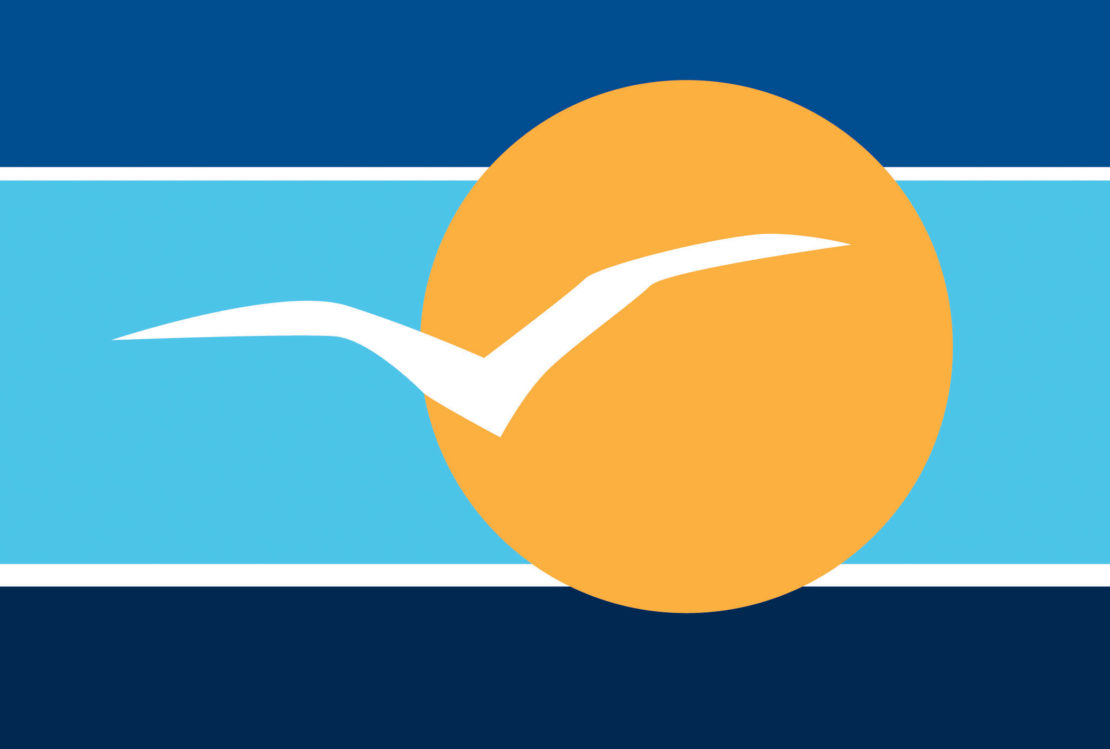 “My son Vaughn is a huge fan of flags,” writes Brian Gray, the father part of the father-son team of vexillologists. “When he was around 4 years old, he learned all the countries and flags of the world, and could draw them from memory.” Vaughn designed the top one and Brian did the bottom. “We both took inspiration from the water, sand and sky of our fair city by the sea,” writes Brian. 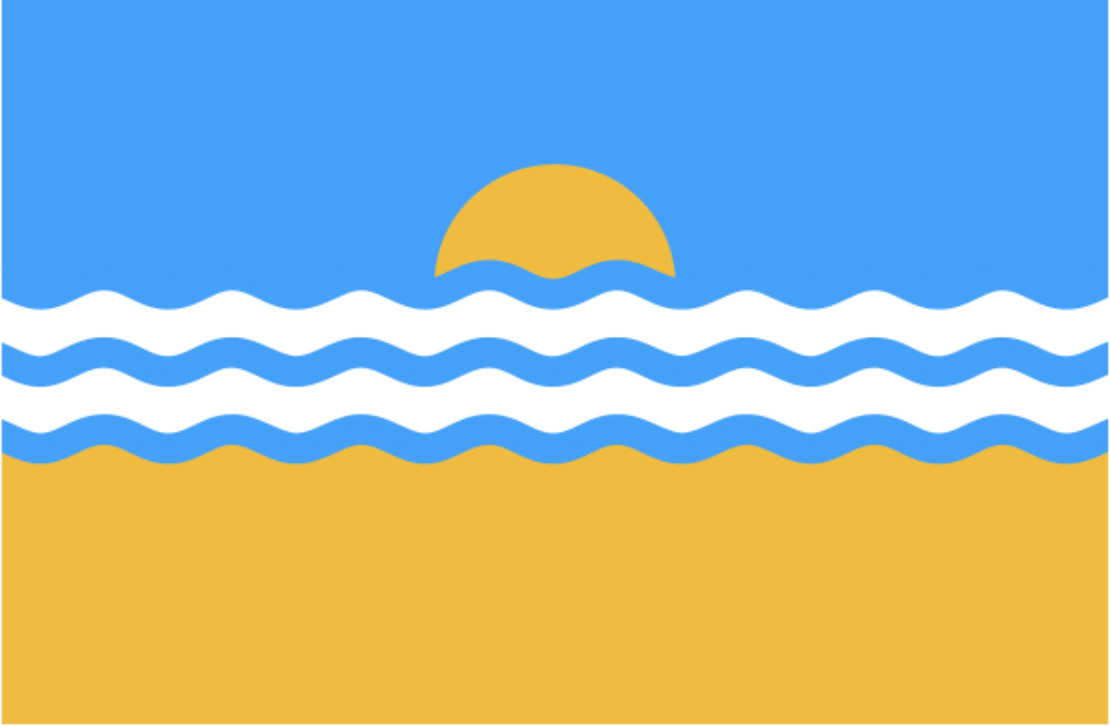 Beach, water, sun. Who needs words and seals? This offering comes from vexillologist Pirzada Junaid, and it just makes us want to grab a towel and a face covering and head to the beach. 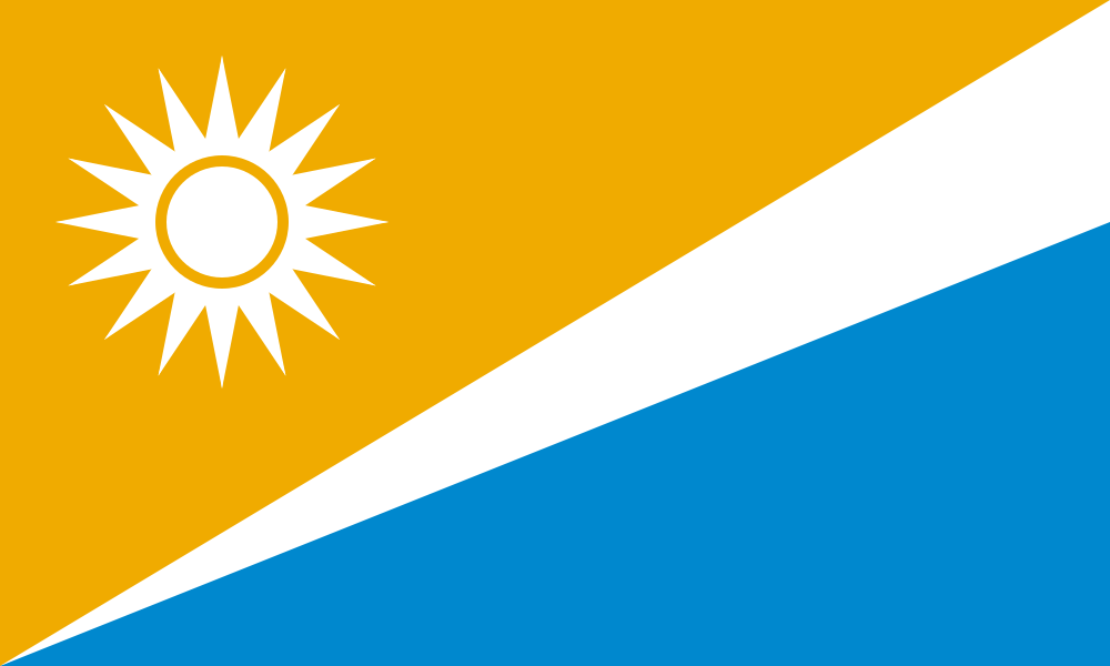 Brian Cham, a vexillologist from Auckland, New Zealand, explains his creation: “The sun in the canton (top left corner) represents the sunny climate of Long Beach and the positive energy of its people. There are 16 points to suggest a compass, which references the motto “The International City.” Long Beach is the second busiest container port in the U.S. and has links all around the world. The white section represents the lively vigor of Long Beach. It is small but grows larger, like the rays of the sun, suggesting dynamism and growth. This flag should be the official flag of Long Beach because it expresses its sunny, energetic, cosmopolitan vibe in a beautiful way that all residents will be proud to fly.” 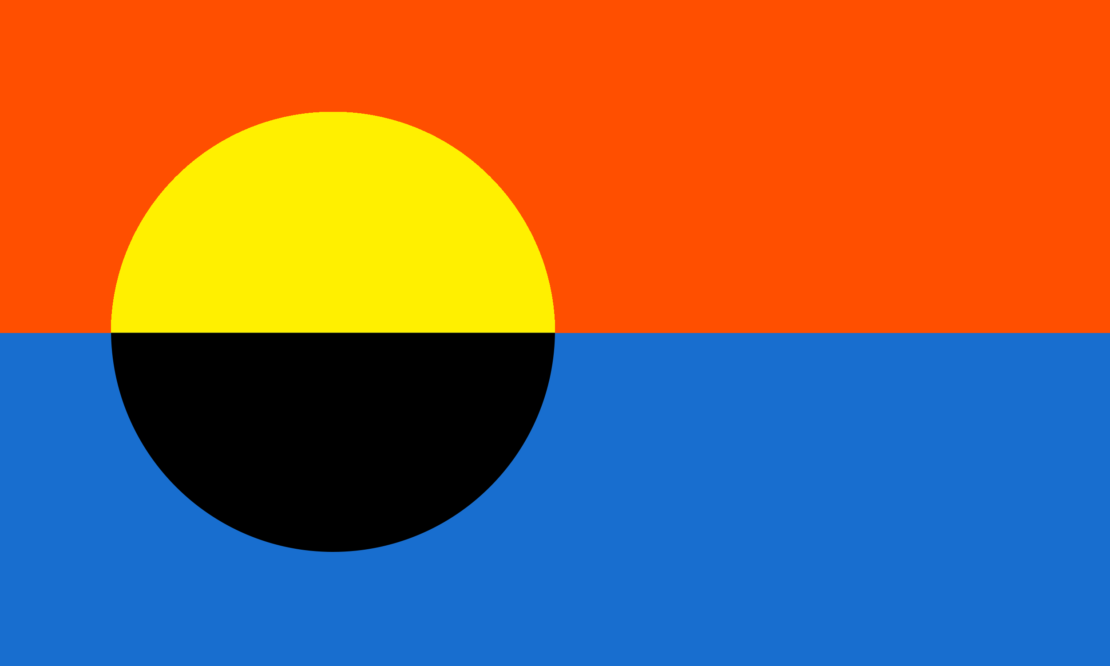 Jonah Weaver, another member of the North American Vexillological Association, describes his submission: “The upper half of the field is International Orange, representing the motto, ‘The International City.’ The lower half symbolizes the Pacific Ocean. The bottom half of the circle along the horizon represents Long Beach’s history in the oil industry. The flag as a whole is supposed to show the beautiful sunsets of the city.” 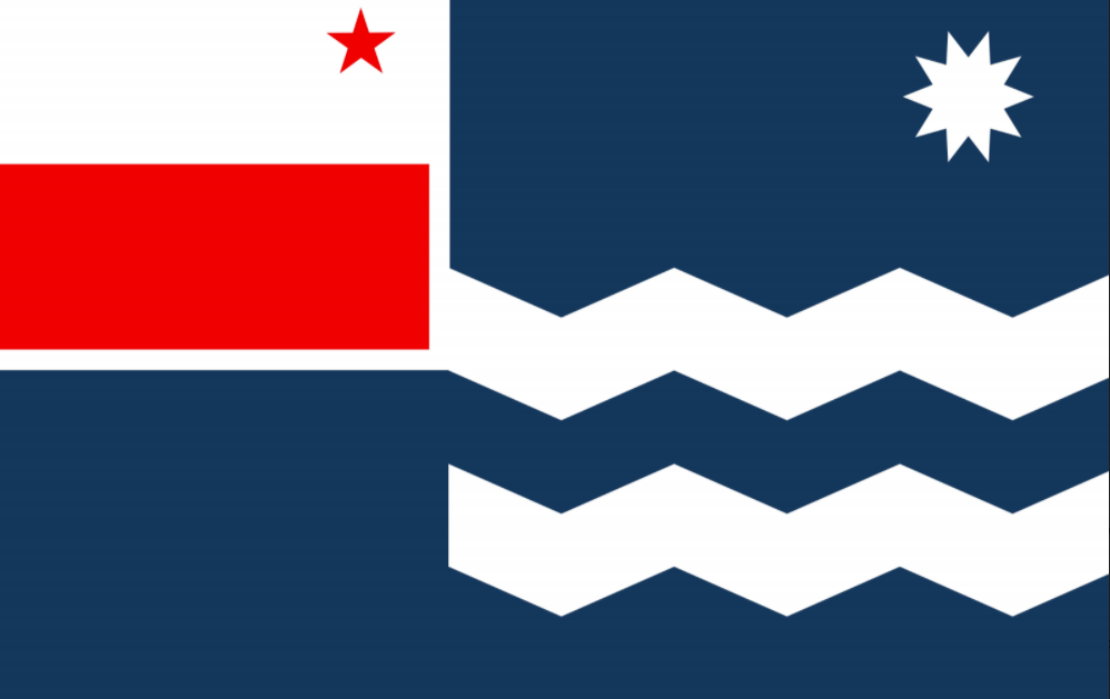 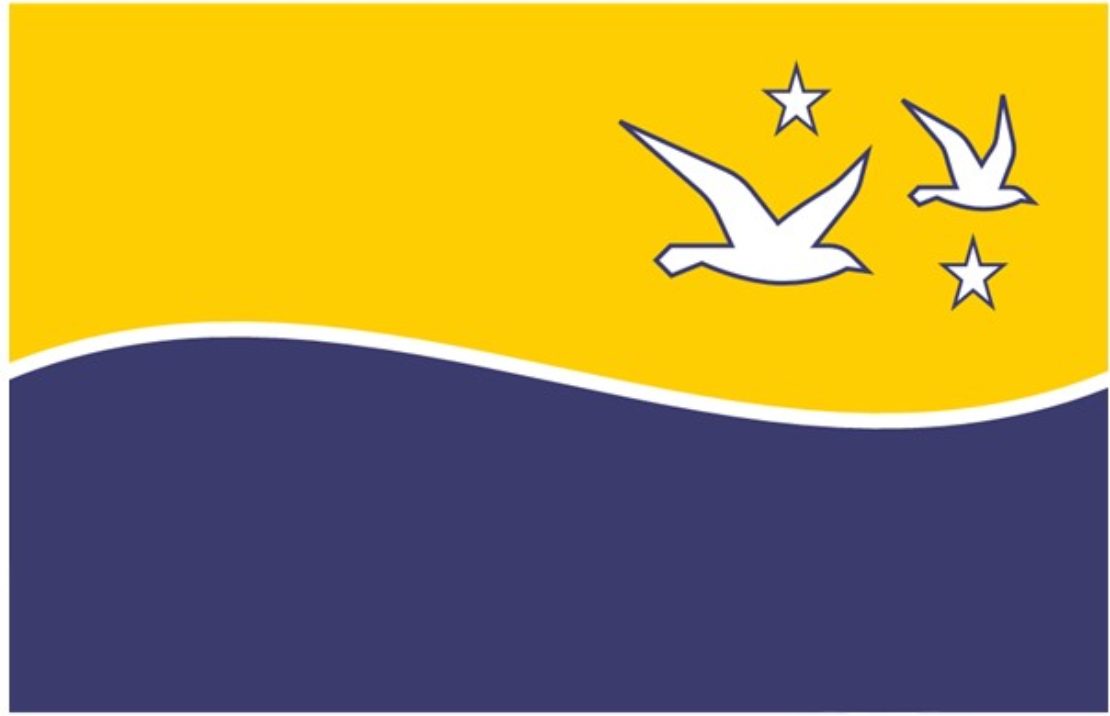 Nina Novin’s flag looks simple, but it’s rife with symbolism: The seagulls represent our aerospace history and continuing  progress in the rocket industry (they also represent seagulls), the stars are a nod to our two historic ranchos as well as our handy location between Los Angeles and Orange County. But, the designer notes, we might have to flatten the wave out a bit in a salute to our breakwater. 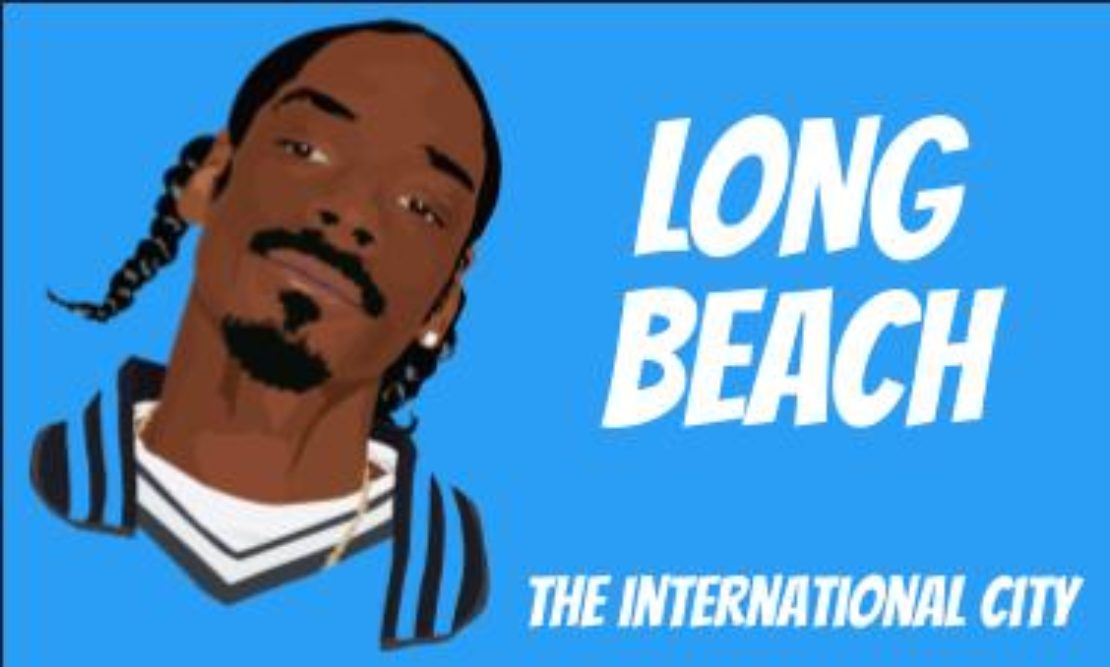 Finally, Gerhardt Popwell offers this, “a flag that will be recognized the world over.”

What’s next? Send in your thoughts and picks for your favorite design. I’ve got some some high-powered city officials on the horn right now waiting for your response.

Send your comments to me at [email protected], or drop them in the comments on the Post’s social media pages.