Girlfriend of stabbing spree suspect says he was in a mental health crisis • Long Beach Post News
- ADVERTISEMENT -
Help us light up the city; Add your home to the 2022 Holiday Lights map. CLICK HERE

The man accused of going on a stabbing spree from Anaheim Street to Alamitos Beach Monday morning had recently gone off his medication and was in the middle of a mental health crisis, according to Yessenia Partido, who said she’d been dating the suspect, Yohance Sharp, for about a year.

Partido said 21-year-old Sharp is a “normal person,” but “when he’s not on medication, he trips out.”

Sharp suffers from schizophrenia, according to Partido, who said a doctor told Sharp a few months ago that he could stop taking the medication as long as he remained stable. When Sharp started making delusional statements recently, Partido said she tried to get him back on his meds, but he refused, accusing her of trying to kill him by giving him a “manmade pill.”

Partido said she left their apartment on Lime Avenue Sunday because she began to feel unsafe once Sharp started talking about killing people. According to Partido, she came back the next afternoon with a social worker, but it was too late: On Monday, less than a block from the apartment, Sharp stabbed a woman to death outside of a homelessness housing facility at 1133 Atlantic Ave., police said.

Over the next hour and a half, Sharp is accused of stabbing and wounding three other people, including two on Alamitos Beach where police ultimately arrested him on suspicion of murder.

Police said all the attacks appear to be unprovoked and against people Sharp didn’t know.

Beyond that, Councilwoman Cindy Allen said she and other public officials have received little information from the police department.

Allen, who represents the Alamitos Beach area where Sharp was arrested after allegedly wounding two people near the bike path, said she was frustrated by a lack of communication from law enforcement.

It took hours for police to put out initial information on the stabbings, including the highly visible attacks at the beach, which happened while many residents were on morning walks or getting ready to leave for work.

“The community deserves to know there are three stabbings and there’s one happening right now,” Allen said. 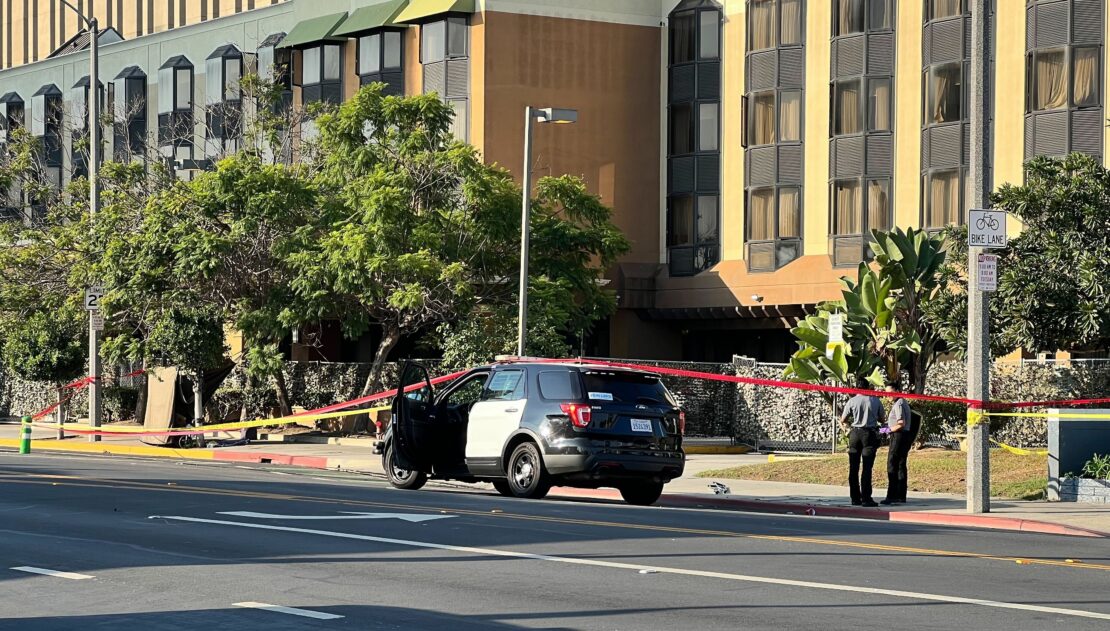 Long Beach police investigate a fatal stabbing on Atlantic Avenue on the morning of Monday, Oct. 17, 2022. Photo by Laura Anaya-Morga.

As a former police officer, Allen said she understands the desire to hold back details of an investigation to protect its integrity, but there needs to be a balance with the public’s right to know—especially when it comes to alerting people about ongoing violence.

“I’m going to ask that they reexamine these policies and how we protect the community quickly and not hours later, because that doesn’t help,” she said.

Monday was not the first time Sharp has been accused of attacking someone with a knife.

According to police records obtained by the Long Beach Post, Sharp instigated a fight at a Hawthorne park in July 2020.

When the fight broke up after a couple of blows, the records show, Sharp returned with a knife and chased the victim through some picnic tables before someone called for help and police arrived to arrest him.

Sharp pleaded no contest to assault likely to cause great bodily injury before being sentenced to 292 days in jail and two years of probation, court records show.

After Long Beach police arrested Sharp Monday, the department said he appeared to be homeless, but Partido said that was not true. The two had been living in the Lime Avenue apartment for several months, she said, but now she’s living in a motel trying to get back into her home.

When she returned home Monday afternoon—still unaware of the stabbings—she and the social worker were going to try to talk with Sharp, but she said a neighbor had taken over the apartment and refused to let them in.

The same neighbor, she alleged, had been manipulating Sharp: telling grandiose stories about how the neighbor claimed he’d died on the operating table and then been revived after a serious injury.

The neighbor, Partido said, would then order Sharp around, telling him to fetch weed or cigarettes and stop listening to Partido.

“My boyfriend would listen to him because he thought he was God,” she said.

Partido said she’s not trying to justify what her boyfriend is accused of doing, but she wants people to know he was ill.

Now Partido says she is waiting for help from police to get her back into the apartment. Detectives were in the process of interviewing her Tuesday afternoon, according to LBPD spokesperson Allison Gallagher.