Black residents make up about 11% of Long Beach’s population, but they account for 36% of police citations for minor infractions like jaywalking, smoking in a park and riding a bike at night without a light.

Those are among the findings in a study released Wednesday from the Lawyers’ Committee for Civil Rights of the San Francisco Bay Area, which analyzed non-traffic infraction data from California’s 15 largest law enforcement agencies between July 2018 and December 2019.

“Black, Latinx, homeless and disabled Californians are constantly targeted, surveilled and fined hundreds of dollars by police everyday behaviors like sleeping, owning a dog, or simply existing in public,” Tifanei Ressl-Moyer, an organization fellow said in a statement. “For some, failure to pay or appear in court may even lead to an arrest. For others, these encounters with police can be dangerous and, in some cases, deadly.” 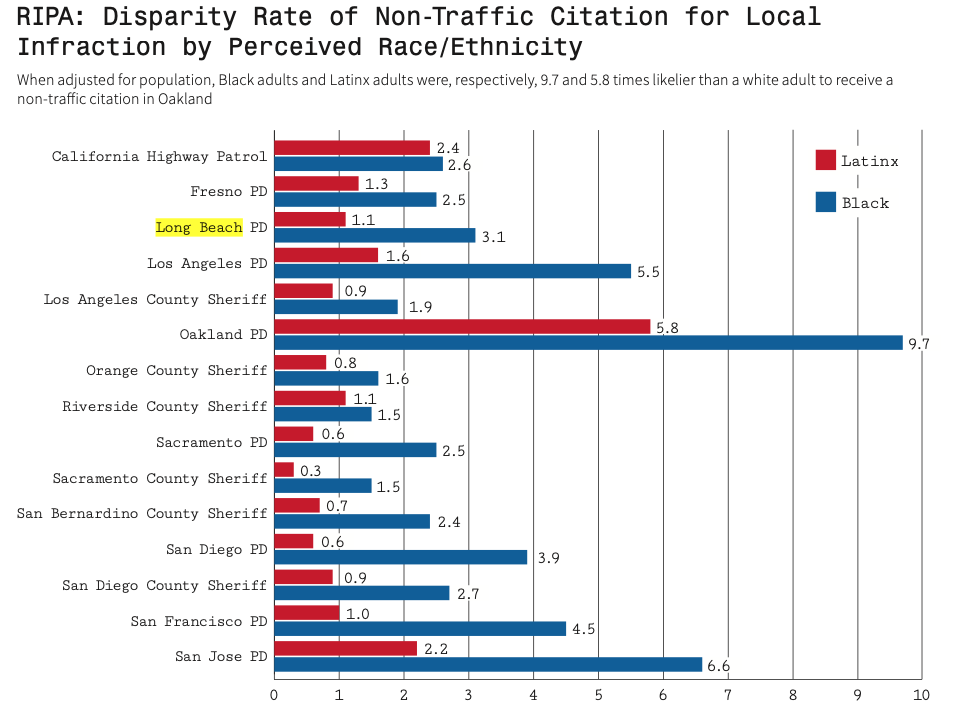 Among the findings, Black adults accounted for 63% of all citations for loitering from the Los Angeles Police Department, while Black residents in San Diego were four times more likely to receive non-traffic infractions compared to white residents.

In Long Beach, Black adults accounted for 36% of all citations for “Walking on Roadway,” or jaywalking, which was the city’s most common citation, the study found. Black residents were also significantly more likely to be cited for infractions while riding a bike. In the largest disparity, 62% of citations for “bike traveling with vehicles” went to Black people. 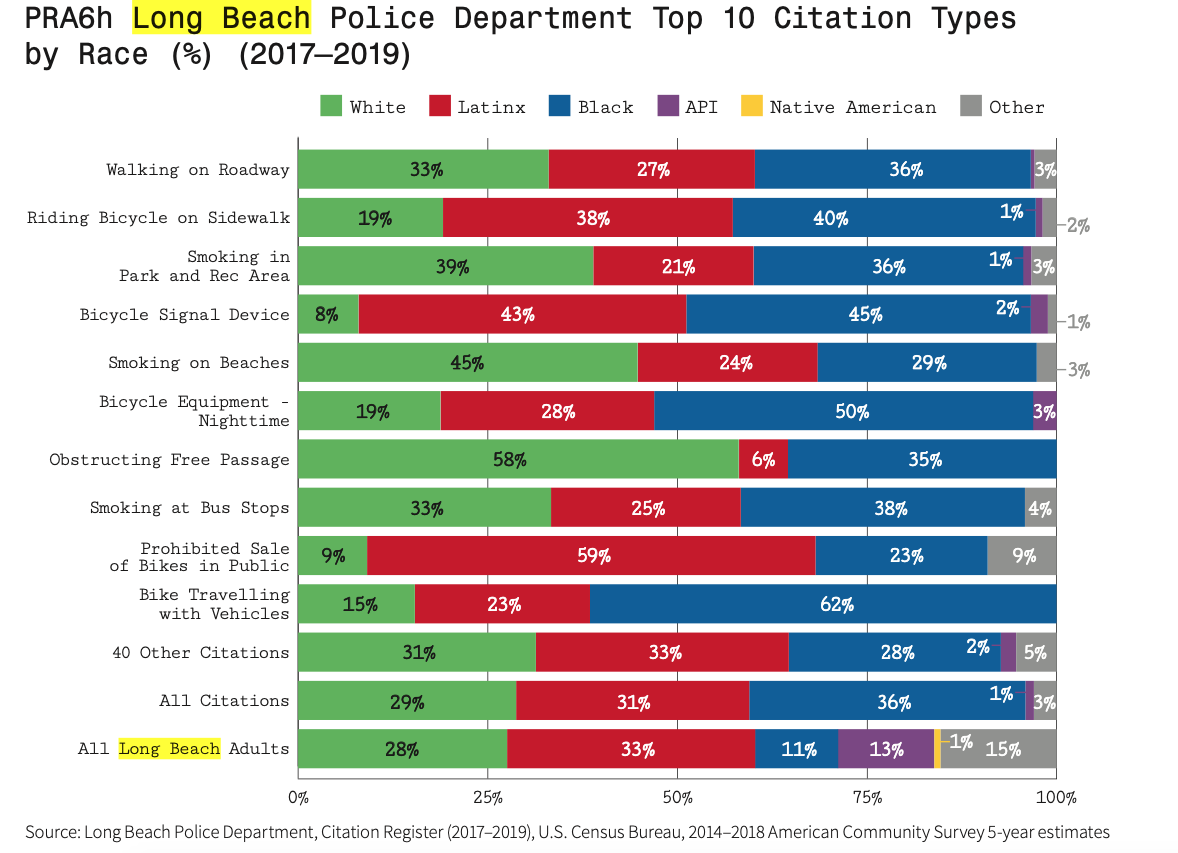 The Downtown area saw the largest concentration of citations. 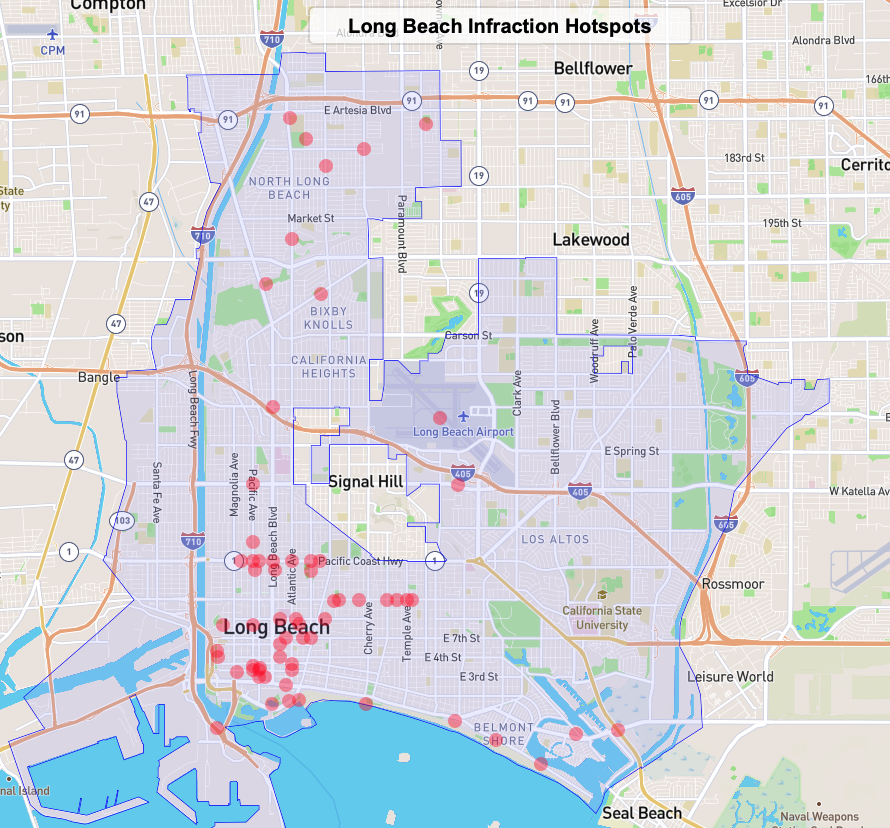 Using the RIPA data, a Post analysis in June found that Long Beach police stop a disproportionate number of Black drivers and subject them to greater scrutiny than their White and Latino counterparts.

The Post also found that Black transit riders in the city were disproportionately stopped on suspicion of fare evasion last year.

The Long Beach Police Department in a statement said it is reviewing the data and that its command staff is committed to “examining our crime impact and deployment strategies to balance the responsiveness of criminal activity and ensuring our communities of color do not feel like they are being profiled by the police.”

The data is being considered as part Long Beach’s Framework for Reconciliation, which focuses on increasing racial equity.

“The Police Department, along with the City of Long Beach, understands the need to evaluate the manner in which we currently police to ensure that our practices are reflective of the values of our organization,” the department said in a statement. “We are committed to becoming more diverse throughout our ranks and ensure that our training methods meet the 21st Century Policing model. Above all, we need to ensure that we serve all people with ethics and respect and provide service that is equitable and constitutional.”