The Port of Long Beach might have to spend $354 million over the next five years and could be forced to cut back on capital projects if it agrees to take over operations of the Queen Mary and the surrounding land, known as Pier H, according to an analysis of its 2023 fiscal year budget.

Long Beach’s Board of Harbor Commissioners, which oversees the Port of Long Beach, reviewed the estimated Queen Mary and Pier H costs and the potential impact on the port’s bottom line in a budget meeting on Monday. The port is expected to approve its 2023 budget later this month, but for now, the Queen Mary costs are just an estimate and not included.

Overall, the port estimated that Pier H and the Queen Mary could bring in at least $38 million in operating revenue over the next five years, but that wouldn’t come close to offsetting the $392 million in costs. The possible costs include $236 million in capital expenditures and ship repairs and $146 million for operating expenses.

The port could absorb the massive costs for Pier H, but that would limit future capital projects, said Sam Joumblat, the port’s managing director of finance and administration, told harbor commissioners.

And in the event of an economic downtown, the port could be forced to limit current capital projects such as its $870 million Pier B railyard, he said. 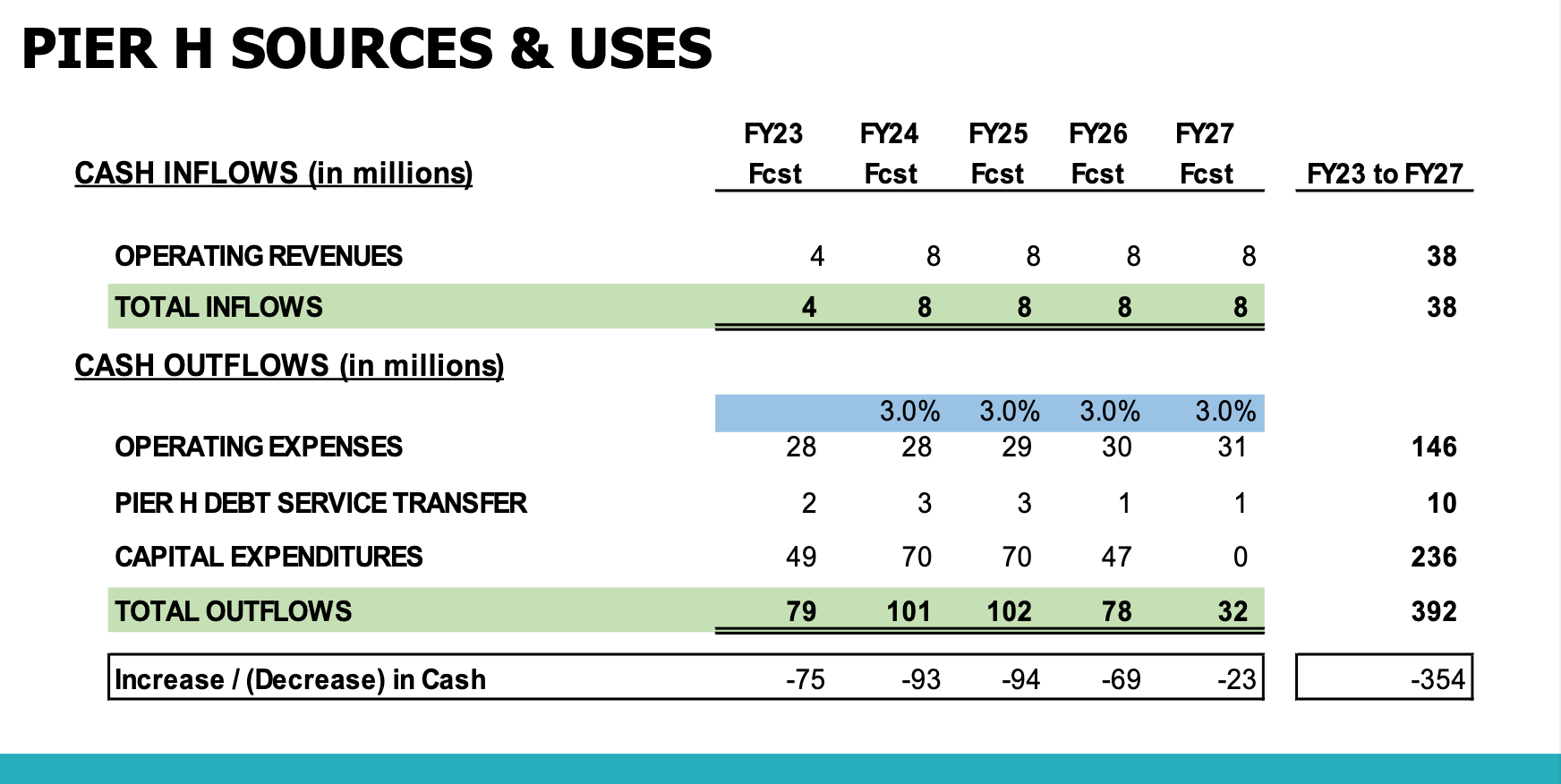 The aging Queen Mary ocean liner has been a major headache for the city of Long Beach as it grapples with how to pay for millions in repair costs, compounded by years of neglect and deferred maintenance.

A marine survey in 2016 found that the Queen Mary would need up to $289 million in repairs to be viable the next five to 10 years. But at the start of 2022, few of the recommended structural issues have been fixed and their cost would likely be higher because of the ship’s continuing deterioration.

The ship currently remains closed as the city works on $5 million in critical repair projects. In February, the city removed 20 of the ship’s corroded lifeboats, which were considered safety hazard. The ship is expected to reopen by the end of the year.

Meanwhile, the city, which has owned the Queen Mary since its arrival in 1967, is considering transferring control of the ship to the port. City officials have said the port, with its experience in waterfront capital projects, would be better equipped to handle and pay for repairs for the ship and realize the city’s longtime dream of developing Pier H into an entertainment destination.

Officials are hopeful Pier H could generate enough revenue to pay for ship repairs, but that prospect is likely years away.

“Not to be on the negative side of this, but I’m hoping that our City Council really understands that we have to be careful with what we get ourselves involved with and how do we financially make this work,” said commissioner and former city councilman Frank Colonna.

Colonna said the port, which is part of the city but has its own budget, would need significant financial support from the city if it were to take on the Queen Mary repairs.

“We can’t magically create new money to deal with what hasn’t been dealt with in the past,” he said.

Commissioner Sharon Weissman said she would like more information on how the Carnival Cruise terminal could be developed and expanded to contribute more revenue.

Revenue has also been up as the port continues to see record cargo movement. For the 2022 fiscal year, the port’s project revenue increased from $413.9 million to $455.7 million.

Port officials stressed that the costs for the Queen Mary are estimates and could be higher or lower after further analysis.

Speaking to harbor commissioners on Monday, Thomas Jelenić, vice president of the Pacific Merchant Shipping Association, said transferring control of the Queen Mary to the port would create a major drain on financial resources.

“Following the Queen Mary’s 50-year track record of failure as an attraction and hotel, the Long Beach Harbor Department analysis should be enough for the city to come to the conclusion that it is time to scrap the Queen Mary and allocate resources where they can provide public benefit,” Jelenić said. “The transfer of the queen to the port while it maybe be a political convenience is not a responsible business decision.”