A crowd of tenant advocates protested in front of City Hall Saturday to demand the Long Beach City Council remove an exemption in the city’s tenant-protection policy they say is being abused.

The policy allows landlords to evict tenants from their property if the landlord is going to “substantially remodel” the unit. Tenant advocates say that so-called loophole is being exploited for evictions.

The City Council passed a local version of a statewide tenant protection act in January last year. In February, the council added an emergency ordinance to that policy to address evictions being issued for substantial remodeling. Tenants argued that the repairs were small-scale upgrades to the residences, such as wall repainting, and didn’t merit permanent evictions.

The emergency ordinance now required landlords to obtain government building permits proving that renovations are more than cosmetic and to notify tenants with a 60-day notice that they would be remodeling the apartment.

At the time, that addition seemed like a victory for Long Beach renters, but Norberto Lopez, a longtime tenant advocate and project director for Long Beach Residents Empowered, said that since the emergency ordinance was added they have seen an increase in landlords pulling substantial-remodeling permits and evicting tenants.

His advocacy group has had to help residents from 11 buildings throughout the city dispute evictions, Lopez said.

During Saturday’s protest, advocates called on the City Council to revisit the original law and add an amendment that states “substantial remodeling” should not be grounds for eviction.

Residents from apartments in Downtown, Central and North Long Beach gave testimonies alleging that their landlords were harassing them with plans to repair the units to ultimately evict them.

“It is not a just reason to evict us,” Belen De La Rosa said in Spanish. “We have paid the rent month after month.”

Lopez said pushing out tenants to remodel a unit and then increasing the monthly rent of the unit is driving out longtime residents who cannot afford the high rent.

For now, there are eviction moratoriums in place as a result of the pandemic. However, Lopez and the other advocates are afraid once the moratoriums end in the summer that tenants will no longer have that protection.

“Long Beach has a chance to get it right,” Lopez said. “We’re losing our affordable housing stock for new tenants who can pay double what was previously paid.” 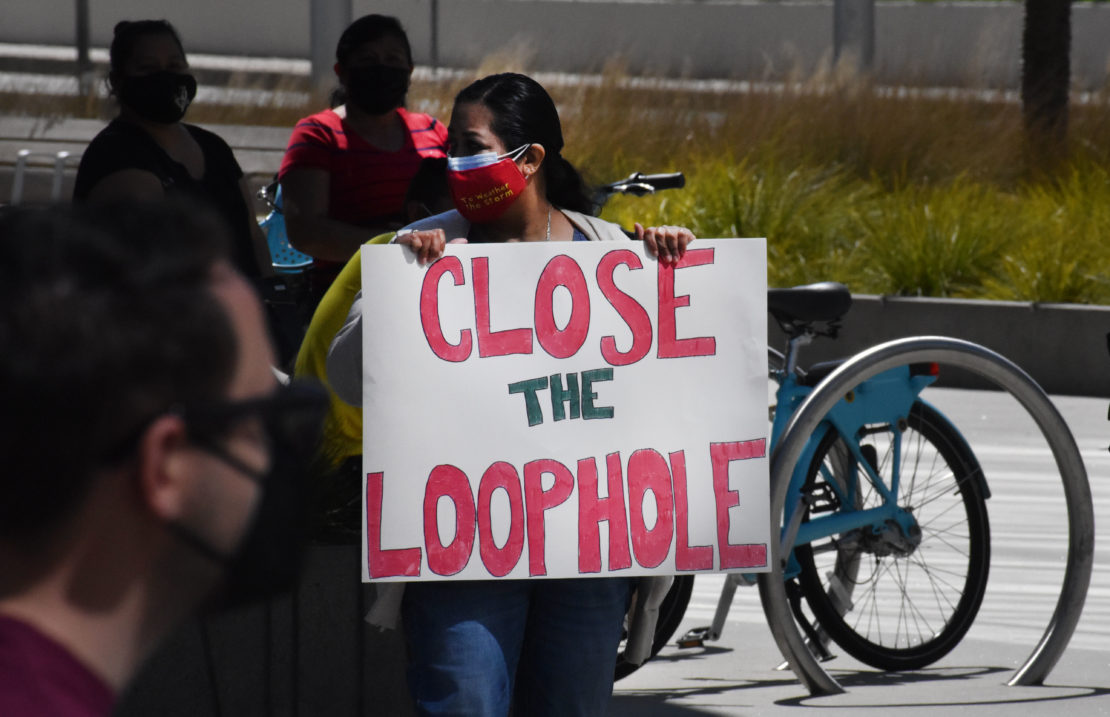 Maribel Miréles, a Long Beach tenant, holds a sign during a rally at City Hall in Downtown Long Beach on Saturday, March 27, 2021. Photo by Sebastian Echeverry. 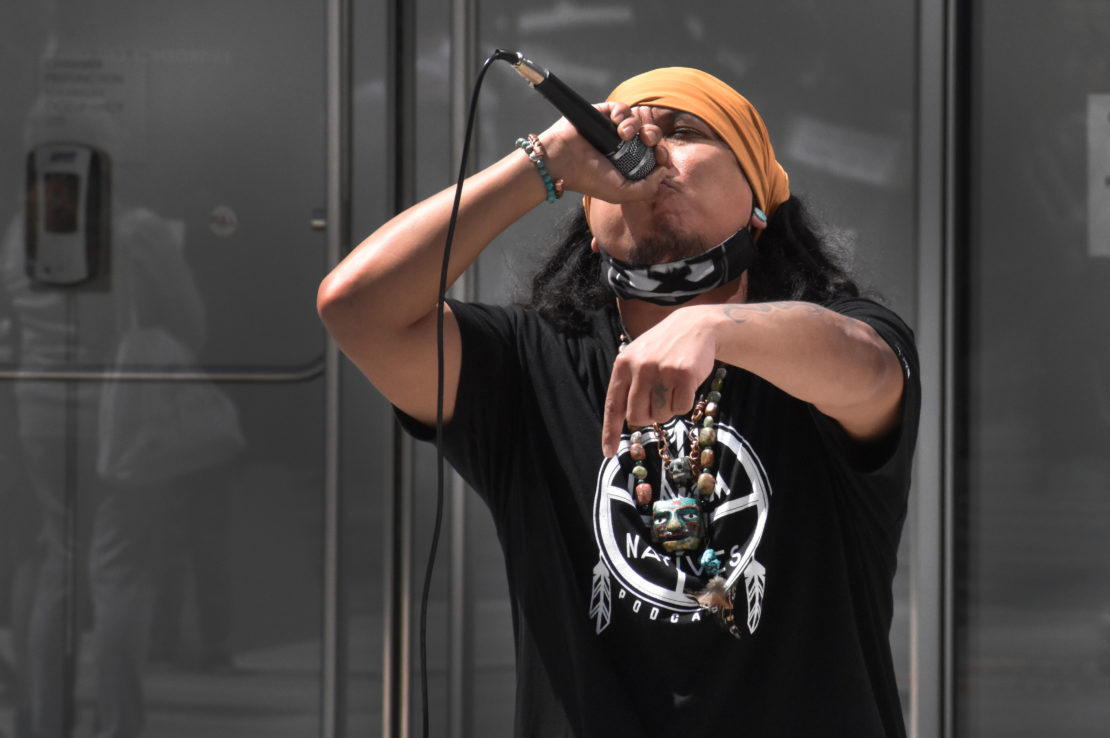 Tenant advocate identified as Sub 1 performs a song during a rally in Downtown Long Beach on Saturday, March 27, 2021. Photo by Sebastian Echeverry. 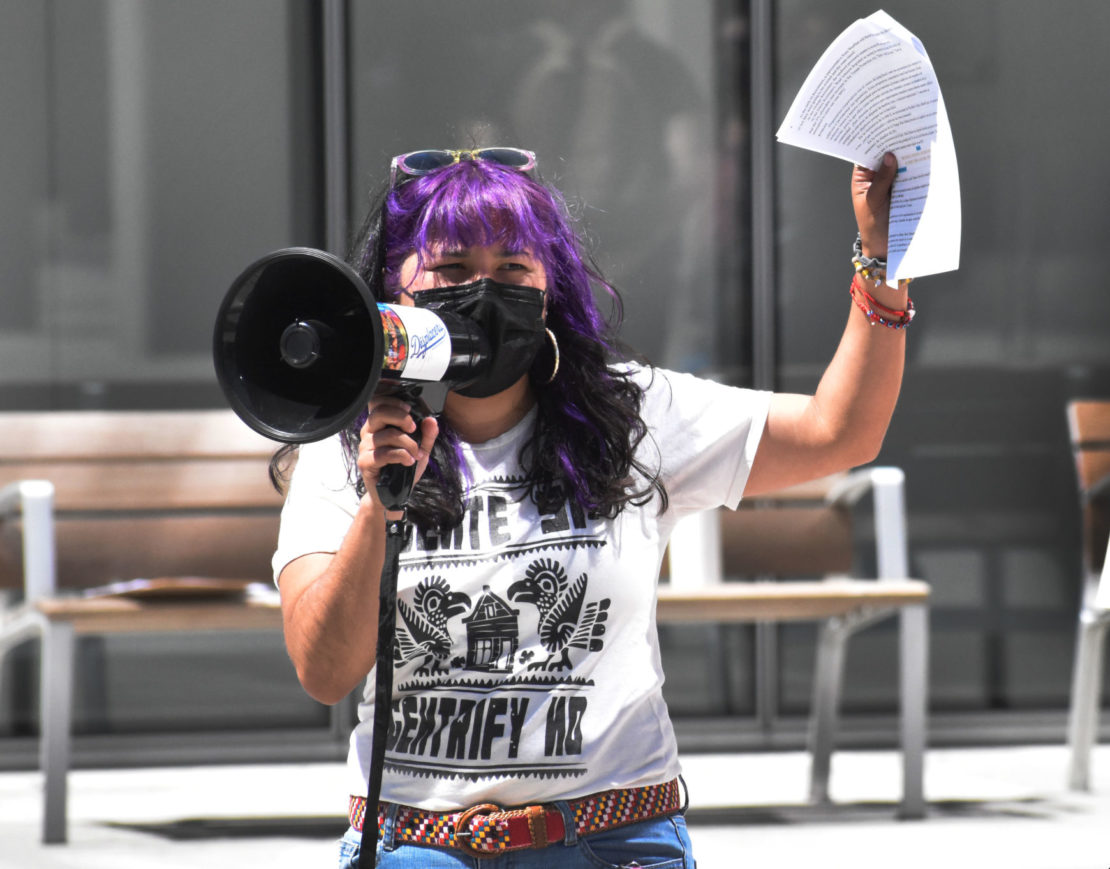 Editor’s note: This story has been updated to correct the organization Maria Lopez is affiliated with.