The Beacon, an $85-million affordable housing project in the Downtown area, now serving more than 200 veterans and seniors, many of whom have experienced homelessness, celebrated its opening last week, nearly a year after its completion.

Century Housing, an affiliate of Century Villages at Cabrillo, a supportive housing community in West Long Beach, premiered in a virtual grand opening last week announcing the completion of its Beacon complex on the corner of Long Beach Boulevard and Anaheim Street.

The opening celebration by Century Housing and the long list of partners that helped with the project came nearly a year after it began admitting residents due to delays from the COVID-19 pandemic, Bartek Malecki, assistant vice president of marketing for Century Housing, said.

The Beacon, a 160-unit housing complex, broke ground in 2017 and was completed in early 2020. It’s made up of two buildings, the five-story Beacon Place and the seven-story Beacon Pointe, and is mixed-use, affordable and permanent supportive housing community, according to the Century Housing website. 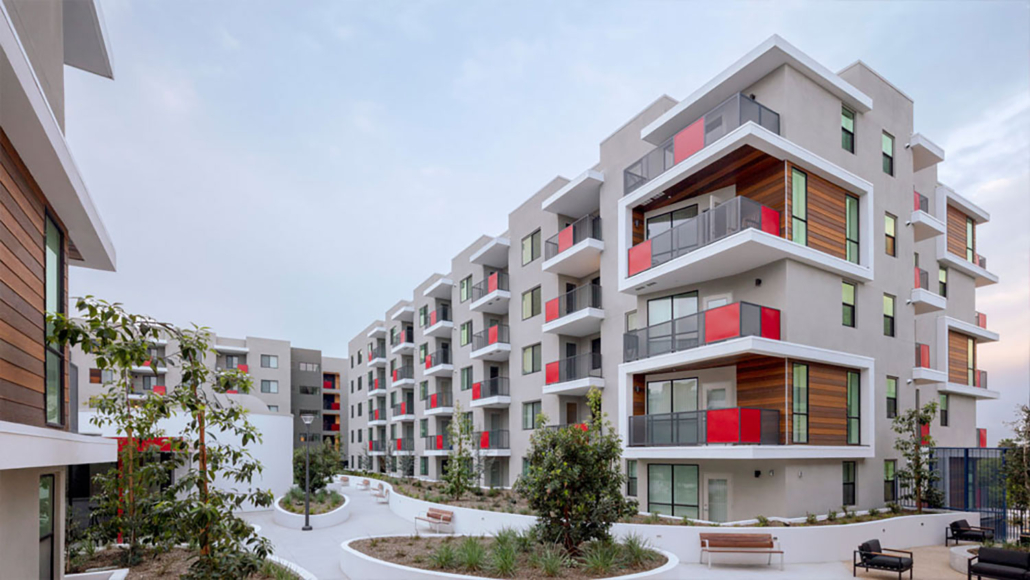 Beacon Place, one of two buildings that make up The Beacon, in Downtown Long Beach. Photo courtesy of Century Housing.

Beacon Place offers 39 permanent supportive homes (one- and two-bedroom) for disabled and homeless veterans. The more visible building, Beacon Pointe, offers 121 apartment homes (one- and two- bedroom) with 61 units reserved for formerly homeless seniors and 59 units reserved for low-income seniors. Each building has one on-site manager unit occupied, and residents are provided with free mental health services, according to the website.

“The completion of The Beacon represents an extension of our work in West Long Beach…” Darroch Young, Century Housing board chair, said in the virtual grand opening.

Beacon resident Kevin Snow, who has experienced homelessness for 14 years, moved into a Beacon unit in January 2020 and said it’s been a “godsend.” He said he pays $177 per month for rent.

“I’m off the street,” Snow said in a statement. “I have security, it’s quiet, it’s clean.”

Currently, there are just three vacancies at Beacon Place for veterans, who are instructed to sign up with the city’s Coordinated Entry System, which is run by the city’s Multi-Service Center, according to Andrea Santana, development coordinator for Century Housing. Two other vacancies at Beacon Pointe are currently being filled by the Long Beach Housing Authority, Santana said.