Lord Windsor Coffee shop in Alamitos Beach was boarded up Tuesday morning after a driver plowed through its storefront Monday afternoon, leaving a pile of rubble and glass.

Police arrested the driver, identified as Alonzo Harbin, 29, on suspicion of felony DUI and driving on a suspended license for a previous DUI conviction, according to the arrest log. Harbin crashed just a few blocks from his home address listed in police records.

A police spokesperson would not specify what Harbin’s blood alcohol content was at the time of his arrest but said that it was at least .08, referring to the penal code violation listed on the department’s arrest log.

The spokesperson also declined to say how many previous DUI arrests Harbin has had but said that the arrest log indicates that it was at least one. The LBPD is not allowed to disclose criminal history, the spokesperson said.

The shop had been closed for business Monday for just about 30 minutes before a black SUV slammed into the facade of the coffee shop that has sat at the corner of Third Street and Cerritos Avenue for over nine years. One woman, who was in a vehicle that was struck by Harbin’s vehicle, went to the hospital with non-life-threatening injuries.

Had it happened any earlier the situation could have been even more tragic, the shop’s owner said.

Wade Windsor, the owner, said two women had just finished up their drinks and a father and daughter were playing outside the shop about 15 minutes before the crash. Windsor was training a new employee as they heard a loud noise before the SUV crashed through the shop’s entrance.

“I was just about to send him out to get the patio furniture,” Windsor said of the employee. “We’re pretty lucky.”

Windsor said he’s hopeful that the shop can reopen by early next week, but it’s dependent on how things work out with the shop’s and the building owner’s insurance companies.

The sheared off fire hydrant also didn’t dump water onto the roof of the coffee shop, which could have caused more damage, Windsor said, referencing the November 2020 crash that closed Royal Cup Cafe’s doors on Redondo Avenue.

“The water was flooding onto the Third Street instead of onto the building,” Windsor said. “We really dodged a bullet there.” 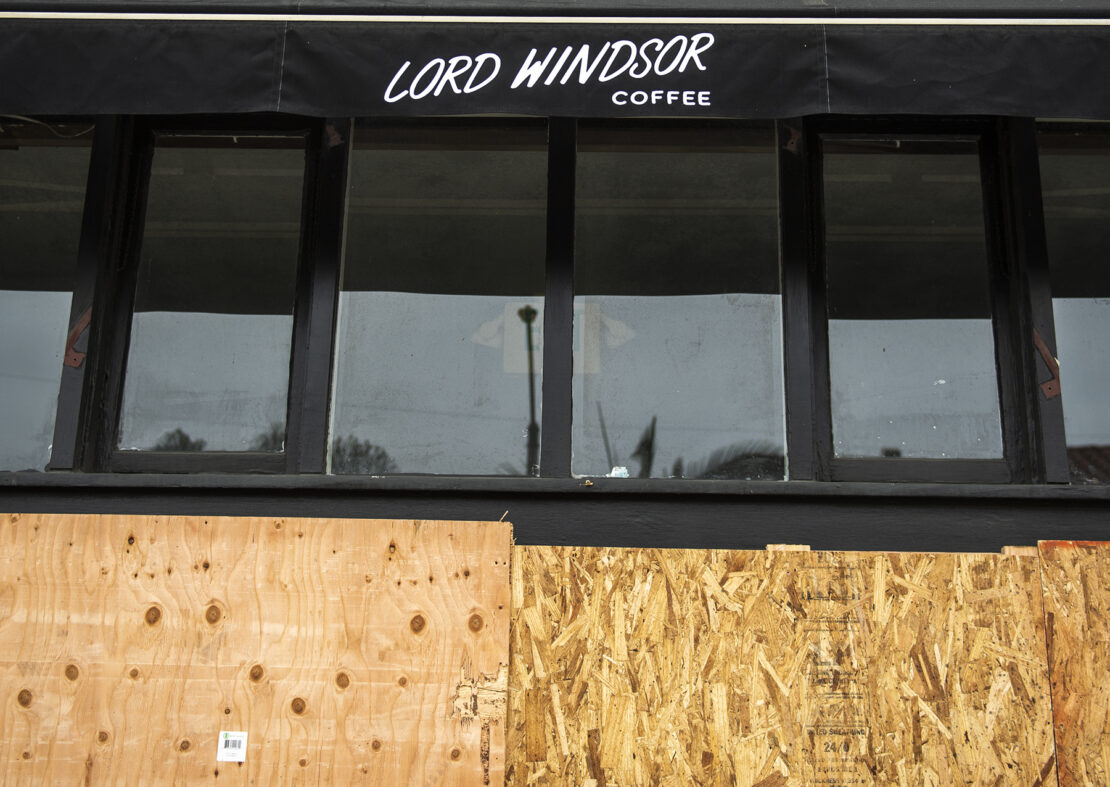 A boarded up Lord Windsor Coffee shop after a driver smashed through the front wall of the business the day before in Long Beach Tuesday, May 11, 2021. The driver was charged with a DUI. Photo by Thomas R. Cordova.

Harbin sheared off a fire hydrant in front of the coffee shop, damaged a parklet outside the shop and damaged traffic signs and multiple other parked cars, according to police. Officers arrested Harbin near the coffee shop after he tried to flee the scene, police said.

Harbin is being held on $100,000 bail, and because he is accused of injuring someone while allegedly driving drunk, charges filed against him could rise to the felony level, an LBPD spokesperson said. Harbin was still in custody as of Tuesday morning.

Windsor said a neighbor told him that he physically got in front of Harbin’s vehicle to prevent him from leaving the scene, at which point Windsor said Harbin entered the shop to say that he wasn’t intoxicated and offered to give Windsor his policy number. But Windsor said that amid the chaos and the adrenaline, there was no exchange of information.

“To be quite honest, I was pretty stunned for a good 20-30 seconds before I realized the entire front of my shop was gone,” Windsor said.