The Book Truck founder Elizabeth Dragga can vividly remember the first book she read and loved. It was “Bridge to Terabithia,” and she finished it in the back of a car while on a road trip with her parents.

“I was just hysterically sobbing, and it was just that moment of feeling so impacted by a story,” said Dragga. “I actually reread that as an adult. I found the copy at my parents’ house (in Texas) … and I read it on the plane back to California, which was a huge mistake because even though I knew what was gonna happen, I had tears streaming down.”

It’s that deep connection to stories that Dragga hopes to inspire in teens across Los Angeles County, which is considered a book desert due to its lack of easy access to books for many youths.

While many literacy programs exist for young children, teens in particular often get left behind, explained Dragga, which is where The Book Truck comes in, designed to get books directly into the hands of teenagers most in need.

“Kids that haven’t grown up having access to books often just don’t have those basic skills to feel competent around books and reading, and so our whole program is designed to remove those barriers,” said Dragga.

The Book Truck was born while Dragga was working in a children’s bookstore in Los Angeles that had a corresponding nonprofit. The program would match customer donations, gifting books to other organizations or teachers in low-income schools.

“We had tons of people taking books for elementary school kids, and nobody was taking the books for the teenagers, … and this was back in like 2010, right when this kind of renaissance in YA literature was happening, so it was like ‘Twilight’ and ‘Hunger Games,’ and so much exciting stuff was happening for teens,” said Dragga.

Without anyone to distribute the young adult books, Dragga decided to take matters into her own hands, bringing them to foster youth group homes and gifting them herself.

“I would just have conversations with the kids, doing essentially what I did as a bookseller, which was to help them figure out what they liked to read,” said Dragga. “Going into it, I always felt like I’m gonna have to convince them about how awesome reading is, and that has actually never been the case.”

The initiative began to grow, and in January 2012, The Book Truck gained nonprofit status.

“I thought …  if I could connect kids with books and reading, then you sort of empower them with the ability to teach themselves anything or to really take control of their own education,” said Dragga.

The next year, Dragga took on the role full-time, and the physical book truck was introduced, allowing the organization to have larger-scale events, similar to a pop-up book fair, except with free books instead of ones for purchase. 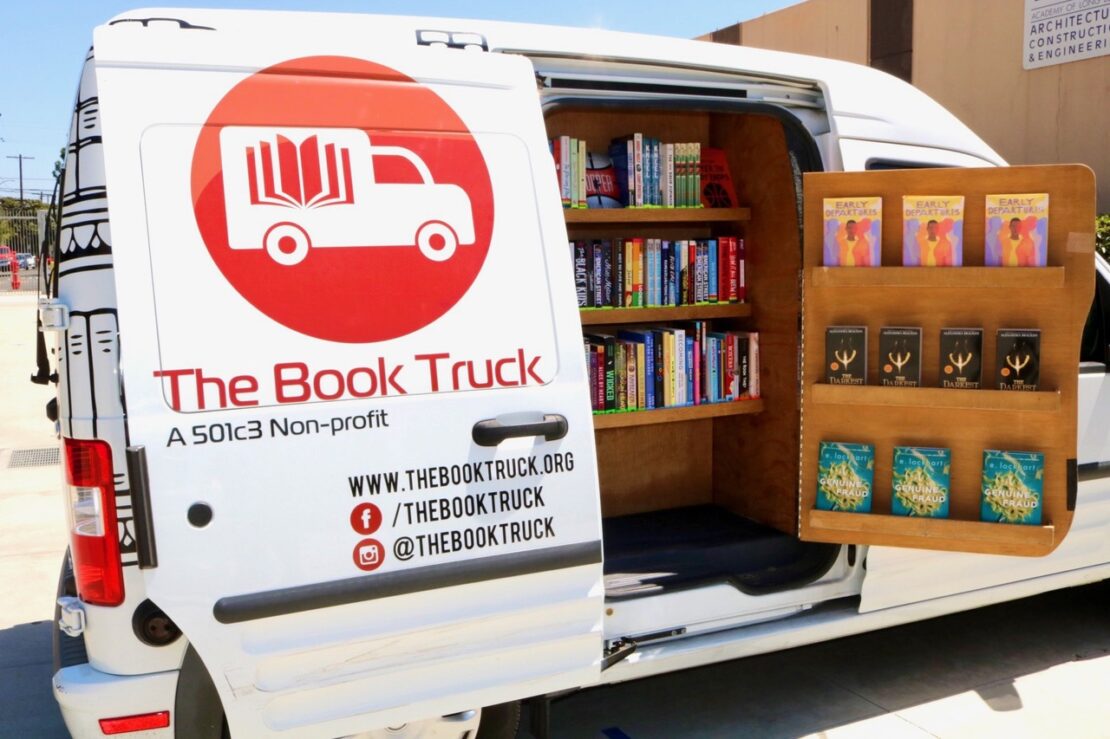 The Book Truck’s truck can hold about 600 books, and includes bookcases, as well as library carts that roll out during in-person events. All books are geared specifically for teens, and are categorized by teen volunteers to provide extra accessibility. Photo courtesy of Elizabeth Dragga.

Generally, tables are set up with piles of books, (the truck can hold about 600), all categorized by The Book Truck’s teen volunteers with a teen-friendly genre system. For instance, romance books are labeled with a heart. Thrillers or action/adventure books have a skull and crossbones. All the categories are designed to make finding a new favorite book as easy and accessible as possible.

Of course, all books are geared specifically towards teens, said Dragga, and the organization prioritizes offering diverse titles that reflect the kids and communities being served.

Teen volunteers even include Post-it Note blurbs of five words or less on some of their favorites.

“It could be telling them about the book, or it could just be like, ‘Oh, my gosh, I could not put this down,’” said Dragga. “One of them was like, ‘This book gave me nightmares.’ Thrillers, action, horror is the most popular category hands down, so they’re always looking for kind of scary, action-thriller stuff.”

For a teen who’s maybe never read a book they liked or has never read a book outside of school, it’s all about finding the right fit, and making sure that teens are choosing the books for themselves, said Dragga.

“It’s just an opportunity to pay attention and ask questions and let them really lead the process,” she said.

For Dragga, the mission of The Book Truck is not only to provide access, but to develop intrinsic motivation to read, which involves establishing competence, autonomy and relatedness.

“The only way you develop reading skills is by practicing, and so you have to get them to buy in and find a book that they love and get them reading in their free time so that they’re getting all those benefits of being a literate person,” said Dragga. 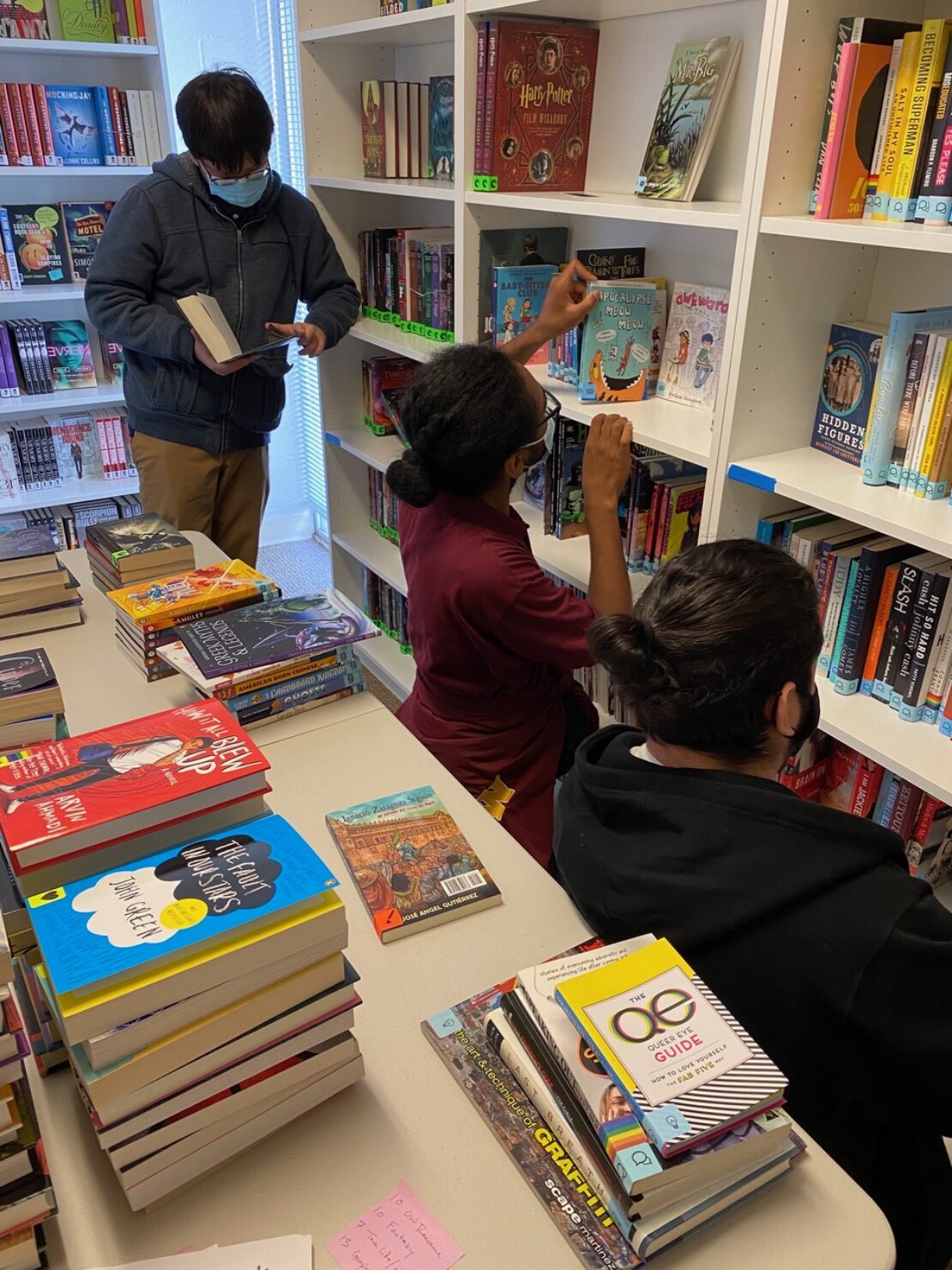 Teens from the YMCA collect books for a giveaway library at The Book Truck’s office at the Nonprofit Center in Long Beach. All teen volunteers receive training to help recommend books to their peers. Photo courtesy of Elizabeth Dragga.

The benefits are plentiful. Not only is reading linked to better educational outcomes, lower incarceration rates, and lower teen pregnancy, it can also foster an entirely new community and sense of belonging, said Dragga.

“Whether it’s using reading as an escape to get out of a situation that is causing pain or mental distress, or whether it’s reading to see someone else who’s gone through something that you have gone through, it helps create that feeling that you’re not alone, that somebody else has done this, and then also becoming part of a community of readers and having friends to talk about books with,” said Dragga.

While The Book Truck initially focused more on the Los Angeles area, its recent years of expansion have centered on Long Beach, an exciting prospect for Dragga.

Through partnerships with community organizations that already interact with low-income teens—such as Long Beach BLAST, Operation Jump Start, and YMCA Youth Institute—as well as with high schools including Wilson, Browning, and Jordan, plus alternative schools like PAAL Academy, Beach High School and Reid High School, The Book Truck has tripled the number of people served in Long Beach since last year, providing literacy programs to over 1,600 Long Beach teens and transition-age youth over the last school year.

“Now when we’re doing larger-scale events, we are mobbed by teenagers, I mean, huge crowds,” said Dragga. “They’re just so excited to get their hands on books.”

Apart from its large-scale book events, often reaching 200 to 800 people at a time, since the pandemic, the organization also began distributing Lit Boxes, or boxes of books to locations where teens gather, such as schools, other nonprofits, youth homes and shelters.

“(Lit boxes) gave us the opportunity to serve some of these kids that we hadn’t necessarily been reaching with the events,” said Dragga.

But when in-person events returned this past spring, demand basically doubled, a pattern Dragga anticipates carrying into the fall.

“There’s just something that happens when you find the one book that sort of flips that switch that makes you go, ‘Oh, this is what everyone’s talking about, this is what reading is,’” said Dragga.

Dragga hopes to continue expanding across Long Beach over the next couple of years and then see where it goes from there, especially given the flexibility of offering both in-person events as well as Lit Boxes.

“All the kids that we work with have kind of an awareness that reading is important, … so that’s being communicated in the schools, which I think is one of the reasons why they’re so open to talking with us,” said Dragga.  “But being able to be that spark is just one of the best parts of doing this.”

Donate to The Book Truck’s Amazon Wishlist here. If you’re a teen interested in volunteering with The Book Truck, fill out an application to get started.