After graduating from Cal State Long Beach’s theater department in the late 1990s, Eric Hamme and Matthew Anderson knew there was a space in Long Beach for the edgier, darker theater they wanted to create.

While they didn’t have an exact plan, they knew they wanted to keep working together, and that they wanted to create content that pushed boundaries while bringing accessibility to theater.

Influenced by the idea of a “dissolving the wall” between performers and audiences, and eliminating the elitism that exists in some theater spaces, The Garage Theatre began to form, along with other co-founder, Jamie Sweet.

“We were very aware that the audience makes us who we are, and we wanted to do shows for us and our audience kind of reflected that, and they weren’t going to see some highfalutin Victorian thing,” said Anderson, the theater’s artistic producer. “It was going to be a story that spoke to them because it spoke to us.”

But first, the theater needed a play to begin with.

Although “the internet was just kind of a thing,” said Anderson, they discovered an online and royalty-free script, called “Scenes from the New World.”

It was only offered to students or theater companies just starting out, and they knew they had found their debut production.

As rehearsals began at their homes, Hamme and Anderson searched for a space, finding it in an underground (and illegal) club, mostly used for band rehearsals and parties.

“When we walked in the door, we were sort of young and stupid, but we were just like, ‘We’re your resident theater company’ . . .  so we kind of just pushed ourselves in,” said Hamme, the theater’s managing director.

After a successful first show, the venue got shut down, and Anderson and Hamme were back at square one, reaching out to everyone they knew, which at the time, wasn’t a lot of people.

They were eventually able to find a venue for their second show, at a place called “Artists Reaching Kids”  — prompting a more G-rated second show, said Hamme.

“It was a cool place to start, this illegal underground club with all these bands, and rock and roll dudes, and all the elements that come with that,” said Hamme. “But being shut down kind of moved us in the direction of becoming a little bit more part of the arts community.”

In 2005, The Garage Theatre found its permanent home, a space on Seventh Street that allowed for both stability and year-round programming.

While it was a relief to finally have their own venue, Hamme and Anderson had significant work cut out for them.

“Our space was when we moved in, it was not good,” said Hamme.

With the ceiling falling down and no air conditioning, theater-goers would receive paper plates at the start of each show to use as fans.

“Our more experienced audience members would come in shorts and tank tops, (and) the bathroom was like a serial killer’s bathroom,” said Hamme.

As the space slowly underwent renovations, audience members returned again and again for The Garage Theatre’s experiential and thought-provoking performances.

“It just seemed like the more we would sort of push the envelope, the more people would show up,” said Hamme. “So we definitely tapped into some sort of small little niche in the community.”

By 2019, Anderson and Hamme were looking back toward their time at Cal State Long Beach, and at possible ways to build a bridge to students in the same position they once were in, by providing a space to experiment, create and produce.

“That was our biggest gift,” said Anderson. “So to be able to give that back to whoever is wanting to move forward in that direction, that’s where our future is.”

But any potential plans with the university or its students were put to a pause the next year, as the pandemic brought live performances to a standstill.

During the nearly two years of on-and-off COVID restrictions, Hamme and Anderson debated creating a performance over Zoom, but it just didn’t feel right, even as financial troubles loomed.

“We were able to hold on for about a year, and then things were looking like maybe they had run its course,” said Hamme.

After building up and developing their theater for the past nearly 20 years, and not wanting to start from scratch, Hamme and Anderson decided to reach out to the community one last time, setting out to raise $10,000, which in the theater world, was already quite a large amount, Hamme said.

“The community really stepped up and kind of adjusted my personal view of the theater and where we stand in the in the community,” said Hamme. “Getting that love and that support and having people tell you you’re important, we need to stick around, was really something else.”

Now that the theater had the funds to continue, Anderson and Hamme were tasked with determining what show audiences would want to see, after nearly two years without live theater.

In March, the theater returned with the world premiere of “The Private Lives of Imaginary Friends,” by Ryan McClary (also a Cal State Long Beach alum), and directed by Anderson. 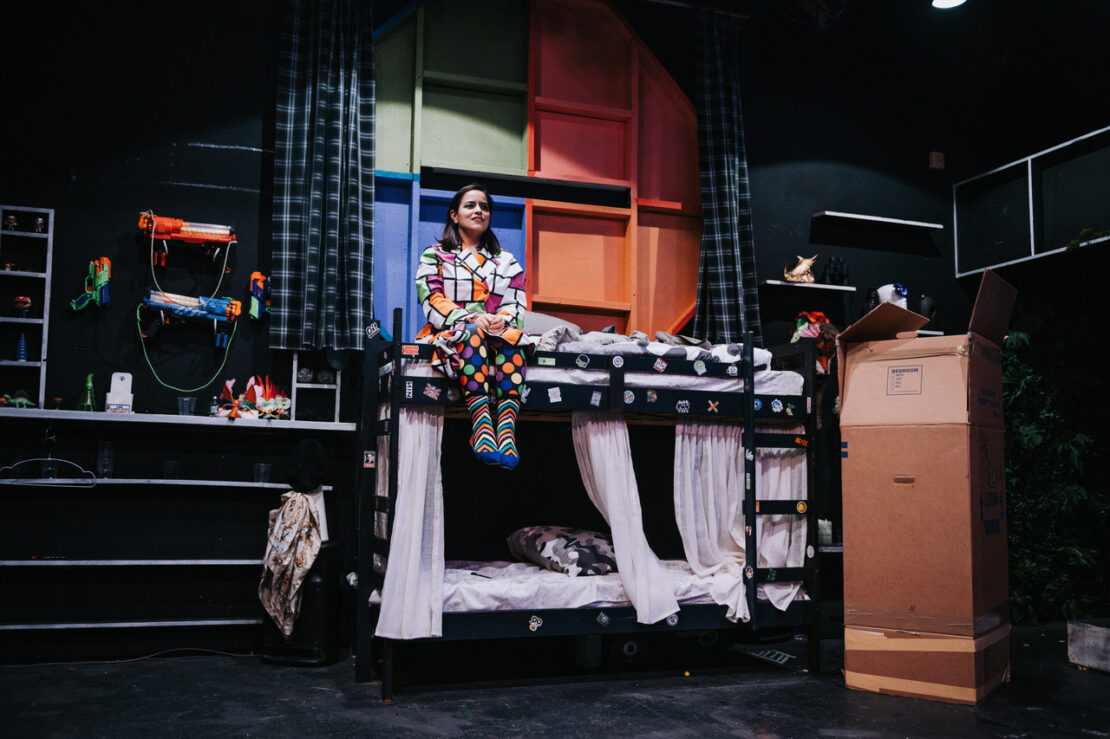 The Garage Theatre returned with its first show since the pandemic with the world-premiere of ‘The Private Lives of Imaginary Friends,’ by Ryan McClary, and directed by co-founder Matthew Anderson. Photo courtesy of FreshFrameFoto.

While the play is not explicitly about the pandemic, the show explores loneliness and isolation while navigating through the world with preconceived notions, explained Anderson.

“After everybody being alone for so long, to have them come back together, and to share in this experience about what it means to be alone, it’s just this beautiful mix of emotions and feelings that can only be experienced with other people,” said Anderson.

While the pandemic put many theaters under pressure to generate much-needed revenue, due to the successful fundraising efforts, The Garage Theatre felt no such pressure, and was able to wait until it felt safe and the timing was right, said Hamme.

While the play nearly sold out each night of its month run, for Anderson and Hamme, it is about more than the show, but the connection that theater creates.

“Seeing that theater filled with people again, and seeing audience members introducing themselves, talking, sharing their bottle of wine with people . . . sometimes intermissions go super long . . . (because) people just don’t stop talking to each other,” said Hamme. “It turns into like a ‘Hey, now we have more show,’ and I love that, when there’s a buzz in the air, we can just feel it in the room like people are happy to be there.”

After 20 years of performing for the community, while there can often be pressure to grow and expand, and it can be frustrating when that doesn’t happen, for Hamme, the pandemic created a time to push that all aside.

Looking ahead to the rest of the season, theater-goers can attend “Mercury Fur,” by Philip Ridley from June 24 to July 23, “The Drowning Girls,” by Beth Graham, Charlie Tomlinson, and Daniela Vlaskolic, directed by Hamme, Aug. 26 to Sept. 24, with the year concluding with a family-friendly puppet show of “Love’s Labour’s Lost: A Puppet Play With People,” from Nov. 11 to 19 and Dec. 1 to Dec. 17.