This nearly century-old home in Bluff Park is on the market for the first time, listed at $3 million • Long Beach Post News
- ADVERTISEMENT -
BEST FEST 2022® Live and in person — June 16. RSVP NOW

The architect Clarence “C.J.” Smale is best known for his work in Los Angeles, where he designed movie theaters and other larger buildings as well as some stately residences during the 1920s. Among his more notable works are the homes he built for Buster Keaton and Natalie Talmadge at 543 S. Muirfield Road in 1923, his own home at 625 S. Rimpau Blvd., in Hancock Park in 1923, and the much-admired Smith House, which he designed in the style of Zig-Zag Moderne at 191 S. Hudson, also in Hancock Park. 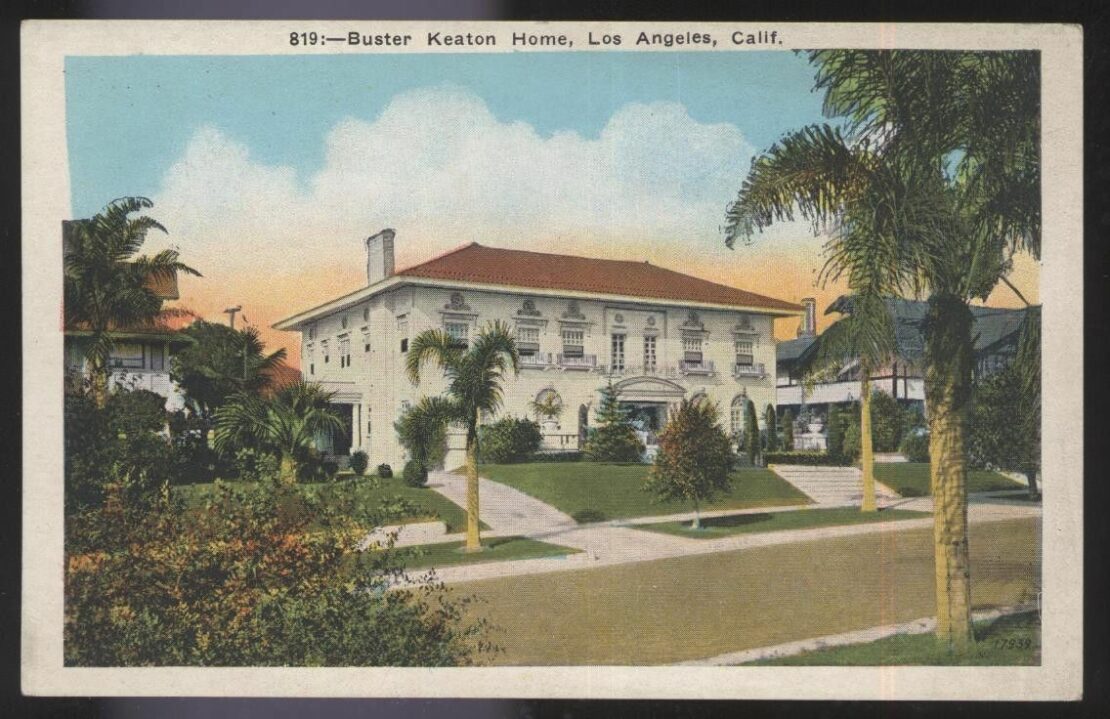 Postcard of the home of Buster Keaton and his wife Natalie Talmadge designed by C.J. in 1923.

In the midst of his popularity and flurry of construction, he made time to do this large and stately home in Long Beach in 1925, which is soon to hit the market for the first time in its 97-year history, at 1300 E. First St. in the historic Bluff Park district.

Listed by Realtor Costanza Genoese-Zerbi of Redfin at $2,988,888, the two-story, 4,056-square-foot, six-bedroom, four-bath homes sits on the terminally quiet stretch of First Street at Paloma Avenue—it’s as emblematic of Bluff Park as you can get, with little noise from traffic—in fact most of the traffic on First Street is the constant parade of neighbors walking their dogs. It feels miles away from the stretch of mansions and various eclectic homes lining Ocean Boulevard just a short block to the south.

The home has had two owners in just shy of a century. It was built for Dr. Dean E. Godwin and his wife Myrtle, with Myrtle pretty much riding herd on the construction, showing up every day to see that things were being done to her exacting specifications. She wanted the framing done with two-by-sixes rather than two-by-fours, giving the walls a bonus two inches of thickness; she wanted the plaster on the walls to be air-dried rather than by the use of salamanders—electric heaters, that can result in the plaster cracking over time. 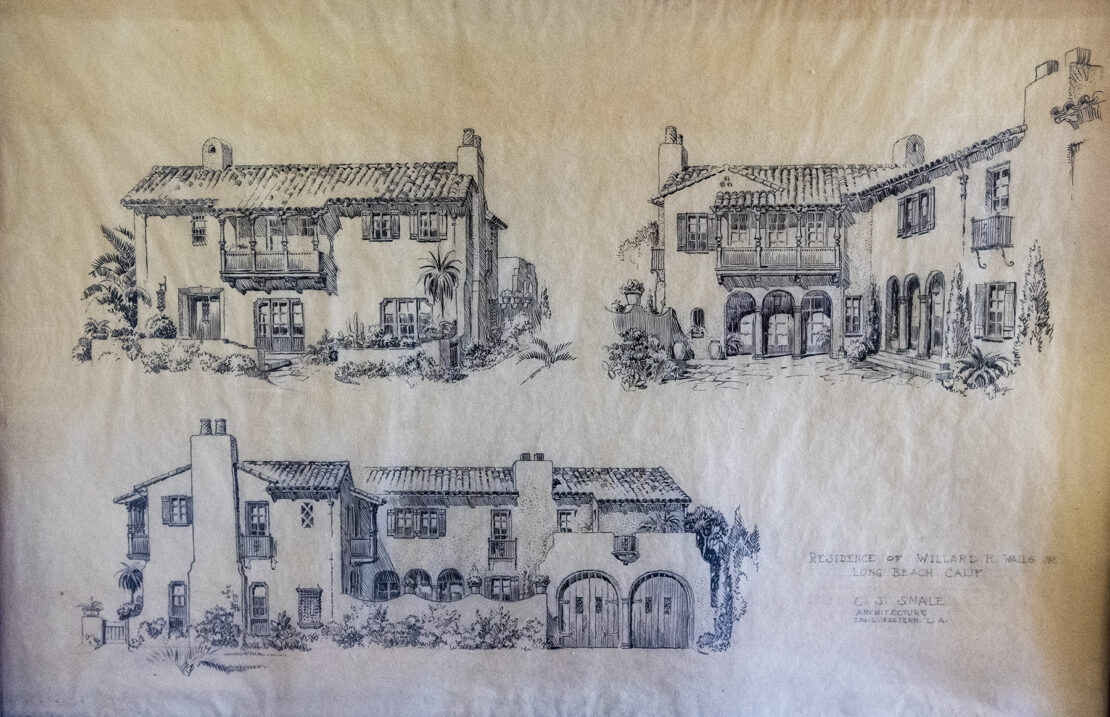 In the 1950s, the Godwins once again hired Smale to rework rooms on the Paloma Avenue side of the home to better accommodate the space for an attached apartment that could be, depending on what doors would be sealed off, either a studio, one-room, or two-room apartment, or simply adding to the home’s total square-footage.

The Godwins kept the house for years after Dean died and until Myrtle moved out due to deteriorating health, and the couple’s two sons wanted to sell the house while their mother was still alive to sign the necessary papers for the sale and avoid whatever complications that could arise from probate and inheritance.

Meanwhile, not too far away, the large family of Willard and Joan Walls was cramped in a small three-bedroom home on St. Joseph. The family’s main house was in Granada Hills, but Joan could no longer bear the heat of the San Fernando Valley. The family of two boys and five girls had been allowed to use for a few summertimes an aunt’s house on Prospect and in 1968, just before school was set to resume, Joan could no longer face going back inland, so they bought the St. Joseph home, where the five girls slept together in a small bedroom that, later, their brother Kip described as wall-to-wall beds.

Still, the small size of the home, in addition to the fact that the family still owned a house in Granada Hills (a home that was dead to Joan), was untenable for any length of time, so the couple put both houses up for sale and sold them within days of each other, and the Walls went rapidly from owning two homes, to owning none.

Through a friend, Willard heard that the Godwin sons were considering selling the home on First Street. In 1968, Willard made them an offer of $55,000 and Joan helped to rush the paperwork through and the escrow closed in just 30 days, in an era where it usually took 60 to 90 days, and the home was sold without ever being listed. The sale was ideal for Willard, who was a stockbroker for Merrill Lynch in their Hollywood office, but the firm had recently opened an office in Downtown Long Beach’s Oceangate.

Even though the First Street home had six bedrooms, the girls still shared one room, though it was considerably larger, the primary one in the residence. 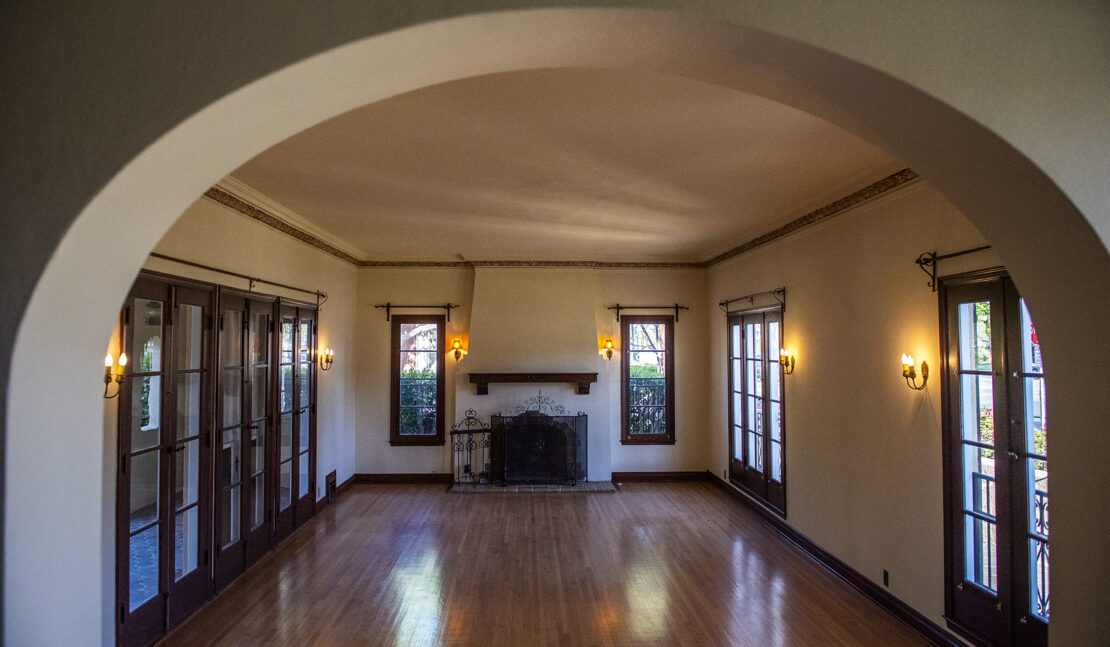 The front room and fireplace of the C.J. Smales-designed home in Bluff Park. Photo by Thomas R. Cordova.

“I was 10 when we moved in, recalls Kip, who now lives and works in Oregon. Casey, the eldest of the children, was a teenager. “He staked out the basement and put a waterbed down there,” said Kip. “There has been a darkroom in the house and my oldest sister later moved in there and put up a loft bed.”

As the kids grew older and moved out, they sometimes came back to the house for a place to stay for a while. “Casey lived there for a number of years after finishing law school at Notre Dame,” said Kip. “I stayed there when I was going to USC and working at the Queen Mary, my sister KT lived in the apartment with her husband and daughter for a while.”

Even friends of the kids would spend some time living in the house for a month or longer.

Walking through the house now, there are echoes of the memories of a large family growing up in the home, including many evenings by the fireplace where the children would all sing together, accompanied by Casey or Kelly on guitar and Kip on drums.

“We had a little performance group we called the Brothers and the Sisters,” recalls Kip. “I think we only performed publicly once or twice, but we all sang all the time. My mother made all the girls wear the same thing. I think she wanted them to be like the Lennon Sisters from ‘Lawrence Welk.’” 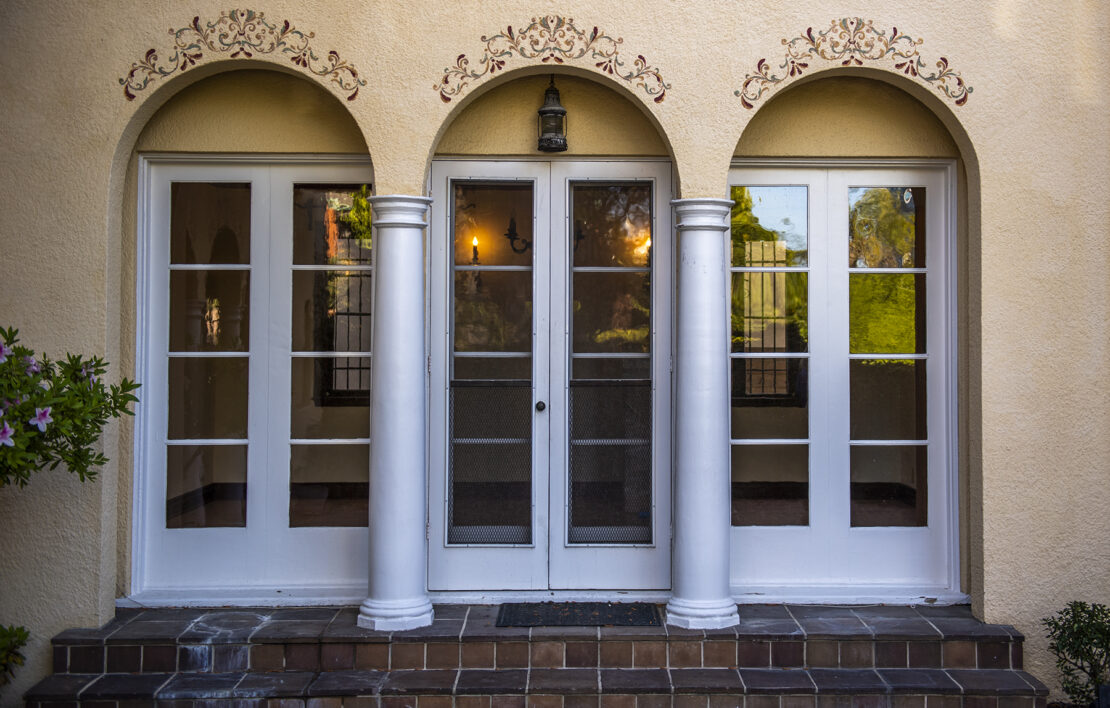 The outside doors of the courtyard. Photo by Thomas R. Cordova.

The home isn’t an opulent mansion and has a strong family feel about it. Unfurnished now, there are rooms at every turn, all with the original hardwood floors and their sturdy plaster walls. There’s a dining room and an eating area in the cozy kitchen with a little fireplace that Joan had installed to replace an incinerator that was there.

“She loved the beach and the cool breeze, but she hated being cold,” said Kip of his mother, who died last Thanksgiving. “So she loved having that fireplace in the kitchen to keep her warm, and we often had a roaring fire going in the living room.”

The kitchen is currently being lightly redone, with new appliances, countertops and backsplash, but they want to maintain the old-time look to it. Throughout the house you’ll find little drawers and cabinets of indeterminate utility—although one thing is explainable: a small door in the wall in the upstairs nursery that opens out above the stairwell so the parents downstairs can hear if the baby is squalling. It’s a low-tech baby monitor. 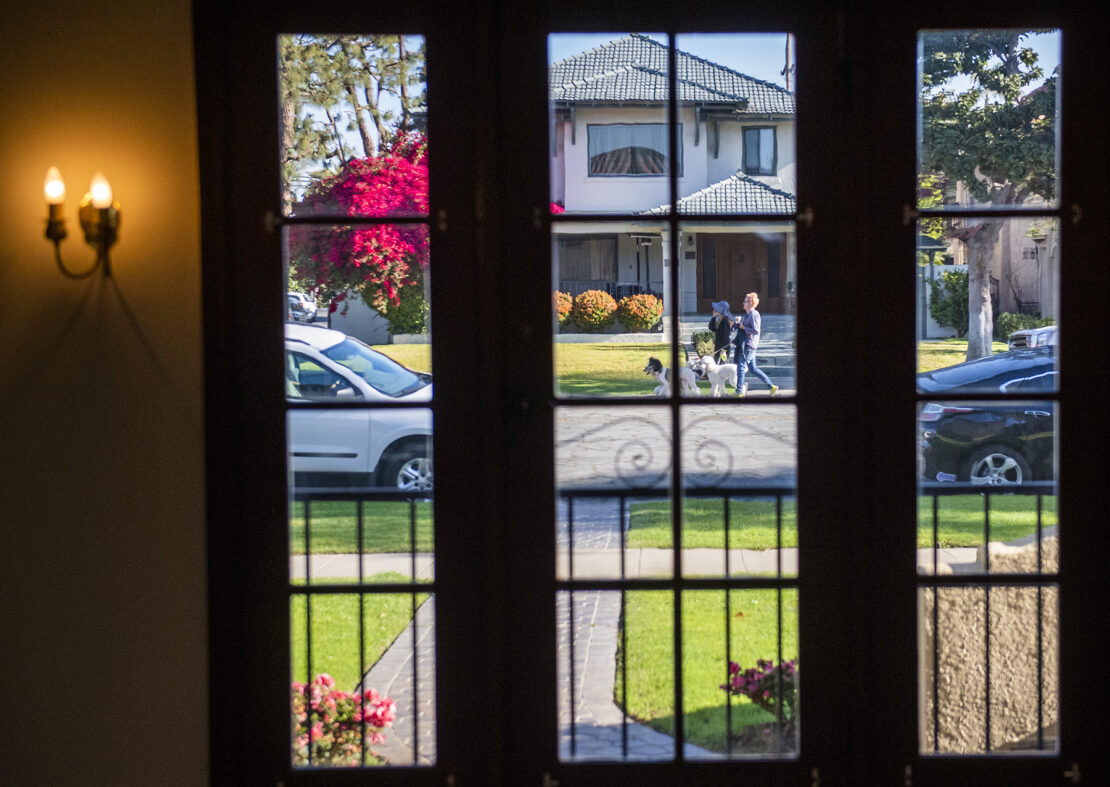 Looking out through the front windows of the front room  and you’ll see the daily traffic of dog-walkers. Photo by Thomas R. Cordova.

The home, even when it hits the market in a couple of weeks, is not turnkey. Much is being left for the new owners to deal with as they see fit, including refinishing the myriad wood-trimmed windows and doors and cabinets throughout the house and installing new tile on the bathroom floors and of course deciding on whether to make the apartment into a studio or one- or two-bedroom units or just expand the house, which to this day remains beautiful with numerous balconies and windows and an inviting courtyard with a fountain (that also needs repair) and a bit of Long Beach history: a serpentine crack running along the patio that was caused by the 1933 earthquake.

“People who are looking for homes in Long Beach often are worried about earthquakes,” said Realtor Genoese-Zerbi. “I tell them a house like this one was standing before the 1933 quake and it was standing afterward. It’s going to be fine.”