The manager of Los Amigos Strength and Fitness Center in Signal Hill plans to host a 6 a.m. fitness class on Monday morning, just a few hours after being allowed to welcome customers indoors for the first time in nearly a year.

“We’re just tired; it’s been a really long year,” said Sandy Bond, manager of the gym, which at one point was down to just 16 paying members. “We’ve seen a lot of our friends go under and not open back up. We’re trying to make it through. We lost over 60% to 70% of our business.”

Bond is hardly alone, with a broad swath of local businesses being hurt by strict coronavirus rules. Now that they’re beginning to be relaxed, some are rushing to reopen while others are being more cautious.

Either way, many business owners have decisions to make and new regulations to interpret, after Long Beach announced Friday that a range of them, including restaurants, movie theaters, museums and gyms, will be allowed to host customers inside, with limited capacity, beginning at 12:01 a.m. Monday.

The loosened restrictions came as COVID-19 cases in Long Beach, and across the state, have plummeted after a winter surge that nearly overwhelmed hospitals. But Long Beach, as well as Los Angeles and Orange counties, will enter the “red” tier, with officials hoping that the region can soon move to open even more businesses in a matter of weeks.

So what does the opportunity to reopen mean for small restaurants, local museums, theaters and other businesses that have endured pandemic closures for so long?

“We’re definitely excited,” he said, adding that he’s enjoyed expanding outdoor dining, as it has added to the sense of community at his restaurant. 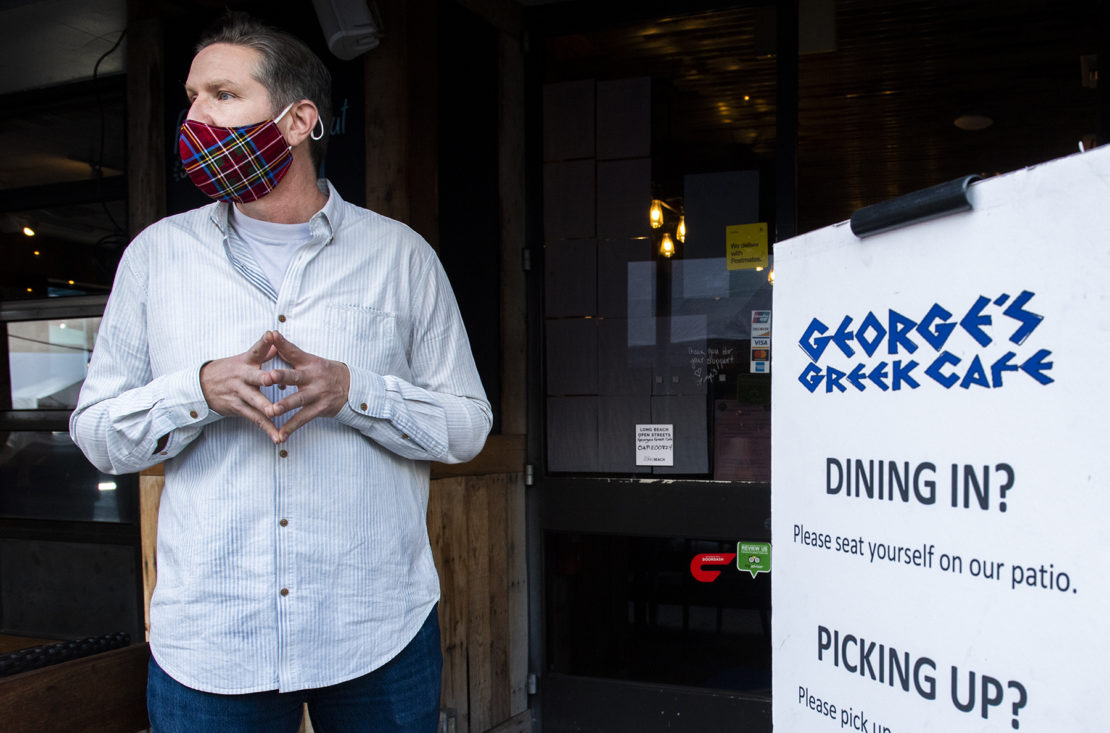 In North Long Beach, Oscar Ramirez, owner of Peruvian restaurant El Pollo Imperial, had barely heard the news about indoor dining coming back. He said that, thankfully, his business survived the toughest months of the pandemic due to the drive-thru option at his restaurant.

His location is small, but Ramirez said that starting Monday, he would organize about four tables to allow the limited indoor dining.

Denny Lund, owner of Tantalum in Marina Pacifica and Schooner or Later at the Alamitos Bay Marina, said he’s “thrilled to death.”

Schooner or Later has been doing better than ever because the eatery was allowed to add outdoor dining tables, Lund said.

“Tantalum has some outdoor dining, but it’s good that I could open up some of the indoor area,” he said. “We have enough people working outside that I don’t think I’ll need to hire any more right now, but we’ll be bringing employees back as things loosen up more as we go along.”

Many restaurants are working to open indoors by early next week.

“We have to,” said Dene, who owns Michael’s on Naples and Michael’s Downtown. “It’s a point of survival.”

He said restaurants have been planning and hoping for this news for months: “There are so many families that have been hurt because of this, and I think they’re excited about getting back to work.”

John Morris, general manager of Boathouse on the Bay at Alamitos Bay Landing, said his facility plans to seat about 70 people indoors, in addition to the current patio dining.

Kerstin Kansteiner, owner of Berlin Bistro and Portfolio Coffeehouse, said the change in rules is especially helpful now because of the recent chilly weather. “With daylight savings, that will have a doubly good effect on things.”

“This is really wonderful to welcome back people,” Kansteiner said. “I just called a dishwasher who hasn’t worked since March 16 of last year, she cried on the phone she was so happy.”

Sterling Steffen, co-owner of Trademark Brewing, said his business will be cautious.

He said Trademark, which does serve food, is still likely weeks away from offering indoor service, noting that they’ve made the decision until the entire staff is fully vaccinated before it thinks about letting customers back indoors.

“We’ve made this far, why would we want to mess it up now by getting greedy?” he said.

Even though they’re allowed starting Monday, museums will take a bit longer to reopen their doors, as logistics and staffing would need to be worked out.

The Pacific Island Ethnic Art Museum pivoted its operations and gallery space for digital programming at the start of the pandemic, said curator Fran Lujan. The facility will have to reformat the space for patrons, she said, adding “I’m a staff of one.”

The Museum of Latin American Art also does not yet have a reopening date.

“MOLAA is reviewing possible dates to reopen safely,” said Solimar Salas, vice president of museum content and programming. “We want to ensure the safety of our staff, docents and volunteers as well as our visitors.”

At the Art Theatre on Retro Row, owner Jan van Dijs, said the target date for the iconic theater’s reopening is April 2—possibly a week earlier now that theaters have the green light.

“We’ve already done our spacing and layout for seating to make sure everyone is the appropriate distance,” he said. 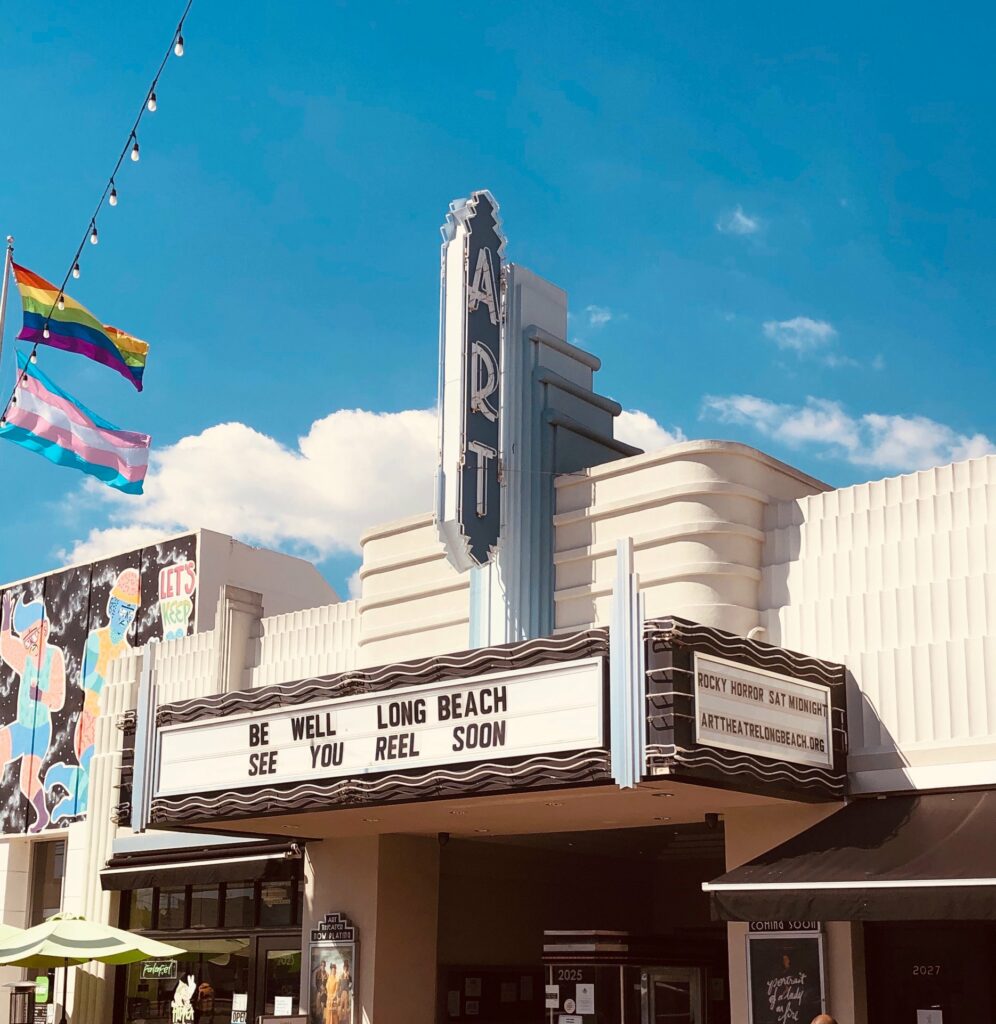 This file photo is courtesy the Art Theatre.

The forced closure was used as a time of rebirth for the Art Theater. Its floors were refinished, its seating rearranged. It was completely repainted. Even its point-of-sale system was updated to offer easier online ticket purchasing and contactless entry.

“There’s not a surface we didn’t touch,” van Dijs said. “We wanted people to come back and it [would] be a noticeable difference.”

After being closed for over a year, van Dijs said he is excited about the possibility of reopening, but added that his expectations over the next few months are low.

“Not everyone is ready to come back to a movie theater,” he said. “I don’t think people will be ready to come back until the fall. That is my gut feeling. But you have to start somewhere, start the process of reopening your business and just keep your fingers crossed.”