For both individuals, the FBI used a combination of online tips, Instagram posts and security camera footage to show the men allegedly took part in the Jan. 6 Capitol breach, according to court records.

Alexis and Bryan Bustos were arrested in mid-November, according to court records. Both men were released on personal recognizant bonds.

Three stills from a video posted by Bryan Bustos while inside the Capitol building. Photos courtesy federal court records

Court records stated that Alexis and Bryan are related “based on their common last name, shared address, and both having a phone number subscribed under one cell phone plan,” but don’t specify how they’re related.

On Jan. 6, a mob of about 800 supporters of President Trump stormed the U.S. Capitol, which at that time was closed to the public, in hopes of overturning the 2020 election in which Joe Biden was elected president. So far, federal prosecutors have charged just over 700 of them with various crimes.

It was just four days after the Capitol breach, on Jan. 10, that the FBI first received an online tip that Bryan Bustos had entered the U.S. Capitol on Jan. 6 with a mob of Trump supporters, according to court records.

According to an affidavit from FBI Special Agent Justin Smet, which is included in the court records, Alexis and Bryan Bustos flew together from California to Washington, D.C., on Jan. 3, and returned to California on Jan. 8.

On Jan. 6, Bryan Bustos posted a picture of himself holding an American flag inside the capitol building on Instagram, according to court records. The FBI matched Bryan Bustos’s driver’s license photo to the Instagram post and security camera footage taken inside the Capitol on Jan. 6 to confirm his identity, according to the affidavit. 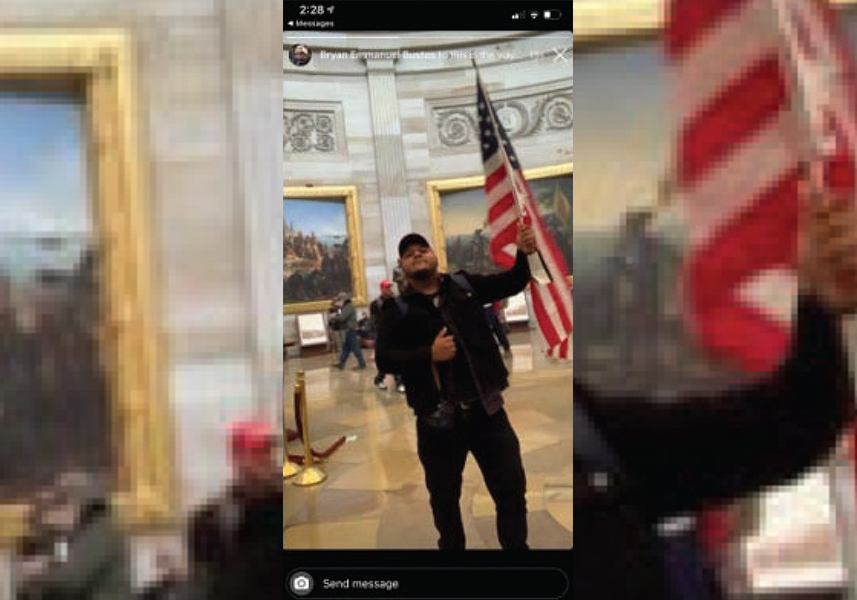 Video footage showed Alexis Bustos allegedly entering the capitol building at approximately 2:27 p.m. on Jan. 6, according to the affidavit. He “entered through the Columbus Door on the eastern side of the building, wearing a black jacket, dark pants, and blue ‘TRUMP’ beanie,” states to the affidavit.

Brian Bustos entered the U.S. Capitol at approximately 2:40 p.m., according to the affidavit. He was carrying an American flag, and also entered through the Columbus door and then proceeded to the rotunda. “While inside the Rotunda, BUSTOS was identifiable in the crowd due to the American flag he carried,” states the affidavit.

Video footage showed both Alexis and Bryan Bustos leaving the Capitol building together at approximately 2:51 p.m., according to the affidavit.

Joseph R. Conte, attorney for Alexis Bustos, declined to comment. Allen H. Orenberg, listed in court records as the attorney for Bryan Bustos, did not return phone and email messages.