During a morning press conference at the park atop Signal Hill on Wednesday, retiring Long Beach Police Chief Robert Luna officially announced he is running to be Los Angeles County’s next sheriff.

Luna was joined by about two dozen supporters, including Mayor Robert Garcia and State Sen. Lena Gonzalez, but a small group of protesters also attended. Four or five people from Black Lives Matter Long Beach frequently interrupted Luna’s speech by shouting him down.

Luna said he entered the race in part because he wasn’t ready to give up the life of a public servant, something he’s been for nearly 40 years. He also accused LA County Sheriff Alex Villanueva of creating “dysfunction and chaos” that has put public safety at risk.

“We can do much better,” Luna said, adding that he is highly qualified for the job because he’s chief of the second-largest city in LA County and is an outsider at the sheriff’s department. 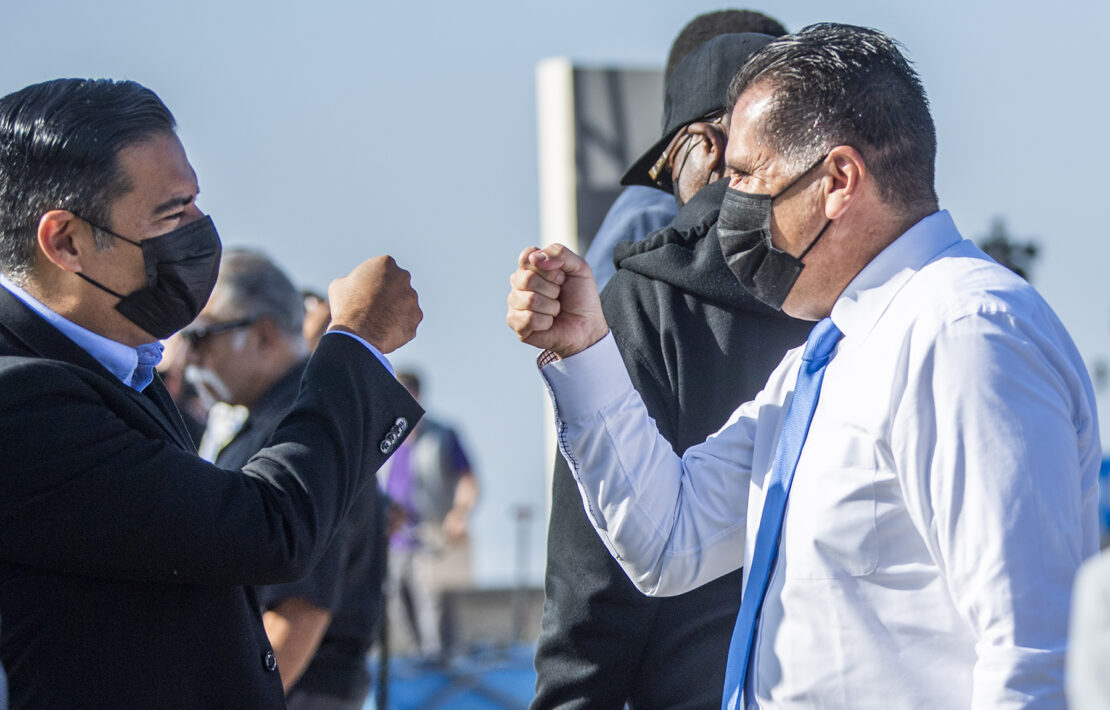 Luna’s entry into the race was first reported Monday by the Long Beach Post after sources confirmed his candidacy in the June 2022 election. Luna is now one of eight candidates, including the incumbent. Villanueva ousted Luna’s predecessor, Jim McDonnell, in an upset during the 2018 elections. McDonnell ascended to sheriff in 2014 after serving as Long Beach police chief for five years.

Garcia announced he was endorsing Luna for sheriff during the press conference and Gonzalez, who had already endorsed Los Angeles World Airport Police Chief Cecil Rhambo, said she would be changing her endorsement to Luna.

“At the end of the day we need a change in leadership, and he [Rhambo] was still part of the sheriff’s department when there were some unethical issues happening,” Gonzalez said, adding that she would be calling Rhambo soon to let him know about her change of heart.

Rhambo testified against former Sheriff Lee Baca during a corruption trial in 2016 but was not accused of obstructing the FBI’s investigation into alleged civil rights violations at LA County jails.

Luna spoke emphatically that things would be different under his watch, pledging to root out the sheriff department’s alleged deputy gangs and fire those deputies who have broken the law. He also pledged to fire deputies who refuse to comply with the county’s vaccine mandate, which Villanueva has refused to enforce.

“Me, as the chief of police, I’ve been pushing vaccinations,” Luna said. “That’s the way we’re going to end this pandemic and the city is moving toward mandates,”   Luna said.

Although Long Beach has announced a vaccine mandate, there’s been no deadline given for when it will be enforced. Luna said he believed the city’s mandate will go into effect at the end of the year, but he is set to retire at the same time.

Luna said that his top priorities if he’s elected sheriff would be to regain the public’s trust in the sheriff’s department, reform the culture of the department and its policies on use of force, address violent crime and homeless, and ensure that deputies had access to counseling services.

“I believe that if you want our deputies and police officers to treat people well, just like here in Long Beach, what I have found out the hard way over the last three or four years, is that you have to have good counseling services because this job is tough,” Luna said.

Four people from the LBPD’s ranks have killed themselves in the last five years, forcing the department to confront what the local police union called a crisis of suicide in the profession.

“We need to make sure you’re getting the counseling services you need and you do away with any stigma regarding getting mental health,” Luna continued, adding that officers fear that seeking help will lead to them being stripped of their guns.