Federal authorities are considering using the Long Beach Convention Center as a facility to provide temporary shelter for the overwhelming number of migrants, many of them children, arriving in the United States from Mexico, sources told the Post.

Convention centers in San Diego and Dallas have already been converted to shelters to help house the thousands of migrants packing facilities at the U.S.-Mexico border in recent weeks.

If the plan goes forward, the children in Long Beach could be housed in the Convention Center’s 45,000-square-foot Arena until being transported to safe housing elsewhere in the U.S., according to sources, who weren’t authorized to speak on the record.

Sources say the facility would be run by the federal Health and Human Services Department, which is responsible for sheltering migrant children after they’re transferred out of U.S. Customs and Border Protection custody.

A spokesperson for the department declined to comment Thursday.

“We will notify state and local officials well in advance of opening any temporary influx care facility,” the department said.

On Wednesday afternoon, two vehicles from the Department of Homeland Security’s Federal Protective Services were parked outside of the Long Beach Arena. Agents were also seen inside the Arena hallway. The agency provides security for federal facilities and also works with the U.S. Customs and Border Protection to provide security at border entries. 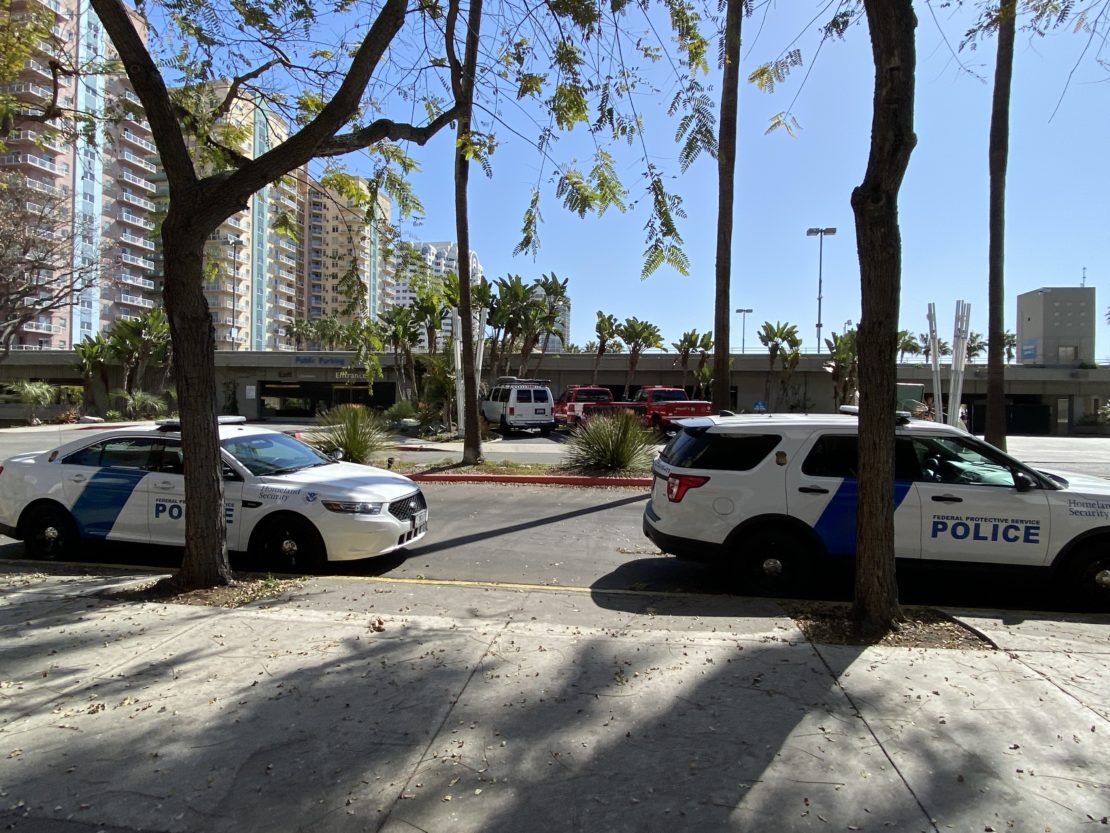 On Wednesday afternoon, two vehicles from the Department of Homeland Security’s Federal Protective Services were parked outside of the Long Beach Arena. Photo by Kelly Puente.

The Convention Center parking lot and front entrance at the Terrace Theater are serving as mass COVID-19 vaccination sites with hundreds of residents and workers arriving each day for vaccines.

However, the Convention Center itself and the Arena have remained mostly empty with the pandemic putting a stop to large gatherings.

It is not clear how much the city would receive from the federal government for use of its facility, nor what type of services or amenities would be required to care for possibly hundreds or thousands of migrant children.

The number of unaccompanied children arriving at the border has increased significantly since the start of the pandemic last year, many of them fleeing violence or poverty in their home countries.

Nearly 5,000 children were in U.S. Customs and Border Protection custody as of Tuesday and an additional 11,551 were in Health and Human Services shelters, according to government officials.

After public pressure for more transparency, the Biden administration for the first time on Tuesday allowed journalists into a Customs and Border Protection detention facility in Donna, Texas, in the Rio Grande Valley, the nation’s busiest corridor for illegal crossings.

The facility was found to be severely overcrowded, with more than 4,000 people, including children and families, crammed into a space intended for 250. The youngest were kept in a large play pen with sleeping mats on the floor.

Most were unaccompanied children processed in tents before being taken to facilities run by the Health and Human Services and then placed with a family member, relative or sponsor.

The children were being housed by the hundreds in eight “pods” formed by plastic dividers, each about 3,200 square feet in size. Many of the pods had more than 500 children in them.

Federal officials are working on creating more long-term facilities to house children and in the meantime are relying on help from cities with large spaces.

Health and Human Services is housing about 2,000 undocumented teenage boys at the Kay Bailey Hutchison Convention Center in Dallas and hundreds of teenage girls at the San Diego Convention Center, who arrived over the weekend.

Federal authorities are also planning for sites in San Antonio, El Paso and other locations.

Staff writer Jason Ruiz and The Associated Press contributed to this report.