The Gerald Desmond Replacement Bridge, which opened to traffic on Monday, is a perfectly fine bridge. It pretty much checks off all the boxes regarding what’s required of a bridge, which is primarily getting cars and trucks from Point A to Point B, when obstacles—in this case the Back Channel in the Port of Long Beach—need to be surmounted.

And the bridge comes with a tremendous amount of extras—bells and whistles, to use engineering jargon—such as beautifully elegant sets of cables pyramiding across the span that can be made increasingly beautiful and elegant at night, thanks to an LED lighting system. It also has a sophisticated set of seismic safety features, including 30-foot-long shock absorbers and new-generation expansion joints. This knowledge made my back-and-forth excursion across the GDRB Monday morning a rare bridge drive during which I didn’t think about earthquakes, other than the fact that I kinda wanted one to see how it all worked in action.

So, as a bridge, it deserves the highest grades for utility and beauty. But it’s a less-than-thrilling bridge. If you’re looking for a jolt of adrenaline, you’re better off with Disneyland’s It’s a Small World attraction.

The new bridge is nothing like its neighbor the Vincent Thomas Bridge, which makes me think incessantly about earthquakes when I’m not concerned about a rogue muscle spasm that would cause me to jerk the wheel of my car and go floating through space before crashing into the harbor 365 feet below just after my final thought being one of regret that the radio is playing Steve Miller’s “The Joker,” which will be stuck in my head through all eternity.

There is no feeling of bridgeness while driving across the GDRB, no sense of feeling like you’re piloting a poorly maintained Piper Cub high above the harbor. 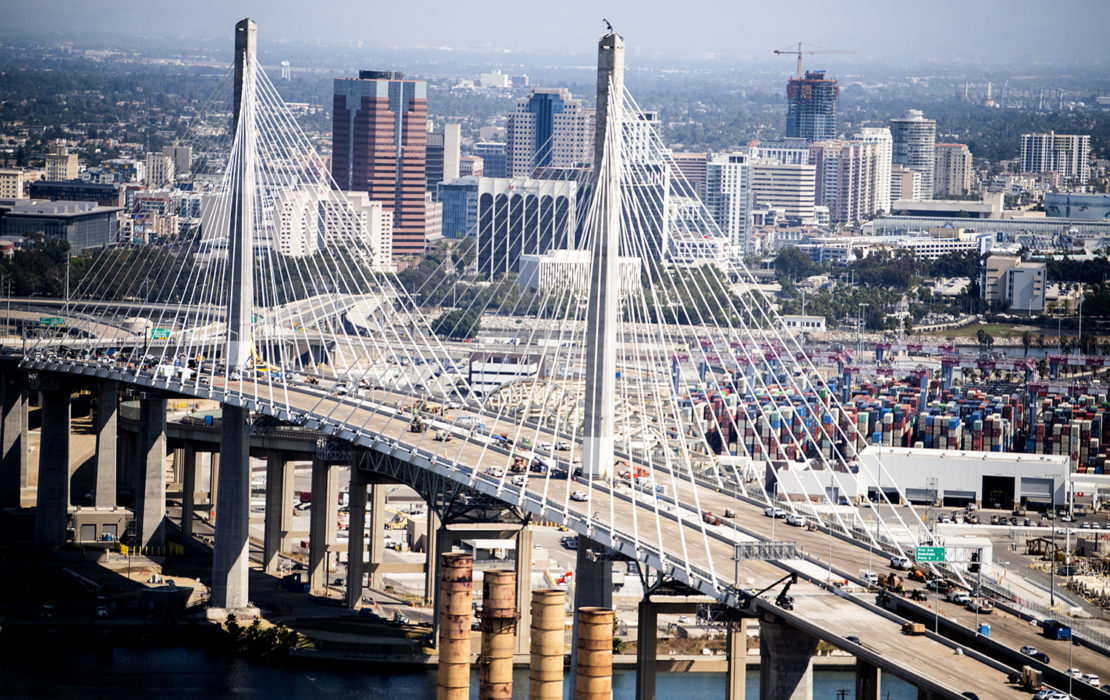 Much of that has to do with the fact that the approaches to (and from) the bridge are no greater than 5% in grade, as opposed to the 5.5-6% that of the regular Gerald Desmond. A point and half doesn’t sound like much, but it is much and the result is an approach that makes it much easier for the drivers of mammoth trucks that will be using it in large numbers coming to and from the port’s ships and container yards.

It’s also wider, with three lanes in both directions instead of two, and driving farther away from the seaside lanes knocks your vertigo right out of the picture.

So, truckers might give the GDRB a high grade, as will the captains and pilots of the increasingly gigantic ships that will easily slip into the harbor beneath it. But, for those of us who demand a little terror from a bridge drive, I’ve got to give the new bridge a B-minus.