Authorities this week alleged that the seven men charged with killing three and wounding nine others during a pre-Halloween backyard party in 2019 may have been motivated by a perceived gang slight, and now their case is headed to trial.

Los Angeles County Superior Court Judge Jesse Rodriguez ruled Friday that there was sufficient evidence for the case to move forward and set a tentative arraignment date of April 2. A date for the trial itself hasn’t been scheduled.

Twelve people were arrested in September in connection with the Oct. 29, 2019 shooting, but ultimately seven people were charged with carrying out the slayings. They are Jeremy Penh, 26; David Heng Long, 20; Joshua Sam, 41; Kaylin Thik, 21; Ryan Sim, 18; Christopher Williams, 29; and Grant Johnson, 36.

They’re each facing three counts of murder and nine counts of attempted murder. They are being held without bail.

This week marked a pivotal hearing in the case against them. Over the span of three days in Long Beach Superior Court, Deputy District Attorney Cyndi Barnes gave a glimpse of the evidence against the seven men. She presented testimony that the shooting seems to have stemmed from a video posted online that “disrespected” the Tiny Rascal Gang, of which all the suspects are accused of being members.

LBPD Det. Ricardo Solorio, who was previously a gang detective for the department, identified all seven men as members of the gang, pointing out that many had tattoos linked to the Tiny Rascal Gang, also known as TRG.

Solorio said that he believes the 2019 shooting may have been prompted by a video that disrespected TRG because the gang world is ruled by “dominance and fear.”

Despite the fact that police say all the victims were innocent bystanders and not gang-affiliated, Solorio said he had no doubt that this shooting was meant to benefit the TRG gang. The people who ended up wounded and killed by the gunfire were simply gathered in a backyard for a co-worker’s Halloween-themed birthday party at the Rose Park home, police have previously said.

The Press-Telegram reported on Wednesday that a possible motive for the shooting was uncovered through testimony of a friend of Penh’s, Timmy Ngoy, who said that Penh had declined to attend the party that night over a perceived slight that Penh had seen in a video of the party’s host, Daniel Chan, allegedly disrespecting TRG.

Ngoy also testified that Penh had called him twice the night of the party, the first time to tell him to “go inside” without an explanation. Ngoy, a co-worker of Chan’s, said he told Chan about the call and the partygoers were told to go inside the house. Ngoy said Penh called him a second time asking why he told everyone to go inside, and then hung up.

On Thursday, detectives shared information from interviews with victims of the shooting who all had similar accounts of what happened the night of the party.

They confirmed that Chan had at some point asked everyone in the backyard to come into the house, offering no explanation. After a period of time that ranged from 10 to 20 minutes, according to the victims interviewed, Chan allowed party guests to return to the backyard.

About three to five minutes later, the shooting started. One victim, Benjamin Ruiz, told detectives he was shot in the right leg and was among 11 others hit by gunfire. 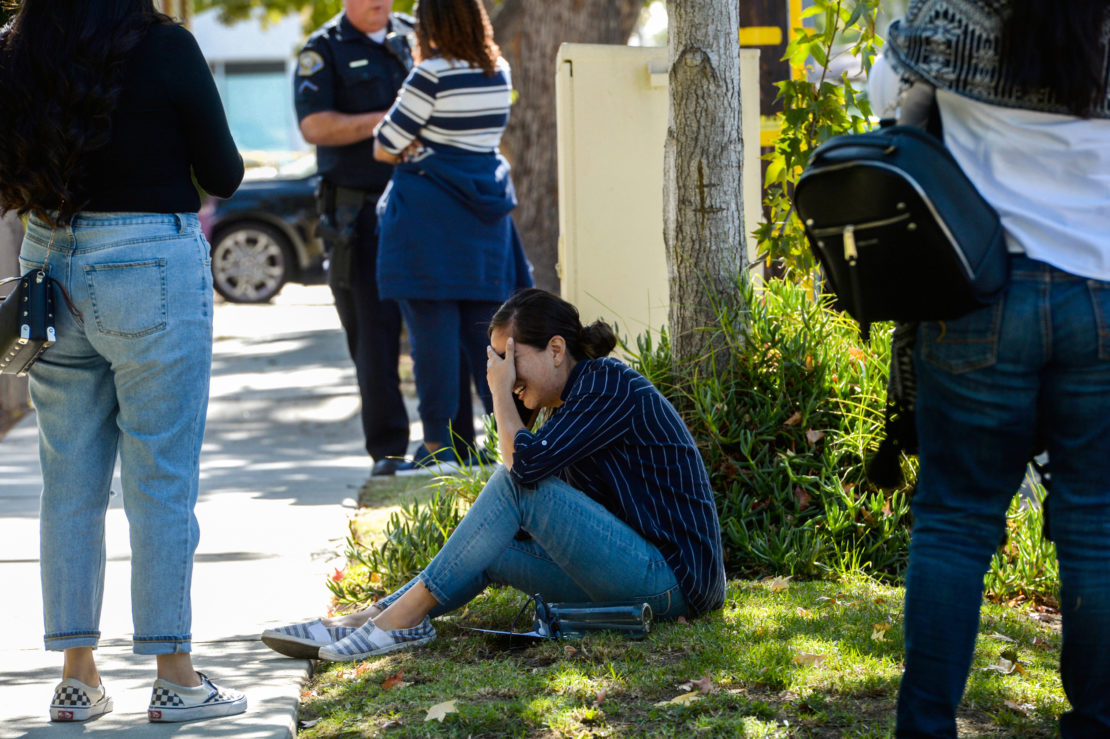 A woman collapses on the grass after speaking with a Los Angeles Coroner’s official at the scene of a Halloween party shooting, where three people were killed and nine injured on Oct. 30, 2019. Photo by Stephen Carr.

Three of the people shot were killed: 25-year-old Maurice Poe Jr., 35-year-old Melvin Williams II, and 28-year-old Ricardo Torres. Nine were wounded, including Jasmine Johnson, who was hit by a bullet that shattered her T-3 vertebrae leaving her paralyzed from the chest down, according to LBPD Sgt. Chris Valdez.

Multiple victims recalled hearing or seeing shots being fired, but none could identify the shooter or shooters. However, DNA evidence introduced by Barnes could tie Thik to the shooting.

An analysis done by the Los Angeles Sheriff’s Department showed that Thik’s DNA could be present on both 9mm and 40-caliber casings found at the scene of the shooting.

Barnes said that on the night of the shooting, surveillance footage captured by an Arco gas station at the corner of South Street and Orange Avenue showed three SUVs gathering and then traveling together down Orange to the party at a house on Seventh Street and Ohio Avenue.

The vehicles belonged to Long and Sam, relatives of Penh, authorities said.

“It was very clear this was a plan that was hatched prior to the incident,” Barnes said. “They drove miles in tandem. [Sam] was wearing his TRG hat. He got out of the car. He was there for the shooting and took people with him back.”

Defense attorneys for the seven men tried a variety of arguments to have the case dismissed for lack of evidence, but those motions were denied by Rodriguez, the judge.

Some argued that jailhouse recordings made by undercover law enforcement agents that may incriminate their clients should be thrown out and that some of the charges should be dropped against some of the defendants because there was no evidence that they participated in the shooting, but were just “lookie-loos.”

Rodriguez also rebuffed those arguments, instead opting to send all seven defendants to trial, where a jury will have to sort out their culpability.

It’s still unclear who actually pulled the trigger that night. None of the suspects were specifically identified as shooters during the three-day preliminary hearing, but prosecutors presented evidence they say shows all were at least present the night of the shooting.

Additional information is expected to be revealed during the trial when jailhouse recordings and hundreds of pages of interviews with some of the defendants could be read into the record.