It was a sad celebration in the skies between Long Beach and Salt Lake City on Tuesday, as JetBlue, a dependable and beloved fixture that’s been running out of Long Beach Airport for two decades, took off from that airport with customers on board for the last time at 7 a.m. before landing in the Beehive State capital at about 9:30.

All I can tell you about Salt Lake City is the floors are brown and Dunkin’ Donuts coffee costs more than it does in California, because I never saw more than a few yards of the state inside the terminal before the plane took off again to make JetBlue’s final landing at LGB.

By noon the plane would put on a couple dozen more miles by flying without passengers to join the fleet of the airline’s planes at LAX, which will, as of Wednesday, be the home hub for the airline, as Southwest Airlines gobbles up most of the slots left by JetBlue in Long Beach.

The departing plane from Long Beach Tuesday morning carried, in addition to about 60 paying passengers, nearly 30 current and recent past employees of JetBlue in Long Beach who wanted to be onboard for the final two legs of the airline’s journey that began in the summer of 2001.

The mood was decidedly one of jet blues, with lots of tears, runny mascara and a good amount of bittersweet laughter as employees swapped memories of their careers in Long Beach.

“It was such a beautiful company in Long Beach,” said flight attendant Melissa De Grazia while milling around with co-workers in the Salt Lake City terminal, waiting for the boarding call back to Long Beach. “A lot of beautiful souls worked there; all the bonds that were made, so many people who have become a permanent part of our lives.”

To be frankly transparent, I made the trip alongside my son Ray, who was a JetBlue employee for nearly 11 years before taking a company buyout after deciding life at LAX wasn’t for him. We’d made many trips together on the airline, to San Francisco, New York and Portland.

On the plane coming back to Long Beach, Rob Land, senior vice president of government affairs for JetBlue (also traveling with his son) talked about some of the airline’s often-fraught history with its host town.

Land, who was involved in the early process of bringing the airline to Long Beach, talked about how it has come to pass that JetBlue is leaving town to bolster its presence in LA.

The city of Long Beach, I think many residents agree, didn’t treat JetBlue well, and Land wouldn’t argue with those people.

“Our terminal was in a trailer, then in a better trailer, and we fought a five-year battle to get the terminal (improvements) built. I think that was all due to JetBlue, and now it’s one of the best airport terminals in the country,” he said.

“It was a long fight and a small minority of people in Long Beach said a nicer terminal would bring in big 747s and huge crowds of people, but we got it built and it hasn’t done that.”

But the bigger fight, and one JetBlue lost, was an effort to bring a customs facility to LGB that would enable the airline to make flights to Mexico and Central and South America.

“And again it was the same people who opposed us for the terminal,” Land said. “And I think it brought out an ugly part of the community, bordering on racism, saying it would be bringing in drugs and gangs.”

Land said he had talked with Long Beach’s councilmembers individually, explaining that the facility wouldn’t cost the airport a cent, that JetBlue would pay for it, and he thought he had the votes for a customs facility. But at the last minute, many of the members who were leaning toward voting in favor of the facility worried about the complainers and they flipped and voted against it by a vote of 8-1, with Dee Andrews being the sole proponent in the end. In particular, Land said, he was “very disappointed in Stacy Mungo. I think she made a bad choice.”

Land said, “I’ve loved our 20 years in Long Beach. but now we’re looking ahead. We’re getting the growth we wanted, and it starts tomorrow at LAX.”

“Long Beach is a magical place, I’ll never forget it,” said Jerome Murray, JetBlue’s general manager at LGB and who will fill the same position at LAX. Murray started his career with JetBlue in airport operations in 2008.

Is he sad to be leaving? He answered with a startlingly quick “yes.”

“I’ll miss the nights on the ramp, the spectacular sunset views, the camaraderie, the feeling of family that was shared with everyone from the police officers to the people who sell snacks in the stores.”

Capt. Tony Sandrolini, who piloted the JetBlue “True Blue” craft on Tuesday, gave a brief history of LGB over the intercom, acknowledging the aviators who have flown into the airport over the years, including Charles Lindbergh, Amelia Earhart, Douglas “Wrong Way” Corrigan and the field’s namesake, Earl Daugherty. “We’re thinking of you today, Earl.”

Landing back in Long Beach a bit after 11:15 a.m., Sandrolini took his passengers on a final lap around the airport, taxiing up to the control tower “to say goodbye to some good friends,” while workers along the runway waved to the passengers in the plane. Outside the airport property, plane-spotters stood on ladders to watch the plane’s final taxi and when it pulled up, at last, to the terminal, it was greeted with more cheering and waving from JetBlue employees and families.

“All right, that’s all she wrote,” said Sandrolini for all the passengers on this final journey to hear. “Good night, George; good night, Gracie.” 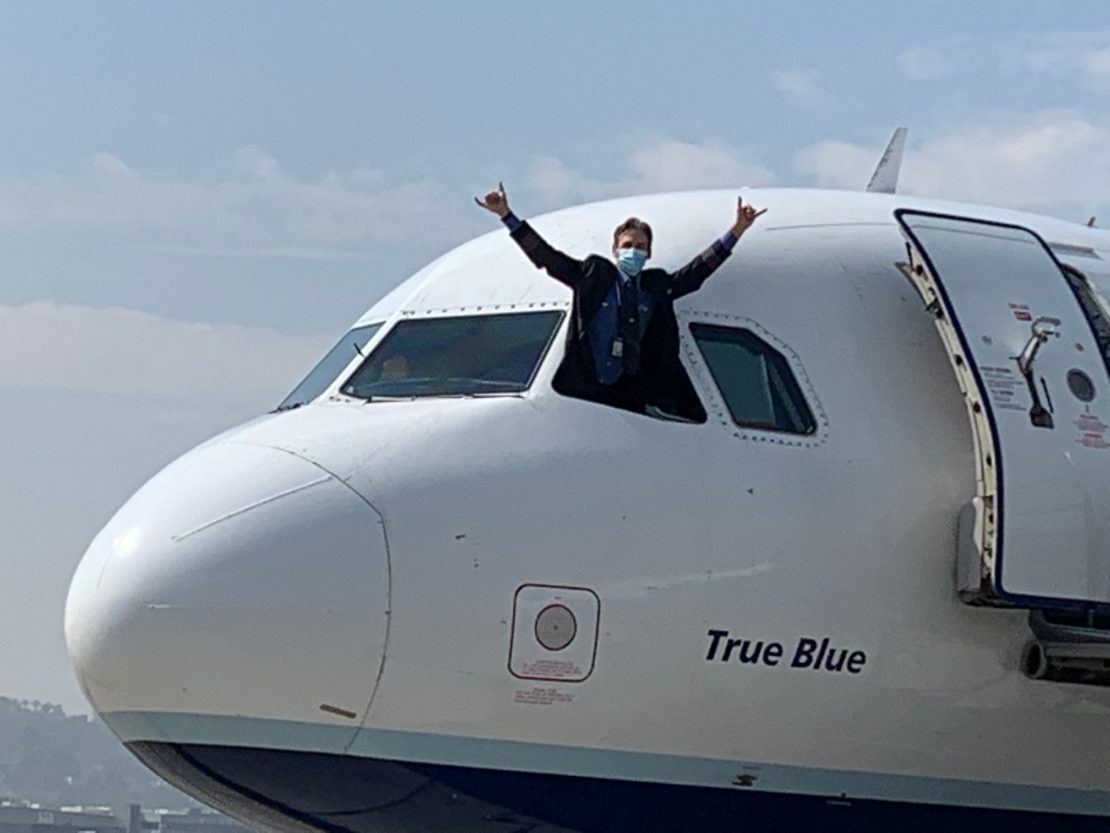