Want to live in the 90803 ZIP? Bring money • Long Beach Post News
- ADVERTISEMENT -
Help us light up the city; Add your home to the 2022 Holiday Lights map. CLICK HERE

This is the second in a series looking at real estate in the city’s different ZIP codes. Read our first one about the 90802 here.

You’re more than likely to want to pick somewhere in the 90803 ZIP code area.

There are plenty of nice and upscale neighborhoods elsewhere in Long Beach—Los Cerritos/Virginia Country Club, Park Estates, the Ranchos in the East End.

But pound for pound, almost everywhere in the 90803 is a great place to live if you can afford it.

And that’s a big “if,” because the median listing home price in October was $1.4 million, just about double the median price in the city overall, where it’s $749,000 (and that would be lower if you factored out the 90803).

The ZIP is basically the land east of Junipero Avenue and south of Third Street running east to the Orange County border, except for when you get to Bellflower Boulevard, where the ZIP stretches north to Seventh Street to take in University Park Estates, Bixby Village and the affordable Belmont Shores Mobile Estates, where somehow people have let the term “Belmont Shores” slide.

But the marquee neighborhoods are Naples and the Peninsula, along with Belmont Shore, lower Belmont Heights and the historic district of Bluff Park, where, to a large degree, you need multiple millions to buy a house you’d like to live in. Even the older two-bedroom, one-bath homes top the million-dollar mark pretty handily. And it’s all for the privilege and prestige of waterfront living and the community feel of the individual neighborhoods and their active homeowner organizations.

The 90803 is, with its western neighbor Downtown’s 90802, one of only two Long Beach ZIP codes on the waterfront, and it makes the most of it, with more water (4.2 square miles) than land (4.0 square miles) and it’s highly recreational water that largely defines its neighborhoods, with not just the Pacific Ocean frontage and the city’s best beaches, but also Alamitos Bay, Marine Stadium, the Naples canals, Los Cerritos Wetlands and parts of the San Gabriel River. That all provides plenty of waterfront living throughout the area.

It’s a highly walkable part of town, particularly around Naples and the Second Street commercial stretch of Belmont Shore with its fine restaurants, bars and shops. People in a shopping mood can also avail themselves of prime spots such as the 2nd & PCH center, Marina Pacifica and the Marketplace, with high-end groceries available at Gelson’s, Whole Foods and a fairly upscale Ralphs.

In terms of real estate, the priciest properties are found along the canals of Naples, or along the Peninsula, where houses are on either the boardwalk-lined ocean side of the narrow area, with infinite views of the Pacific and the western sunset, or the more sedate Alamitos Bay side where you’re just a short hop from the water and more protected from the regular storm surges of the ocean.

Starting off at the low end of 90803 real estate is a cozy two-bedroom, one-bath, sort of Tudor-esque cottage with a bit of a catslide roof leading down to the entryway.

The 1927 home, at 213 Santa Ana Ave. in Belmont Shore is listed by Noelle Longmeyer of Keller Williams at $1.3 million. It’s been thoroughly brought into the 2020s with a new kitchen, bathroom, HVAC, plumbing and electrical. 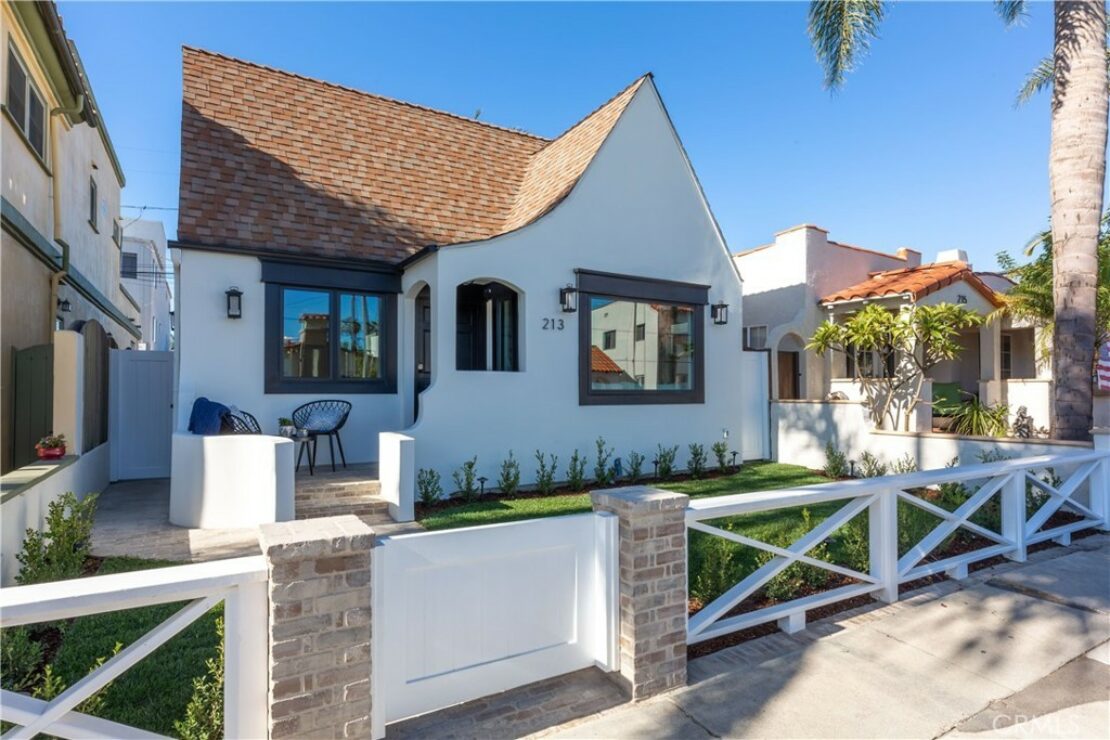 At the low end of homes in the 90803 is this two-bed, one-bath home on Santa Ana Avenue listed at $1.3 million. Redfin photo.

The 964-square-foot home is just a short walk to the Bay Shore Beach and Second Street. In addition to the two bedrooms, there’s also a fully insulated and finished loft, which can serve as a third bedroom, though more likely a guest room or an office. Its square footage is not included in the listed square footage.

Besides the airy and bright kitchen with its new appliances, the house features a fireplace, wood built-ins and a backyard parking pad for two cars, which is no small feature for the parking-impacted Shore.

Jumping up in class and size while diving deeper into your pocketbook, here’s a bit of a Spanish-style mansion up in Belmont Heights at 264 Termino Ave. A nice, downhill hike or bike ride to the pier, and a bit farther to Second Street, a good way to walk off dinner at Nick’s or Saint & Second. 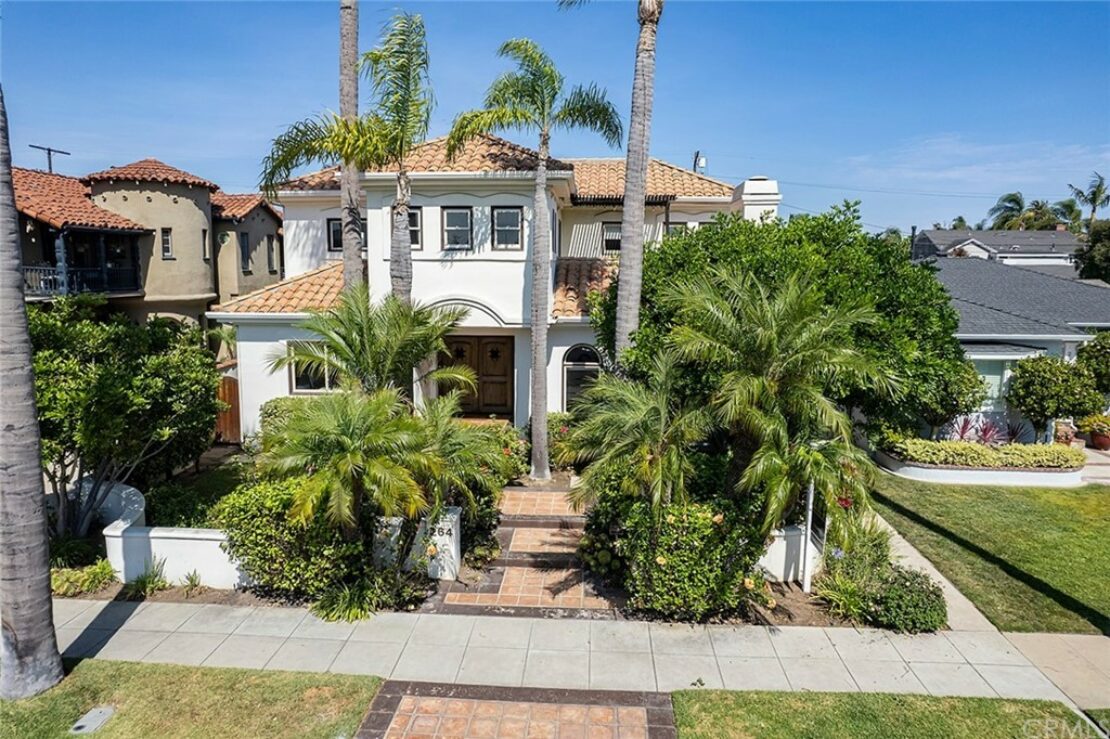 A Spanish-style 4,108-square-foot home on Termino in Belmont Heights is listed at $2.67 million. Redfin photo.

It’s cozy for its expansive size, with fireplaces in both the living room and the family room.

Built in 1990, it’s been well maintained and includes two offices, each with its own bathroom, as well as a large primary suite with a sitting area and a private balcony.

The extra-wide dark wood plank floors contrast nicely with the white rooms downstairs, and French doors lead to a lushly landscaped backyard with an in-ground spa for six to eight people and a patio perfect for entertaining with a built-in barbecue and a bar.

The home is listed at $2.67 million by Crystal Glenning of Compass.

Now, on to Naples, the height of new-money opulence, where the architecture can sometimes be exhilarating and adventurous and sometimes just gaudy and show-offish. This large three-bedroom, four-bath home picks a style—a Mediterranean Revival—and stays with it, obviously from the outside, but also inside, where decorative wrought-iron railings run along the second-floor hallway preventing visitors from falling into the living room below. 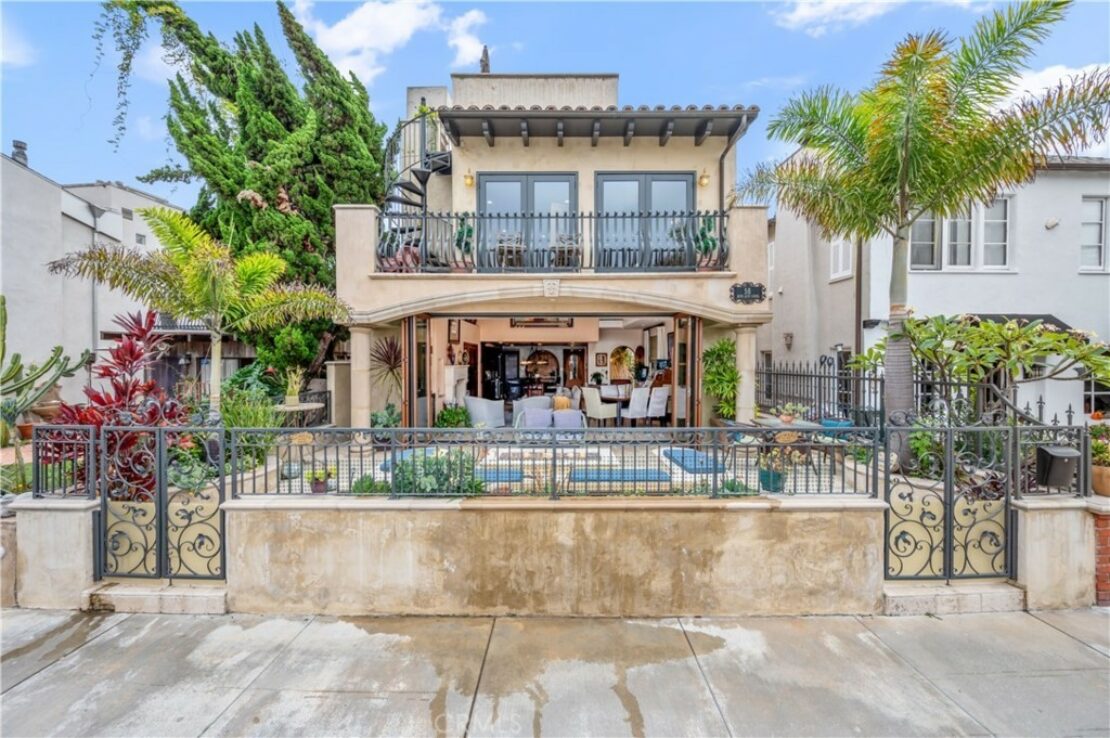 This canalfront home in Naples is listed at $3.75 million. Redfin photo.

It’s not an untoward price for this location and for this particular home. The entry is perhaps the house’s most notable feature, with a front yard entertainment area featuring a firepit and built-in seating that merges with the interior by way of nine-foot-tall glass bi-fold doors opening the entire area into an indoor-outdoor patio. Travertine tile starts at the entry and continues through the first floor that includes the spacious living room with its 16-foot-high ceiling and an equally large kitchen with two islands, Viking appliances and a dumbwaiter for rooftop dining.

The second floor has two of the bedrooms, one ensuite, the other with a walk-in closet.

Also on the second level is the laundry room, a library and a second-floor patio.

The third floor is largely given over to the primary suite with a sunroom and a walk-in closet as well as access to the rooftop deck with an outdoor kitchen, built-in barbecue, beverage refrigerator and a 6-8-person Jacuzzi and fireplace.

It’s pretty close to the pinnacle of properties currently listed in the 90803 ZIP.

As virtually any real estate agent will tell you, waterfront property in Long Beach remains a big bargain compared to that in other cities along the coast of California. While that’s probably true, it doesn’t mean it’s cheap.