There’s little that’s more enjoyable than living on the waterfront with its fresh sea breezes and eternally awesome views. Although that’s just so long as the water behaves itself and doesn’t crawl up to invade your property, potentially destroying it or otherwise making it unusable. That sort of encroachment should be of increasingly greater concern to residents in seashore communities as well as homebuyers hankering for panoramic (and expensive) views of the ocean where worst-case scenarios forecast severe flooding due to sea-level rise caused by climate change over the next few years. And worst-case has become the most likely scenario in the near future because, frankly, little has been done to curb climate change or forestall rising sea levels.

Still, wealthy homebuyers appear to have little concern about the likelihood of sea-rise havoc. Mansions and oversize beach houses in Naples and on the Peninsula remain some of the most coveted properties in Long Beach and Realtors are still moving them at a good clip, especially the somewhat more affordable ones in the under-$2 million range.

When buying any property at all, buyers are urged to conduct due diligence. The extent of that can be merely cursory, especially in a sellers’ market in which the owner of the property for sale can seek waivers of home inspections and other measures a potential buyer might usually expect.

But here’s a bare minimum you can do if you’re looking for a home on the water: Check the listing for the risk factor of the property. Risk Factor, in fact, is the name of the organization that comes up with the likelihood of flood, based on data from scientists, peer-reviewed studies and other sources including data accumulated by First Street Foundation Flood Model a nationwide, probabilistic flood model that shows any location’s risk of flooding from rain, rivers, tides, and storm surge.

But, then, the chances of rising sea levels, even in areas with an extreme risk factor for flooding, don’t seem to have much of an effect on the market, according to Realtors who specialize in properties in Naples and the Peninsula. 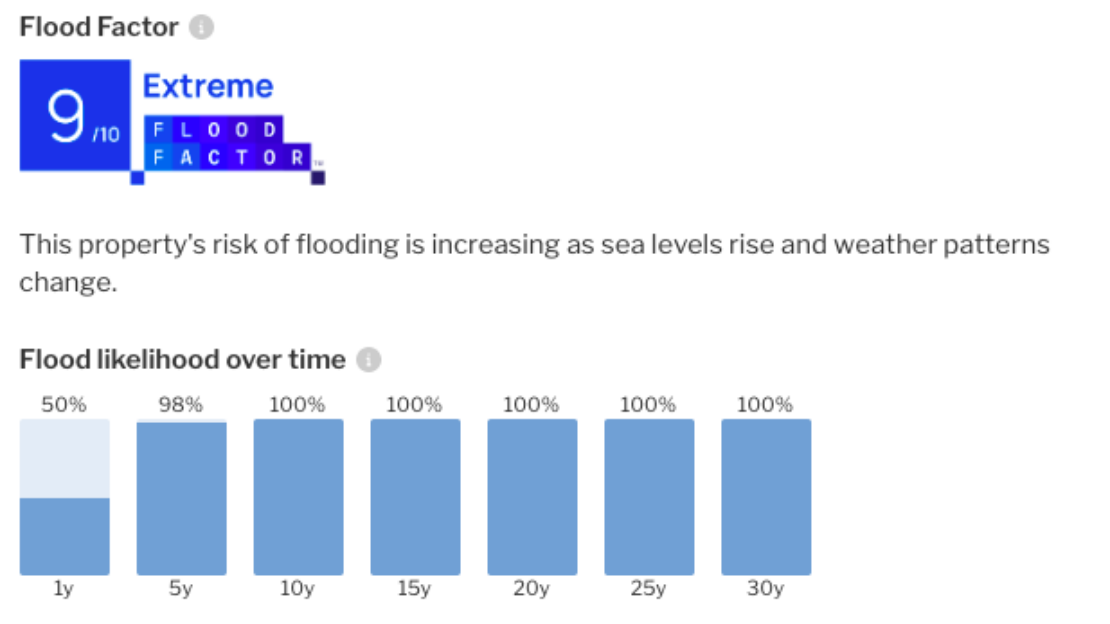 “There’s some concern. People ask a lot of questions, but houses on the Peninsula and Naples are still selling. It’s still a seller’s market,” said Keith Muirhead. He admitted that the price might come down a bit—he has a Naples home in escrow that was listed at $10 million and was reduced to “well into the $8 million mark,” but price cuts aren’t unusual when you get above the $3 million point.

“And anyway,” said Muirhead, “where on the California coast can you buy a house on the beach for these prices?”

There are a couple of homes on the Peninsula’s boardwalk on Seaside Walk, both with spectacular and unimpeded ocean views from Palos Verdes down past Huntington Beach. Unimpeded, that is, from second and third floors, with ground floor views being somewhat disturbed by the sand berm the city puts up to protect the residences. And you thought you had problems. 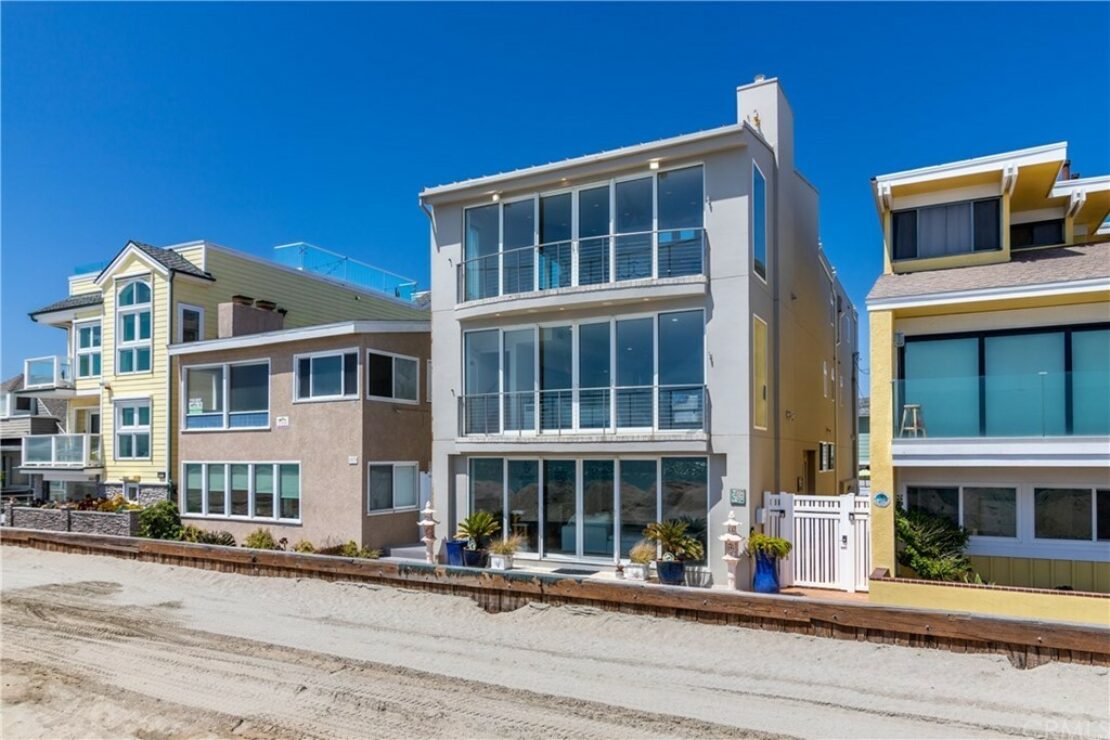 This home on Seaside Walk is new on the market and listed for sale at $5 million. Photo courtesy of Spencer Snyder.

One home that’s new on the market and listed by Snyder is at 6519 E. Seaside Walk. The four-bedroom, six-bath house weighs in at 4,880 square feet with a $5 million price tag (I exaggerate: $4,999,000). It’s literally steps from the beach and a few more to the water’s edge. It has tons of windows, as you would hope and expect with its views from the living areas and, well, from everywhere except, perhaps, from the 1,600-bottle-capacity wine closet. It’s got an ultra-professional kitchen, decks for entertaining or sunbathing and a flood-risk factor of 9 out of 10. Furthermore, due to placement in a high-risk FEMA flood zone, flood insurance is required to obtain a mortgage from a federally regulated or insured lender, though you can always pay cash, which isn’t unusual among big-ticket buyers. 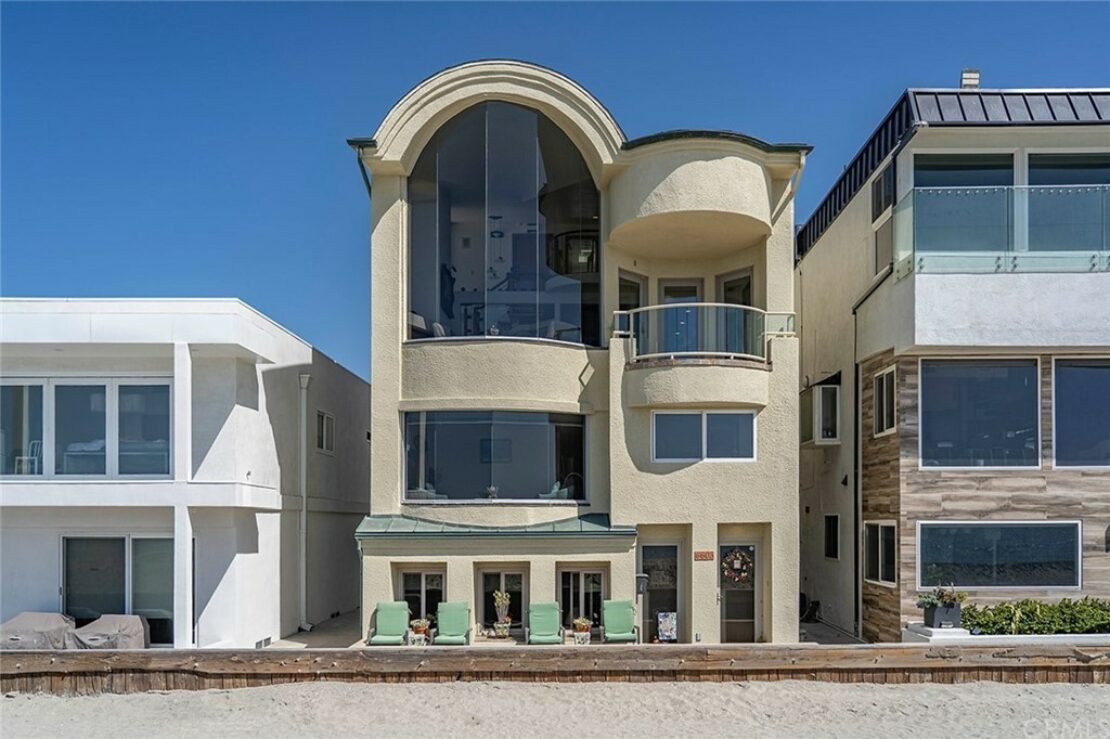 This home at 6605 Seaside Walk is on the market with a listing price of $4.5 million. Redfin photo.

Another beautiful property is just down the boardwalk at 6605 E. Seaside Walk. This towering, three-story, 4,600-square-foot home, listed by Realtor Crystal Glenning, has six bedrooms and eight bathrooms, though some of those are taken up by a three-bed, three-bath luxury apartment on the ground floor (sorry about the berm), which you can rent out for a tidy sum, or use it to store additional relatives. The upper floors are pretty spectacular and let’s go ahead and stipulate that it has fantastic views.

Again, this one has a flood-risk factor of 9, which should perhaps be of chief concern to the lower-floor apartment dwellers. I wouldn’t sign a 10-year lease.

As dicey as our waterfront homes have it, it could be worse. My cousin Ed asked me how, when I wrote a column about real estate in Long Beaches in other states, could I have missed Long Beach Island, New Jersey. The answer is, simply, I don’t know. And LBI, like our own Peninsula, is a spectacular place to live, so far. The barrier island is 18 miles long, but you can throw a volleyball across its width, and it’s currently littered with flood-risk-factor-9 homes, with a median price of $2 million.

What kind of properties are for sale on the island now? More like, what isn’t for sale now. Take a look at the offering on LBI on Zillow now: 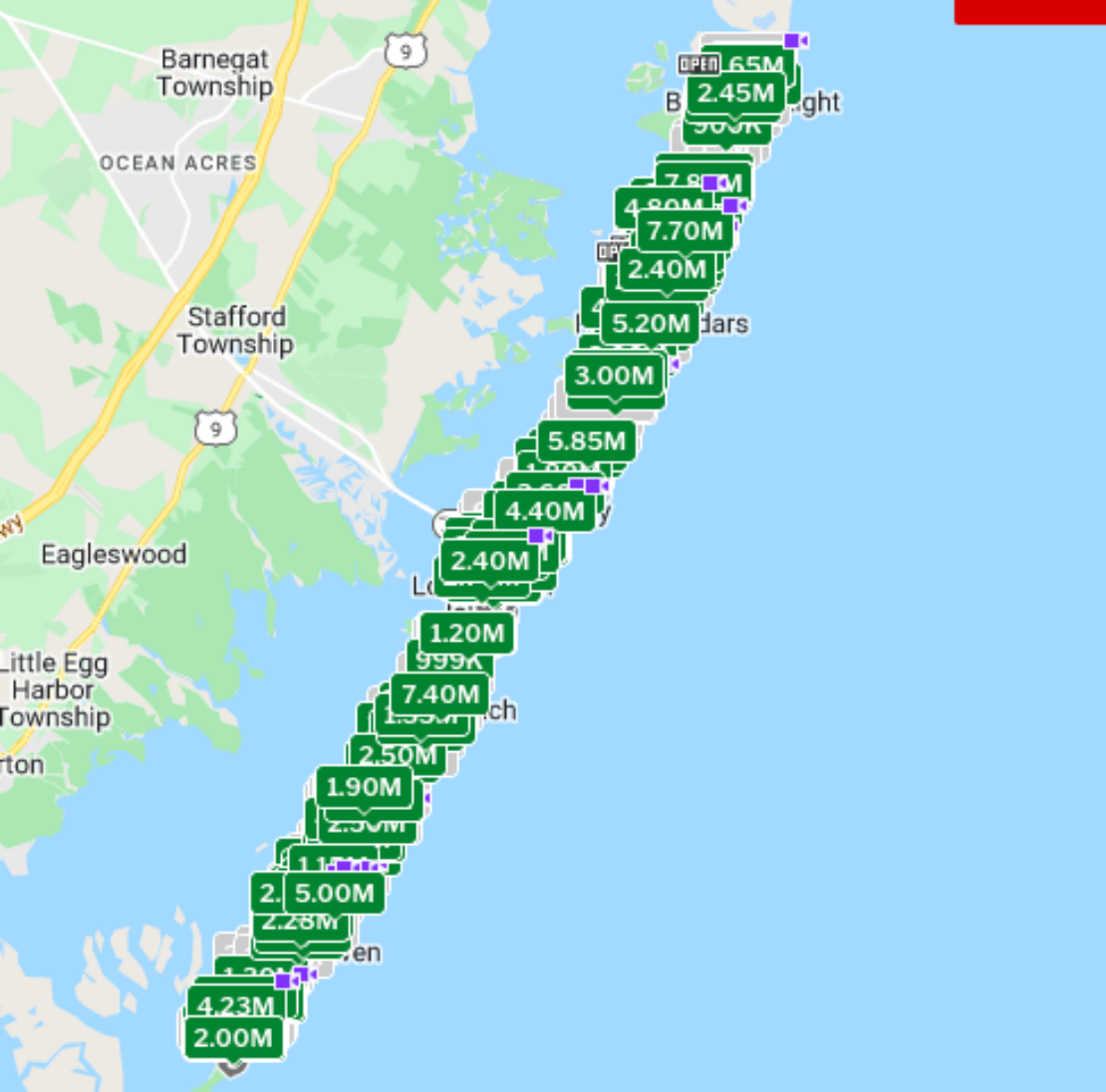 ‘Water always wins’: The most expensive parts of Long Beach are most vulnerable to rising seas