On Sunday night, Tharith Tan watched one of 4 looters swing a sledgehammer at his jewelry store displays through security footage on his phone. He rushed to the store to board up his windows as neighborhood friends stood by to protect the store.

The looters took expensive tools and damaged his showcases.

“I was shaking for like 2 days,” Tan said. “Even talking about it now is giving me anxiety.”

Tharith Than, 40, stands in front of his boarded-up jewelry business which was looted Sunday in Long Beach Wednesday, June 3, 2020. Photo by Thomas R. Cordova.

Though most of the attention has been focused in the Downtown area, the looting and destruction during Sunday night’s unrest spread to other parts of the city, including the Anaheim Corridor, home of Long Beach’s Cambodia Town. The mostly low-income, working class community already struggled financially amid coronavirus shutdowns of businesses, and Sunday’s looting and vandalism kicked the community when it was already down.

Nancy Nguyen, 40, owner of Nails U Love, had prepped her nail salon to abide by social distancing regulations for a reopening in the near future. Then Sunday night happened.

“I put everything in this salon,” Nguyen said. “…It makes me so sad.”

Nguyen estimates it would cost between $5,000-$10,000 to repair damages and replace equipment.

For Jerry Theng, owner of LB Jewelry Supplies, looters cost him between $100,000 to $200,000 since they took jewelry, tools and musical instruments. He said that he and other owners are just innocent small businesses and don’t understand how people would loot them. “It’s horrible,” Theng said.

Tan said it “infuriates” them to know that wealthier areas like Bixby Knolls had barriers to protect the businesses—though the barriers were put in place there on Monday, not Sunday, and up to 20 businesses in Bixby Knolls were also vandalized. Police confirmed that protective barricades were placed in Belmont Shore on 2nd Street from Livingston Drive to Bayshore Avenue on Sunday.

“We feel underrepresented in this area,” he said. “We felt so alone.”

Linda Reach, 33, a security guard who patrols the plaza of Nails U Love, said she called the police, but they swamped with calls in other areas. Police have said calls for service were more than triple what they normally receive.

The Public Works Department placed barricades in some parts of the city so that officers could respond to other areas that were seeing more problems, Arantxa Chavarria, a spokeswoman for the Police department, said. At the time, police were trying to respond to over 4,000 calls Sunday night.

Executive Director for the Midtown Business Improvement District Monorom Neth said he couldn’t sleep that night. Neth and Reach emailed each other in the middle of the night to organize a cleanup the next morning. Dozens of people showed up to help clean. 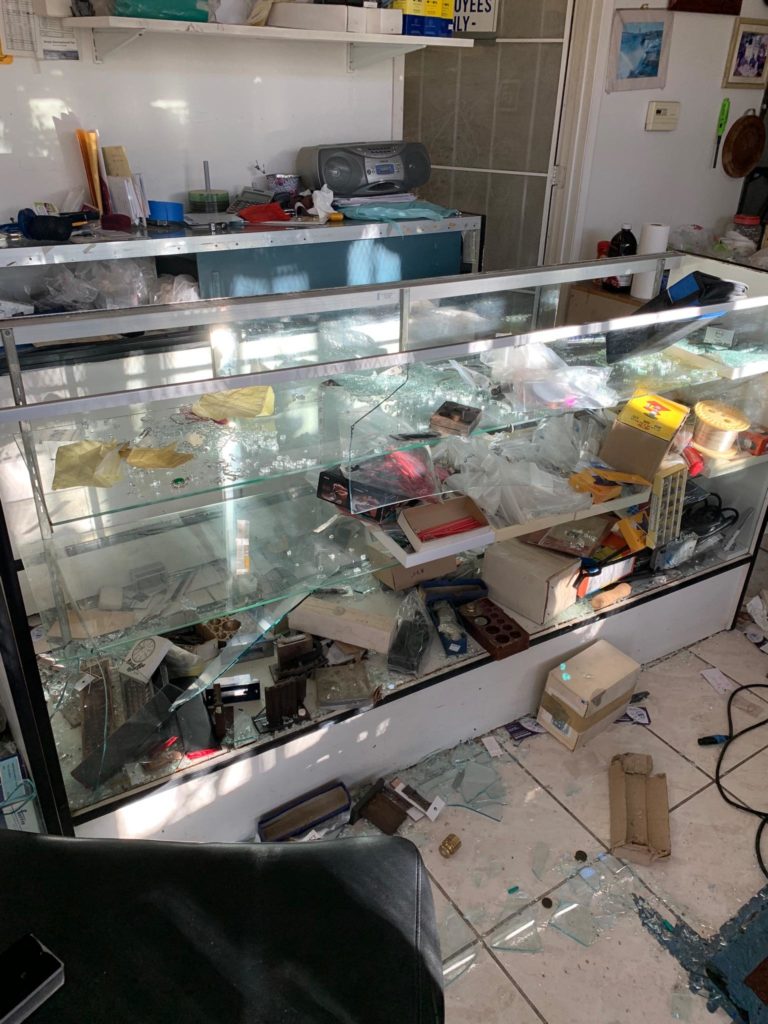 A shattered showcase and items are thrown all over Jerry Theng’s jewelry store which was looted Sunday in Long Beach Wednesday, June 3, 2020. Photo Courtesy of Jerry Theng.

“Everything in that safe was not really as valuable as those people,” Tan said in reference to those who helped in the aftermath. “Those are the gems that we like to collect.”

So far, Long Beach resident Malyanne Bunma, 26, wanted to help immediately and started a GoFundMe page that has raised $60,000.

“I literally thought this was going to raise $500,” she said.

Bunma and Neth met to assess the gravity of each business’s loss, and Bunma said they plan to distribute the donations on a case-by-case basis instead of an equal distribution since some businesses suffered more financial losses than others; they will also base this on the insurance coverage.

Neth said that businesses are still assessing the damages.

After living through Sunday’s unrest, some of the owners had flashbacks to the 1992 L.A. riots. Theng recalls trying to protect his sister. Tan noticed something else.

“As I was boarding up those windows, in the frames of the windows, there were holes from the previous times where we had to board them up in 1992.”