Why so many unaccompanied minors are arriving at the southern border—and soon, in Long Beach • Long Beach Post News
- ADVERTISEMENT -

Up to 1,000 migrant children are expected to be held in Long Beach over coming weeks and months, a small percentage of the tens of thousands of unaccompanied minors who have arrived in the U.S. since last summer.

So many people have been arriving that the federal government approached San Diego, Dallas and other cities to help provide shelter for migrants packing facilities near the U.S.-Mexico border.

Tonight the Long Beach City Council will consider leasing its convention center to the Department of Health and Human Services for up to 120 days to house up to 1,000 children, with the government paying for use of the building, along with food, recreation, education and other services.

What led to this situation?

While Mexican nationals still make up the largest number of migrants apprehended at the border, Honduras and Guatemala play a significant role in this year’s increase of migrants, including those under the age of 18.

As of February, 121,000 citizens of both countries had been apprehended at the border, 16,000 of them unaccompanied minors.

The driving force behind the most recent influx of arrivals is still unclear, and often a matter of debate. While Republicans have blamed the new administration of President Joe Biden for the sharp increase, Democrats have pointed to the beginning of the increase during the Trump presidency last year, as well as a large uptick in the summer of 2019, to disprove that point.

Lauren Heidbrink, an assistant professor at Cal State Long Beach who researches the migrations of Central American children, said the influx of refugees is a policy-made humanitarian crisis that spans many administrations.

“Many parents are making the difficult choice of sending their children to cross the U.S. border alone rather than remain in Mexico under dangerous circumstances,” Heidbrink said.

In general, violence, extortion and forceful recruitment by gangs—which trace their roots back to the streets of Los Angeles—are the main driver of migration from Central America’s Northern Triangle, which comprises El Salvador, Guatemala and Honduras.

This is especially true for teenagers, who are often the target of street gangs looking to grow their membership. In addition, women and girls report high rates of sexual violence, from gang members and others.

Minors have more rights than adults

In fiscal year 2020, approximately 72% of all children referred to the Office of Refugee Resettlement, which assumes responsibility over unaccompanied minors shortly after their arrival, were over 14 years of age and 68% were boys. A majority of the young arrivals were from Guatemala, followed by Honduras and El Salvador.

Minors arriving at the U.S. border have rights not awarded to adult migrants and asylum seekers, including accommodation in an environment that is less restrictive than adult detention centers, such as the facility proposed in Long Beach.

After the coronavirus pandemic slowed migration around the world last March, the number of migrants apprehended at the southern border immediately began to climb again one month later.

Meanwhile, many asylum seekers who made it to the border during that time found themselves locked out as a result of two Trump-era policies.

The Stay in Mexico policy, put in place during a sharp spike in migrant arrivals in 2019, meant that asylum seekers and other migrants were placed on waitlists before their cases would be heard by U.S. immigration authorities. They often waited in squalid conditions and at risk of violence or extortion on the Mexican side of the border.

The backlog in cases was exacerbated when U.S. immigration authorities began returning those seeking entry into the country, for example to claim asylum, without an opportunity to make their claim—citing the health risks of admitting them to migrant detention centers during the coronavirus pandemic.

In February, apprehensions at the border returned to levels last seen in mid-2019, with Border Patrol apprehending nearly 100,000 people in the span of just one month, according to data released by U.S. Customs and Border Protection.

While data for March has not yet been released by the agency, reports of high numbers of migrants and asylum seekers at the border continue.

In 2019, Border Patrol apprehended nearly one million migrants attempting to cross the border into the United States. Just over 80,000—or 8.4%— were minors arriving without their parents. In just the first two months of this year, nearly 30,000 unaccompanied minors had been taken into custody by Border Patrol, making up 7.5% of the total number of migrants agents encountered.

In late March, the Biden Administration for the first time allowed journalists inside a crowded detention facility in Donna, Texas, in the Rio Grande Valley, a facility that has a capacity of 250 but was housing up to 4,100 people. Children and families were placed into pods and the youngest were kept in a large playpen with mats on the floor for sleeping. 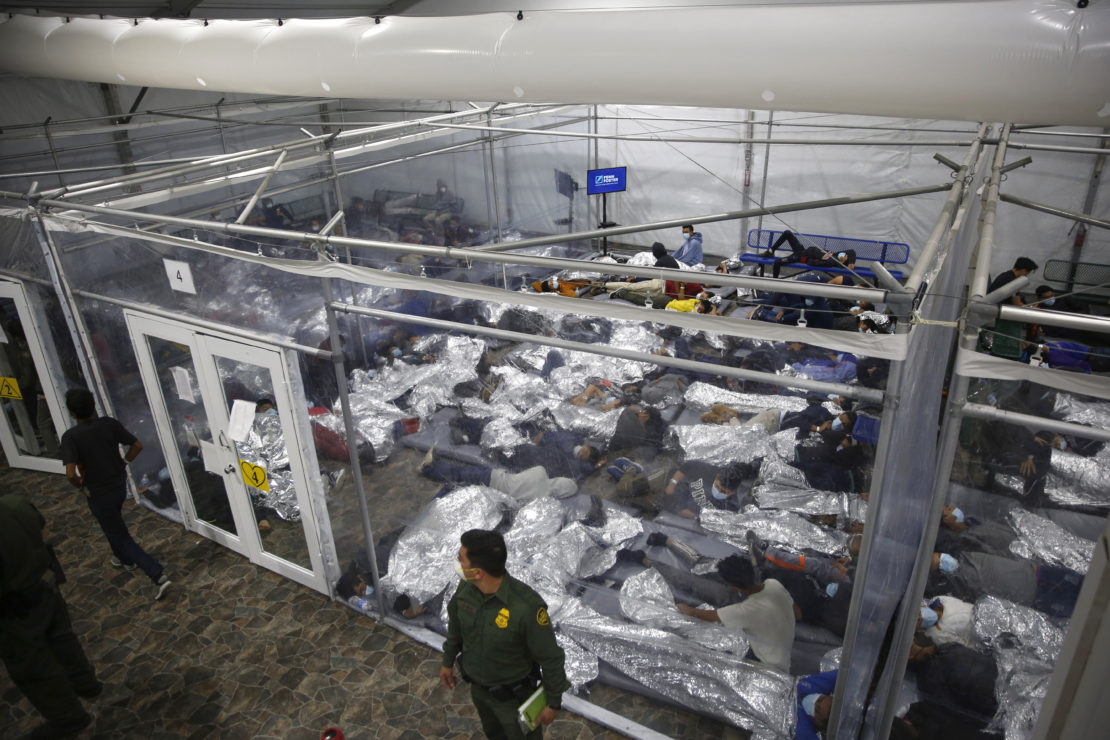 What happens to the children when they arrive?

Per U.S. Immigration and Citizenship Services definition, unaccompanied minors are those younger than 18, who have no parent or legal guardian in the United States. This determination is made at the border and may exclude undocumented parents or family members already living in the country unbeknownst to immigration authorities at the time of designation.

The Flores settlement, a 1997 settlement governing the treatment of minors in immigration proceedings, requires that unaccompanied minors be transferred into the custody of the U.S. Department of Health and Human Services, specifically, the Office of Refugee Resettlement, within 72 hours of being identified as “unaccompanied.”

Once minors are in their custody, the department attempts to locate suitable sponsors. According to the department, those sponsors are almost always parents or close relatives.

To deal with immense fluctuations in arrival numbers, the office maintains a mix of “standard” beds that are available year-round, and “temporary” beds that can be added or reduced as needed.

There are currently 14,287 minors in the care of the Health and Human Services department, according to a recent statement. The average time of stay at one of the facilities operated by the office is 37 days, according to the agency.

The program’s numbers are a testament to the unprecedented influx of unaccompanied minors over the past decade.

For the first nine years since the responsibility to care for unaccompanied minors was transferred to the office, there were fewer than 8,000 children in the program annually. Since 2012, that number has jumped dramatically. In fiscal year 2020, the Department of Homeland Security referred 15,381 minors into the care of the office.

If approved as a temporary site, the Long Beach Convention Center may house up to 1,000 minors in the program until August.